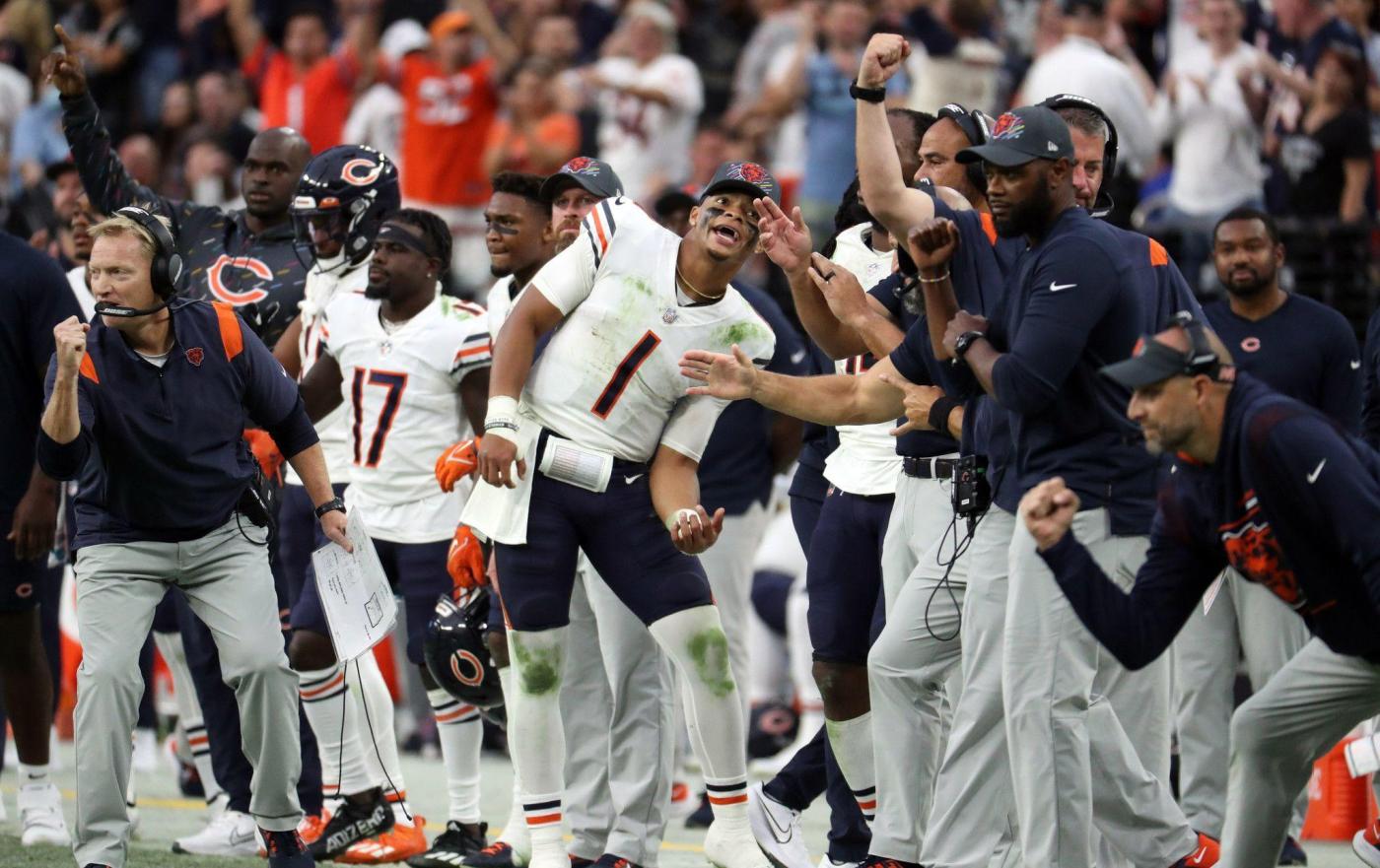 Michael Vick was on an airplane Sunday afternoon when he got a text message from a friend and learned he was trending on Twitter.

That’s when Vick discovered that, along with racing past Miami Dolphins defenders at Soldier Field, Chicago Bears quarterback Justin Fields was sprinting past Vick in the NFL record book.

Fields ran for 178 yards in the 35-32 loss to the Dolphins, the most in a regular-season game by a quarterback, eclipsing Vick’s mark of 173 set in Week 13 of the 2002 season in an Atlanta Falcons victory at Minnesota.

The San Francisco 49ers’ Colin Kaepernick rushed for 181 yards in a 2013 playoff game. The NFL differentiates between regular-season and postseason records.

“It is always bittersweet when those records get broken,” Vick said Monday, “but that’s what it is all about — the next generation doing it just a little bit better.”

Along with passing Vick’s league record, Fields eclipsed the Bears mark for rushing yards by a quarterback in a game. Bobby Douglass ran for 127 yards in the 1972 season finale at Oakland.

“You always want to hold a record for a while,” said Douglass, who had it for nearly a half-century. “I just wish I had a little more opportunity to play in a more wide-open offense. I’m not saying I’d have a lot of 178-yard games, but I could run. It would be fun to play today.”

The NFL changes a little more each season, and Fields was one of six quarterbacks to lead his team in rushing in Week 9. It’s only the fifth time that has happened in the Super Bowl era, according to SI.com.

Some of the quarterbacks joining Fields on the list are legitimate dual threats such as the Buffalo Bills’ Josh Allen (86 yards), the Kansas City Chiefs’ Patrick Mahomes (63) and the Arizona Cardinals’ Kyler Murray (60). Two were functions of being in bad offensive games: the Green Bay Packers’ Aaron Rodgers (40) and the Indianapolis Colts’ Sam Ehlinger (39).

Entering Monday night, Fields was 10th in the NFL in rushing with 602 yards, on pace for 1,137. Seven quarterbacks are in the top 42 in rushing: Fields, Jackson, Allen, the New York Giants’ Daniel Jones, Murray, the Philadelphia Eagles’ Jalen Hurts and the Falcons’ Marcus Mariota.

“It’s great to see quarterbacks getting into the mix. Every two or three possessions, you are seeing a designed quarterback run. I never thought the game would be this way. It’s a treat to watch these young guys go out there and do it and have success.”

The surge in quarterback runs is putting stress on defenders, especially pass rushers who have to be cognizant of their rush lanes and players on the back half who are challenged to make open-field tackles against big, strong, physical runners such as Fields and Allen.

In the ebb and flow of strategy, the question is what will defensive coaches create to combat the continued expansion of quarterback runs. When a pass rush is well-executed, coverage is tight across the board and the quarterback snakes his way out of the pocket and is gone for a 61-yard touchdown — as Fields did in the third quarter Sunday — it’s exasperating for defensive minds.

“You’re not seeing as many Tom Brady-type quarterbacks sitting in the pocket,” Douglass said. “You’re seeing an athletic guy sitting in the pocket and then scrambling. So it’s an advantageous thing if you have one of those guys. I think Fields is right up there with the top guys that are going to be able to do that for a long time.”

The league has been trending to smaller, more athletic linebackers such as ex-Bear Roquan Smith to help defend against the pass. Defensive fronts can’t get much smaller and quicker without risking being overrun by traditional running games.

“It’s putting a lot of stress on defensive coordinators,” Vick said. “These guys for years were just accustomed to rushing the passer. Now you’ve got to rush the passer and defend a running quarterback. Defenses have to work harder and be more ready. The dynamic of the game is changing.”

Said Douglass: “I am one of those guys that thinks quarterbacks need to run and use their athleticism, and (Fields) is about as good as any of them right now. Similar to Vick maybe. Vick was kind of like me. We could make a lot of yards by scrambling and using our ability to run.

“Justin is probably further along in the passing side, which all of us have to be able to throw the football too. He’s further along than certainly I was or even Vick was with the type of offense he ran in college.”

Vick progressed as a passer throughout his career and was maybe at his best for the Eagles in 2010, when he threw for 3,018 yards with 21 touchdowns and only six interceptions in 12 starts.

Fields has been more efficient the last three games, completing 47 of 72 passes (65.2%) for 453 yards with six touchdowns and only one interception while also rushing for 320 yards and three scores. He has topped 200 passing yards in only one game this season, the Week 5 loss at Minnesota.

Fields has 408 rushing yards since Week 6, and only three running backs are ahead of him in that span: the Jacksonville Jaguars’ Travis Etienne (465), the Tennessee Titans’ Derrick Henry (462) and the Seattle Seahawks’ Kenneth Walker (424).

The Bears ran for 252 yards against the Dolphins, the fourth consecutive game they’ve rushed for at least 225. The only other team to accomplish that feat in the Super Bowl era is the 1976 Pittsburgh Steelers.

“I have watched Fields play about five or six games,” Vick said. “I see him growing and getting better each and every week and playing with a lot of confidence. I see the guys rallying around him, and they don’t always get the results they want but that is certainly a team that has a lot of room to grow.

“Justin is only going to get better.”