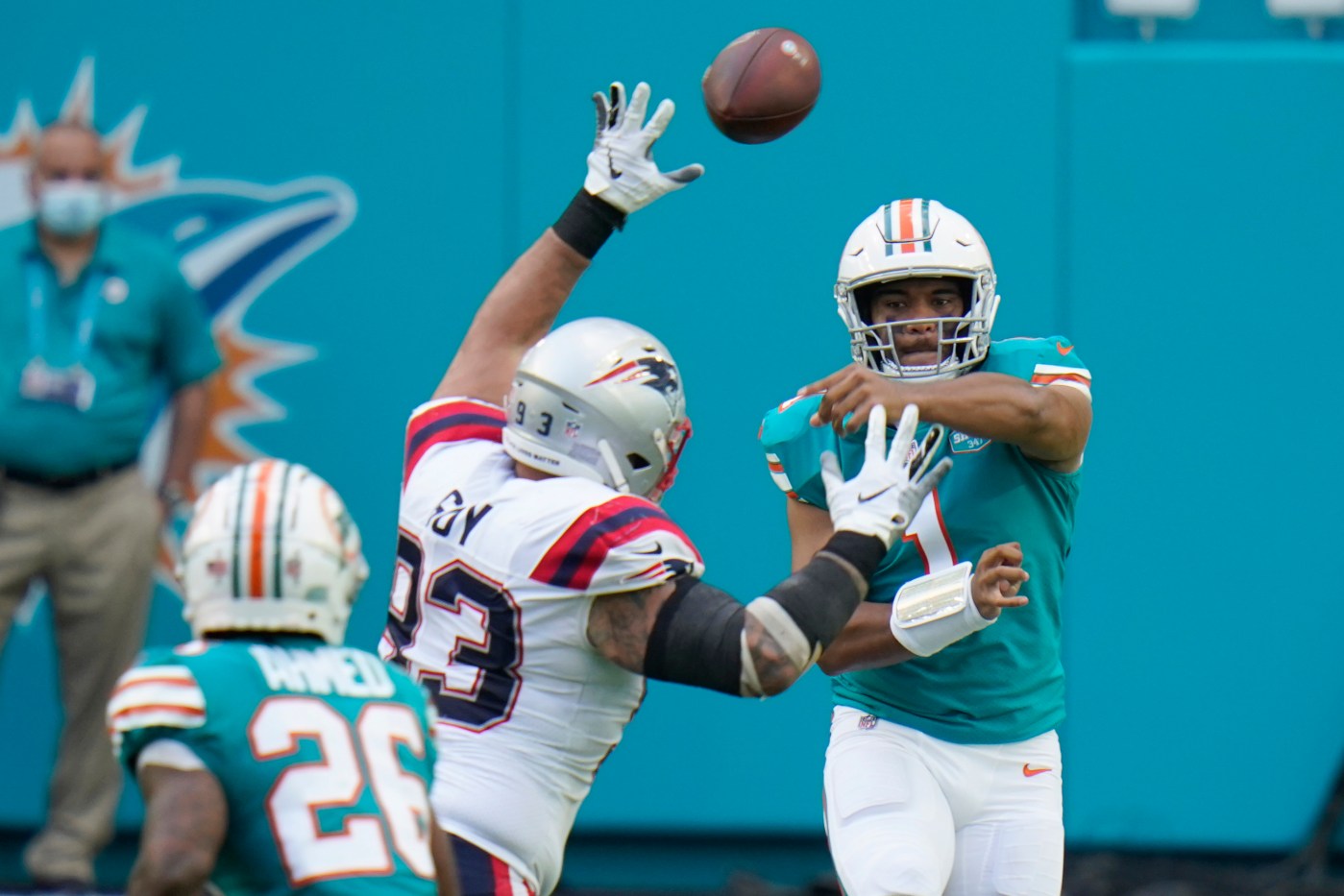 WEST PALM BEACH, Fla. — Between the lines is where the Patriots and Dolphins will settle their latest division spat Sunday afternoon in Miami.

Until then, between the lines is the only place where the Patriots’ true feelings about Dolphins quarterback Tua Tagovailoa can seemingly be found.

For a team that tosses verbal bouquets to opponents like they’re hurting for self-esteem, the Pats have been reticent this week when it comes to Tagovailoa. Every public comment made by a Patriots coach or defender in South Florida has tied the quarterback’s impact or ability to his surroundings.

“Productive player, knows how to use his weapons, receivers, backs,” Bill Belichick began before Wednesday’s practice.

Now, Tagovailoa is 3-0 versus Belichick, a statistic that captures Miami’s recent success as well as it captures the problem in using a quarterback’s win-loss record to measure performance. Against the Patriots, Tagovailoa’s production has amounted to 456 passing yards (152 per game), two touchdowns, two interceptions and a passer rating of 81.9, his fourth-lowest against any opponent.

But did he look different in the preseason, now playing for first-year head coach and supposed offensive whiz Mike McDaniel?

“I’d be making stuff up if I said — taking a whole season and then … eight drives in the preseason — it’s been the same or different. He’s a young football player,” Patriots captain Devin McCourty said Thursday. “Like, he’s going to keep getting better, he’s going to keep working on things. Obviously it’s better than what it was last year.

“But I think you’re watching a guy in a new offense do things. Seems to be playing very confident. He has no reason not to be confident playing against us.”

Pro Football Focus graded Tagovailoa’s preseason performances among the best by any quarterback across the NFL. Last year, PFF marked his Week 1 showing in New England as below average. That night, the Patriots fumbled away their chance at victory when Damien Harris lost the ball inside the red zone with less than four minutes to play.

While the Pats defense failed to force an ensuing punt, allowing Tagovailoa to run out the clock on a 17-16 win, one starting defender seemed to scoff at the young quarterback, who had thrown a bad fourth-quarter interception. Scurrying away from pressure, Tagovailoa heaved a desperate pass down the right sideline that found Jonathan Jones.

“That’s what Tua do. If he doesn’t have his first read, he’s just gonna throw the ball up,” said the outspoken J.C. Jackson, a former Patriots corner. “And that’s when we capitalize on defense, when he makes mistakes like that.”

Four months later, after a 33-24 Miami win over the Patriots, PFF graded Tagovailoa’s performance as a tick above average. Staving off a late Pats comeback with 2:53 left, he ripped a 15-yard completion to start his final drive, a pass that moved the chains and kept the clock moving. Later, he covered 11 yards on a third-and-8 scramble that effectively knocked the Patriots out.

“He can hurt you with his arms or his legs,” Pats cornerback Jalen Mills noted Thursday.

Mills certainly seems to be putting stock into Tagovailoa’s preseason tape. In two games against the Raiders and Eagles, he went 12-of-15 for 179 yards, one touchdown and no picks. Against Philadelphia, he went a sparkling 6-of-7 for 121 yards, including a 51-yard bomb to new All-Pro speedster Tyreek Hill, whose arrival followed free-agent additions Terron Armstead, another All-Pro, and wide receiver Cedrick Wilson.

“He looked pretty sharp in that preseason game. I’m not gonna lie,” Mills said. “He had some pretty good passes, throwing ropes. … I think he’s been coached really, really well.”

Hats off to his coaches.