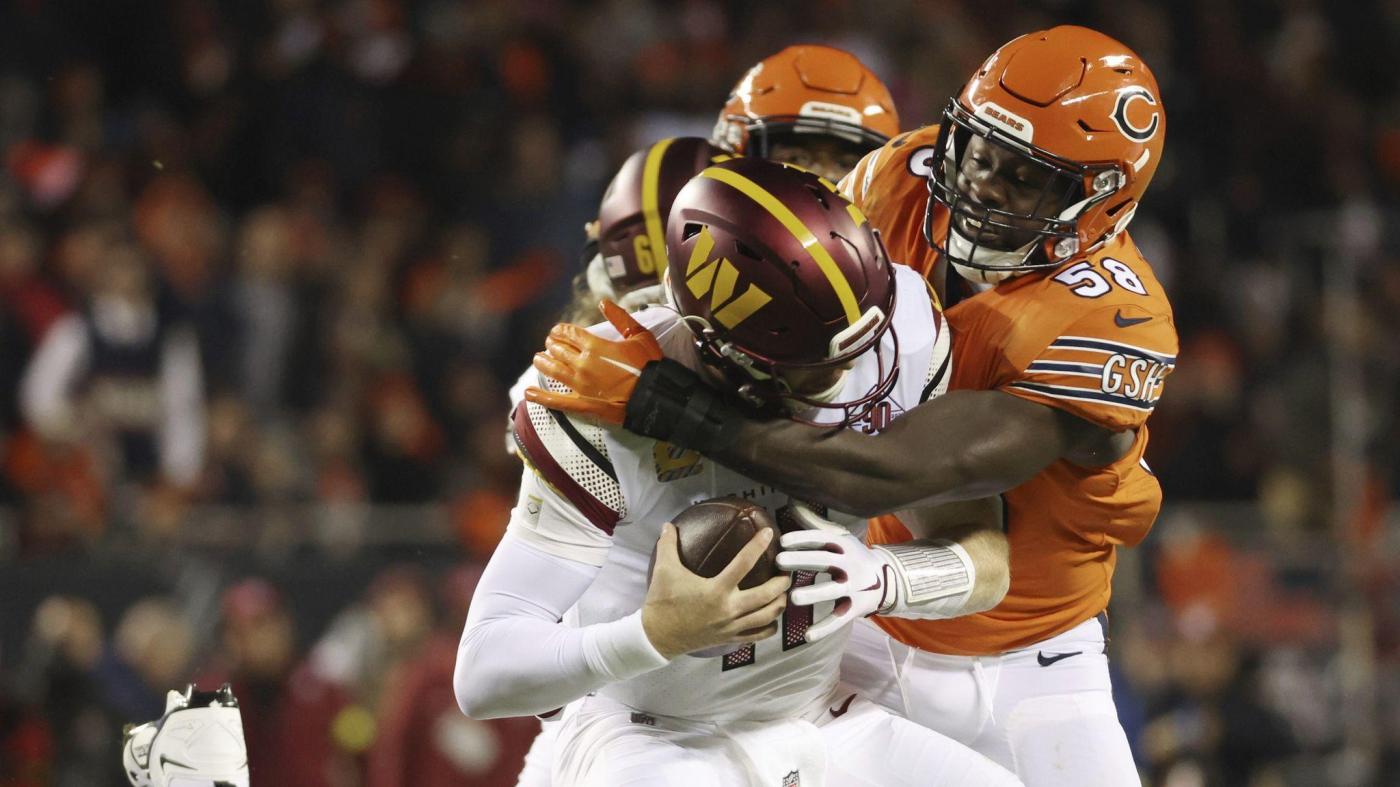 General manager Ryan Poles said there was a “record-setting” piece to the contract the Chicago Bears offered Roquan Smith during training camp, when the inside linebacker made a public bid for a trade.

Some league sources since have said that word was the Bears made a solid offer, but all that really matters is how Poles viewed it. If he looked at it as a tip-top offer, then the Bears never were going to reach an agreement with Smith. So finding a trade partner in the Baltimore Ravens on Monday made all the sense in the world — and was probably more of a lucky development than anything else.

The Bears will ship Smith to the Ravens — and pay down his remaining 2022 salary by about $4 million — in exchange for second- and fifth-round draft picks in 2023 and inside linebacker A.J. Klein, who was on the New York Giants practice squad four weeks ago before the Ravens signed him.

If you think the Bears’ apathetic showing Sunday in a 49-29 loss to the Dallas Cowboys had anything to do with the fallout from the Robert Quinn trade last week, prepare for pathetic this week with the Miami Dolphins visiting Soldier Field.

Players talked about the emotional toll the Quinn trade had on the locker room. He was a 33-year-old veteran with one sack this season. Smith, 25, is in the prime of his career and was the best player in the building. This will affect those who remain, who are being held to a professional standard on a daily basis with coach Matt Eberflus’ H.I.T.S. principle, who are being asked to give their all in every meeting and every rep.

Recall, Smith broke down in the media room as he was answering questions Wednesday when news broke that Quinn was off to Philadelphia.

“Let me take a second, if you don’t mind,” Smith said before an extended pause. “You know, I have a great deal of respect for that guy. Damn. Crazy.”

With that, Smith left the room. A wiseguy cracked that Smith was most upset he wasn’t the one traded. Now he’s gone too, and the Bears have little in the way of building blocks for the front seven of a defense that can’t stop the run or get off the field on third down.

Not only has Poles traded away two players who started the season as captains, he has dealt two of the three highest-paid players on the roster. The Bears now have one first-round draft pick remaining: quarterback Justin Fields, who accounts for the Round 1 picks in 2021 and 2022 after the trade up to select him.

If there was any doubt — and there shouldn’t have been — the remainder of this season is strictly about the development of Fields and whether he emerges as a potential franchise quarterback for Poles and Eberflus. The Smith trade also is a reminder that pretty much anyone else on the roster can be had before the 3 p.m. Tuesday deadline.

The Bears now own nine picks in April with extra selections in Rounds 2, 4 and 5 and no sixth-round pick. Poles will need those choices and a bounty of salary-cap room — the Bears will have more than $100 million — to begin stocking the roster after taking this year to clear the books and the roster.

Smith leads the NFL with 83 tackles and will help fill a hole in the middle of a Ravens defense that has struggled, especially against the pass. Former first-round pick Patrick Queen hasn’t turned into the player the Ravens (5-3) hoped he would be, and they wanted to shore things up.

While Smith made only five tackles in the loss at Dallas, he was coming off a marquee game Monday night at New England in which he made a game-high 12 tackles with a sack and an interception. He raced to the end zone after the fourth-quarter pick in the 33-14 blowout, using his hands to mime peeling off bills from a stack of money.

“I knew we had the game wrapped up and just let it rain a little bit,” he said.

Smith made 12 tackles with a sack in the Week 6 loss to the Washington Commanders and had 16 tackles and an interception in the Week 3 win over the Houston Texans, the kind of big games he figured would help his bid to be paid.

“I feel like I’m in the same head space that I was back when I asked (to be traded) and that was declined,” Smith said last week, moments before news of the Quinn trade broke. “I shift my focus to just being the best guy I can to the guys in the locker room, best guy I can to myself and to the loyal fans and I just want to go out each and every week and show that I’m the best in the game. That’s just been my thing.”

The Ravens have done their homework on him for a little while, and it will be interesting to see if they can sign Smith to a multiyear extension. They paid a lot for a half-season rental and figure to need their franchise tag for quarterback Lamar Jackson. The Ravens have long been masters of the compensatory draft pick game, and if Smith were to leave via free agency, they could recoup a third-round pick for him in 2024.

The Ravens have placed a high value on inside linebackers, who don’t typically carry very much positional value. That’s one reason personnel men I polled view the return the Bears got for Smith as a positive.

Yes, the Bears could have secured Smith with the franchise tag, but the last off-ball linebacker to be tagged was David Harris by the New York Jets in 2011. Franchise tag numbers are the same for middle linebackers in a 4-3 scheme as they are for edge rushers playing outside linebacker in a 3-4 scheme. Pass rushers have much higher value, and that’s one reason there were questions about how high the Bears would be willing to go to keep Smith happy.

Smith plays with terrific range. He affects the run game and the pass, and the Bears have highlighted his effectiveness as a blitzer with few others getting home regularly. He’s a fit for what Eberflus seeks in the defense. But he’s only one part, his position isn’t the most important element and apparently the Bears didn’t see the money making sense in the end.

The teardown portion of the rebuild will be complete soon. Only a few hours remain for Poles to consider trade offers for other players. He and his staff have their work cut out for them in the offseason. This team needs almost everything, including a young, athletic linebacker with a nose for the ball.

The hard work is about to begin.