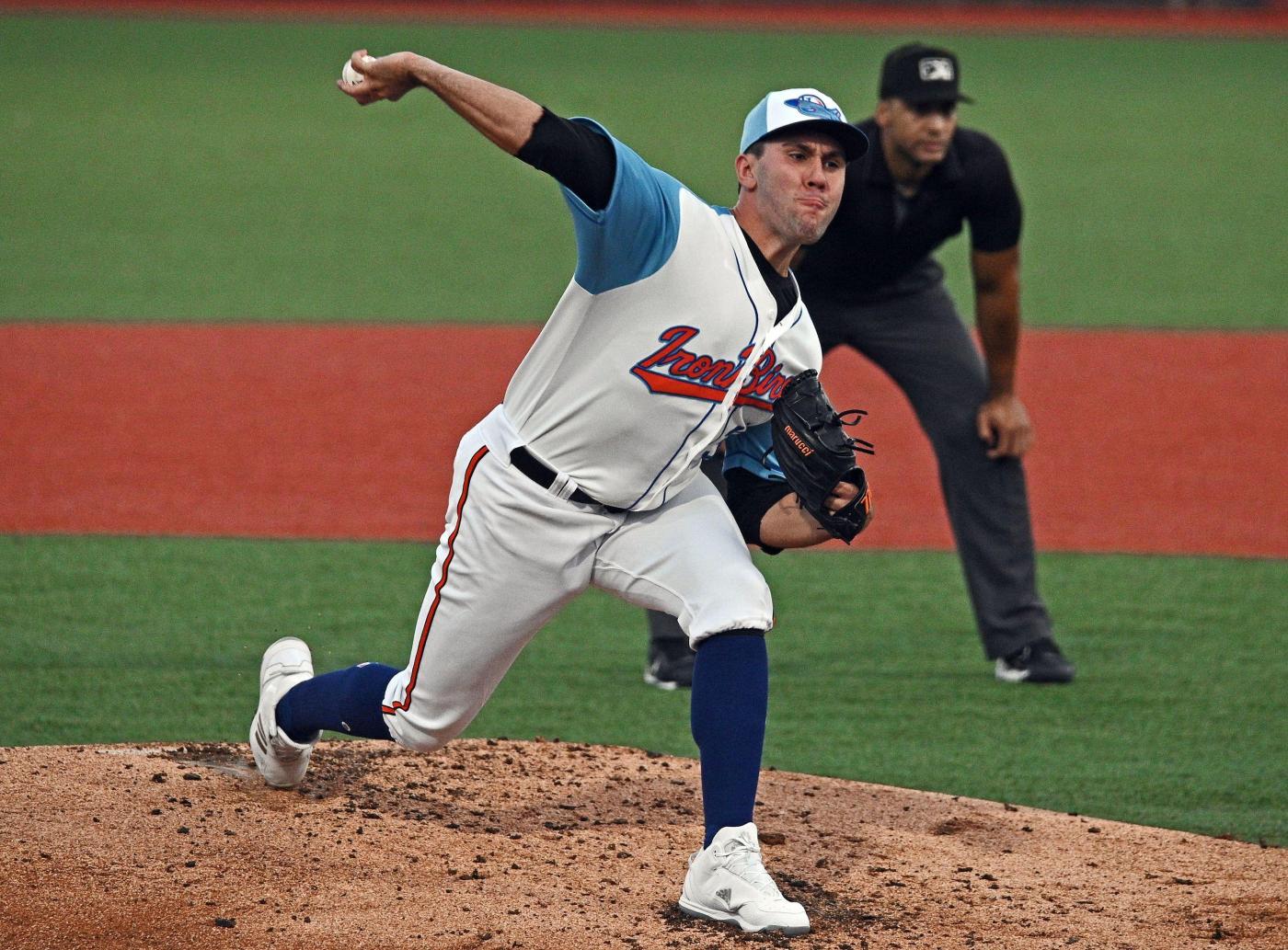 For the entire minor league season, The Baltimore Sun has gathered a list of the standout Orioles prospects from each week. The most common names frequently coincided with Baseball America’s top 30 rankings for Baltimore’s farm system, including Gunnar Henderson and — for a brief time — Adley Rutschman.

Both of those top prospects are now playing pivotal roles for the Orioles, with Henderson joining the big league ranks on Aug. 31.

But there’s a slew of players who have put together equally impressive minor league seasons, deserving of a hat-tip in the end-of-season honors list from The Sun. Triple-A Norfolk still has just over a week left in its season, and High-A Aberdeen is in the midst of its first South Atlantic League Championship Series.

As some minor league campaigns come to a close, though, here’s a look at which Orioles prospects impressed the most over the course of the 2022 season.

Before Rutschman arrived in Baltimore and changed the Orioles’ season, he only received 84 minor-league plate appearances this season. And Rutschman had a .924 OPS, the sample size isn’t large enough to feature as a minor league All-Star.

Handley, meanwhile, put together a strong season for Double-A Bowie in which he showed a flash of power potential. Selected in the sixth round of the 2019 draft, Handley knocked 11 homers and had a .769 OPS. His 114 wRC+, or weighted runs created plus, a statistic that takes into account factors such as ballpark conditions and a pitcher’s ERA, where 100 is league average, is the highest among Orioles minor league catchers with at least 300 plate appearances, and his 11.7% walk rate was highest among the group, too.

Honorable mention: Cody Roberts didn’t go deep as frequently as Handley, but the catcher held a .271 average and recorded 18 doubles with 42 RBIs. Roberts split time between Bowie and Norfolk, ending his season with nine hits in seven games for the Tides.

Bowens spent the season with Aberdeen, where he struck out 29% of the time but walked at a career-high 15.2% rate, good for a .768 OPS. Bowens joined the organization as an undrafted free agent due to the 2020 draft being shortened to five rounds.

Bowens smacked seven homers as part of his career-high 88 hits, and he ranks eighth in the Orioles farm system in wRC+ (117) among players with at least 400 plate appearances.

With the ability to play at shortstop and third base, Westburg is a valuable utility glove with a bat that broke out in 2022, putting him in position to push for a major league debut. Westburg was selected out of Mississippi State in the first round of the 2020 draft.

The 23-year-old leads the Orioles’ minor league system with 26 homers, and his .862 OPS ranks fifth among players in Baltimore’s organization with at least 400 plate appearances. Westburg’s 129 wRC+ is also fifth, and his average raised from .247 with the Baysox to .277 with the Tides.

Honorable mention: Only 19, Frederick Bencosme rose three levels this season, from rookie ball to Aberdeen by year’s end. Across those three levels, Bencosme holds a .311 average with a .793 OPS.

At the beginning of the season, when Westburg, Ortiz and Henderson shared an infield, Westburg said Ortiz had the best glove of any of the trio of prospects. But Ortiz also has proven himself at the plate, reaching Norfolk by the end of the season and has immediately taken to the level, with a 1.075 OPS in 17 games with the Tides.

Across the Double-A and Triple-A levels this season, Ortiz has an .829 OPS — the sixth-best among players with at least 400 plate appearances — with 18 homers.

Honorable mention: Darell Hernaiz, selected in the fifth round of the 2019 draft — one round after Ortiz — rose from Delmarva to Bowie this year. He holds a .779 OPS, and his 112 wRC+ ranks ninth among batters with 400 plate appearances.

Henderson split time between third base (48 games) and shortstop (50 games), and the Orioles even experimented with him briefly at first base and second base. But his home is on the left side of the infield, and he’s immediately established himself as a major leaguer.

The 21-year-old’s rapid rise from Bowie to Norfolk elevated him to No. 1 prospect status after Rutschman graduated from the rankings. Henderson hit .297 with a .946 OPS between Bowie and Norfolk, with 50 extra-base hits and 22 stolen bases. And since arriving with the Orioles, he has provided instant production.

Honorable mention: Coby Mayo’s power was especially on display at Aberdeen, where he hit 14 homers before adding five long balls in 34 games at Bowie. Mayo held a .782 OPS with 69 RBIs.

Behind Westburg, Norby’s 25 homers rank second in the farm system. Norby plays mostly second base but also featured as a left fielder this season. A second-round pick in 2019, Norby’s OPS rose to .960 during his time with Bowie.

Haskin spent the season with the Baysox, where he posted an .821 OPS — the seventh best in the farm system among qualified full-season affiliate players. The Tulane product learned to accept what some labeled as a “weird” swing, and it allowed Haskin to be himself at the plate. The results followed he had 15 homers and 23 doubles.

Few players have experienced as quick of a rise through the minors as Cowser this season. As a first-round pick in 2021, Cowser began in Aberdeen and has wound up with Norfolk, and his 141 wRC+ is second only to Henderson. His .868 OPS is third among Orioles minor leaguers with at least 400 plate appearances, and Cowser’s walk rate of 15.5% is fifth best.

The only outfielder with a better OPS than Cowser is Stowers, who has since risen to the MLB ranks. In Stowers’ time with Norfolk, the 24-year-old second-round pick in 2019 held an .884 OPS with 19 homers and 29 doubles.

Honorable mentions: Shayne Fontana recorded an .898 OPS with Bowie before his rise to Norfolk toward the end of this season. Heston Kjerstad, who made his professional debut this season after missing the entire 2021 season with heart inflammation, posted an .851 OPS across the Low-A and High-A levels. He’ll will play in the Arizona Fall League.

Rodriguez’s season hit a bump when he suffered a Grade 2 right lat muscle strain in June, postponing an expected promotion to the majors. He has returned to Norfolk after a rehab start and two appearances for Bowie, and his latest outing showed how dominant he can be: five innings, two hits and no runs.

Among pitchers with at least 50 innings, no one in the Orioles’ system has a better ERA than Rodriguez’s 2.42, and his 0.90 WHIP leads the way, too. Rodriguez is the top pitching prospect in baseball.

Signed as an undrafted free agent in 2019, Denoyer proved himself as a starter and reliever this season for Bowie, where he posted a 2.61 ERA. His 0.93 WHIP trails only Rodriguez among pitchers with at least 30 innings this season, and he’s walked just 6.1% of the batters he faced.

Moore joined Baltimore as part of a 2019 trade with the Minnesota Twins, and the 2017 16th-round pick has developed into a steady reliever for Aberdeen. His 10 saves are tied for the second most in the farm system, and he has done it with a 1.36 ERA and a 31.9% strikeout-to-walk ratio — the best among Orioles minor leaguers with at least 30 innings.

A 2021 12th-round pick from New Mexico, Armbruester has thrown the second-most innings (117) of any Orioles minor leaguer. He rose from Aberdeen to Bowie, and he holds a 3.85 ERA with a 1.07 WHIP — the latter of which is the fifth lowest among qualified Orioles pitchers.

Rom, a 2018 fourth-round pick, has started 23 games this season and made the jump from Bowie to Norfolk, but his performances haven’t changed. Between both levels, he holds a 4.24 ERA, 1.46 WHIP and struck out an average of 10.9 batters per nine innings in 108 1/3 innings.