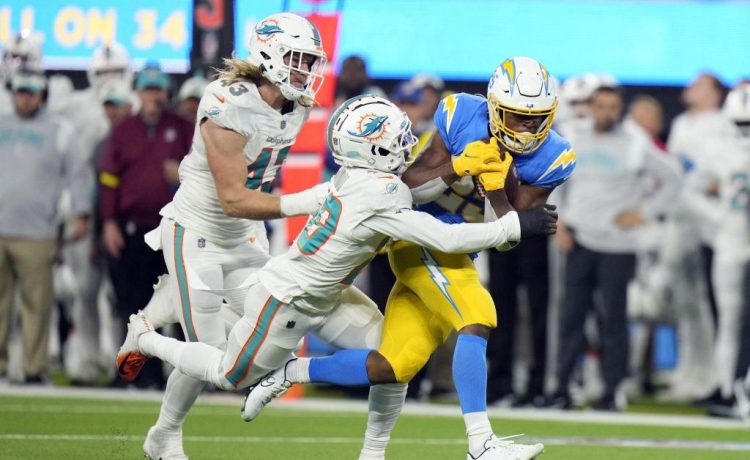 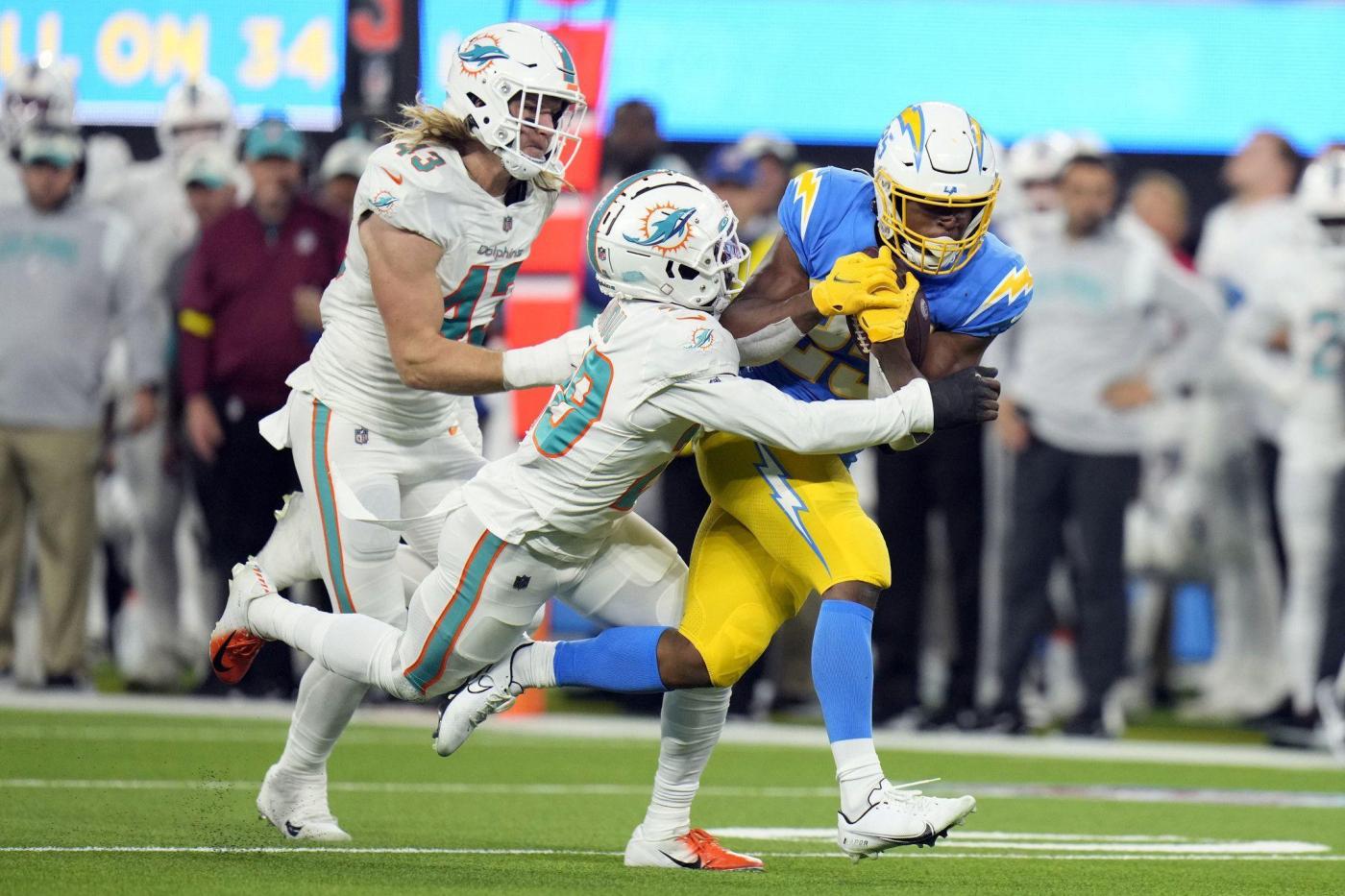 The Dolphins ventured to Los Angeles to play the Chargers in the second game of a three-game road swing Sunday night. It didn’t go well as the Dolphins lost, 23-17. Here are a few observations:

Offense stalling vs. teams .500 or above

Trip off to bad start

This three-game road swing of San Francisco, the Los Angeles Chargers and Buffalo is off to a terrible start at 0-2, making the Saturday night game at Buffalo a big one. An 0-3 road trip would hurt badly, although the Dolphins would still be in position for a wild-card spot with four games remaining. To recap the road trip, the Dolphins lost to San Francisco 33-17 last week, and to the Chargers 23-17 on Sunday. The Dolphins conclude the road swing with Saturday night’s game at Buffalo.

Wide receiver Tyreek Hill, who sustained a left ankle injury in the second quarter after his 57-yard fumble return for a touchdown, established a Dolphins single-season record for receiving yards with a 13-yard reception in the first quarter. Hill, who had four receptions for 81 yards and one touchdown receiving, now has 1,460 yards receiving. Hill entered the Chargers game with 1,379 yards receiving, 11 yards from eclipsing the previous mark of 1,389 set by Mark Clayton in 1984.

This was quarterback Tua Tagovailoa’s fifth start in nationally televised night game, and it fell in line with the previous four. It was the most points his offense had scored with 17 (though seven points came on a long fumble return), but that is faint praise. Previously, the most points the Dolphins offense had scored with him taking the snaps in a national-TV game was in the Oct. 23 16-10 win over the Pittsburgh Steelers. The scoring by the Tua-led offense in the other such games: 2020 in Las Vegas (13 points), 2021 in New Orleans (13) and in September in Cincinnati (six). In the games against the Raiders and Bengals, Tagovailoa exited each.

Hill’s 57-yard fumble-return TD in the first half stands as the third-longest fumble-return touchdown in franchise history (in games that didn’t happen during the 1987 NFL strike). The longest was returned 85 yards by Jason Taylor at home against the Denver Broncos in 2005, followed by Andrew Van Ginkel’s 78-yarder against the visiting Rams in 2020 in Tagovailoa’s first career start. Interestingly, the top six-longest fumble-return TDs in Dolphins history have all come against teams from West divisions: Broncos, Rams, Chiefs (strike game), Chargers, Chiefs (strike game) and Raiders.

The Chargers, scoring 23 points, broke a streak of seven straight road games in which the Dolphins defense had allowed at least 26 points. The seven-game span is a club record, as was the six-game streak in a single season. The half-dozen in one season, streak or not, is tied for the most with the 1986 and 2018 teams. The 2022 season is the first in Dolphins history where they will be playing nine road games, so there are more chances of it happening. The streak: Titans: 34; Ravens: 31; Bengals: 27; Jets: 38; Lions: 27; Bears: 32; 49ers: 26.

Cornerback Xavien Howard, who hasn’t played up to his Pro Bowl standard all season, partly due to groin injuries, was a target for the Chargers all night, as they had no problem going right at him early or later. One of the worst plays for Howard was the 55-yard gain for wide receiver Mike Williams in the third quarter. Williams beat Howard deep and fell to the ground. But Howard never touched him, and Williams got up and ran a few more yards. Sheesh.

The Dolphins’ pass rush trio of Bradley Chubb, Jaelan Phillips and Melvin Ingram played their fifth game together Sunday night against the Chargers with mixed results. Phillips had a sack and generally made life miserable for Herbert. But Chubb, acquired in a high-profile Nov. 1 trade deadline deal, and Ingram, who started the game as the team leader in sacks with 6.0, didn’t do much. Chubb entered the game with 2.5 sacks. Phillips, who had an outstanding game, is now tied with Ingram with 6.0 sacks. The Dolphins needed more from their pass rush trio.

Dolphins on third down, Part I

The Dolphins, trailing 10-7, unwisely put many defenders at or near the goal line on a Chargers third-and-goal from the Chargers’ 17-yard line late in the second quarter. Quarterback Justin Herbert dumped a short pass to running back Austin Ekeler, who had plenty of room to run and took it to the 1-yard line before the Chargers converted the fourth-and-goal for a touchdown and a 17-7 halftime lead. The Dolphins have employed that defense previously, but it never burned them the way it did Sunday night.

The Dolphins rushed for 92 yards on 19 carries, a respectable total. But it wasn’t a good night running the ball. The Dolphins, who lost running back Jeff Wilson Jr. (four carries, 26 yards) to a hip injury in the second quarter, didn’t get a run game going until the second half, when Tagovailoa (three carries, 28 yards) scrambled for a few yards, his first carries in more than two games. They had 36 yards rushing in the first half. The Dolphins entered the game 28th in rushing at 89.7 yards per game. They had 99 yards rushing the previous two weeks (66 vs. Houston, 33 vs. San Francisco). Interestingly, running back Raheem Mostert, the Dolphins’ leading rusher with 37 yards on 11 carries, entered the Chargers game with 573 yards rushing and is threatening his career-best season rushing total of 772 yards established in 2019.

Dolphins on third down, Part II

Tua vs. Herbert is one-sided battle

Tagovailoa, who had one of his worst games of the season, and Herbert were drafted a spot apart in 2020, with Tagovailoa going No. 5 and Herbert going No. 6. To a certain extent, they’ll always be linked for that reason. Herbert got the best of Tagovailoa on Sunday night. Easily.

Herbert, it should be noted, was sacked four times and took seven hits; Tagovailoa was sacked twice and hit four times.

The Dolphins, who allowed 17 first-half points Sunday night, entered the Chargers game having allowed at least 27 points in each road game this season. They improved on that stat, allowing 23 points to the Chargers. Still, the Dolphins allow an average of 31.4 points per game on the road.

Dolphins need to flip script in the cold

Although Hill topped Clayton’s club record for receiving yards in a season and now has 1,460, it will be much harder to best the NFL record of 1,964 receiving yards in a season (set in 16 games by the Lions’ Calvin Johnson in 2012) and the Vikings’ Justin Jefferson. Jefferson, after a club-record 223 receiving yards against the Lions, stands at 1,500 yards going into Week 15. Hill needs 505 yards to pass Johnson. That means he needs to average 126.3 yards a game over the final four games to hit 1,965, or 168.4 over the next three to do it in the 16 games that MegaTron did. Of course, that limp at the end of Sunday night’s game was worrisome.

The Tyreek yardage you don’t hear about

There was a graphic this week that showed the top five wide receivers in plays of at least 15 yards entering NFL Week 14. Hill led with 39. The Cowboys’ CeeDee Lamb and Vikings’ Justin Jefferson were tied for second with 32, and the Bills’ Stefon Diggs and Raiders’ Davante Adams were at 31. However, when it comes to pass-interference calls that got at least 15 yards for each receiver, Hill is even more dominant. Among that quintet, Jefferson had one 15+ pass interference flag drawn for 19 yards. Lamb had one for 31, Diggs had two for 42 and Adams had two for 48. Hill? The Dolphins wideout almost lapped the field with four for a whopping 124 yards.

The Dolphins will face, by far, their most daunting game of the season, playing the 10-3 Bills, with revenge on their minds, in freezing temperatures and wind that could include snowfall. While Josh Allen has broken a 100 passer rating in every home game he has played against the Dolphins, he hasn’t dominated through the air in that 110.6 passer rating, as the most passing yards by him in any Dolphins game in Orchard Park has been 249. Where he has gored Miami has been on the ground. On non-kneeldowns, Allen has run 19 times for 189 yards and three touchdowns in those four games.