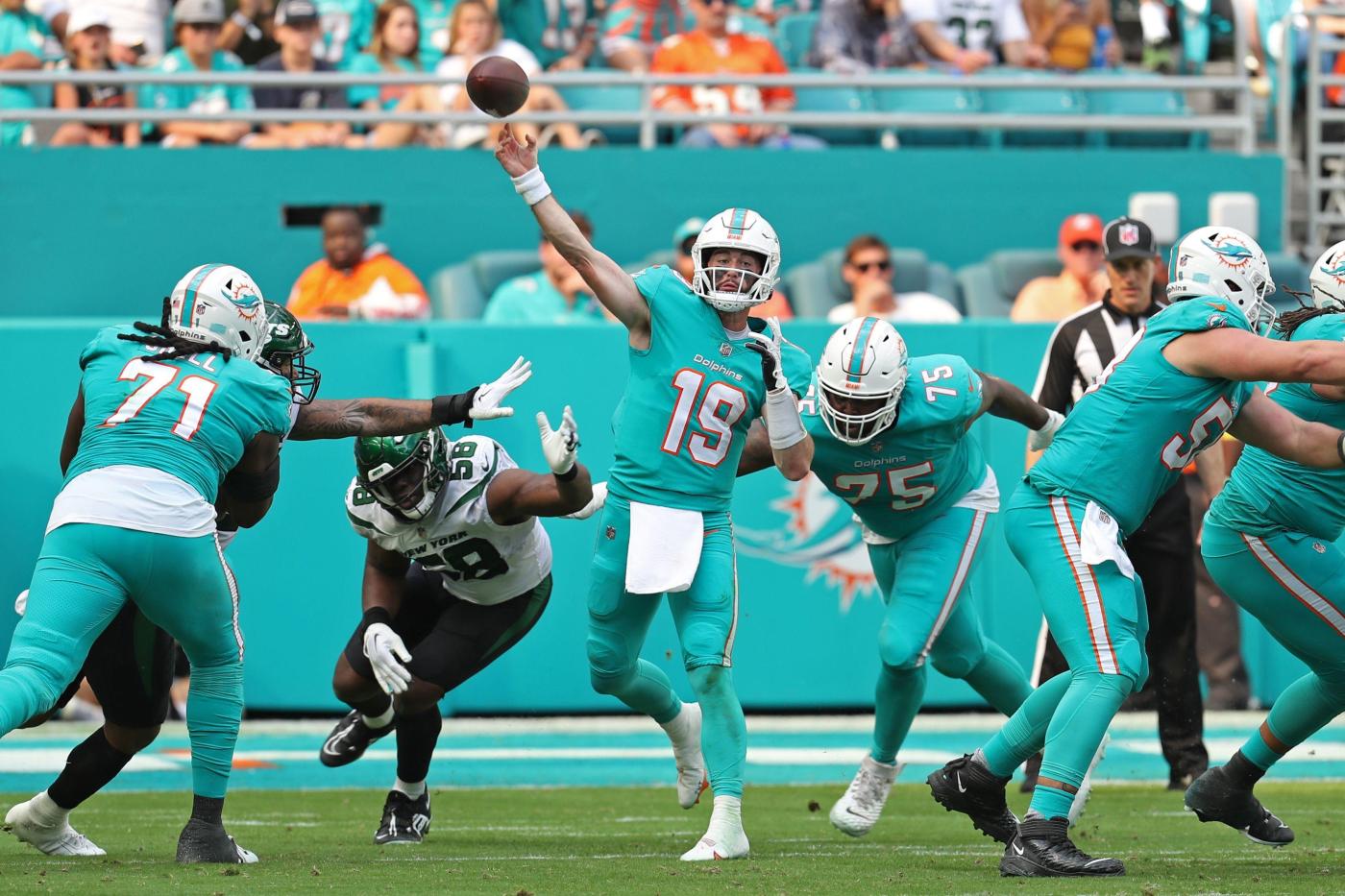 Here are some of the top takeaways from the Miami Dolphins’ 11-6 win over the New York Jets at Hard Rock Stadium on Sunday that set Miami up for a wild-card round playoff game vs. the Bills in Buffalo next weekend:

Kicker Jason Sanders made a 50-yard field goal to send the Dolphins to the playoff for the first time since the 2016 season. Sanders was 1 of 5 on field goal attempts of 50 or more yards entering the game. Sanders, an All Pro in 2019, struggled at times this season. He was 26 of 32 for the regular season. — Chris Perkins

Skylar Thompson give his team a chance to win

Dolphins rookie quarterback Skylar Thompson kept his team in the game and gave them a chance to win, which is what you want from a third-teamer. Thompson ended 20 of 31 for 152 yards, no touchdowns, no interceptions and a 76.3 passer rating. Thompson, who ended the first half 11 of 16 for 98 yards and an 84.9 rating, didn’t make any foolish decisions. Although the Dolphins didn’t score a touchdown, Thompson delivered just what you want from a backup quarterback.

Sauce and Reed vs. Hill and Waddle

The Jets cornerbacks duo of rookie Pro Bowl selection Sauce Gardner and D.J. Reed didn’t do anything special against Dolphins wide receivers Tyreek Hill and Jaylen Waddle, but they did enough, mostly by taking away those middle-of-the-field throws the Dolphins feasted on in the first half of the season. Hill, who sustained an ankle injury in the second quarter, had 23 yards on two receptions in the first quarter. Waddle had 33 yards on three receptions and ended with five receptions for 44 yards.

The pass rush trio of Bradley Chubb, Melvin Ingram and Jaelan Phillips didn’t do much Sunday. In fact, they only had a handful of snaps together, possibly because Chubb is still playing with a cast/protective device on his right hand. They came in for the first time on third-and-9 and Jets QB Joe Flacco completed a pass to Elijiah Moore for 15 yards and a first down. Flacco received a little pressure on both sides from Ingram and Chubb. They played together again early in the third quarter on an incomplete pass right before kicker Greg Zuerlein missed a 55-yard field goal attempt. Chubb got a 5-yard offsides penalty later in the second quarter. The trio was on the field together on the first third down of the third quarter for a third-and-8, which resulted in a 7-yard completion. Overall, Phillips supplied decent pressure throughout the day but that was about it for the trio.

Fighting back against flipping the field

McDaniel is now 1 for 6 on challenges. He challenged a fourth-quarter 10-yard reception on third-and-11 from the Jets 49-yard line. The pass to Jets wide receiver Garrett Wilson was originally deemed complete but after review it was determined the ball hit the ground. McDaniel also challenged a third quarter play in which he thought Wilson fumbled after a reception. But it was determined that safety Eric Rowe touched Wilson while he had a knee on the ground. The lost challenge cost the Dolphins a timeout. McDaniel has refused to detail who in the upstairs coaches booth is responsible for the Dolphins’ challenges.

No Tua, no Armstead, No Tyreek, no problem?

Midway through the second quarter wide receiver Tyreek Hill left the game with an ankle injury, meaning the offense was without Hill, quarterback Tua Tagovailoa and left tackle Terron Armstead. The Dolphins ended up kicking a 37-yard field goal and taking a 3-0 lead. It’s believed to be the first time all season Tua, Tyreek and Terron were out due to injury. And, no, that’s not a viable offensive solution moving forward.

There was a 23-yard loss in the first quarter after a nice 26-yard completion from Skylar Thompson to tight end Durham Smythe that put the Dolphins at their own 35-yard line. The loss came on a bad snap from center Connor Williams. It appeared Thompson wasn’t ready for the snap, and the snap was high. It was another example of the Dolphins not being able to get out of their own way. After the Dolphins converted a fourth-and-5 and got to the Jets 33-yard line they had a delay of game on the next play and a first-and-15. Fortunately, the Dolphins cleaned things up from there.

The Dolphins, who began play this week last in rushing attempts at 358, rushed for 162 yards on 32 carries. The Dolphins had 63 yards on 16 carries (3.9 yards per carry) in the first half, led by Jeff Wilson’s 40 yards on eight carries and Raheem Mostert’s 23 yards on seven carries. Wilson ended with 32 yards and Mostert with 71.

The Jets aren’t known for their offense but credit the Dolphins defense for keeping them down. The Jets hadn’t scored a touchdown in their previous two games entering Sunday. They didn’t come close to a touchdown against the Dolphins as the defense did good work. The closest the Jets got to a touchdown were snaps at the 14- and 17-yard lines resulting in their 32- and 35-yard field goals.

The Jets game was the fourth time Miami had gone into the finale having lost at least three games in succession. The streak going in, the finale result, Miami’s season record and playoff result if any:

Connor Williams needs to work on his snaps

The snap that got past Skylar Thompson for a 23-yard loss was the noticeable error in the first quarter by Miami, but that hike was the third one in the Dolphins’ first 15 plays, and he had another high one five plays later. To his credit, Tua Tagovailoa prevented a number of huge losses by snagging snaps at helmet height with plenty of juice on them.

It was big for Mike McDaniel to finally get a call overturned on challenge with 6:02 left against the Jets when Garrett Wilson had what was ruled a completion overturned late in the game in a huge spot. He needed it. The Dolphins very possibly would have been sitting their starters against the Jets with a playoff spot locked up last week if their coach had properly handled the NFL’s challenge system the past 14 days.

In that fortnight, McDaniel has given away two timeouts with a pair of inconceivable challenges: On a 24-yard Tyquan Thornton catch in New England and Sunday against the Jets when Wilson had his knee on the ground and was touched before the ball was punched out. McDaniel looked to get both reversed, more as a product of hope than evidence.

So, the graphic keeps being shown that he is 1 for 6 in tossing the red flag. However, as damaging have been the two times he hasn’t challenged long pass plays. First, on Christmas, an erroneously ruled 31-yard completion from the Packers’ Aaron Rodgers to Marcedes Lewis that set up Green Bay for a first-and-goal en route to a touchdown in a 26-20 Dolphins loss. Then, against the Patriots, eschewing a challenge when Tyreek Hill clearly had two feet down with possession on a 29-yard connection from Teddy Bridgewater on Miami’s first drive that was ruled incomplete. He needs to be grilled about his process, especially since they actually do have a game next weekend.

How many times have all three Florida teams made the playoffs?

Last year, the Patriots, down 27-20 in the waning seconds, tried to get their own Miami Miracle. However, a toss from receiver Jakobi Meyers bounced to Dolphins linebacker Sam Eguavoen in the end zone with no time left for a season-ending touchdown and 33-20 victory. On Sunday, the Jets were in similar desperation mode when receiver Elijah Moore grabbed the ball after a series of laterals, and, after the gun, fumbled the ball out of the end zone for a safety that pushed the final from 9-6 to 11-6

On deck: At Buffalo Bills, day and time TBA

The Dolphins who had their confidence high by scoring 29 points in Buffalo less than a month ago, head back up to western New York with the defense — led by their run-stoppers — flying high. Will Tua be able to play. Obviously, the $64 million question.