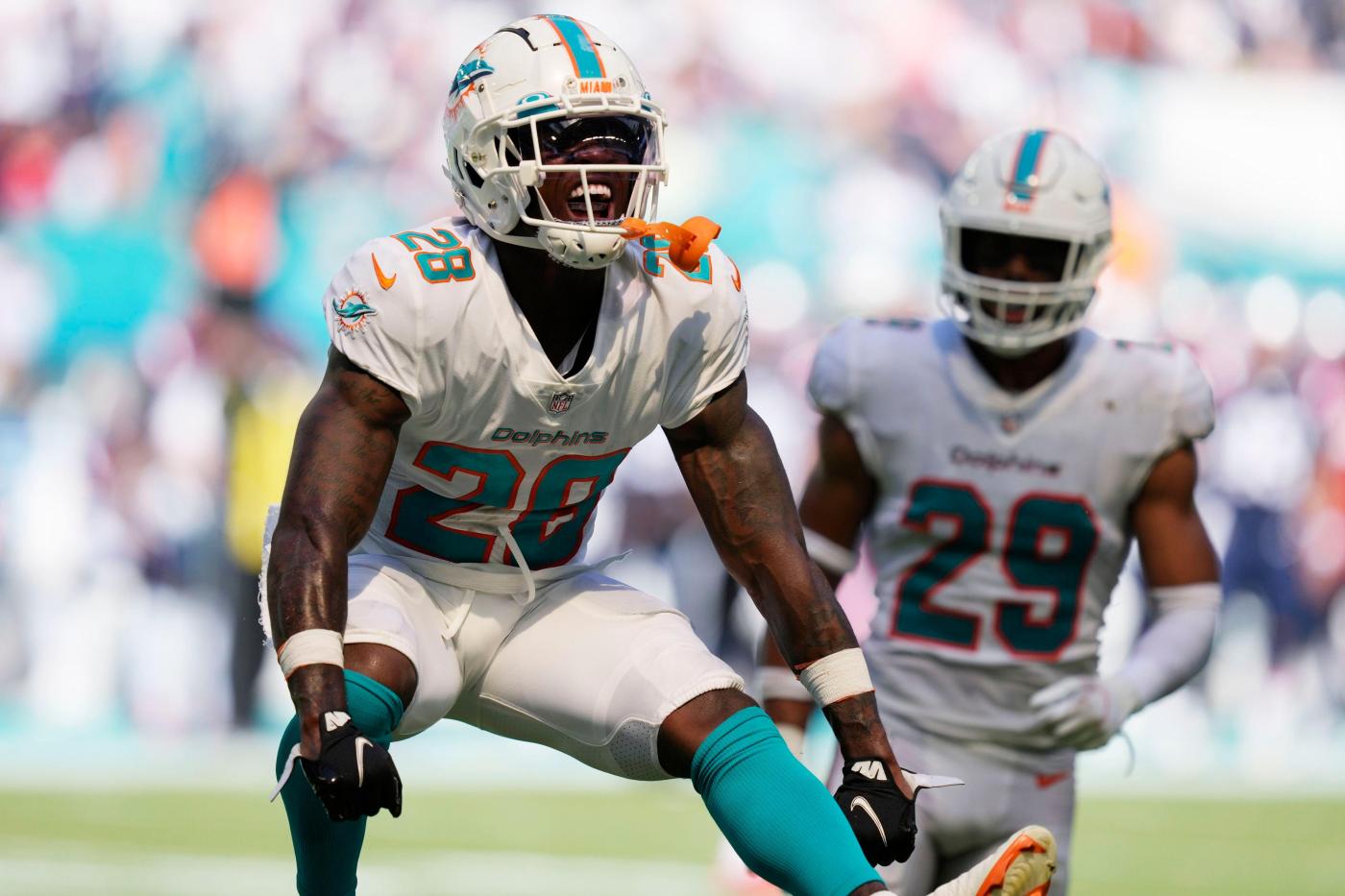 The Dolphins handled New England fairly easily in Sunday’s season opener at Hard Rock Stadium, further raising expectations for the season. Coach Mike McDaniel, quarterback Tua Tagovailoa, and wide receiver Tyreek Hill, the ones who caused the most curiosity coming in, were all good.

The Dolphins showed resilience and quality depth at times, the latter in the secondary and offensive line, and controlled the game the entire day. It was a strong showing and perhaps a sign of things to come.

Here are some more takeaways from the season opener against the Patriots:

His players were prepared, and rarely appeared surprised by anything thrown their way from New England coach Bill Belichick, known for his gameday trickery. McDaniel, who was calling plays for the first time, showed diversity and creativity. The moment wasn’t too big for McDaniel and that bodes well for the season. — Chris Perkins

Dolphins have now won four consecutive games over New England, and five of the past six

In other words, the Dolphins have owned the Patriots recently. Quarterback Tua Tagovailoa is now 4-0 against Belichick. There was no evidence that Belichick helped his team by practicing at Palm Beach Atlantic University since Wednesday, or that he hurt his team by having Matt Patricia and Joe Judge splitting offensive coordinator duties.

But it was the last time it happened that way. Miami’s defensive back depth answered the call, which is impressive considering it was without starting cornerback Byron Jones (leg), backup cornerback Noah Igbinoghene (inactive) and safety Eric Rowe (inactive). Rookie cornerback Kader Kohou made his debut and had a tackle and a big fumble-causing hit. Overall it was a nice showing for the secondary. New England quarterback Mac Jones ended with a harmless 21 for 30 for 213 yards, one touchdown and one interception.

New England learned a hard lesson by throwing at All Pro cornerback Xavien Howard in the end zone in the first quarter. Howard tipped the pass in the air and safety Jevon Holland caught it and returned it 31 yards to the Dolphins’ 28-yard line. In the fourth quarter Kohou had a hit that caused a fumble and linebacker Jaelan Phillips recovered. Miami finished with one interception, two recovered fumbles, two sacks, six passes defended, four tackles for loss, and three quarterback hits.

Quarterback Tua Tagovailoa, 23 for 33, 270 yards, one touchdown, no interceptions (104.4 passer rating) was mostly good all day when it came to decision-making, accuracy and patience

It was mostly a short and intermediate passing game, which is fine. The key is Tagovailoa got the ball to wide receivers Hill and Jaylen Waddle in places where they could get YAC (yards after catch). Tagovailoa didn’t throw deep often but he went deep to fullback Alec Ingold in the first quarter. The ball was slightly overthrown but Hill appeared to be double covered. It was a good choice by Tagovailoa to recognize the coverage matchup and go for it.

The first was a fair catch at the 6-yard line and the second one was downed at the 8-yard line by New England special teams ace Matthew Slater. During the practice week McDaniel said he wouldn’t hesitate to use wide receivers Hill and/or Waddle as punt returner. Running back Raheem Mostert was deep for the Dolphins’ only kickoff return. By the way, credit punter Thomas Morstead for field-flipping punts, three of which were inside the 20-yard line. He averaged 45.8 yards per punt and his longest was 58 yards. The Dolphins’ special teams had a good day.

The offensive line had a promising showing

Right tackle Austin Jackson went down with an ankle injury early in the second quarter and was replaced by Greg Little. Then in the third quarter Little went down. Miami shifted right guard Robert Hunt to right tackle and inserted Robert Jones at right guard. Little returned in the third quarter. But in the fourth quarter left tackle Terron Armstead was sidelined and left guard Liam Eichenberg took his place. The offensive line showed good versatility and depth in all situations. But the offensive line allowed three sacks and the run game was sluggish so there are areas for immediate improvement. But overall it was a good start.

Dolphins’ defense did well at limiting significant plays, but two self-inflicted errors led to a Patriots touchdown in the third quarter

The Dolphins had 12 men on field penalty on second-and-4, giving New England a first down at the Dolphins’ 37-yard line. Four plays later on fourth-and-1, Howard was called for illegal contact on an incomplete pass. New England scored five plays later to cut its deficit to 17-7. Overall, however, the defense was solid in execution and discipline.

The Dolphins finished with 65 yards on 23 carries. Chase Edmonds had 12 carries for 25 yards and Mostert had five carries for 16 yards. Coach McDaniel puts an emphasis on the run game so perhaps there will be tweaks before next week’s game at Baltimore.

Patriots fans are usually loud and proud at Hard Rock Stadium, but that didn’t seem to be the case Sunday

The Dolphins, of course, have sold out their season ticket allotment for the first time, and that might be a factor, But Patriots fans seemed to have a smaller presence than in recent years and they definitely weren’t loud. Good job by the Dolphins, and Dolphins fans.

In his four games against Belichick and the Patriots, Tagovailoa has never lost, but his offense’s scoring output has been meager, with only 18.0 points a game. Meanwhile, the defense in those games has held New England to a paltry 14.8 points a game, and has added two touchdowns of their own. — Steve Svekis

The Dolphins tight end/wide receiver is still trying to get back to the level of production he had established late in the 2020 season, when he sustained a ugly-looking shoulder injury in Miami’s 33-27 loss to the Kansas City Chiefs on Dec. 13, 2020. In the 19 games he had played up until the play, which forced him to miss the following week’s game, Gesicki had pulled in 11 touchdowns and averaged a robust 13.10 yards per reception (878 in 67 catches). However, in the 20 games afterward, Miami’s franchise-tag player has found the end zone only two times and seen his per-catch average plummet to a pedestrian 10.63 yards (882 yards in 83 receptions).

During the four-game win streak against the Patriots, Xavien Howard has been in on a turnover in each game

In the December 2020 matchup, the Dolphins took a 7-6 lead in the third quarter. Two plays later, Cam Newton connected with Jakobi Meyers on a 20-yard strike near midfield. Howard poked the ball out as Meyers attempted to change direction, and Elandon Roberts recovered en route to a 22-12 victory. Then, in the season opener last year, Howard made the play of the game. New England who had chipped away at a 17-10 Dolphins lead and trailed only 17-16 with a first-and-10 at the Miami 11 with 3:35 left in the game. That’s when Howard dislodged the ball at the 9. Instead of a gimme go-ahead field goal attempt, or a touchdown, the Dolphins were able to get a first down, force the Patriots to spit up their three timeouts, and then clinch it with a 2-yard Jacoby Brissett quarterback sneak on a third-and-1 that led to the two-minute warning and last year’s Dolphins 1-0 record. In the season finale, Howard, watching Mac Jones stare down intended target Meyers, broke off his coverage of Nelson Agholor and jumped the short route, snaring the pass, making a move on the sedentary Jones and cruised into the end zone to give Miami a 14-0 lead, en route to a 33-24 victory. Finally, on Sunday, the X-Man outbattled former teammate DeVante Parker on a looping Jones pass in the end zone on the game’s opening drive and punched the ball into the air, giving Jevon Hollard one of the easiest interceptions he will have in his career.

On Sept. 3, 2000, the Dolphins shut out the Seattle Seahawks 23-0. That had been the last time the defense had allowed a net 0 points to start the season (defensive points allowed minus defensive points scored) before Sunday.

In his past 17 games, the Patriots’ Mac Jones has 20 turnovers, but that number is much worse at Hard Rock Stadium. In his two career games in Miami Gardens, Jones has four turnovers, two of them for Dolphins touchdowns, and another happening with the Patriots in field goal range.

With barely any yardage gained in the middle of the line, the Dolphins were held to 65 rushing yards. Miami, in Tua Tagovailoa’s first two home starts against Bill Belichick, had averaged 222.5 running yards per matchup. Adding the 65, drops that average to a still-impressive 170.0 per matchup at Hard Rock Stadium in the Tua era.

The last time the Dolphins beat the Patriots by more than the 13 points that they won by on Sunday was the famous 38-13 Wildcat Beantown Beatdown, almost 14 years ago. The Dolphins also won by 13 in 2014 in Miami Gardens (33-20).

The loss made Belichick 2-8 the past decade in Miami Gardens, and keeps the six-time Super Bowl champion coach 26 wins from tying Don Shula atop the all-time wins list.

However, Miami and the Los Angeles Chargers are the only ones who won their season openers at home. The teams who have that road-heavy remaining imbalance who are 0-1? The Cincinnati Bengals, New York Jets and Tennessee Titans. The Houston Texans also hosted, but tied the Colts 20-20. Conversely, there are six NFC teams who have nine home games left in their remaining 16. The NFC teams who won their season openers on the road and have a degree of an advantage now (on paper)? The Tampa Bay Buccaneers, New Orleans Saints, Philadelphia Eagles and New York Giants. Meanwhile, the San Francisco 49ers and Green Bay Packers lost their 2022 debuts on the road.

The Dolphins head to a franchise house of horrors for Week 2. Miami is 0-4 all-time at Baltimore’s M&T Bank Stadium, and the results haven’t been close, getting progressively worse in each matchup (losing by seven in 2005, 16 in 2010, 32 in 2016 and 40 in 2017). The one silver lining is that Brian Flores’ defense gained a bunch of confidence last season when it locked down then-MVP candidate Lamar Jackson and the Ravens to 10 points, while tacking on a Howard pick-six, as Miami won by 12 points for the second straight win in what would grow to a seven-game win streak.