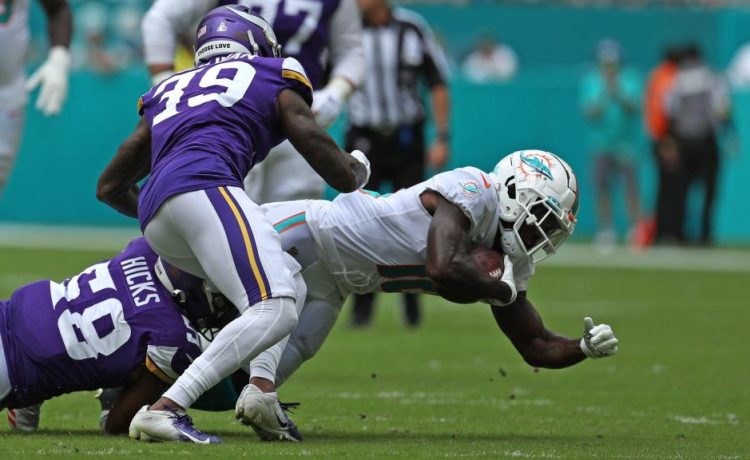 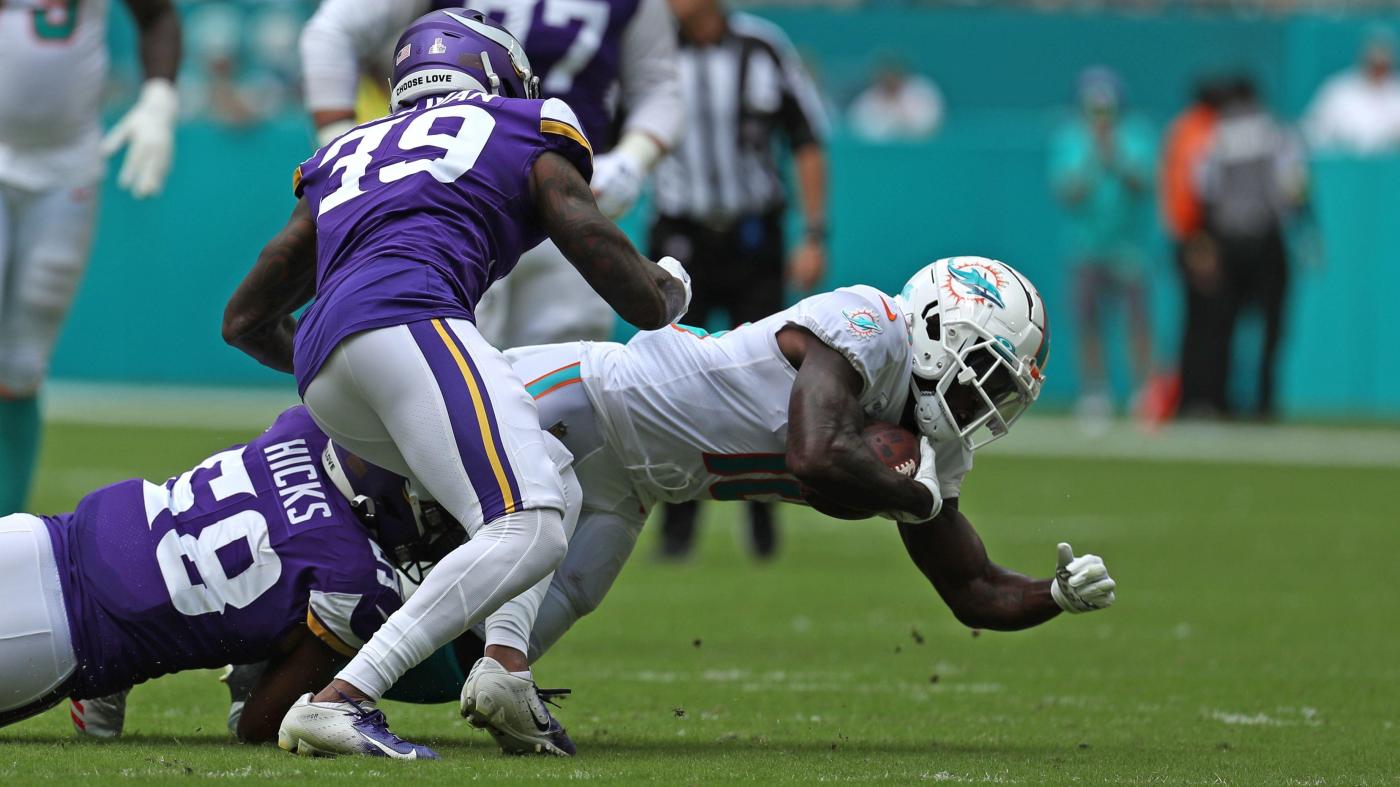 Here are some of the top takeaways from the Miami Dolphins’ loss to the Minnesota Vikings at Hard Rock Stadium:

The Dolphins had nine penalties for 92 yards one week after having 11 penalties for 102 yards against the Jets. Against Minnesota, the Dolphins had a second-quarter drive that included five penalties for 36 yards. They had an ineligible man downfield, pass interference, two holding and a false start. The penalties took the Dolphins out of field goal range. Later in the second quarter a 24-yard gain was aided by a roughing-the-passer penalty that gave the Vikings half the distance to the goal. They scored one play later. In the fourth quarter guard Robert Hunt was called for holding to force at first-and-20 from their own 48. Although it wasn’t Hunt’s fault, the possession resulted in a lost fumble by Jaylen Waddle that Minnesota turned into a 24-10 lead. Keep an eye penalties going forward.

The Dolphins went 2-1, defeating New England and Buffalo and losing to Minnesota, with the NFL’s best homefield advantage. This was likely the final game with the infamous South Florida humidity. The next home game is next week’s Pittsburgh game, which is an 8:20 p.m. kickoff. After that, we’re into November and its likely great weather with the Browns game on Nov. 13. Sunday’s game didn’t provide much of an advantage because it was cloudy for much of the game. But at kickoff it was 85 degrees with 65% humidity and a feels like temperature of 91 degrees, which was good enough to make life a bit tougher on the Vikings. By the way, the humidity might have gotten the best of Dolphins wide receiver Tyreek Hill, who had to go to the locker room in the third quarter because of cramps. He also had problems with cramps at Baltimore. But Hill ended the Vikings game with 177 yards on 12 receptions.

The Dolphins held Vikings running back Dalvin Cook, who attended Miami Central High, under control. Cook finished with 77 yards on 13 carries, much of it after the game was decided in the fourth quarter, in his homecoming game. The Dolphins’ run defense, led by tackle Christian Wilkins, clamped down on anything the Vikings attempted whether it was up the middle or on the edge. The Dolphins entered the game 13th in run defense at 110.0 yards per game. Minnesota ended with 82 yards rushing on 16 carries.

The Dolphins were without left tackle Terron Armstead, their best lineman, and it showed. Thompson was knocked out of the game in the second quarter with a right thumb injury on a hit from linebacker Jordan Hicks as pass protection was shaky. Thompson absorbed two sacks and 16 hits last week at the Jets. Dolphins quarterbacks were under pressure all game Sunday by the Vikings, who sacked Bridgewater five times and had him constantly under pressure. The Dolphins put Brandon Shell at right tackle, his usual spot after having him make his NFL debut at left tackle last week. The Dolphins put Greg Little, who had been starting at right tackle in place of Austin Jackson, at left tackle. Still, pass protection, which also involves tight ends and running backs, didn’t improve much.

Credit Gesicki for his good attitude. Gesicki, who finished with a season-best (six receptions, 69 yards, two touchdowns) had a 4-yard touchdown reception with 10:04 remaining in the fourth quarter and revisited the Griddy, the social media dance that he attempted unsuccessfully but humorously after a touchdown at Baltimore. Gesicki, who had lots of fun with social media making fun of his Griddy attempt earlier in the season, did the dance all the way from the end zone to the sideline Sunday. It was enjoyed by all.

McDaniel has no fourth-down fear

Dolphins coach Mike McDaniel is a heckuva play-caller and a heckuva gambler. He called a comeback pass to Hill in the fourth quarter on a fourth-and-5 from the Dolphins’ 48-yard line. The Dolphins trailed, 16-10, at the time and a touchdown would have provided the game-tying points with the extra point giving the go-ahead points. Hill made a nice grab on a 14-yard reception to the Vikings’ 48-yard line on a pass from Bridgewater, but Waddle’s lost fumble with 4:10 left ended the drive.

Cornerbacks Nik Needham (ankle) and Keion Crossen (knee), Thompson (right thumb), and linebacker Trey Flowers (foot) left the game and didn’t return. Defensive lineman Emmanuel Ogbah (back) left the game but returned. These injuries have been piling up at an alarming rate the past three weeks or so. It’s been most notably the quarterbacks but the Dolphins started the Vikings game without Armstead (toe), cornerback Kader Kohou (oblique) and quarterback Tua Tagovailoa (previously in concussion protocol). Jackson (ankle) was eligible to come off the injured reserve last week but apparently wasn’t ready. Cornerback Byron Jones (leg) has been on the physically-unable-to-perform list since the season started. He was eligible to be activated two weeks ago but isn’t ready.

Jason Sanders missed a 52-yard field goal attempt wide right late in the second quarter. That followed safety/punt returner Jevon Holland muffing a punt in the first quarter that linebacker Jaelan Phillips recovered. In the third quarter the Dolphins attempted a fake punt on fourth-and-1 from their own 34-yard line but safety Clayton Fejedelem was tackled for no gain. You know the list by now: 103-yard kickoff return touchdown by Baltimore, the “butt punt” against Buffalo, the missed extra point and a blocked 52-yard field goal attempt against Cincinnati, and wide right on a 54-yard field goal attempt against the Jets. The Dolphins gave up a 25-yard punt return in the third quarter.

How was Connor Williams illegally downfield on a pass that was out in two seconds?

Of the disgraceful five penalties on the Dolphins’ second possession (you remember, the drive where twice it appeared Miami had first-and-goal situations), the flag against center Connor Williams was just inconceivable. Skylar Thompson dropped back and fired quickly down the left side to Chase Edmonds to the Vikings’ 7 for a seeming first down. Despite the rapidity of the throw and it not being a screen pass, Williams still meandered downfield and got the massive play negated. The import from the Dallas Cowboys was flagged 17 times last season. He has four penalties this season, so he is on pace for double-digits again. Can’t happen. Especially on inconceivable non-contact penalties. — Steve Svekis

Time to bring in a kicker for a tryout?

With Jason Sanders’ 52-yard second-quarter shank, he plummeted to 2 for 9 on kicks from at least 50 yards, after having been 12 for 15 from such distance in the first three years of his career (2018-20). A team with a kicker whose reliablility evaporates outside of 49 yards is a team with a hobbled offense.

The Vikings’ skid in South Florida ended, leaving only one NFL team without a win in Miami Gardens

The amount of playing time since the Dolphins’ first interception of the season, 5:08 into the season opener against the New England Patriots has stretched to 354 minutes and 52 seconds. The previous long such drought in a single season is the 386:19 from 2011.

The Dolphins falling to 3-3 after a 3-0 start isn’t unprecedented, but it has been rare

More than one-third of the Dolphins’ 2021 schedule was pockmarked with teams who would go on to win five games or fewer (there were six such games). Especially with Jets’ vast improvement, the 2022 schedule has become much more rigorous. However, the Steelers, with superstar T.J. Watt sidelined by an injury, are a team bereft of talent to a degree where a six-win season would be a plesent surprise. Entering their Week 6 matchup against the Tampa Bay Buccaneers, Pittsburgh’s offense was averaging 14.0 points a game and the Steelers have begun the starting career of rookie quarterback Kenny Pickett. Pickett, known for having small hands for an NFL quarterback (measured at 8.5 inches at the 2022 NFL Combine), had played a game and a half going into Week 6 and had generated 17 points while the offense spit up five turnovers, including four Pickett picks.