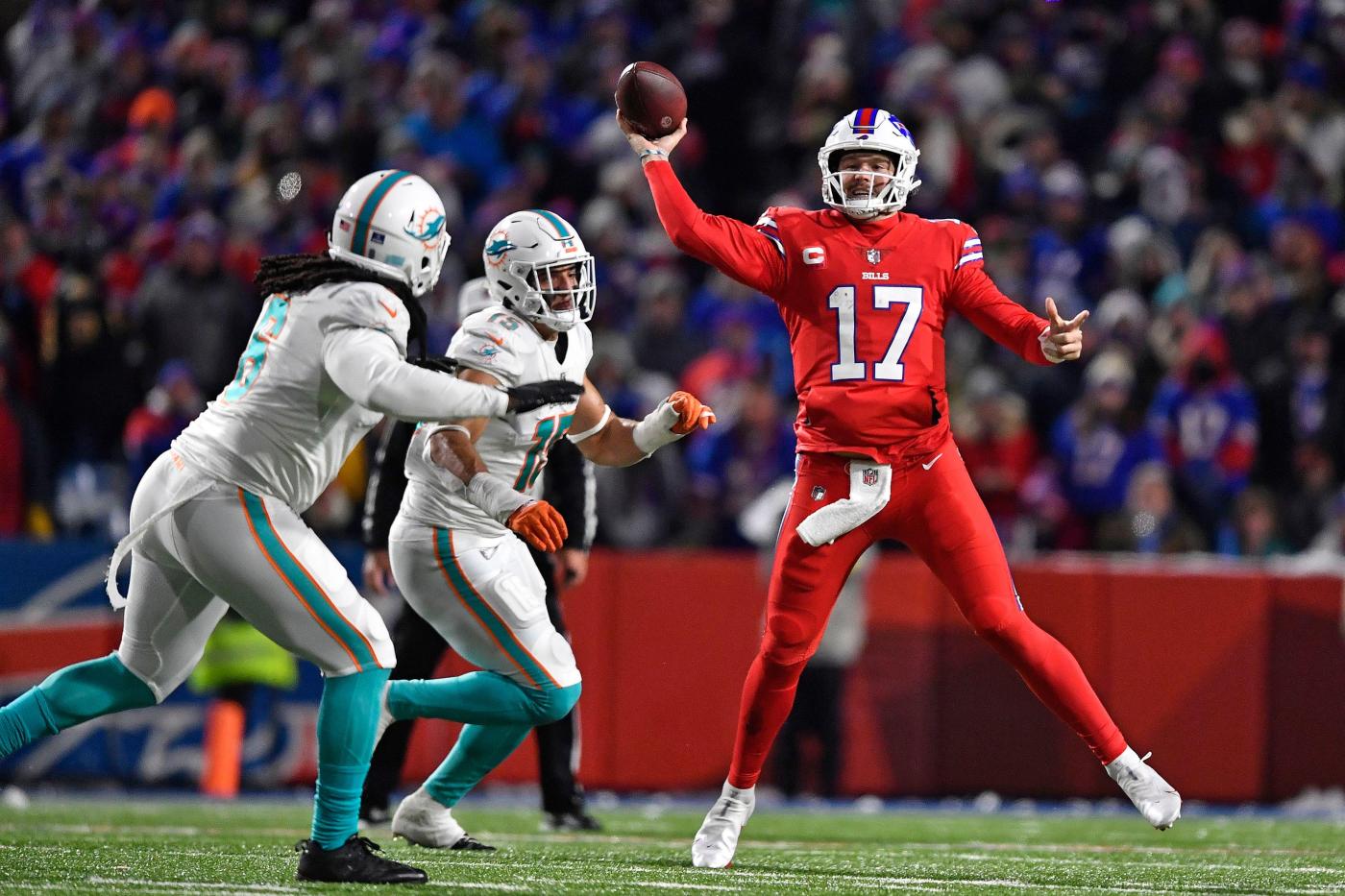 The Dolphins entered their game against Buffalo riding back-to-back losses while the Bills were on a four-game winning streak. Here are some of the top takeaways from the Miami Dolphins’ 32-29 loss to the Buffalo Bills, who clinched a playoff berth with the victory, at Highmark Stadium on Saturday:

Weather as a (non) factor

It turns out both the Dolphins (8-6) and Bills (11-3) had homefield advantages in their home games against each other this season. And for all the weather hype about Highmark Stadium receiving lots of snow and a wintry mix of snow and rain or sleet Saturday, none of that happened even though snow began falling in the fourth quarter. Saturday’s temperature at kickoff was 29 degrees. It was almost a beautiful day in Buffalo with occasional sun but not much snow, wind or rain. There were some bursts of heavy snow but the lake-effect snow that threatened to dump double-digit snowfall amounts never materialized. For the record, the temperature at Hard Rock Stadium for the Dolphins’ 21-19 victory on Sept. 25 was 89 degrees with 63% humidity. Numerous Bills players fell victim to the heat and humidity. No Dolphins players succumbed to the cold Saturday. — Chris Perkins

Defense makes its mark in second half

The Dolphins’ oft-criticized defense came alive in the second half with sacks, turnovers and key plays. The Bills’ first five second-half possessions were punt-punt-punt-punt-lost fumble. Still Buffalo, which rushed for 150 yards, was able to dig out the hard-fought victory with a touchdown and field goal on its final two possessions. Give the defense credit for hanging tough. But Buffalo’s game-winning drive was 15 plays covering 86 yards and consumed 5:56. The Dolphins defense wasn’t good enough to make stand at the end but overall it played admirably.

Quarterback Tua Tagovailoa didn’t seem to be bothered by the cold temperature as he had touchdown passes of 67 yards (to Jaylen Waddle) and 20 yards (to Tyreek Hill) and ended 17 of 30 for 234 yards, two touchdowns, no interceptions and 104.0 passer rating. All the chatter about how Tagovailoa had trouble playing in cold weather was overblown. He started a bit slowly with some inaccurate passes but got things straightened out eventually. Tagovailoa entered the game 0-3 in starts in which the temperature is 45 degrees or below — Tennessee (2021), Denver (2020) and Buffalo (2020). It didn’t seem cold weather was a factor Saturday in Tagovailoa’s performance.

Snowballs can be fun … and punitive

Several Dolphins players expressed frustration that fans were allowed to throw snowballs throughout most of the game. The Dolphins players didn’t blame the fans. They said such behavior is expected when you have a stadium full of snow. However, they wished they were granted more protection. At least one player said he was hit by a snowball. Highmark Stadium might have had between six and eight inches of snow in the stands when fans were admitted. Buffalo fans dotted the field with snowballs throughout the first half, and at one point in the second quarter the stadium announcer asked fans to stop, and then the referee announced if a snowball hits someone it’s a 15-yard penalty against the Bills. Fans booed and continued to occasionally throw snowballs on the field, sometimes landing feet away from the referees, but the snowballs didn’t seem to hit anyone so there was no penalty. Even after Buffalo’s touchdown to end the second quarter, when snowballs rained upon the Dolphins’ bench no penalty flags were thrown. It can’t be confirmed if any players were hit but it’d be tough to believe the avalanche of snowballs could have missed every Dolphins player.

The Dolphins secondary, which was injury-strapped, did its best Saturday. It entered the game without defensive backs Eric Rowe (hamstring) and Elijiah Campbell (concussion), and when safety Jevon Holland (neck) went out in the second quarter they were really stretched thin. It showed. Every active defensive back — Kader Kohou, Xavien Howard, Keion Crossen, Noah Igbinoghene, Justin Bethel, Clayton Fejedelem and Verone McKinley III — got significant playing time. Bills quarterback Josh Allen riddled the secondary. Holland returned to start the third quarter. But the Dolphins, who entered the game ninth in pass defense at 242.5 yards allowed per game, were hard-pressed to meet the challenge of the Buffalo offense, which totaled 296 passing yards and four touchdowns. A late-game pass interference by Kohou helped the Bills ice the victory.

Wide receivers have game-breaking showing, but …

Both Tyreek Hill and Jaylen Waddle had touchdown receptions Saturday that highlighted their importance to the offense in the sense the Dolphins are always capable of staying in a game because of their big-play abilities. But fellow wide receiver Trent Sherfield had a costly dropped potential touchdown pass on a well-thrown low pass in the second quarter. Still, it was a nice showing by the wide receivers. Waddle ended with three receptions for 114 yards and one touchdown, a 67-yarder, and Hill ended with nine receptions for 69 yards and a 20-yard touchdown reception. Yeah, there were some dropped passes but the wide receivers weren’t the reason the Dolphins lost.

Running back Raheem Mostert had a season-best 17 carries for 136 yards, including seven carries for 101 yards in the first quarter as the Dolphins committed to running the ball early. Mostert said the run-game success “allowed us to open up a little bit more in the pass game.”. The Dolphins, who were without running back Jeff Wilson Jr. (hip) against Buffalo, entered Sunday’s game 29th at 89.8 yards per game and 31st in rushing attempts at 288. Saturday’s game represented a big change from the immediate past. The Dolphins had 27 rushing attempts the past two games — 19 against the Los Angeles Chargers and eight against San Francisco — for 132 yards. The run game paid off big time as the Dolphins found another way to gain yards and keep the defense off balance.

The Dolphins pass rush was slow to get to Buffalo quarterback Josh Allen, who played spectacularly, early in the game. Allen ended 25 of 40 for 304 yards, four touchdowns and a 119.2 passer rating. But the Dolphins defense eventually got to him here and there in the fourth quarter as linebacker Jaelan Phillips had a caused fumble that was recovered by defensive tackle Christian Wilkins. Still, Allen, who had 10 carries for 77 yards, caused major headaches, especially when he ran the ball, and especially on his game-tying two-point conversion run that knotted the game at 29 in the fourth quarter. Allen was 11 of 14 for 166 yards, two touchdowns and a 155.7 passer rating midway through the second quarter, a time when the Dolphins had no sacks, no quarterback hits and no passes defended. He added a 44-yard run in the fourth quarter before the Bills tied the game at 29.

Dolphins on third down

Dolphins in December and other ugly numbers

When Bills finally got Dolphins’ offense off the field, Miami got consecutive humongous punt plays

The punt by Thomas Morstead that was a net 59 yards to the Buffalo 2 was the special teams moment of the year. Tilting the field severely in a two-point game, Morstead’s bomb was followed by a three-and-out and the Dolphins gaining a net 11 yards in the exchange of punts. Then, after Miami followed with its own three-and-out with no yards gained, Morstead absorbed a huge hit and got a roughing the punter flag, setting up the Dolphins with the go-ahead score late in the third quarter. Morstead’s sequence was a huge reason Miami had a chance. — Steve Svekis

By allowing 32 points in Buffalo, Miami set a club record for most road games in a row with their defense allowing at least 23 points, with nine. They had been tied with an eight-game run from 2018-19. Their defense also allowed at least 26 points for the seventh time this season, setting a single-season club record in that realm.

The Bills quarterback extended his home win streak against Miami to five games. There is no Bills quarterback who can claim any sort of run like that. Jim Kelly? He never won more than two in a row at home against the Dolphins. Allen was good in the passing game again, but he has been lethal with his feet. With 10 carries for 77 yards Saturday night, Allen has 266 rushing yards in 29 career carries (non-kneeldowns) against the Dolphins in Orchard Park.

Dolphins still control whether they are a playoff team

First of all, Miami can still win the AFC East and get at least one home game in the playoffs, but it will take the near-miracle of the Dolphins finishing 3-0 and the Bills losing their final three games (at Bears, at Bengals, Patriots). If the Dolphins lose to the Packers but then finish at 10-7 with wins at New England and then at home against the Jets, they are guaranteed a playoff spot. The 17th game, against the Jets, is the most important of the remaining three for the Dolphins to win.

There is so much talk about the Dolphins having missed out on a worthy successor to Dan Marino through the years, primarily with Drew Brees in 2001, and then again in 2006, and then Matt Ryan in 2008. But the Dolphins also desperately needed a quarterback in 2005 when they picked running back Ronnie Brown at No. 2 over Aaron Rodgers, who famously and uncomfortably plummeted to the 24th pick, where Green Bay snapped him up and had him sit behind Brett Favre for three seasons. On Christmas, Rodgers is scheduled to make his second career visit to Miami Gardens. In 2014, he led the Pack to a 27-24 win, throwing three touchdown passes and not turning the ball over.