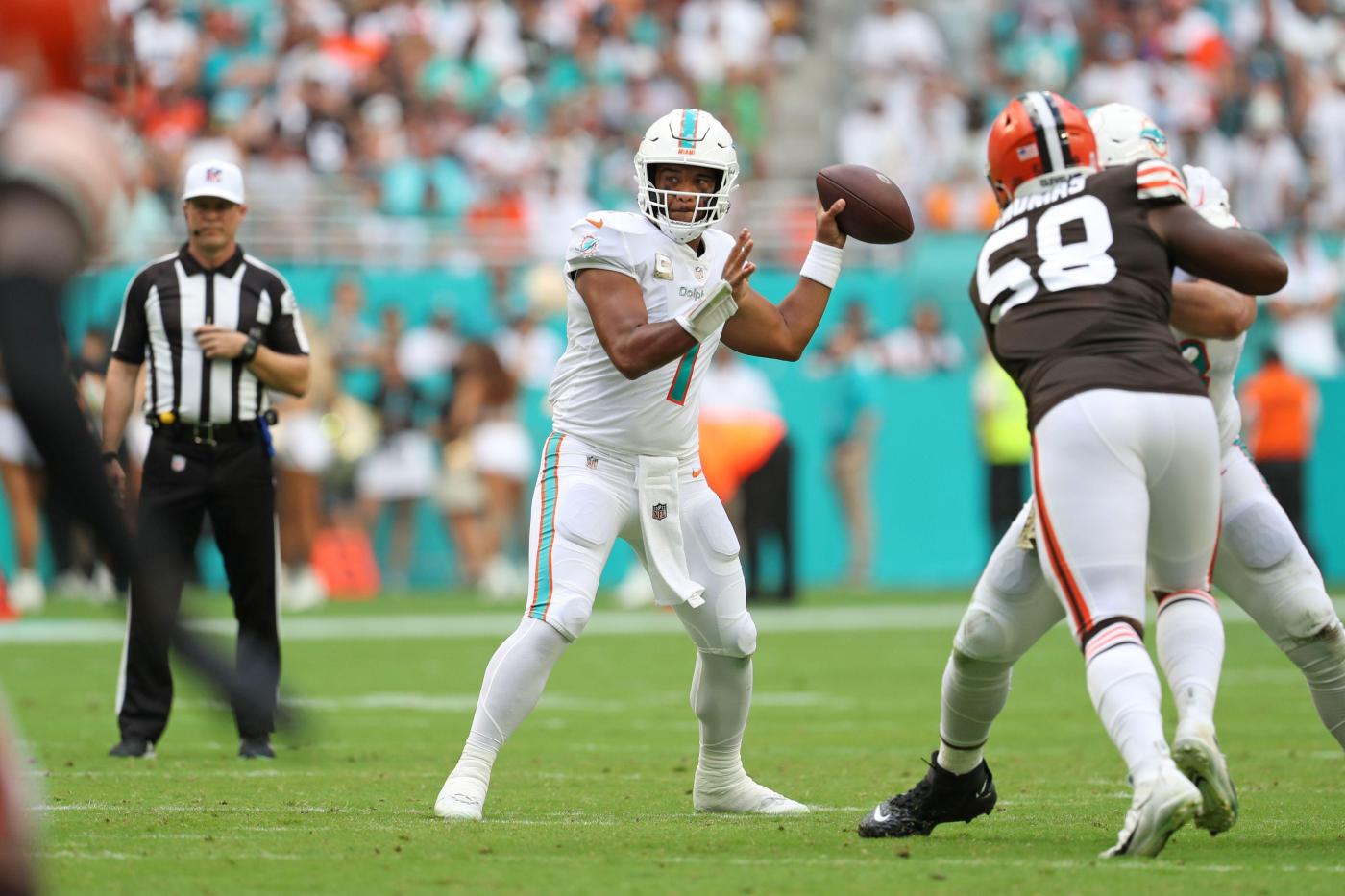 Here are some of the top takeaways from the Miami Dolphins’ 39-17 win over the Cleveland Browns at Hard Rock Stadium on Sunday:

Quarterback Tua Tagovailoa got a “MVP!” chant in the third quarter from the crown at Hard Rock Stadium. Tagovailoa was 25 of 32 for 285 yards, three touchdowns and no interceptions for a 135.0 passer rating. Tagovailoa entered the game with a league-best 115.9 passer rating. Tagovailoa would have had a touchdown to Jaylen Waddle but Grant Delpit made a shoestring tackle to hold it to a 29-yard completion. Tagovailoa continued making good decisions, too. There weren’t any near-interceptions such as the Pittsburgh game and he placed the ball almost perfectly on every throw. It’s a nice way to cap a strong three-game performance heading into the bye week. — Chris Perkins

Dolphins can run the ball

The Dolphins rushed for a season-best 195 yards. Jeff Wilson Jr. rushed for a head-banging 119 yards, providing the offense the physical presence it needed in the backfield. It was the second time the Dolphins had a 100-yard rusher this season, joining Raheem Mostert’s 117-yard effort against the New York Jets. Mostert and Wilson had it going all game. They combined for 48 rushing yards on six carries in the first quarter and 87 yards on 13 carries in the first half (tight end Durham Smythe had one carry for no yards). Yeah, Wilson was stopped on a fourth and one from the Cleveland 14-yard line in the second quarter but the running game, behind good blocking up front, received a jolt of energy from Wilson, the trade deadline acquisition, and Mostert, his San Francisco teammate, ran with purpose against Cleveland. That’s what was needed from a running game that started the day 29th at 86.9 yards per game.

The defense had its miscues, especially on the 33-yard touchdown run by running back Nick Chubb (11 carries, 63 yards). But it came to play. Chubb entered the game with 841 yards rushing, second in the league. The defense recorded three sacks, kept pressure on quarterback Jacoby Brissett, and on the back end the secondary featured cornerback Xavien Howard shadowing wide receiver Amari Cooper (three receptions, 32 yards). The first quarter sack by Christian Wilkins and Bradley Chubb, and then the caused fumble by defensive tackle Zach Sieler and recovery by linebacker Jaelan Phillips were a good start, especially after allowing the game-opening touchdown drive that included a 38-yard completion on the first play from scrimmage. But the defense also finished. That’s the key.

Penalties surfaced again, and then disappeared

The Dolphins ended with five penalties for 43 yards. There was the neutral zone infraction and then the pass interference. At that point you were thinking the Dolphins might fall back into bad habits. The Dolphins entered the game sixth for most penalty yards (454) and sixth for most penalties (58). Christian Wilkins was called for a debatable roughing the passer penalty in the third quarter. And wide receiver Trent Sherfield was called for taunting after a 21-yard completion in the fourth quarter. Neither was a huge deal. And for the most part the Dolphins did well at keeping the penalties in check.

Within the strong play of the defense the front seven led the way, something that’s needed with an injury-depleted secondary that lost cornerback Keion Crossen (shoulder) in the third quarter. Bradley Chubb, Phillips and Wilkins were all strong in the first half. One one second quarter pass attempt, both Bradley Chubb and Phillips attracted penalties. Bradley Chubb had a holding and Phillips had a tripping. The next play Phillips attracted a holding call. Wilkins was a beast against the run and pass. And defensive tackle Zach Sieler caused a fumble that was recovered by Phillips. The strong play kept going in the second half despite the loss of linebacker Emmanuel Ogbah (elbow).

Touchdowns by fullback Alec Ingold, wide receiver Trent Sherfield and Mostert show this offense has scoring options aside from wide receivers Tyreek Hill and Jaylen Waddle. Ingold stretched and dove into the end zone in the same fashion Jeff Wilson did a week ago in Chicago for a 13-yard touchdown reception. Sherfield got both feet down in the back of the end zone after bringing in a pinpoint-accurate pass by Tagovailoa. Mostert used his speed to dart into the end zone to cap a 24-yard scoring run. By the way, Hill had five touches (five receptions, 44 yards) and Waddle had four (four receptions, 66 yards). And the Dolphins won.

The Dolphins were 1 for 2 in the first half on fourth downs, and perhaps there’s room to question coach Mike McDaniel’s decision to run it up the middle on a fourth down attempt. They didn’t convert on that run up the middle by Jeff Wilson Jr. He was stuffed by Delpit and linebacker Jordan Kunaszyk. It was the third consecutive run up the middle following runs by Smythe (direct snap) and Mostert. But Jeff Wilson converted a fourth and one from the Dolphins’ 36-yard line in the first quarter when he went off right tackle for four yards. The Dolphins scored four plays later when Tagovailoa hit Ingold for a 13-yard touchdown. The Dolphins are now 6 of 13 on fourth downs this season.

Kicker Jason Sanders missed an extra point wide right late in the third quarter and another wide right in the fourth quarter. Add to that Cleveland’s game-opening 48-yard kickoff return and you have more reasons for concern about special teams. And, yes, injuries to players such as tight end Hunter Long (concussion protocol) and cornerback Keion Crossen (shoulder) will further cut into special teams play. But those injuries – Long was injured last week at Chicago and didn’t play against Cleveland; Crossen was injured in the third quarter vs. Cleveland – didn’t have anything to do with the kickoff return or the missed extra point. Sanders, who made two field goals Sunday, has now missed three extra points this season (27-30) and is 13 of 17 on field goals with three misses from 50 or more yards, including one that was blocked.

Terron Armstead does it again

Did Cleveland All Pro edge rusher Myles Garrett play Sunday? We didn’t hear his name. That’s because Dolphins left tackle Terron Armstead is a stud. Armstead, playing despite a toe and calf/Achilles injury, was a brick wall against Garrett, who entered the game with 7.5 sacks, sixth in the NFL. Armstead has recently held Chicago linebacker Alex Highsmith, Detroit edge rusher Aidan Hutchinson and, now, Garrett to quiet days against the Dolphins. If Armstead is able to play and keep his ailments in check, the offensive line will likely have a good day.

This is a promising sign for the offense. Hill only had five receptions for 44 yards while Waddle had four receptions for 66 yards. But Tagovailoa passed for 285 yards and three touchdowns, and Wilson rushed for 119 yards, Mostert rushed for 65 yards, eight players had at least one reception. Oh, and the offensive line only allowed one sack, and that was on a trick play in which wide receiver Cedrick Wilson Jr. attempted a pass. Nice showing.

Tua Tagovailoa’s interception-less streak keeps chugging along. How does that stack up?

The Dolphins quarterback set a high bar for himself to start his career, throwing his first 152 career passes without one being picked off, but his personal record and the franchise record will be in his sights against Houston. Since an interception Sept. 29 in Cincinnati, Tagovailoa has thrown 138 consecutive passes without turning the ball over. Unsurprisingly, Dan Marino holds the Dolphins’ record for length of a single-season streak of passes without an interception, with 156 in 1997. However, the quarterback with the longest streak (it spanned from the end of one season to the next year) is Ryan Tannehill, who threw 160 such passes spanning the end of the 2014 season and beginning of the 2015 campaign. So, if Tagovailoa is clean in that area of the stat sheet after his 23rd pass on Nov. 27 against the Texans, all those marks will fall. — Steve Svekis

Browns blitzed more than any team had in almost two months

Through the first three quarters Sunday, the Browns had blitzed Tua Tagovailoa eight times in his 28 dropbacks (28.6% of the time), and it ended up at 25.0% (8 of 32). It was the most blitzing Tagovailoa had seen since Week 2 in Baltimore. Up to that point of the 48-yard Tyreek Hill touchdown reception from Tagovailoa against a Ravens six-man blitz, defenses had blitzed the Dolphins quarterback 29 times in his first 80 dropbacks (36.3%). But since the Ravens’ game-turning, unsuccessful six-man rush, Tagovailoa has now faced 28 extra-man rushes in Miami’s 178 dropbacks (15.7%), giving him a cumulative 22.1% blitz rate for his first eight games.

On the opening kickoff, Jason Sanders must get touchbacks

The Dolphins have won the coin toss nine out of 10 times, which is its own incredible happenstance. That has meant that they have kicked off nine times. One seven of those occasions, Jason Sanders has blasted the ball for a touchback. And, the two game-opening kickoffs that have been returnable? They have been returned a combined 151 yards, one for a 103-yard TD. On either of those kickoffs against the Ravens and Browns, a kickoff out of bounds, giving those teams the ball at their 40 would have been better results.

In Tua’s career, non-offensive touchdowns have been off the chain

One thing is inarguable when looking at the three quarterbacks picked in the top six picks of the 2020 draft: Tua Tagovailoa has had, by far, the most scoring help via return touchdowns. In a truly stunning statistic, the Dolphins, in the almost 28 full games (27.58) when No. 1 has been taking the snaps, has taken it to the house a whopping 10 times. That amounts to .363 touchdowns per game. Among the other class of 2020 quarterbacks, it is a runaway, with the Chargers’ Justin Herbert having enjoyed four non-offensive touchdowns in his 40.00 games (.100 a game) and the Bengals’ Joe Burrow with 1 in his 33.88 games (.030). Tom Brady, who has played 318.70 regular-season games after his win over Seattle in Germany on Sunday morning, has seen 85 non-offensive TDs on his teams’ behalf during his career, a healthy .267 himself.

The Texans are the opponent most tailor-made for a Dolphins rout. They have a promising young running back in ex-Florida Gator Dameon Pierce, and talented-but-long-in-the-tooth edge pass rusher in Jerry Hughes, and not a whole lot else.