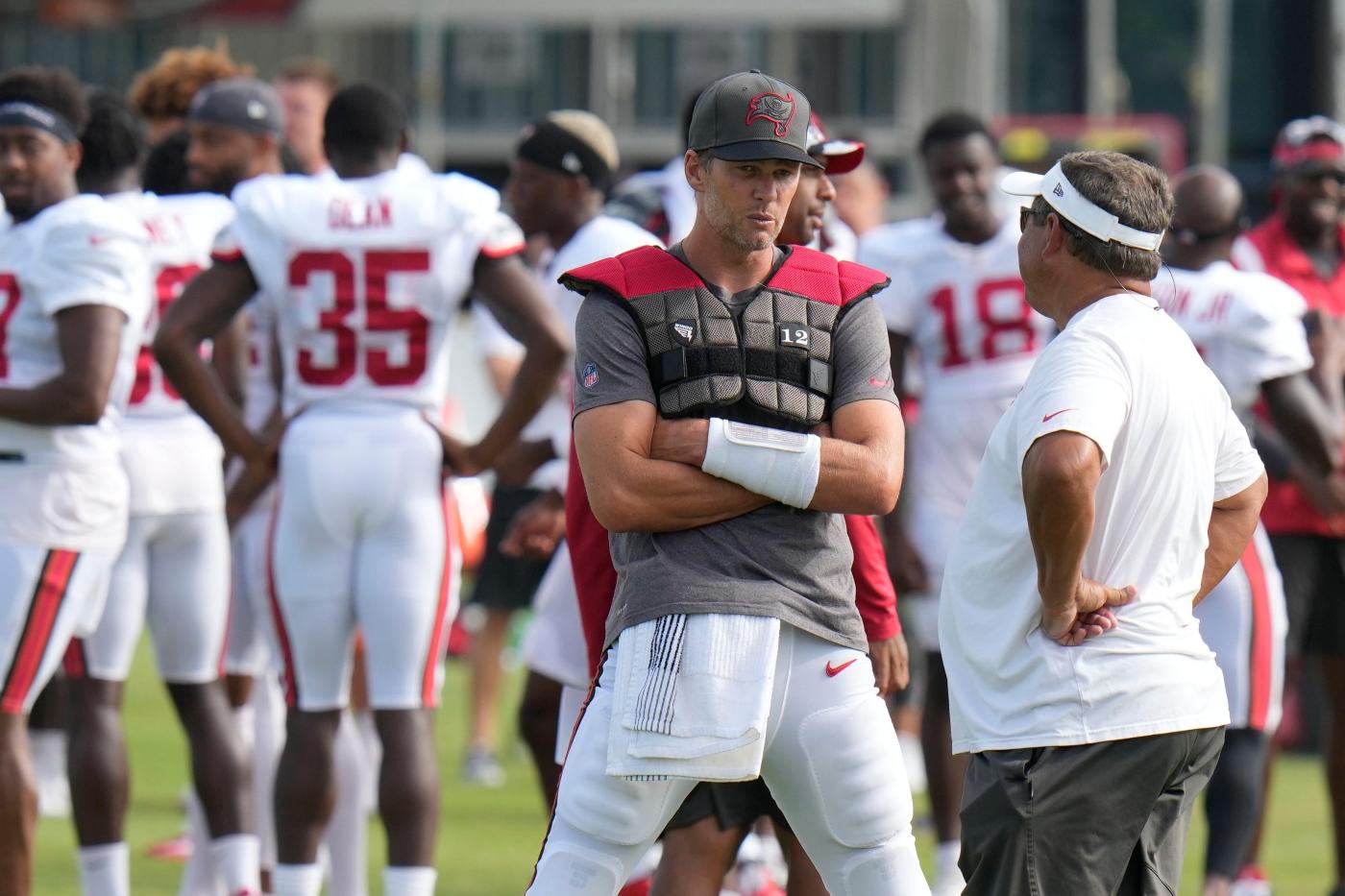 Tom Brady had the type of look on his face that screamed: “I need to speak to a manager.”

The Tampa Bay Buccaneers quarterback, a future first-ballot Hall of Famer who is in the discussion when it comes to the greatest quarterbacks of all time, stomped off the field following a third-down pass he was forced to threw away because of the pressure he was under and walked up to Bruce Arians as if the retired coach had a customer service badge on his team-issued gear.

Based on Brady’s mannerisms, Arians, who now serves as special assistant to the general manager after abruptly retiring as head coach of the Buccaneers this offseason, was clearly getting the brunt of Brady’s frustration following Wednesday’s joint practice with the Miami Dolphins.

Miami’s defensive front had its way with Tampa Bay’s offensive line, which is having its interior rebuilt after an offseason of free-agent defections, a retirement, and early camp injuries.

The Dolphins’ blitzes rushed Brady on several throws, the defensive front’s physicality limited Tampa Bay’s running, and Miami’s defenders would have produced a couple of sacks if the action were live, like it will be on Saturday night for each team’s first preseason game of 2022.

With the exception of three chunk passes Noah Igbinoghene allowed (he continues to struggle) and Tampa Bay’s effective screen plays where Brady was able to exploit Miami’s aggressiveness when it blitzed, Miami’s defense put together a respectable performance during the first of three times they will line up against the Buccaneers this week.

It was the type of practice which indicates that Josh Boyer’s unit might be ready to pick up where it left off last season.

And I’m not referring to 45-17 rout the Buccaneers handed the Dolphins in mid-October, scoring six touchdowns.

In that game Brady threw for 411 yards and five touchdowns, carving up the Dolphins secondary with Antonio Brown and Mike Evans, who each scored two touchdowns, taking advantage of Xavien Howard and Byron Jones not being fully healthy.

“That was on my mind 24/7. It still is,” Howard said, referring to the blowout after Wednesday’s practice. “That brings a little bit of fire to it. I feel like if you want to get motivated you can watch that game. The people that were there last year, and they see what they did to us.”

Of course this was just one practice, and a session where Evans and Chris Godwin didn’t participate because of their injuries. But for one day the Dolphins defenders were able to walk away with their heads held high.

Even the final situational period, where Brady’s unit was given a minute to drive 70-yards downfield to score a touchdown or a field goal, featured positive plays by Miami’s defense.

Emmanuel Ogbah tipped a pass at the line scrimmage on that drive, and then would have produced a would-be sack if the refs didn’t give Brady a favorable call, allowing him to complete a third-down pass after Ogbah had already slowed his pace.

“It’s all good. That’s what practice is for,” Ogbah said when asked about being slighted the sack. “We’ve just got to keep getting better even though they don’t count.”

The completion kept the drive alive and then Brady exploited Igbinoghene for a 20-yard comeback that put the Buccaneers in position to make a 47-yard field goal as time expired.

It’s obvious that the Dolphins defense has stuff they need to work on, schemes that need tinkering, rotations that need ironing out. But if frustrating Brady during a training camp joint practice is your starting point to the 2022 season then you’re in pretty good shape.

Completely healthy, this Dolphins defense should have very few weaknesses.

Howard and Byron Jones are two of the NFL upper-echelon cornerbacks.

And Ogbah, Jaelan Phillips and Melvin Ingram all have talent to become double-digit sack producers.

All Miami is missing is an inside linebacker who has the versatility to allow this hybrid scheme to really blossom. Only time will tell if Jerome Baker, Elandon Roberts, Sam Eguavoen, Duke Riley and rookie Channing Tindall can become that type of playmaker, which I believe will be needed for this unit into a top-five defense.

Maybe Brady’s conversation with Arians was about beefing up the interior of the Buccaneers’ offensive line, or maybe he was inquiring about when he’ll get Evans or Goodwin back on the field.

Only those two truly know what was said, but when a frustrated Brady is making a beeline to management, it’s safe to conclude that something Miami’s defense did against the NFL legend got under his skin.

Wednesday he was the first quarterback the Dolphins defense flustered in 2022, but hopefully Brady won’t be the last.