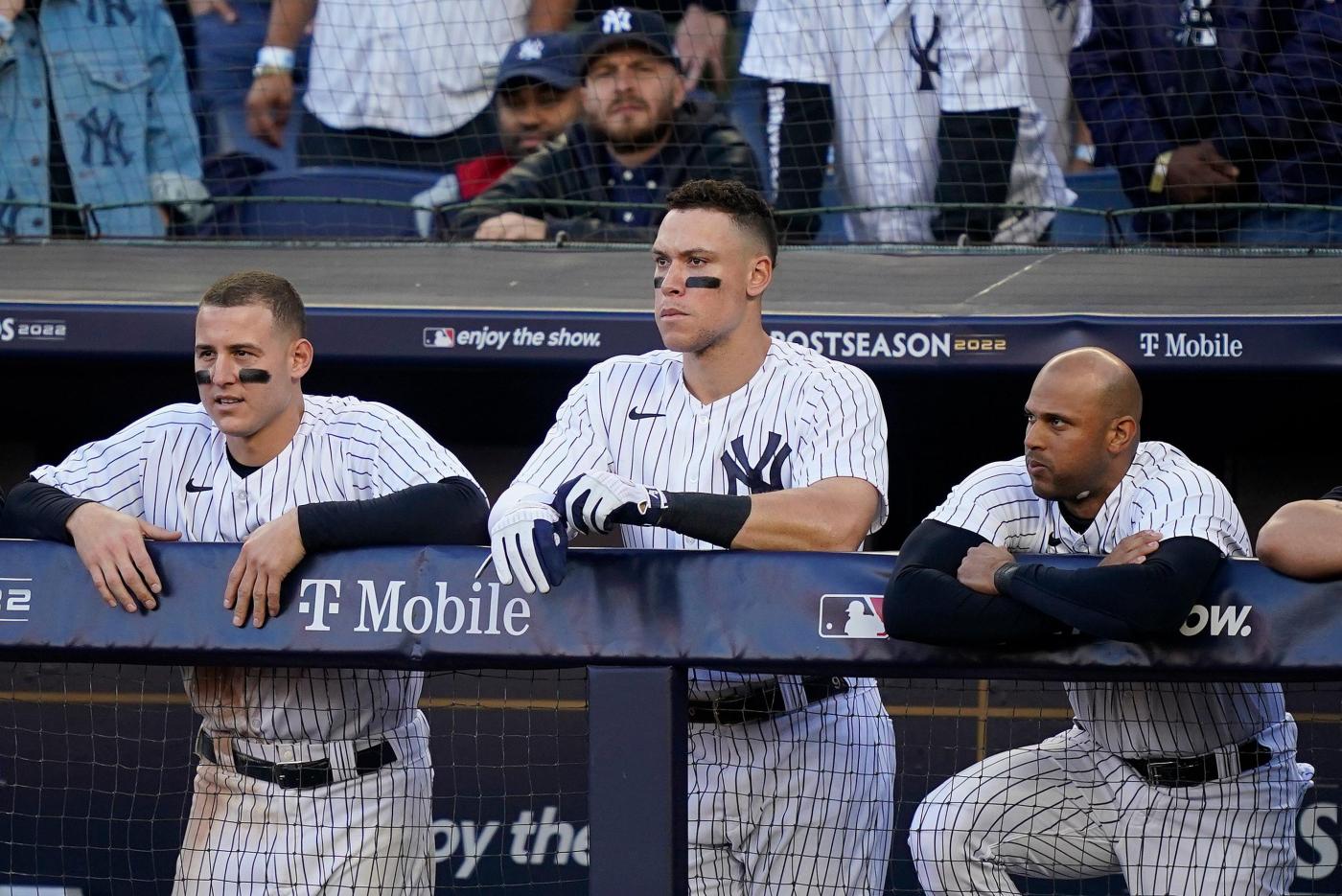 For the second consecutive season, the Yankees’ top-heavy offense capsized in the playoffs, likely instigating some sort of shakeup to next season’s lineup.

Each dying ember of belief during the American League Championship Series was crushed by Houston’s mighty arms. The Yankees were a very good hitting team during the regular season — top five in wRC+, on-base percentage, slugging percentage, walk rate, home runs and average exit velocity — but as the postseason will teach you, there’s always room to get better. In fact, the 2022 disappointment should teach the Yankees that getting better is a requirement, not a suggestion.

With a huge part of their offense strapped to Aaron Judge’s imposing shoulders, which carried them toward much of those top five rankings, the Yankees could easily be undone when Judge and his famous teammates slumped or got injured. An entire overhaul isn’t totally necessary. Again, the Yankees were what many teams strive to be in the batter’s box. But there are a few areas that are ripe for improvement. There are some in-the-weeds advanced stats that are a bit puzzling (for instance, the Yankees ranked 28th out of 30 teams in line drive rate) but three obvious things stand out when digging through this team’s offensive statistics.

This was a problem going into the year, and it never got better. Yankee shortstops slashed .247/.308/.316, which would have been a lot more palatable if they got trustworthy defense at the position. That’s essentially what happened at catcher, where Jose Trevino’s bat fell into the Harlem River after the All-Star break, but his receiving abilities behind the plate still made him an extremely useful player.

That wasn’t the case for the shortstops, a group composed mainly of Isiah Kiner-Falefa, Marwin Gonzalez and Oswald Peraza. Oswaldo Cabrera and Gleyber Torres combined to start four games there in the regular season, but that aforementioned trio is the reason for the frightful numbers, particularly Kiner-Falefa.

The Yankees were one of just seven teams with a collective shortstop wRC+ of 80 or worse. Being 20% worse than league average at a wildly talent-rich position is a complete failure of the organization. Everyone knows the story by now, how the Yankees passed on Carlos Correa, Corey Seager and Marcus Semien in free agency last winter to save money, plug a stopgap at shortstop, and wait for their prospects to arrive. Correa, Seager and Semien each posted a wRC+ of 107 or better, slugged .425 and popped at least 22 home runs.

Meanwhile, the guys the Yankees played at shortstop had an 80 wRC+, slugged an American League-worst .316 and hit four home runs, tied with the Nationals for fewest in the entire league. It didn’t have to be this way, but the Yankees chose to get cute. It’s still possible that this move will eventually pay off if Peraza or Anthony Volpe blossoms into something beautiful — Cabrera seems destined for a DJ LeMahieu-esque utility role — but prospects are far from a sure thing.

Soon-to-be free agents like Xander Bogaerts, Trea Turner or Correa, who’ll be on the open market again after opting out of his deal with the Twins, are about as sure as sure things get. Assuming the Yankees sit out the shortstop sweepstakes again, they’ll be in the exact same place they were last year when the entire city was up in arms: putting an unproven player at shortstop while the teams around them happily pay for better options.

Most of this is that the Yankees simply need more.

Only three AL teams had fewer plate appearances by left-handed hitters, a mind-blowing stat for a team whose right field fence is 314 feet away. While Anthony Rizzo’s slugging percentage made some of the other numbers look OK, the Yankees’ lefties had a dismal .214 batting average. With Rizzo expected to decline his player option and test free agency, there’s a world in which the Yankees lose their only truly convincing left-handed hitter.

One tantalizing solution to this has spent the last seven seasons in a different borough. Brandon Nimmo, who will become a free agent after the World Series, is a lefty with a .281 average over the last three years. Signing Nimmo would make the Yankees more left-handed, add some speed, athleticism and base running and serve as solid Judge insurance should No. 99 leave.

If they come back to 2023 with an overwhelmingly right-handed lineup again, the Yankees become much easier to pitch to and game plan for. Re-signing Andrew Benintendi would help too, and so will more playing time for the switch-hitting Cabrera, but they can’t keep having 71% of their plate appearances come from the right side.

Patience was a pillar of the team’s offense, but at a certain point too much patience becomes harmful inactivity.

While their calculated reluctance led to the Yankees being the only team in Major League Baseball with a double-digit walk rate, it also put them near the top of the leaderboard in a strange category.

Only the Cleveland Guardians watched more pitches right down the middle than the Yankees. Even more curious, when Yankee hitters were ahead in the count, they took more pitches in the happy zone than any other team. The first statistic can be explained with more context, as some of those pitches came in 3-0 counts when they weren’t going to swing no matter what, and some of them came in 0-0 counts when they’re trying to avoid making a first-pitch out.

But passing on center-cut pitches in 2-0, 2-1, or 3-1 counts is very odd, especially when hitting coach Dillon Lawson bases his whole livelihood on the idea that his guys should hit strikes hard. When the hitters are ahead in the count, they should be looking for pitches right over the heart of the plate, not spitting on them. The Yankees also, unsurprisingly, did a lot of damage on those meatballs when they did swing, slugging .610 on middle-middle pitches. Their overall numbers would be even better, and the offense would be much more watchable, if they increased their swing percentage on those pitches rather than consistently putting themselves deeper into the count.