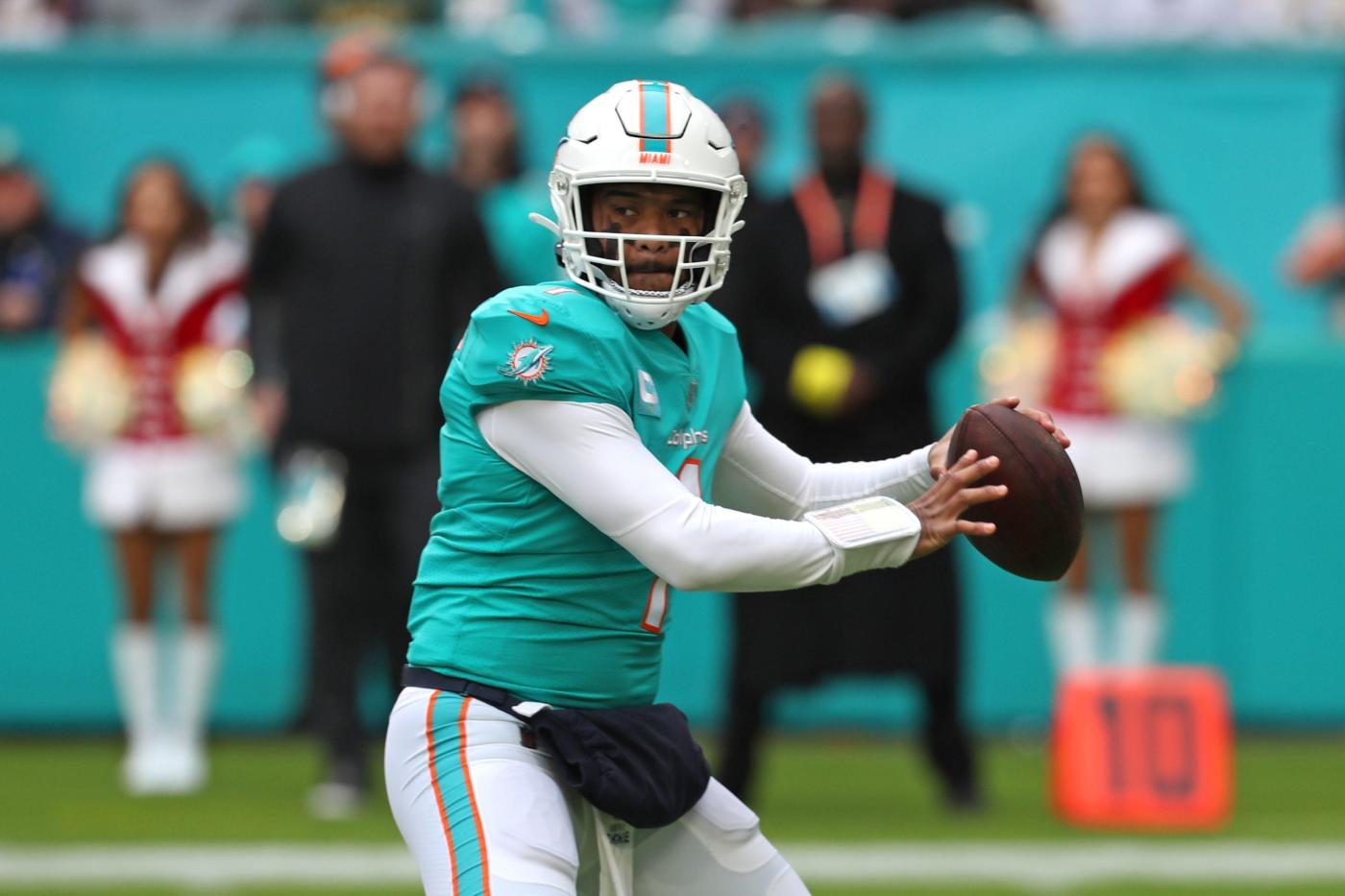 If you thought this year’s Miami Dolphins team was exempt from the franchise’s patented December collapse, think again.

Quarterback Tua Tagovailoa threw three fourth-quarter interceptions, and the Dolphins lost their Christmas Day game against the Green Bay Packers, 26-20, after leading, 20-10, deep in the first half on a chilly, 46-degree Sunday afternoon at Hard Rock Stadium.

The Dolphins (8-7) dropped a fourth straight game and finished December winless at 0-4. It’s their first winless December since 1993 when they started 9-2 and ended on a five-game losing streak to miss the playoffs.

Miami’s playoff odds, which have been held up by other teams’ losses despite the Dolphins’ own losing streak, decreased from 83 percent to 67 percent, according to FiveThirtyEight.

The Dolphins still control their own postseason destiny if they defeat the Patriots in New England and win a home finale against the Jets, but they’ll need help elsewhere if they split the last two. Miami is still able to clinch before Week 18 if it wins against the Patriots and the Jets lose in Seattle next Sunday.

“Human nature is what you have to fight,” Dolphins coach Mike McDaniel said as he will try to rally his players to not let this streak keep Miami out of the postseason, something that seemed like a foregone conclusion when the Dolphins finished November 8-3 and atop the AFC East. “It’s going to take a team that’s really tight and close to not allow anyone to press and really have these situations manifest anything but improvement.”

Said left tackle Terron Armstead: “The important thing is to continue to improve. You want to get hot going into the playoffs. We’re on a bit of a skid right now, but we have a chance to get this next one and keep our playoff hopes alive.”

Tagovailoa finished 16 of 25 for 310 yards, a touchdown and the three crucial interceptions.

“It was just terrible how everything ended,” Tagovailoa said. “Like I told the guys, ‘That’s on me.’ I will definitely get better from that.”

Excelling early in the game with big plays, his star receiving combination of Tyreek Hill and Jaylen Waddle both surpassed 100 yards. Waddle had five receptions for 143 yards and a touchdown, and Hill made four catches for 103 yards.

Packers quarterback Aaron Rodgers was 24 of 38 for 238 yards, a touchdown and an interception. He made several impressive throws onlookers have come to expect since he first became Green Bay’s starting quarterback in 2008 and sustained key drives in the second half.

With the score tied at 20 early in the fourth quarter, the Dolphins and Packers exchanged interceptions and it netted Green Bay a go-ahead field goal with 11:45 remaining.

Miami cornerback Kader Kohou came down with an interception of Rodgers for the first one of his career as he possibly got away with a shove of Packers receiver Allen Lazard on the pass to the end zone.

On the very next play, Tagovailoa threw high into traffic trying to get a pass to Hill. The errant throw was intercepted by Packers Pro Bowl cornerback Jaire Alexander. Following a questionable roughing-the-passer penalty called on Jaelan Phillips, Miami got a red-zone stop to keep the Packers to a 28-yard Mason Crosby field goal for the lead, 23-20.

Miami was driving with a chance to tie or take the lead at the Green Bay 30-yard line, but Tagovailoa threw a second fourth-quarter interception, picked off by linebacker De’Vondre Campbell as he targeted running back Raheem Mostert over the middle.

After the Packers consumed four minutes driving, Crosby nailed a 26-yard field goal to put Green Bay ahead, 26-20, with 2:02 to play.

Miami’s fate was sealed when Tagovailoa tossed it to the wrong team one final time as cornerback Rasul Douglas came down with the ball that Tagovailoa admitted postgame was just a bad throw.

Tagovailoa said the first interception was just a high pass to Hill as he tried to get it over an underneath defender, and there was a miscommunication between he and Mostert on the one to Campbell.

“The route was supposed to be different,” Mostert said. “That was definitely on my fault. That’s not Tua’s fault at all.”

Added Tagovailoa: “I might’ve said the wrong play. I’m not too sure, but there was just some communication error on that.”

Green Bay started the second half with a magnificent Rodgers-led drive that went 78 yards in 11 plays and took the first 7:07 off the third-quarter clock. Rodgers threw a sidearm 31-yard completion to tight end Marcedes Lewis that put the Packers in scoring position before A.J. Dillon scored on the ground from a yard out two plays later. Green Bay also converted a fourth-and-1 in its own territory early in the series.

The Dolphins squandered an opportunity to retake the lead later in the third quarter when kicker Jason Sanders missed a 48-yard attempt late in the third period, snapping his 12-kick streak of made field goals.

With two big plays in the passing game in the first half, Tagovailoa and the Dolphins scored one long touchdown and set up another 1-yard score.

Waddle broke free on the first play of Miami’s second drive, crossing over the middle to then sprint down the right sideline for an 84-yard touchdown that was assisted by fine downfield blocking by Hill. It marked Miami’s longest play of the season.

“They just called my number,” Waddle said. “Tua gave me a ball. You have to credit [Hill]. He had some good downfield blocking to really spring me.”

After Green Bay answered with a Rodgers touchdown to Lewis on fourth-and-goal at the 1, Tagovailoa threw deep over the middle about 57 air yards to Hill as the speedster ended up down at the Packers’ 1-yard line. Running back Jeff Wilson, after missing a game with a hip injury, did the rest with a short plunge into the end zone.

The Dolphins, after scoring a field goal on their opening drive, allowed a 93-yard kick return by the Packers’ Keisean Nixon set them up in a goal-to-go situation to start their first offensive series. An Elandon Roberts sack of Rodgers set Green Bay back before settling for the tying field goal.

A Raheem Mostert fumble late in the first half that was forced and recovered by Packers defensive lineman Jarran Reed allowed Green Bay to get the ball before the end of the half, with Crosby’s second field goal getting the Packers within one possession before halftime. It started a run of 16 unanswered points that led to the Packers victory.

The 46-degree kickoff temperature was the second-coldest for a game the Dolphins hosted in franchise history.

After playing on Christmas Day, the Dolphins now play the Patriots in New England on New Year’s Day, next Sunday, before a home finale against the Jets.