Todays Though > News > Top picks lead productive group, and more help could be on the way – Boston Herald
News

Top picks lead productive group, and more help could be on the way – Boston Herald 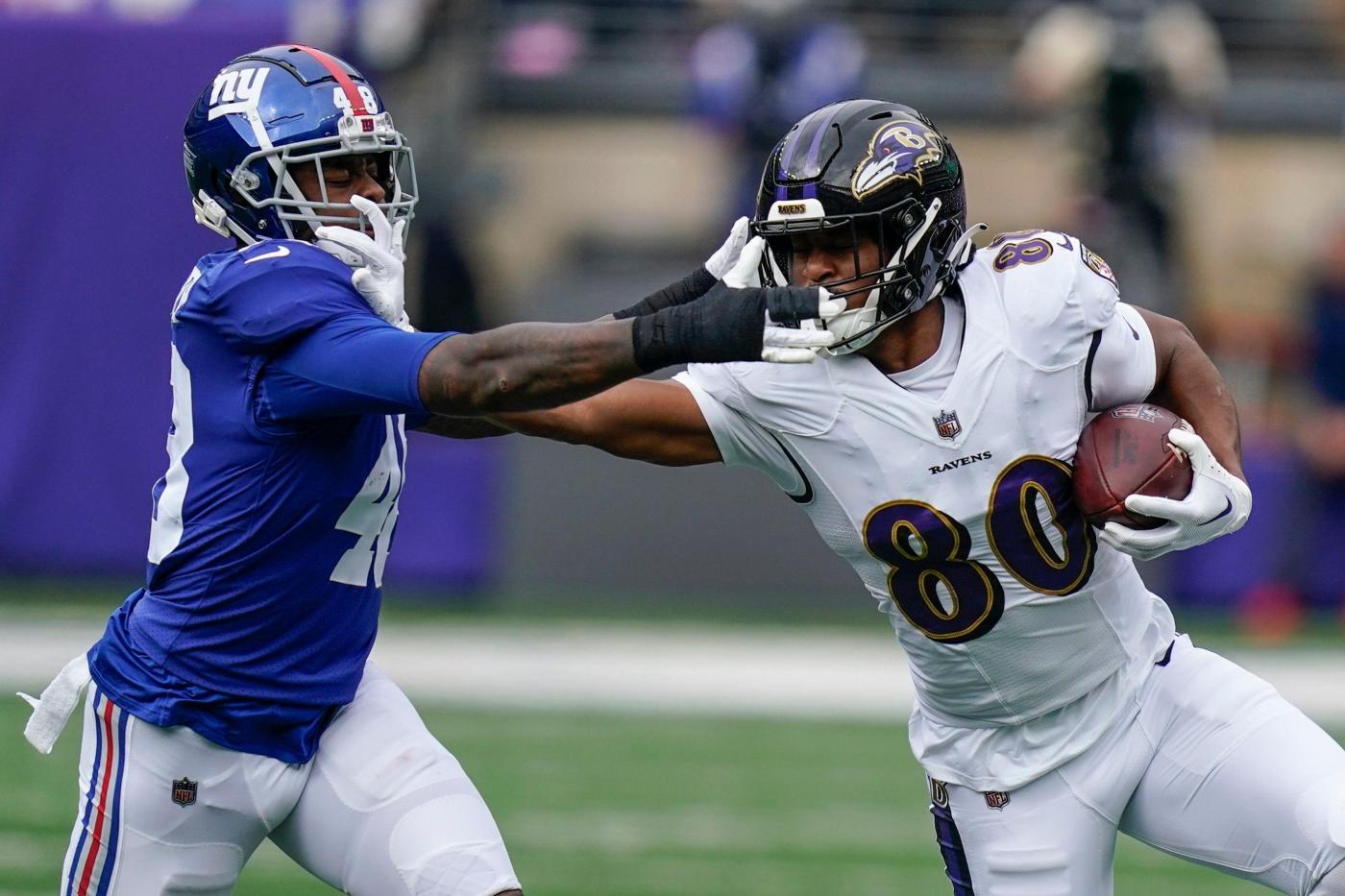 After the Ravens had made the last of their 11 picks in April’s NFL draft, coach John Harbaugh was asked whether he’d considered whether any were potential rookie starters.

“Really, I’d look at this whole board and tell you that they have potential to be a starter,” he said.

As the Ravens prepare for the second half of their season, even more rookie help could be on the way. Here’s a look at how their draft class is performing entering Week 10.

The No. 14 overall pick has graded out as Pro Football Focus’ No. 2 rookie safety and No. 6 overall safety this season. Because of the Ravens’ depth there, however, 73 players at the position have played more defensive snaps. Marcus Williams and Chuck Clark started the season as every-down players. Since replacing the injured Williams, Geno Stone has been one of PFF’s top safeties.

That’s left Hamilton looking for ways onto the field. Special teams snaps have come easily; only inside linebacker Kristian Welch has played more this season. On defense, though, the Notre Dame product’s diverse skill set — Ravens coaches didn’t expect him to be such an effective blitzer — has made him the defense’s most flexible piece, if not its most used.

Hamilton’s seen nearly equal playing time as a box safety (67 snaps), slot defender (78) and deep safety (86). He’s also lined up along the line of scrimmage, generating two quarterback pressures (one sack, one hit) in 13 pass-rush snaps. Hamilton has 25 tackles (one for loss) this season, and in coverage, he’s allowing a passer rating of just 73.7 when targeted, bouncing back from a forgettable early-season stretch.

“When you get some responsibility and do well with it, then you earn more responsibility,” Harbaugh said Tuesday, a day after Hamilton played 75% of the defensive snaps in a win over the New Orleans Saints, a season high. “He’s a rookie; he came out there and he had tough sledding the first couple games, but he didn’t get down on himself. The guys didn’t get down on him; they just kept pushing him. He was open to it, he was willing to listen to wise counsel, and it’s paid off for him.”

The No. 25 overall pick was the seventh offensive lineman taken in the first round, but perhaps no rookie’s been better. Linderbaum has been a cornerstone of the Ravens’ dynamic rushing attack, carving out running lanes with difficult “reach” blocks on zone concepts and eliminating second-level defenders as a puller on power schemes. The Iowa product ranks No. 3 among centers in ESPN’s run-block win rate.

Linderbaum, who missed time in training camp with a foot injury, is one of three Ravens who’ve played every offensive snap this season, along with quarterback Lamar Jackson and left guard Ben Powers. His smaller frame and lack of experience have hampered him at times in pass protection, where he’s lined up against some of the NFL’s best nose tackles. Linderbaum’s allowed two sacks and 13 pressures this season, according to PFF.

“He told me after Week 4 … ‘Hey, it’s only my fourth game. I’m going to keep getting better,’” Harbaugh recalled Linderbaum telling him after Week 7. “And I believed him, and it’s been true. He’s just that kind of guy; he’s all business, he’s all ball, he loves it, he works really hard at it. He’s been playing well. He’s already playing really well, so to say that he’s going to keep getting better is quite a statement, and that’s a good thing.”

The second-round pick tore his Achilles tendon at Michigan’s pro day in March and didn’t practice fully until last week. He’s expected to make his NFL debut after the bye, bringing even more speed to an explosive defensive front. Ojabo, considered a first-round talent until his injury, was one of the country’s most disruptive pass rushers last season (11 sacks, five forced fumbles) but struggled at times in run defense. He’ll likely be used situationally as a rookie.

“It looks like he’s really confident,” defensive coordinator Mike Macdonald, who coached Ojabo at Michigan last year, said after Ojabo was activated to the 53-man roster last week. “He’s playing fast out there, and he’s running around, he’s in great spirits. So I’m proud of the progress that he’s made to be able to get to this point so quickly. So we’ll see as the week comes and the weeks come and how his role evolves over that time.”

The third-round pick has featured prominently in games against more run-heavy teams. Jones played a season-high 38 defensive snaps in Week 6 against the New York Giants, finishing with his first (and so far only) sack of the season and helping limit running back Saquon Barkely to 83 yards on 22 carries.

The Connecticut product sat out the Ravens’ first two games while recovering from a preseason knee sprain, but he’s seen at least 15 defensive snaps and five special teams snaps in all seven of his appearances (three starts). With Michael Pierce (torn biceps) lost for the season, Jones has played primarily as an early-down run stuffer.

According to PFF, he has five “stops” this season, which are recorded when a defender limits an offensive player to 45% or less of the yards needed to move the chains on first down or 60% or less on second down, or when a defender prevents the player from converting on third or fourth down. Only two rookie interior linemen have more stops.

The fourth-round pick has appeared in every game except the Ravens’ season opener, owing largely to his special teams contributions. On offense, Faalele has played 129 snaps this season, almost all of them coming in Week 3, when he came on in relief of injured left tackle Patrick Mekari, and in a Week 4 start.

For a longtime right tackle, the Minnesota product fared well. He started slowly after coming on for Mekari against the New England Patriots, giving up two sacks in the first half. But Faalele stabilized in the second half, and against Buffalo a week later, he allowed just three pressures against a talented Bills line, according to PFF. The hulking, 6-foot-8 Faalele hasn’t graded out well as a run blocker, but he has tremendous power.

“Daniel has kind of established himself the last two games as a viable guy for us,” Harbaugh said after the loss to Buffalo. “As we get guys back, he’s still going to be in the mix. He played really well.”

The fourth-round pick missed time in the preseason with a head injury but returned to health by the Ravens’ season opener. He’s had a bumpy two months since then. Armour-Davis played three defensive snaps against the New York Jets in Week 1, 38 against the Miami Dolphins in Week 2 and nine against the Patriots in Week 3.

Lining up almost exclusively as an outside cornerback, the Alabama product gave up five catches on six targets for 69 yards and the late go-ahead touchdown against Miami, according to PFF. He was quickly benched after allowing two catches on two targets for 71 yards against New England. A healthy scratch for the next five games, Armour-Davis wasn’t activated until Monday’s win in New Orleans, when he earned 15 special teams snaps.

“He’s coming along pretty good” on special teams, coordinator Chris Horton said after Week 1. “Earlier in training camp, he missed some of the time, so it was just good to get him out there and let him get a feel for our phase of the game. I think as we move forward, and we continue to go along, and we continue to stack these weeks, he’s going to continue to play very well for us.”

The fourth-round pick missed most of training camp after undergoing sports hernia surgery and wasn’t activated to the Ravens’ 53-man roster until Tuesday. Tight ends coach George Godsey said Tuesday that Kolar is still working his way into “football shape,” having had only limited practice time. The 6-foot-6 Kolar lined up mostly in the slot at Iowa State, as Mark Andrews and Likely do in Baltimore, meaning snaps could be scarce this year.

“He’s a young player, and he missed a lot of time during training camp, so he’s still developing, but he’s out there,” Harbaugh said Tuesday. “He looks good. He’s so talented, he’s so big, he has great hands. He wants to do well; he’s very conscientious.”

The fourth-round pick is 11th in the NFL in punting average (48.8 yards) and 16th in net punting average (41.9 yards). Last year, Stout’s predecessor and now coach, Sam Koch, finished with averages of 44.4 yards and 40.0 yards, respectively. Stout’s also capably replaced Koch as the holder in the Ravens’ kicking battery.

According to PFF, the Penn State product is averaging the 12th-best hang time in the NFL (4.43 seconds per punt), and he’s put 11 of his 29 punts inside the 20-yard line, a middle-of-the-pack rate. After some early-season issues, Stout has booted balls more consistently in recent weeks, including a momentum-swinging 69-yard punt in a Week 7 win over the Cleveland Browns.

“Our focus with him is, right now, it’s just consistency and just finishing,” Horton said after Week 3. “He’s probably seeing a lot, and we’ll just try to get him under control, just take care of his business.”

The fourth-round pick was one of the NFL’s stars of the preseason. Now he’s one of the league’s best rookie tight ends. Among first-year players at the position, Likely ranks behind only the Tampa Bay Buccaneers’ Cade Otton in catches (17), targets (27) and receiving yards (205).

The Coastal Carolina product has lined up all over the field for the receiver-needy Ravens — in the slot and in the backfield, out wide and as a blocker next to the offensive line. Almost half of Likely’s receiving yards have come after the catch, a testament to his slippery open-field moves and feel for holes in zone coverage. Most encouraging, though, is his growth as a blocker: After a slow start, Likely earned elite run-blocking grades from PFF the past two games.

“He’s growing and he’s doing better each practice,” Godsey said Tuesday. “He’s getting a lot of reps. … He’s a fast learner, too. We expect that to keep growing and improving.”

The fourth-round pick has played the third-most snaps of any Ravens rookie this season, behind only Linderbaum and Hamilton. Williams has been on the field for over a third of the Ravens’ defensive snaps (213) and is 10th on the team in special teams snaps (91). In nine games, he has 21 tackles (one for loss) and two passes defended.

The Houston product has impressed coaches with his versatility — while he’s played almost exclusively in the slot, he’s lined up at safety and handled deep-zone coverages — but his struggles in coverage have been glaring at times. According to PFF, opposing quarterbacks have posted a 129.0 passer rating and thrown for three touchdowns when targeting Williams this season. He played just seven defensive snaps Monday against New Orleans, a sign that the Ravens could be relying more on Hamilton in the slot.

“Right now, we’re just looking for the best combination” in the secondary, Macdonald said after Week 6, “but it’s definitely an open competition.”

The sixth-round pick from Missouri was released at the end of a quiet training camp and preseason. He signed with the Ravens’ practice squad but hasn’t been elevated for a game this season.