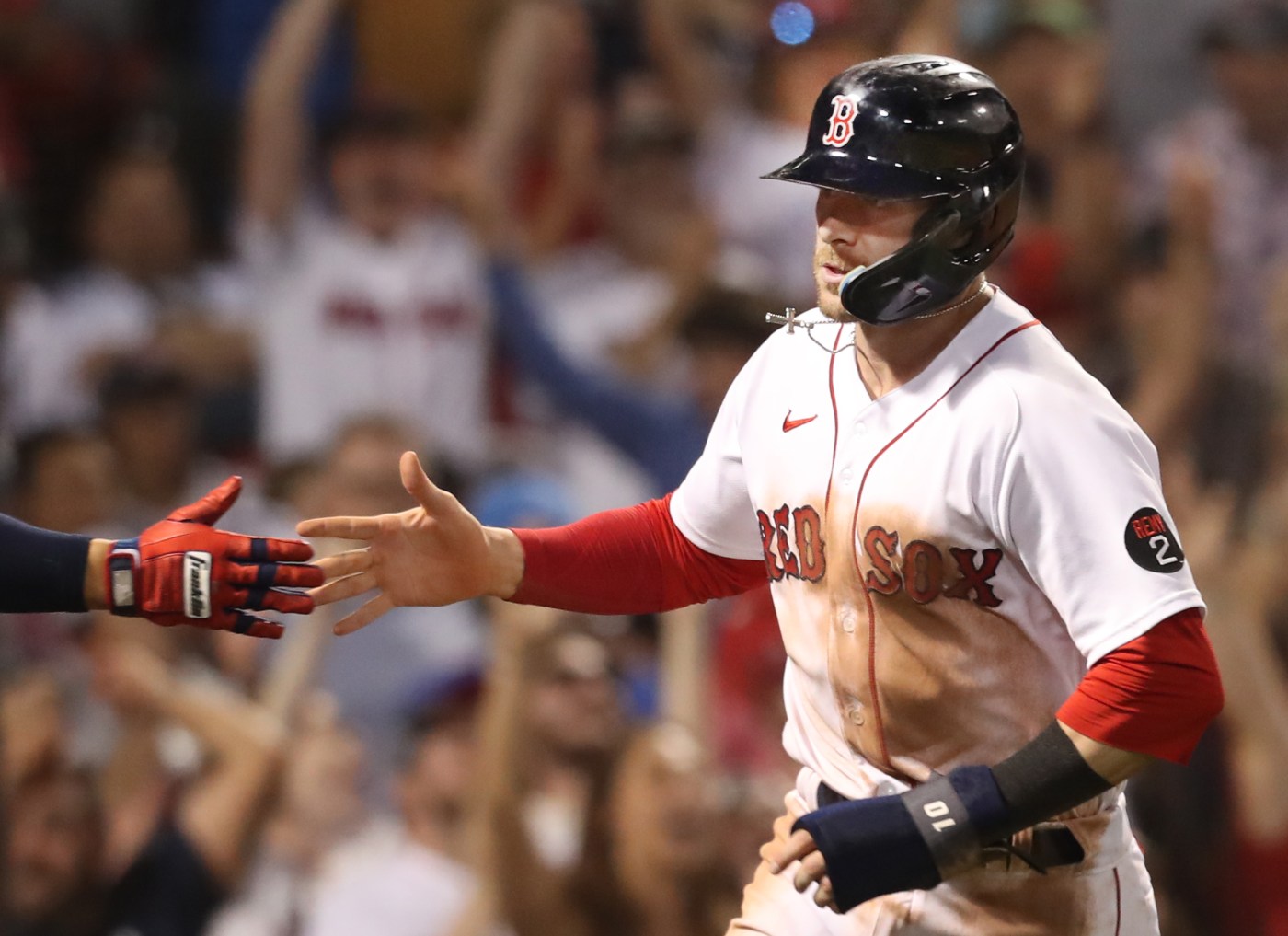 Trevor Story is still feeling discomfort in his right hand and is seeking a second opinion about it.

Red Sox manager Alex Cora said the second baseman was seeing a hand specialist on Friday. Story suffered a right hand contusion when he was hit by a pitch on July 12 in Tampa Bay and has now missed 13 games since. He started taking swings again last weekend but is not recovering the way he hoped.

“He didn’t feel today that he was progressing the right way,” Cora said. “We feel that there’s nothing structurally, but it’s just like to ease his mind. We’ll know more probably (Friday night) or tomorrow.”

Cora said Story is still feeling pain while hitting, with the discomfort coming on the impact of contact. But he doesn’t feel it while throwing the ball.

“I think everybody in the medical department feels like we’ll be in the same place tomorrow,” Cora said. “It’s about treatment and just keep getting better. We’ll know more tomorrow.”

Without Story — one of 12 Red Sox on the injured list — Boston has been forced to play a mix of Jeter Downs and Yolmer Sanchez at second base. His bat has certainly been missed — he still leads the team with 58 RBI — and his glove has been just as missed during a stretch in which the team has played ugly defense.

“He became the rock of the infield,” Cora said this week. “He’s been the guy since he started playing second, it’s been solid. We’ve been missing him. Regardless of the numbers offensively, average wise and all that stuff, he’s a presence. Everybody knows with one pitch he can go deep. … It’s just another at-bat that puts everybody into place and I know that we’re missing him.”

Hill expected back in Houston

The Red Sox are — finally — expecting some reinforcements when they travel to Houston for next week’s series with the Astros. Rich Hill, who pitched three innings with Double-A Portland on Thursday night, will be active at some point in that series, Cora said, and could start on Tuesday after missing nearly a month with a sprained left knee.

Cora also said that there’s a good chance Christian Arroyo, who’s been out for three weeks with a left groin strain, will be activated in the coming days. He’s made two rehab appearances with Portland this week.

Michael Wacha (shoulder) will pitch a three-inning simulated game at Fenway Park on Saturday. Rafael Devers, who is expected back this week, will be among the hitters facing him.

Garrett Whitlock recorded his second save of the week as he pitched the final two innings to lock up Thursday’s 4-2 win over the Guardians, but it wasn’t perfect. He allowed two hits, his first walk since May and gave up his first run since coming back from the injured list.

It’s not often Whitlock — who was sensational as a rookie out of the bullpen last season — has struggled in relief.

Whitlock has been as good as expected since rejoining the bullpen, and the Red Sox will continue to use him in multi-inning stints two or three times per week. Cora noted he’s not moving as well as he did early this season or last year since his hip injury, and part of the reason he went back to the ‘pen is to avoid the heavy workload as a starter. It’s clear that the bullpen – which needed his high-leverage arm – is the best place for him this year as a dominant multi-inning threat who can even go three innings if needed.

“I like this version. It helps everybody,” Cora said. “That’s the luxury of having him in the bullpen and Tanner (Houck). You can just map it out. At one point, if everything goes well, you get 12 innings during the week out of both of them if we go multiple innings three times with them. They’re weapons. They’re really good at what they do. We feel comfortable with this. There are certain days that we’ll pitch him one inning, but I think going multiple innings, it helps a lot of people here. …

“I think for the player, this is the best thing we can do and he’s handling it great.”

Hunter Renfroe — who was a Red Sox lineup fixture last year as their everyday right fielder — is back in Boston this weekend with the Milwaukee Brewers. He was traded minutes before the MLB lockout last December as the Red Sox brought back Jackie Bradley Jr. and a pair of prospects.

Renfroe, who hit 31 homers for the Red Sox in his lone season in Boston, had 17 for the first-place Brewers as the weekend began. He batted fourth in his return and was greeted with a nice hand from the Fenway crowd upon coming up for his first at-bat.

“He was good for us. He was really good,” Cora said. “I think in the clubhouse, everybody respected him. … He was amazing for us. I haven’t been able to talk to him. Obviously when the trade happened, that was it, and looking forward to catching up with him.”