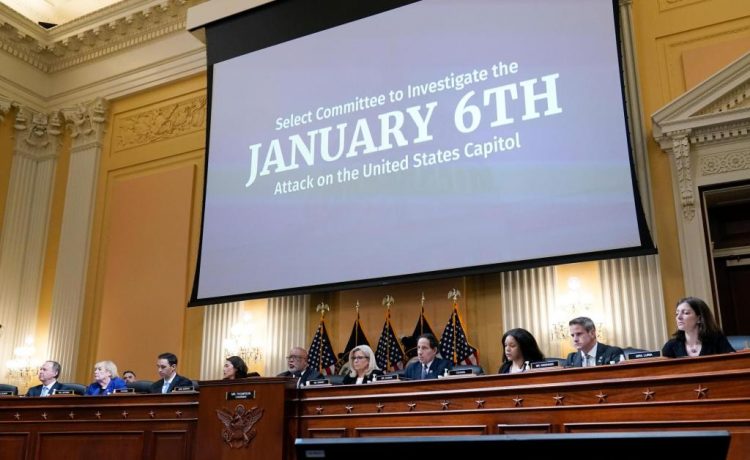 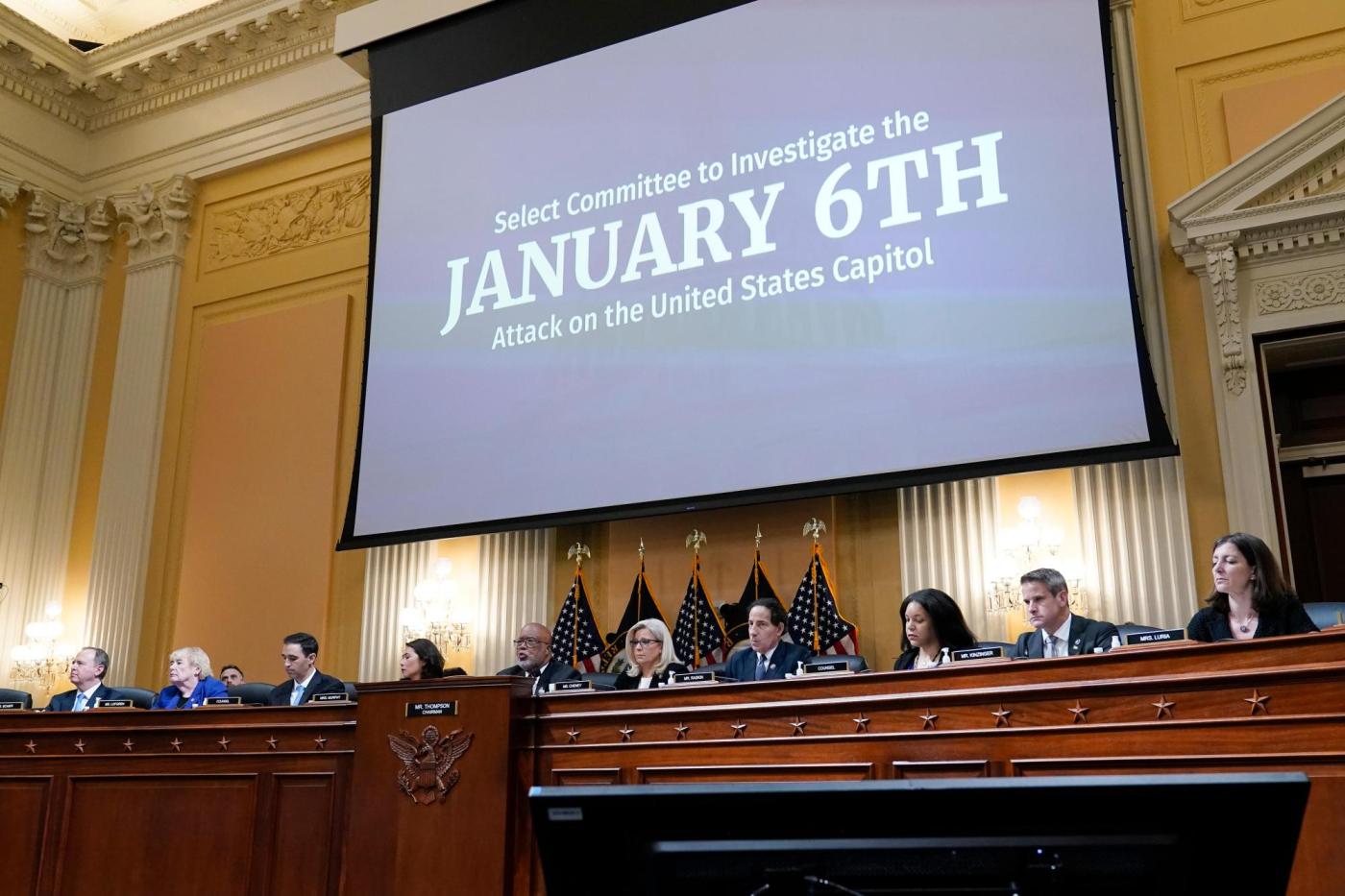 WASHINGTON (AP) — With the Capitol siege raging, President Donald Trump poured “gasoline on the fire” by tweeting condemnation of Mike Pence’s refusal to go along with his plan to stop the certification of Joe Biden’s victory, former aides told the Jan. 6 investigating committee in a prime-time hearing Thursday night.

Earlier, an irate Trump demanded to be taken to the Capitol after his supporters had stormed the building, well aware of the deadly attack, but then returned to the White House and did nothing to call off the violence, despite appeals from family and close adviser,, witnesses testified.

At the Capitol, the mob was chanting “Hang Mike Pence,” testified Matt Pottinger, a deputy national security adviser for Trump, as Trump tweeted his condemnation of his vice president.

Pottinger said that when he saw Trump’s tweet he immediately decided to resign, as did former White House aide Sarah Matthews, who described herself as a lifelong Republican but could not go along with what was going on. She was the witness who called the tweet “pouring gasoline on the fire.”

The hearing aimed to show a “minute by minute” accounting of Trump’s actions that day and how rather than stop the violence, he watched it all unfold on television at the White House.

An irate Trump demanded to be taken to the Capitol after the supporters he sent laid siege, well aware of the deadly attack and that some in the mob were armed but refusing to call it off as they fought to reverse his election defeat, witnesses told the Jan. 6 investigating committee Thursday night.

Trump had dispatched the crowd to Capitol Hill in heated rally remarks at the Ellipse behind the White House, and “within 15 minutes of leaving the stage, President Trump knew that the Capitol was besieged and under attack,” said committee member Elaine Luria, D-Va.

She said the panel had received testimony the confirming the powerful previous account of former White House aide Cassidy Hutchinson of an altercation involving Trump as he insisted the Secret Service drive him to the Capitol.

Among the witnesses testifying Thursday in a recorded video was retired District of Columbia Metropolitan Police Department Sgt. Mark Robinson who told the committee that Trump was well aware of the number of weapons in the crowd of his supporters but wanted to go regardless.

“The only description that I received was that the president was upset, and that he was adamant about going to the Capitol and that there was a heated discussion about that,” Robinson said. The panel heard Trump was “irate.”

Chairman Bennie Thompson opened Thursday’s prime-time hearing of the Jan. 6 committee saying Trump as president did “everything in his power to overturn the election” he lost to Joe Biden, including before and during the deadly Capitol attack.

“He lied, he bullied, he betrayed his oath,” charged Thompson, D-Miss.

After months of work and weeks of hearings, committee co-chair Liz Cheney of Wyoming said “the dam has begun to break” on revealing what happened that day, at the White House as well as in the violence at the Capitol.

This was probably the last hearing of the summer, but the panel said they will resume in September as more witnesses and information emerges.

“Our investigation goes forward,” said Thompson testifying remotely as he isolates after testing positive for COVID-19. “There needs to be accountability.”

Plunging into its second prime-time hearing on the Capitol attack, the committee vowed close scrutiny of Trump’s actions during the deadly riot, which the panel says he did nothing to stop but instead “gleefully” watched on television at the White House.

The hearing room was packed, including with several police officers who fought off the mob that day. The panel is diving into the 187 minutes that Trump failed to act on Jan. 6, 2021, despite pleas from aides, allies and even his family. The panel is arguing that the defeated president’s lies about a stolen election and attempts to overturn Joe Biden’s election victory fueled the attack and have left the United States facing enduring questions about the resiliency of its democracy.

“A profound moment of reckoning for America,” said Rep. Jamie Raskin, D-Md., a member of the committee.

With live testimony from two former White House aides, and excerpts from the committee’s more than 1,000 interviews, the Thursday night session will add a closing chapter to the past six weeks of hearings that at times have captivated the nation and provided a record for history.

Ahead of the hearing, the committee released a video of four former White House aides — press secretary Kayleigh McEnany, security aide Gen. Keith Kellogg, White House Counsel Pat Cipollone and executive assistant to the president Molly Michael — testifying that Trump was in the private dining room with the TV on as the violence unfolded.

“Everyone was watching television,” Kellogg said.

Returning to prime time for the first time since the series of hearings began, the panel intends to explain just how close the United States came to what one retired federal judge testifying this summer called a constitutional crisis.

The events of Jan. 6 will be outlined “minute by minute,” said the panel’s vice chair, Rep. Liz Cheney, R-Wyo.

“You will hear that Donald Trump never picked up the phone that day to order his administration to help,” Cheney said.

“He did not call the military. His Secretary of Defense received no order. He did not call his Attorney General. He did not talk to the Department of Homeland Security,” Cheney said. “Mike Pence did all of those things; Donald Trump did not.”

The hearing will show never-before-seen outtakes of a Jan. 7 video that White House aides pleaded for Trump to make as a message of national healing for the country. The footage will show how Trump struggled to condemn the mob of his supporters who violently breached the Capitol, according to a person familiar with the matter and granted anonymity to discuss it ahead of its public release.

Former White House aide Cassidy Hutchinson has testified that Trump wanted to include language about pardoning the rioters in the speech, but White House lawyers advised against it. Trump reluctantly condemned the riot in a three-minute speech that night.

Testifying Thursday are former White House aides. Matt Pottinger, who was deputy national security adviser, and Sarah Matthews, then press aide, both submitted their resignations on Jan. 6, 2021, after what they saw that day. Trump has dismissed the hearings on social media and regarded much of the testimony as fake.

Rep. Bennie Thompson, D-Miss., the chairman of the committee, is isolating after testing positive for COVID-19 and will attend by video. Rep. Elaine Luria, D-Va., a former Naval officer who will lead the session with Rep. Adam Kinzinger, R-Ill., who flew combat missions in Iraq and Afghanistan, said she expects the testimony from the White House aides will “just be really compelling.”

“These are people who believed in the work they were doing, but didn’t believe in the stolen election,” Luria said.

The White House aides were not alone in calling it quits that day. The panel is expected to provide a tally of the Trump administration aides and even Cabinet members who resigned after Trump failed to call off the attack. Some Cabinet members were so alarmed they discussed invoking the 25th Amendment to remove Trump from office.

As the panel continues to collect evidence and prepares to issue a preliminary report of findings, it has amassed the most substantial public record to date of what led up to Americans attacking the seat of democracy.

While the committee cannot make criminal charges, the Justice Department is monitoring its work.

So far, more than 840 people have been charged with federal crimes related to the Capitol riot. Over 330 of them have pleaded guilty, mostly to misdemeanors. Of the more than 200 defendants to be sentenced, approximately 100 received terms of imprisonment.

What remains uncertain is whether Trump or the former president’s top allies will face serious charges. No former president has ever been federally prosecuted by the Justice Department.

Attorney General Merrick Garland said Wednesday that Jan. 6 is “the most wide-ranging investigation and the most important investigation that the Justice Department has ever entered into.”

“We have to get this right,” Garland said. “For people who are concerned, as I think every American should be, we have to do two things: We have to hold accountable every person who is criminally responsible for trying to overturn a legitimate election, and we must do it in a way filled with integrity and professionalism.”

In delving into the timeline, the panel aims to show what happened between the time Trump left the stage at his “Stop the Steal” rally shortly after 1:10 p.m., after telling supporters to march to the Capitol, and some three hours later, when he issued a video address from the Rose Garden in which he told the rioters to “go home” but also praised them as “very special.”

It also expects to produce additional evidence about Trump’s confrontation with Secret Service agents who refused to drive him to the Capitol — a witness account that the security detail has disputed.

Five people died that day as Trump supporters battled the police in gory hand-to-hand combat to storm the Capitol. One officer has testified about how she was “slipping in other people’s blood” as they tried to hold back the mob. One Trump supporter was shot and killed by police.

“The president didn’t do very much but gleefully watch television during this time frame,” Kinzinger said.

Not only did Trump refuse to tell the mob to leave the Capitol, he did not call other parts of the government for backup and gave no order to deploy the National Guard, Cheney said.

This despite countless pleas from Trump’s aides and allies, including his daughter Ivanka Trump and Fox News host Sean Hannity, according to previous testimony and text messages the committee has obtained.

“You will hear that leaders on Capitol Hill begged the president for help,” Cheney has said, including House Republican leader Kevin McCarthy, who she said indicated he was “’scared’ and called multiple members of President Trump’s family after he could not persuade the President himself.”

The panel has said its investigation is ongoing and other hearings are possible. It expects to compile a preliminary report this fall, and a final report by the end of this session of Congress.

Follow AP’s coverage of the Jan. 6 committee hearings at https://apnews.com/hub/capitol-siege.