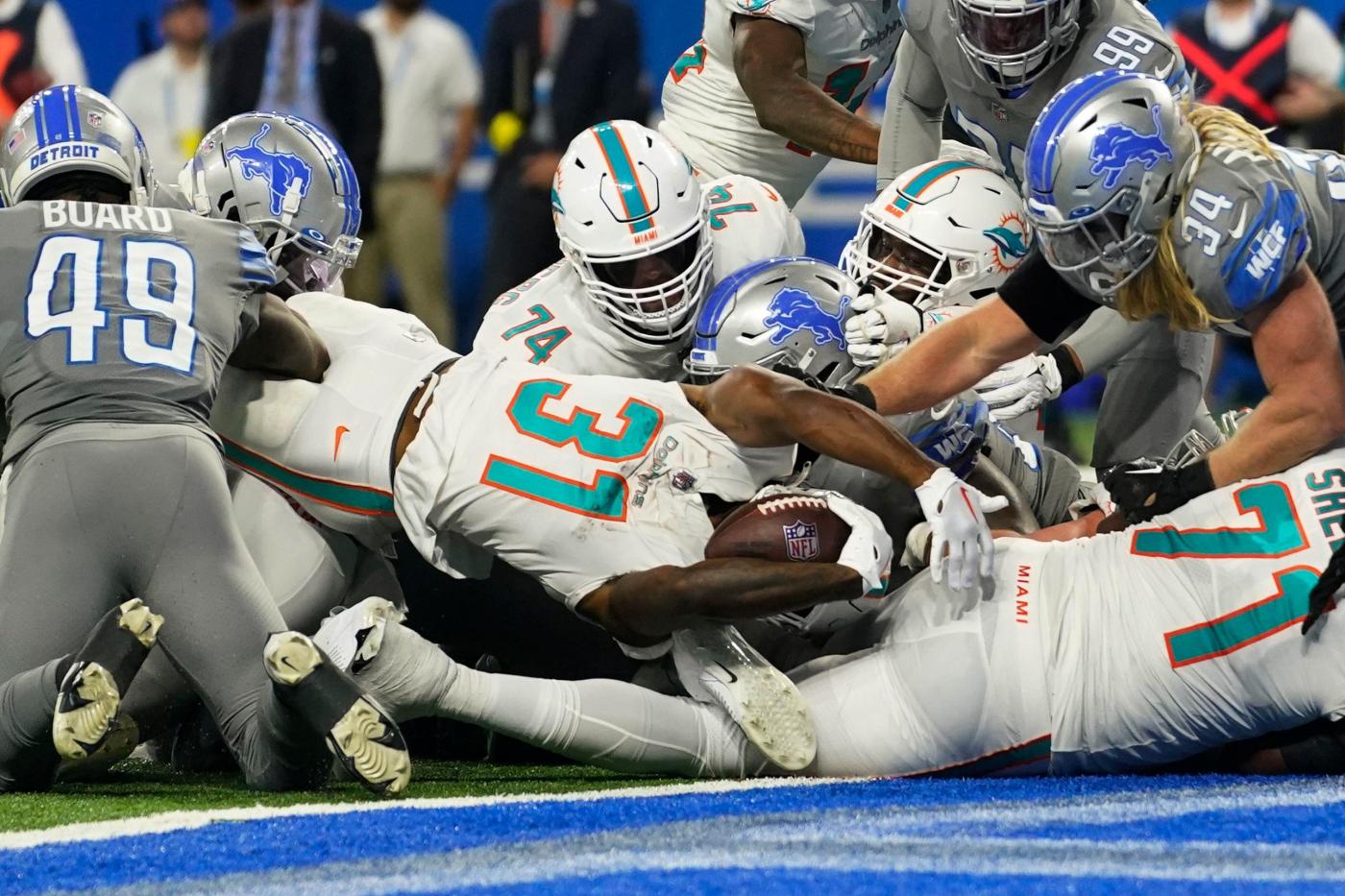 That was a fun game – if you like offense, at least in the first half. The key to Sunday was the Dolphins offense kept scoring and the Dolphins defense founds its footing in the second half of a 31-27 win against Detroit.

1. Co-players of the day: Tua Tagovailoa, Tyreek Hill or Jaylen Waddle. Take your pick as they feasted on a Detroit defense that lived down to its worst-in-the-league rating. The Dolphins big-play passing game was back for the first time since the second game against Baltimore. Tua played a stellar game, completing 28 of 35 passes for 374 yards and two touchdowns. Hill caught 11 passes for 180 yards. Waddle caught eight passes for 106 yards. This trio wasn’t stopped Sunday.

2. Stat of the game I: Detroit had no points in the second half. This, after Detroit was the first NFL team this year to score on its first five possessions. Was it adjustments? Was it regression to the mean? Either way, the Dolphins kept scoring and Detroit didn’t this game. Detroit ended its touchdown drought in scoring a TD on its first possession Sunday. And its second. And third. Underscoring that start, it hadn’t scored a touchdown in the previous two games.Goff completed nine of his first 11 passes for 191 yards on those opening drives. That’s a 21.2-yard average. When the Lions came out in the second half and had a penalty-infested drive that resulted in a punt, fans booed. But that was the story of the second half as the Dolphins defense found its footing.

3. Play of the game: Fourth-and-1 at the 35 with three minutes left. Detroit didn’t just go for it. Goff went for the home run. He threw in the end zone to receiver Josh Reynolds. Incomplete. Good coverage by Dolphins rookie Kader Kohou. Goff couldn’t find another receiver open evidently, and threw a bad ball. In a game of offense, this was a play by the Dolphins defene.

4. Stat of the Game II: On third down, Tua was eight-for-nine for 131 yards and two touchdowns. There’s the package the Dolphins expected when they drafted him. The decisions. The accuracy. The production.

5. Detroit, for all its failures, has a good offensive line so this was a good measure of just where the Dolphins defensive front is. Well, Detroit running back Jamaal Williams ran 7 yards up the middle untouched for the game-opening first down. That set the stage for the first half. In the second half, they got some pressure on Goff with Zach Sieler recording a sack and held their own – just as the Dolphins defense held its own in the second half.

6. Stat of the Day III: Tyreek Hill had his fifth game of over 160 yards receiving to move into second on the Dolphins all-time list (via @HardRockSB). What’s telling is he’s done it in eight games. Mark Duper is the franchise leader with eight games over 160 yards. Duper played 69 games.

7. Can the Dolphins get through a game without a special-teams discussion? Facing fourth-and-2 at its 33 with 1:49 left in the half, Dan Campbell decided it didn’t matter if he gave the Dolphins the ball at his 33 or the Dolphins’ 33. His last-ranked defense couldn’t stop them. So he called a fake and a direct snap to C.J. Moore resulted in a 13-yard run and first down. It was yet another breakdown for the Dolphins special teams. This resulted the ball being kept from the Dolphins and the Lions kicking a 26-yard field goal with no time in the half to make it 27-17.

8. Safety Eric Rowe was a healthy scratch Sunday and CBS reported McDaniel said the decision came down to others playing special teams. That meant Clayton Fejedelem or Vernon McKinley, who was just called up from the practice squad and activated. Rowe had played the previous five games at safety after being out with injury the first two games. As far as the special teams idea, that might just be a nice way to say Rowe wasn’t playing well and they wanted to see McKinley. If true, however, neither team punted in the first half and most kickoffs went into the end zone. Special teams only came into play when Detroit ran the fake punt. What the Dolphins did need, however, was a some help in the pass defense. Could Rowe have helped there? He was surprised at being scratched. “I”m just as shocked too …” he tweeted before the game.

* Tua slid to end a couple of runs. That was good to see.

* It’s become an unfortunate part of Dolphins games this year to see players huddle around an injured player who goes off on a cart. It was guard Liam Eichenberg on Sunday.

* Tuesday is the trade deadline and Mike Gesicki showed again Sunday he’s worth more playing this year than some fourth- or fifth-round pick somewhere else. Gesicki did, however, retire the giddy because he didn’t go to it after his third-quarter TD.

* The Patriots showed that the Jets aren’t all that.

10. Next week: Dolphins at Chicago Bears. Chicago played Dallas on Sunday. It’s changed the way it’s using quarterback Justin Fields in a win at New England last Sunday by implementing designed runs. That appeared to unlock some of Chicago’s offense. It also might have just surprised New England. If Chicago can find an offense, it changes the season. The Bears defense rank tied for sixth entering Sunday in allowing 18.9 points a game.