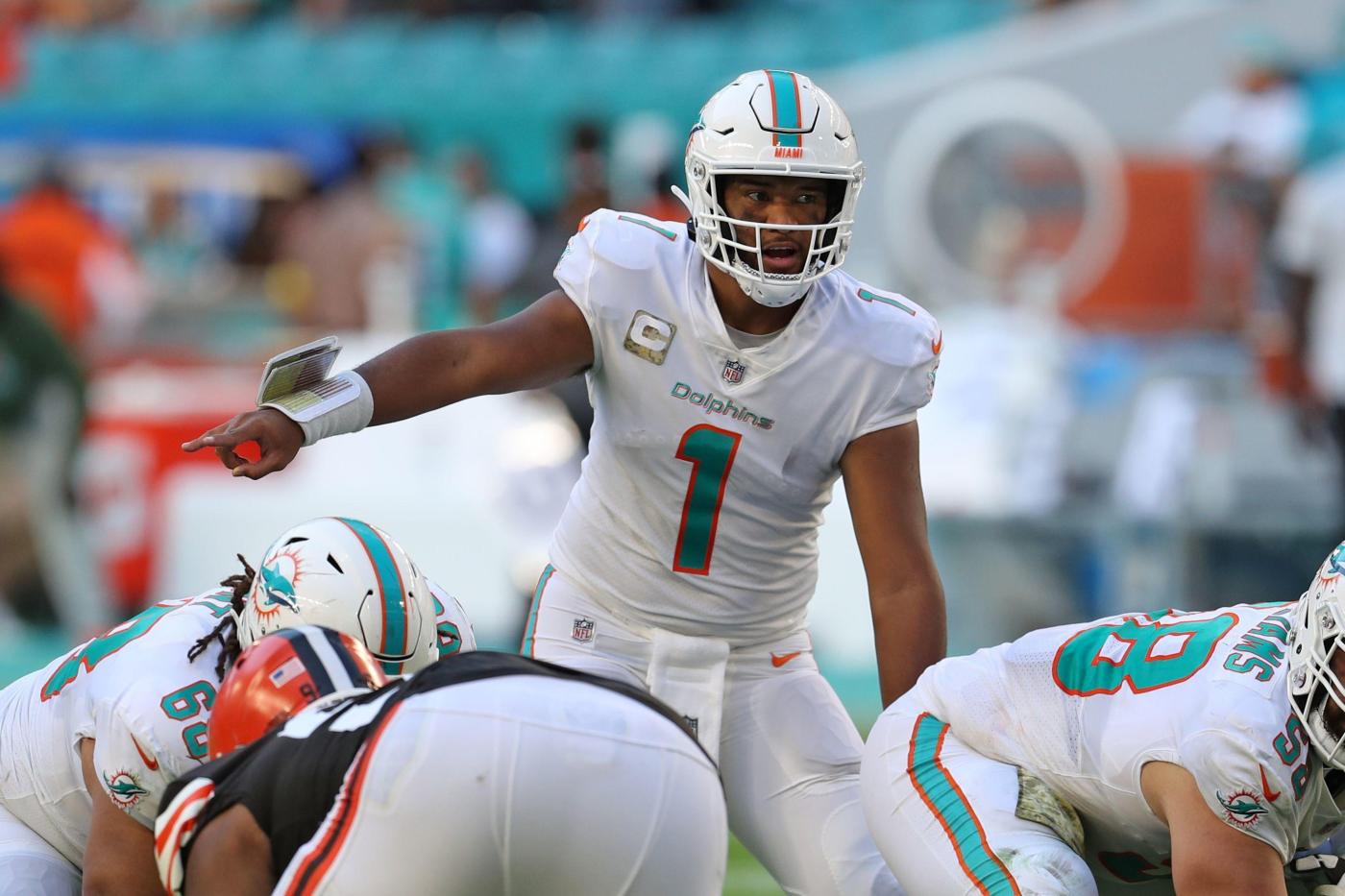 There’s no precedent for this. Not for Tua Tagovailoa leading most NFL heavyweight quarterback statistics after two seasons where he couldn’t beat out a journeyman quarterback.

Not for chants of “M-V-P” cascading down on him from a Hard Rock Stadium crowd on Sunday after two years of his franchise trying mightily to replace him.

Not for 143 passes without an interception after his previous coach cursed him at halftime in Tennessee for poor decision-making.

“Any more questions?” Tagovailoa said at the end of another big Sunday for him in the Dolphins 39-17 win against Cleveland when the media offerings ran out. “You guys don’t have any questions?”

No, he’s answered plenty this season, including most of mine raised the previous two years. I’m out of questions. I’ve seen the light after these back-to-back-to-back performances against Detroit, Chicago and Cleveland where Tagovailoa threw nine touchdowns against no interceptions and a Dolphins offense went over 30 points in three consecutive games for the first time since 2009.

“I don’t think there’s been a close interception or turnover in there,” Dolphins coach Mike McDaniel said. “You’re talking about being aggressive, have an aggressive style of football play as an offense and you can call pass plays and know you’re not going to give [the] defense it back.”

How hard is it to go game after game with no turnover? Look at Buffalo star quarterback Josh Allen on Sunday He fumbled a ball at his end zone to let Minnesota take a late lead, then threw an interception in the end zone to lose in overtime.

Still, Tagovailoa completed 25-of-32 passes Sunday for 285 yards and three touchdowns. That’s three consecutive games of three touchdown passes after doing that just once in 23 games over his first two years. Do you see the change?

He put it down to schematic changes that McDaniel brought and, “really just the guys that I’m surrounded with. I’m not able to make the plays that I’m able to do if we don’t have the guys up front blocking and the running backs with the run game.”

There’s no dismissing the Dolphins running for 195 yards on 33 carries on Sunday to show there’s an another layer to this offense emerging. This offensive line, maligned for years, is taking form as when Tagovailoa took off his jersey after Sunday’s game a team official commented how clean it still was.

He wasn’t sacked Sunday. He’s been sacked just twice in the previous four games (both against Detroit). That helps explain the way he spun the game on his finger, and the Dolphins didn’t punt for the first time since 2003.

“It’s phenomenal to watch him commit to the process,’’ McDaniel said. “It’s the third game in a row I didn’t feel a high or a low from him. He just tried to execute each and every play.”

Cleveland’s defense set up to stop Tyreek Hill and Jaylen Waddle. It was as effective as any defense, too, as Hill had five catches for 44 yards and Waddle had four for 66 yards. That’s not much by their standards. So Tagovailoa found others. Trent Sherfield, Alec Ingold and Raheem Mostert each had four catches.

“He is really seeing the field well,” McDaniel said. “I think sometimes how fast he is playing and how fast he is processing, you cut the tape on it, it looks like he might be throwing to No. 1 or 2 [options], but he is progressing through eligible one through five in his progression with lightning speed.

“That’s really making it frustrating for a defensive front. You’re in pass rush mode and you can’t get to them; that can wear on you. So he is doing a lot of things visually, manipulating defenders, making really good throws and getting the ball out.”

For two years, the Dolphins coaches, front office and owner tried to replace Tagovailoa with Deshaun Watson and Tom Brady. For two years, media like me wondered if he was “The Man”. Now he’s showing what he can do with a coach with a good scheme who believes in him and a good cast around him.

He leads NFL passers in everything from passer rating to yards per attempt. He has the Dolphins sitting in first place in the AFC East. He heard those M-V-P chants and waved to the crowd.

“Any more questions?” as he said to reporters Sunday.