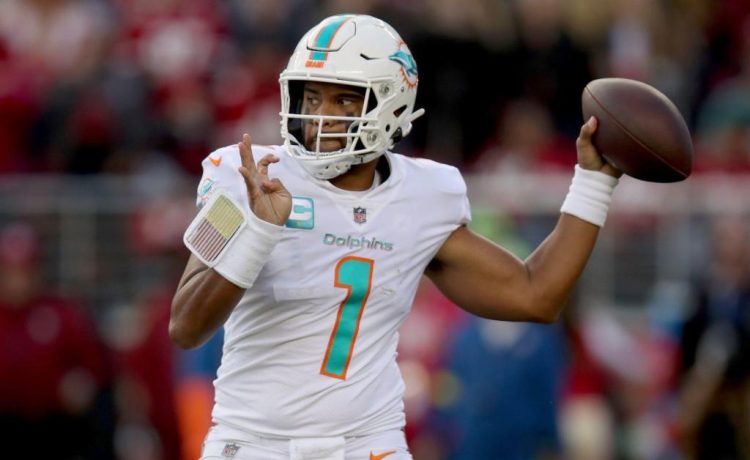 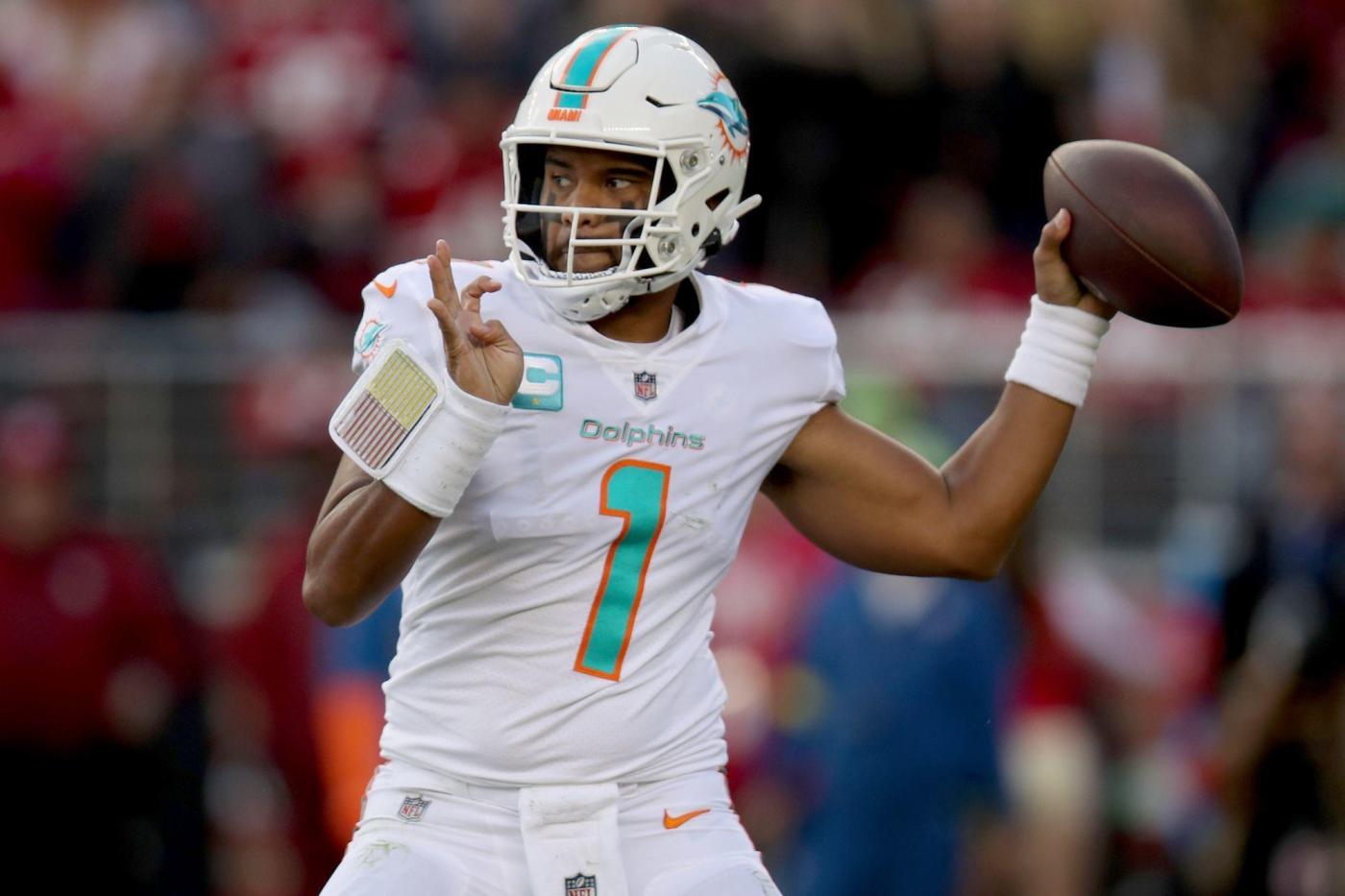 It was a night of frustration in prime time for the Miami Dolphins.

Chargers quarterback Justin Herbert, amid all the constant comparisons with the Dolphins quarterback taken one pick ahead of him in 2020, played like he was in a different weight class than Tua Tagovailoa.

Behind Herbert’s stellar play and Tagovailoa’s ineffectiveness against a defense that was missing five starters, the Chargers won, 23-17, dominating in virtually every statistical category while the Dolphins still managed to keep the score close on Sunday night at SoFi Stadium.

“Football is a humbling game,” coach Mike McDaniel said. “These are the things that you have to learn as a team. Unfortunately, we had to learn it the hard way.”

Miami (8-5) loses back-to-back games on the West Coast after also falling to the San Francisco 49ers last week. The Dolphins remain in the No. 6 slot in the AFC, but their lead in the standings for a wild-card spot is down to one game over the Chargers and New York Jets, both which now own a tiebreaker over Miami.

Los Angeles (7-6) has gotten back into the playoff picture at No. 7 with the win and Jets’ loss earlier Sunday to the Buffalo Bills. The Dolphins now trail the Bills by two games in the AFC East with a game in Buffalo to come on Saturday night.

Herbert made all the throws, whether it was a deep ball to big target Mike Williams across his body to the opposite side of the field, a perfectly placed pass to the back of the end zone or any of a number of smart checkdowns to running back Austin Ekeler. He threw for 367 yards and a touchdown on 39-of-51 passing, methodically picking apart the Dolphins defense, even as it didn’t result in many points.

Tagovailoa, never in a rhythm, was a pedestrian 10 of 28 for 145 yards and a deep touchdown to Tyreek Hill. Los Angeles, despite missing safety Derwin James, cornerbacks J.C. Jackson and Bryce Callahan and edge rusher Joey Bosa, decided it would stay true to its identity and play man coverage against the Dolphins’ standout receiving tandem of Hill and Jaylen Waddle, and it worked.

“For us to go out there as an offense and kind of show us what we showed, that’s not to our standard,” said Tagovailoa after struggling for a second straight game. “That’s not how we play football here, and that was very disappointing.”

Williams, who had only played six offensive snaps since Week 7, had six receptions for 116 yards and a touchdown. Keenan Allen went for 12 catches and 92 yards. Ekeler had 59 yards receiving, plus 45 on the ground and a rushing score.

While Hill accounted for 81 receiving yards and two total touchdowns, Waddle was limited to two catches for 31 yards and was targeted just four times.

“I was just kind of disappointed in the connection between [Tagovailoa] and some of the eligible [receivers],” said McDaniel, while adding there were also opportunities his quarterback missed and other instances where the protection failed.

Dolphins pass catchers themselves shouldered some of the blame.

“Tua played well enough for us to win this game, and for myself, I just got to make plays for him,” said Hill, who on one early opportunity was streaking across the field on a deep route where it appeared he couldn’t find the ball. “I felt like I had a lot of drops out there that’s not going to be counted and go against him, so I got to make plays for my boy.”

“Got to give credit to the Chargers and their defense and how they played us,” Waddle said. “We got to go out there, make plays for [Tagovailoa].”

Trailing 23-14, Dolphins kicker Jason Sanders made it a one-possession game with a 55-yard field goal with 1:10 remaining, but Miami could not recover the ensuing onside kick to stay alive.

The Chargers built a 10-point lead before halftime thanks to a questionable defensive play call on third-and-goal from the 17-yard line. The Dolphins put eight defenders at or near the goal line in a prevent look, which allowed a screen pass to Ekeler to gain 16. He ran it in from a yard out on the next play.

Miami got back to within 3 when Hill burned Chargers cornerback Michael Davis, who fell in coverage, for a 60-yard touchdown.

A pair of later field-goal drives and a series of defensive stops secured the two-possession advantage for Los Angeles in the second half that ultimately stood.

As so much was going wrong for the Dolphins in the first half, Hill, on the night he broke the franchise record for receiving yards in a season, electrified with a touchdown that didn’t come through the air.

The speedster recovered a fumble by teammate and running back Jeff Wilson Jr. and, with most of the 22 players on the field focused on a pile that had developed, Hill was able to scamper around the crowd and blaze 57 yards into the end zone. The fumbled ball was flipped to Hill from left tackle Terron Armstead in a pile.

“Once he dove in, he kind of popped the ball right to me, and then I was able to make a play,” Hill said. “It looked like he kind of [saw] me. He kind of rolled it to me.”

The Chargers, after forcing a quick three-and-out to kick off Sunday’s action, came up empty on their opening drive that consumed 8:36 when cornerback Kader Kohou came up with a big stop in the flat two yards shy of the goal line on a fourth-down play. It set the tone for the night, though, that the Chargers would dominate time of possession.

Los Angeles, driving into Miami territory again on its second series, settled for a field goal early in the second quarter after a first-quarter sack from Christian Wilkins put the Chargers into third-and-long.

Hill’s offensive fumble return touchdown came after three frustrating drives where Miami could only muster 5 yards. Meanwhile, Los Angeles had its original 10-0 advantage with an impressive Herbert throw to Williams in the back of the end zone for a 10-yard touchdown. The Dolphins were outgained, 249-55, in the first half.

Hill broke the Dolphins’ single-season receiving yards record with his first catch Sunday, a 13-yard reception in the first quarter. He needed 11 yards against the Chargers to pass Mark Clayton and his 1,389-yard mark established in 1984.

Wilkins, Jerome Baker, Jaelan Phillips and Eric Rowe each had a sack. Phillips had another one that was called off due to a roughing-the-passer call that was questionable, to say the least.

“[The official] just mentioned the whole rule about the body weight,” Phillips said. “He called it. That’s the way it stands. Nothing we can do about it.”

Wilson left Sunday’s game with a hip injury in the first half and didn’t return. Hill was announced as having an ankle ailment but quickly returned to action. Rowe sustained a hamstring injury.

The Dolphins have a quick turnaround from travel back to South Florida that will get them home early Monday morning. They play against the division-leading Bills (10-3) in Buffalo on Saturday night.