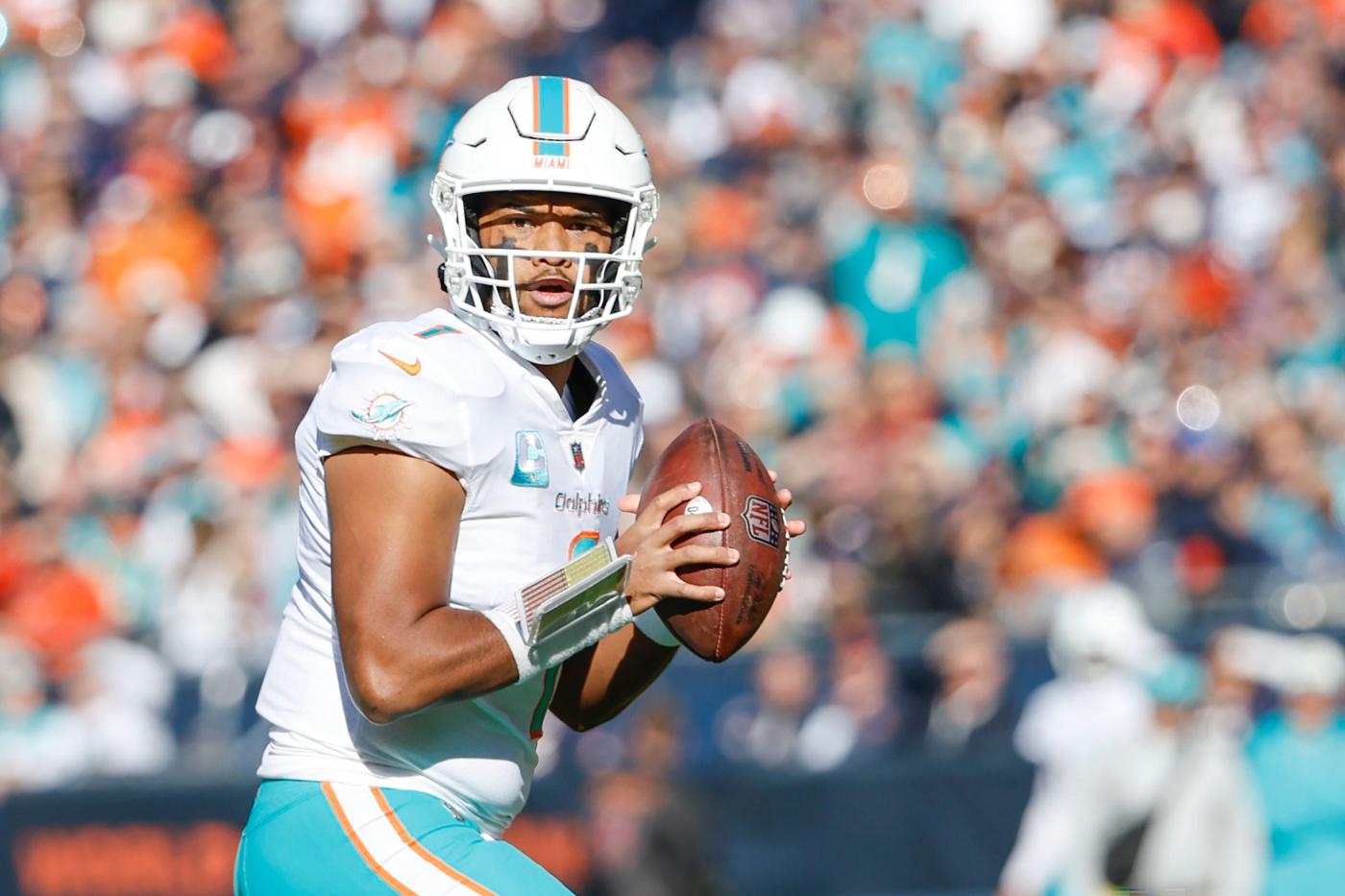 To this point in Tua Tagovailoa’s professional career, he’s been accustomed to having to prove doubters wrong.

He keeps receipts, like he said in his NBC interview ahead of his “Sunday Night Football” return from a concussion against the Pittsburgh Steelers on Oct. 23. He has taken subtle jabs at those that criticize his arm strength — like last week — and called out the “Twitter warriors” in the offseason.

The Miami Dolphins quarterback is beginning to receive public praise after stringing together what are, by passer rating, the two best games of his three-year NFL career.

His 29-of-36 performance for 382 yards, three touchdowns and no interceptions against the Detroit Lions on Oct. 30 was good for a 138.7 rating, the best in his career. Second-best was the outing he just had versus the Chicago Bears, going 21 of 30 for 302 and, again, three touchdowns without an interception (135.7).

“Do you doubt that he’s handling it well?” coach Mike McDaniel quipped when he was asked about Tagovailoa dealing with admiration from observers instead of criticism. “Let’s motivate that guy.”

Tagovailoa was named the NFL’s FedEx Air Player of the Week for the second consecutive week and third time this season. That means half the games he has started and finished have resulted in him earning that weekly honor.

But it doesn’t surprise McDaniel that his budding quarterback is handling success well.

“Anything that’s happening with him isn’t a surprise to me,” he said. “Just because of the day-in, day-out work that I’m witnessing, work that his teammates do and how his rapport is with them and all of that.

“It doesn’t surprise me how he’s handled having some success because, literally, it has no distinction from when we first started working before Game 1, in training camp and OTAs, and that’s awesome. That’s what I would’ve guessed, but it’s been really cool to see. Case in point, he knows exactly who he is, he knows exactly what he needs to do to do his portion of his job well, and he’s not deviating from that at all. Very cool and good to see, but not surprising, in the least.”

Tagovailoa backed up that notion with his response to he different public narrative surrounding him.

“Just keep doing what we’ve been doing as a team, continue to work on the things we need to get better at,” he said Wednesday after starting the week of practice in preparation for the Cleveland Browns (3-5) at home Sunday.

The same way McDaniel credits Tagovailoa for his approach, Tagovailoa said much of the credit to Miami’s offensive success goes to his new coach.

“We’re all having fun. We’re feeling comfortable in this offense that we’ve had to all learn, that’s been new for us,” Tagovailoa said. “It’s cool to see that all the hard work, throughout OTAs and training camp, has paid off to this point.”

Tagovailoa has won 12 of the past 13 games he has started and finished. He is the NFL’s highest-rated passer with a rating of 115.9, on pace to best Dan Marino’s 1984 record of 108.9. Wide receiver Tyreek Hill’s 1,104 yards is the most any NFL receiver has had through nine games. Hill and fellow receiver Jaylen Waddle’s combined 1,918 receiving yards is the most for teammates to this point in a season in the Super Bowl era.

But Tagovailoa is still just looking to get even better, which he made clear in his on-field interview with CBS immediately following the 35-32 win at Chicago on Sunday and followed up with Wednesday.

“It’s not something that we’re satisfied with,” Tagovailoa said. “We’ll keep going, continue to learn and build off of things we need to, but we’ll continue to find ways to do things that we’re good at and try to do them well continuously.”

Tagovailoa said what’s best about McDaniel’s offense is how he tailors things to his and his teammates’ strengths, which could differ from what his offense looked like in San Francisco.

Tagovailoa will get to see his teammate from last year, Jacoby Brissett, on the opposite side Sunday.

Brissett has been Cleveland’s starter all season with Deshaun Watson serving an 11-game suspension. Tagovailoa’s backup in Miami last season has thrown seven touchdowns to five interceptions for 1,862 yards and is completing 63.9 percent of passes.

“I’m excited to watch Jacoby play,” Waddle said. “I’ve been watching him play all season. He’s been playing great, so it’s going to be good. Jacoby’s real funny so I’m excited to just chop it up. I know he’s got some jokes for us, for sure.”

In his past two outings, Brissett is 39 of 49 for 536 yards, a touchdown and no interceptions. The two games resulted in a 32-13 win over the Cincinnati Bengals and a tight, 23-20 loss to the Baltimore Ravens.