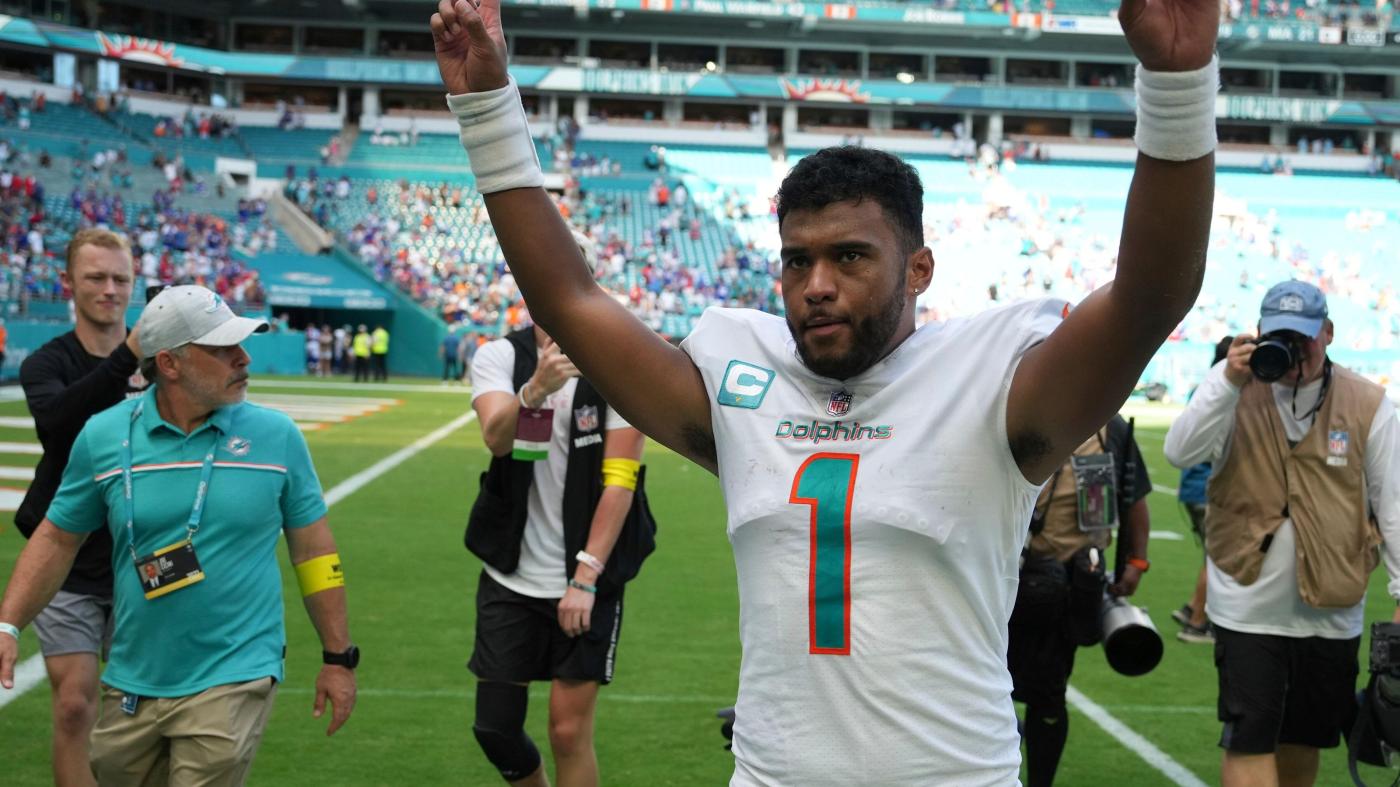 Tua, Terron and Tyreek. The band is back together.

Quarterback Tua Tagovailoa, left tackle Terron Armstead and wide receiver Tyreek Hill are the Dolphins’ quintessential offensive triumvirate. Each is a team captain, each is a cornerstone of coach Mike McDaniel’s innovative offense, and each, at least analytically, is among the league’s best at what they do. They’ll join forces as starters for the first time this month Sunday night against Pittsburgh at Hard Rock Stadium.

In the big picture, a lot of forces will collide at the 8:20 p.m. kickoff.

The 1972 Dolphins will be honored, owner Steve Ross returns from a suspension, and former coach Brian Flores returns as a member of Pittsburgh’s coaching staff as the Dolphins play a Sunday night prime-time game.

“It’s kind of like the perfect story — playing our former coach, Tua is coming back, coming off a three-game losing streak, it’s a prime-time game,” Dolphins linebacker Jerome Baker said. “This is what football is. This is where you really see who really cares about football and it’s time for the Dolphins to bounce back and get a win under our belt.”

But the biggest on-field story is Tua, Terron and Tyreek.

No, they can’t cure all of the offense’s concerns.

However, the pinpoint-accuracy of Tagovailoa, along with the rock-solid play of Armstead and the game-breaking skill of Hill might be just what the Dolphins (3-3) need to end their three-game losing streak and get pointed in a more positive direction, a direction that aligns them to take advantage of the next few games, during the so-called “soft” part of the schedule among Pittsburgh, Detroit, Chicago, Cleveland, and Houston.

To take a bigger leap forward, having Tua, Terron and Tyreek could mean it’s time for McDaniel’s enticing offense to finally get going, get the running game producing, the pass protection solidified and the passing game consistently effective. After all, these guys are good. Tagoaviloa is the league’s sixth-rated quarterback, according to Pro Football Focus, Hill, a five-time All Pro, is the No. 1-rated wide receiver, and Armstead, a three-time Pro Bowl selection, is the 13th-rated offensive tackle.

In other words, it’s time to dream again, and dream big.

For now, just know that the (re)union of Tua, Terron and Tyreek, who are all having good seasons, means the offense can breathe again, it means good things for an offense that could use some good news.

This is with all apologies and consideration to wide receiver Jaylen Waddle, who is also necessary personnel.

But here’s the offensive reality through six games — the Dolphins struggle to score touchdowns.

The Dolphins offense has produced 15 touchdowns, tied for 14th in the league (linebacker Melvin Ingram has one touchdown).

Subtract that four-touchdown outburst in the fourth quarter at Baltimore and the Dolphins offense has produced 11 touchdowns in 23 quarters.

Regardless of what you think about McDaniel’s creativity and play-calling, it hasn’t led to consistent production.

Having Tua, Terron and Tyreek together should certainly help as this undefined offense tries to find its identity.

“That’s my guy, that’s little bro,” Armstead said of Tagovailoa. “Look, man, I’m excited to see him. He was excited for me to be back out there [Thursday], too. But we all want to be out there and get this thing going and win a big game Sunday.”

Granted, the offense might not sparkle against Pittsburgh (2-4), but with Tua, Terron and Tyreek together and healthy, there’s reason to think about possibilities, about what this offense threatened to be on paper, and showed to be in training camp, and in the regular season against Baltimore, and even against Buffalo.

Tagovailoa and Armstead will both have to iron out some wrinkles, no doubt.

But the offense gets a boost in performance, mindset and mentality with its most meaningful trio on the field together, making plays, covering mistakes, not being perfect, but being really good. And sometimes being patient.

“I’ve just got to be myself,” Tagovailoa said. “I’m not the savior of this team. I don’t just come in and we start winning games. It’s a team deal. The defense gets us stops, the offense goes and puts points on the board, and the defense can help put points on the board as well as special teams.”

On that note, yes, the Dolphins offense has shown a few signs that things are progressing at a reasonable pace. They’re eighth in offense (366.2 yards per game), and second in passing (285 ypg).

And pass protection has been leaky.

McDaniel’s dynamic offense has wheezed and sputtered this season among three starting quarterbacks, a rotation of left and right tackles, and a run game that’s only been reliable once.

Tua, Terron and Tyreek are together once again.