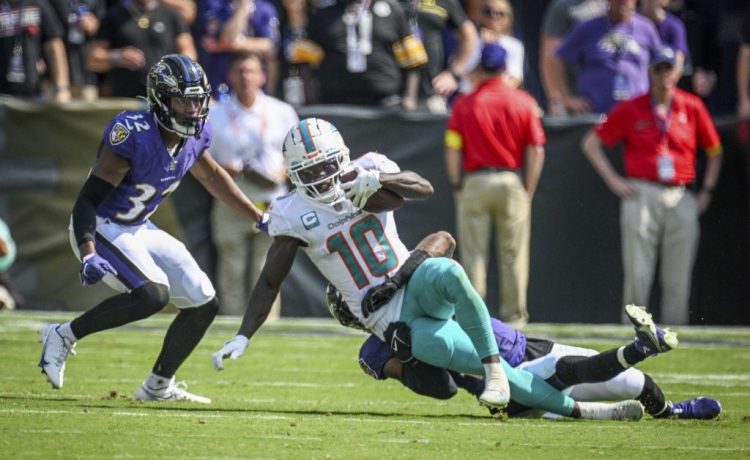 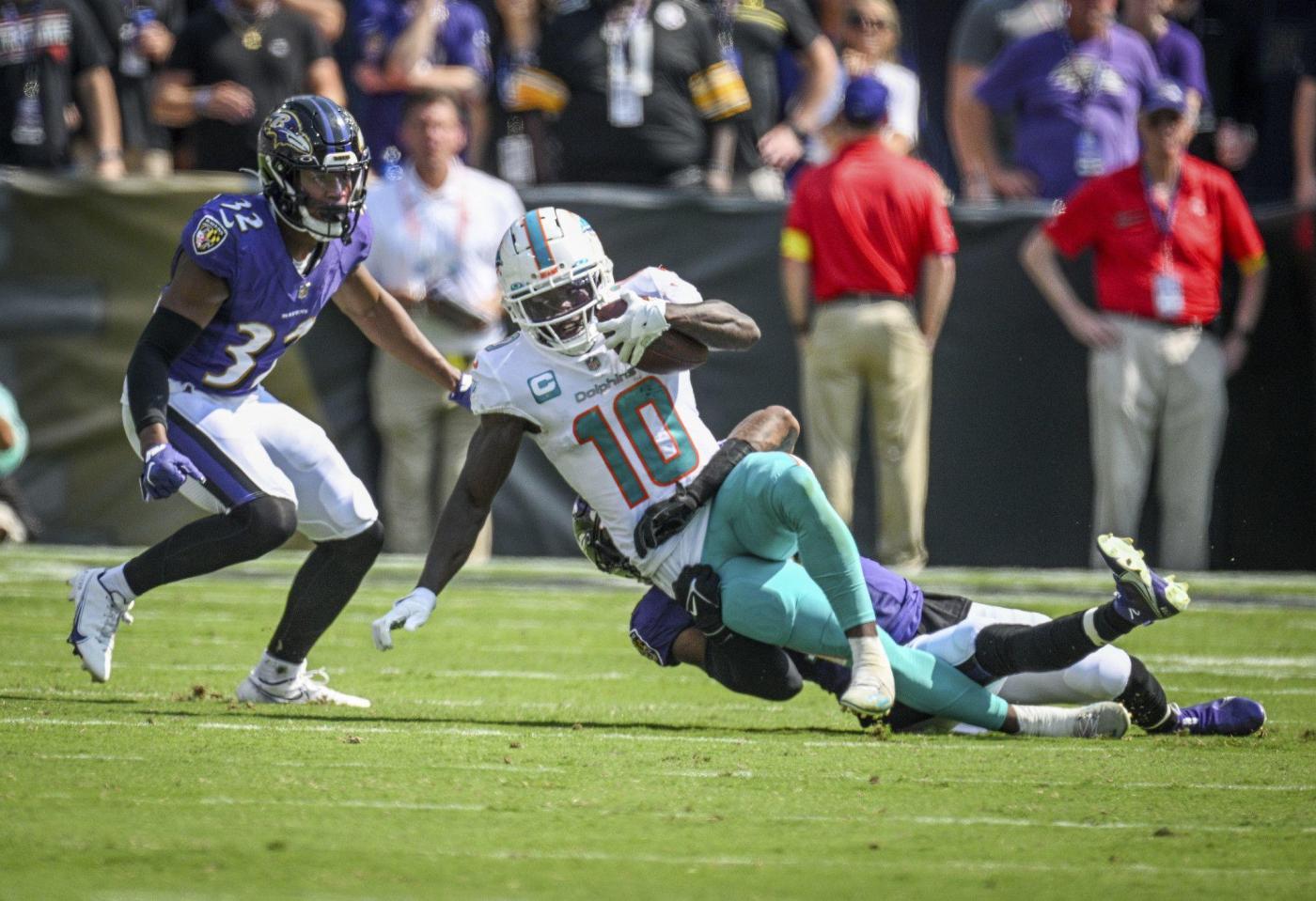 Enough electricity for you on a Sunday?

A 103-yard kickoff return 13 seconds into the game. Two touchdowns within 31 seconds in the first half A record for big plays by Baltimore quarterback Lamar Jackson and … then a fourth quarter straight out of Dan Marino for Tua Tagovailoa.

Here are 10 thoughts on the Miami Dolphins’ 42-38 win against Baltimore:

1. Player of the day. Tua Tagovailoa had the kind of second half that you can hang every hope on. It came down to who made the last play and Tua threw his fourth touchdown of the fourth quarter with 14 seconds left. This one to Jaylen Waddle put the Dolphins up, 42-38. Tua completed 36-of-50 passes for 469 yards and six touchdowns. He brought the Dolphins back, repeatedly, including with just over two minutes and Baltimore leading, 38-35. This performance looks even better considering what Lamar Jackson was doing on the other side and Tua’s up-and-down start. In the first half, he had a great touchdown drive (5-for-5 for 97 yards) but two marginal interceptions. In the second half, touchdowns. He came out with a strong drive to start the second half capped by a well-placed ball that Mike Gesicki jumped for at the back of the end zone. It was on after that.

2. (Almost) Player of the day: Jackson was the first player in NFL history to run for a touchdown of 79 yards and pass for one of 75 yards in the same game. The Dolphins frustrated him last November, and the Pompano Beach-native seemed on his way to a measure of payback Sunday until the fourth quarter. For the day, Jackson completed 21-of-28 passes for 318 yards and three touchdowns.

3. Stat of the game: Tyreek Hill left the game in the third quarter with cramps and was listed as “questionable” to return. He had six catches for 48 yards. He returned in the fourth quarter and finished the day with 11 catches for 190 yards and two touchdowns (of 48 and 60 yards).

4. Here’s what you don’t want against Baltimore: The game coming down to a Justin Tucker kick, even from 51 yards it was in Sunday’s fourth quarter. He kicked a 66-yarder last week. He’s a career 91-percent kicker. He reached 300 field goals quicker than any kicker in NFL history. He made that 51-yarder, of course, to give Baltimore a 38-35 lead with 2:23 left. That left enough time for Tagovailoa and the offense to win it.

5. There are bad ways to start a game, worse ways and then there’s the 103-yard kickoff return by Baltimore’s Devin Duvernay that started Sunday. Thirteen seconds into the game it was 17-0. The last time an opponent ran a kickoff back was Buffalo in 2019. The last time an opening kickoff was returned against the Dolphins was in 2010 at Oakland. Here’s the more pertinent fact: After a good 2020, the Dolphins special teams ranked 29th in the league last year according to Football Outsiders. They can’t have another year like that, meaning they can’t give up returns like this.

6. Get on the wheelbarrow? Mike McDaniel showed again how he’s going to coach by going on fourth down in his own territory twice in the second quarter. On fourth-and-1 at his 34 and fourth-and-1 at his 45, McDaniel kept the offense on the field and got first downs. The game situation with the Dolphins trailing by two touchdowns might have had something to do with it. Then again, it wasn’t anything we didn’t see in the opener.

* Waddle had the second, 100-yard receiving game of his career. The other was 137 yards last year against Carolina. He had 11 catches for 171 yards Sunday;

* Maybe the New York Jets aren’t as bad as expected? They beat Cleveland, 31-30.

9. Some good news for the defense: The Dolphins flexed its inside muscle on Sunday in a manner to note. In the fourth quarter, it stopped Jackson on fourth-and-1 at the Dolphins 41 to hand the ball back to the offense (it scored to make it, 35-28). It also had the kind of goal-line stand in the first half that said something good about its inside play. Baltimore had first-and-goal from the 2-yard line after an 82-yard drive that took about 10 minutes to get to this point. Two runs by Mike Davis over right guard got inside the 1. Jackson ran a sneak that was initially ruled a touchdown before overturned after a long delay. On that play, safety Jevon Holland stood up Baltimore tackle Daniel Faalele in a way that stopped Jackson. On fourth down and an inch, Jackson lost the ball going into the line and the Dolphins recovered. That kind of sequence says this defense isn’t going to be pushed around much. When Baltimore had a first-and-goal at the 1 the next time, there was a fake run up the middle and Jackson threw to a wide-open Andrews in the end zone.

10. Next week: Buffalo at Dolphins. The Bills play host to Tennessee on Monday night, meaning they’ll be operating on a short week before coming to South Florida. Buffalo has won the last seven meetings, including 35-0 and 26-11 wins against the Dolphins last year. The last time the Dolphins won was in 2018 when Ryan Tannehill threw a fourth-quarter touchdown to Kenny Stills. Yes, it was that long ago.