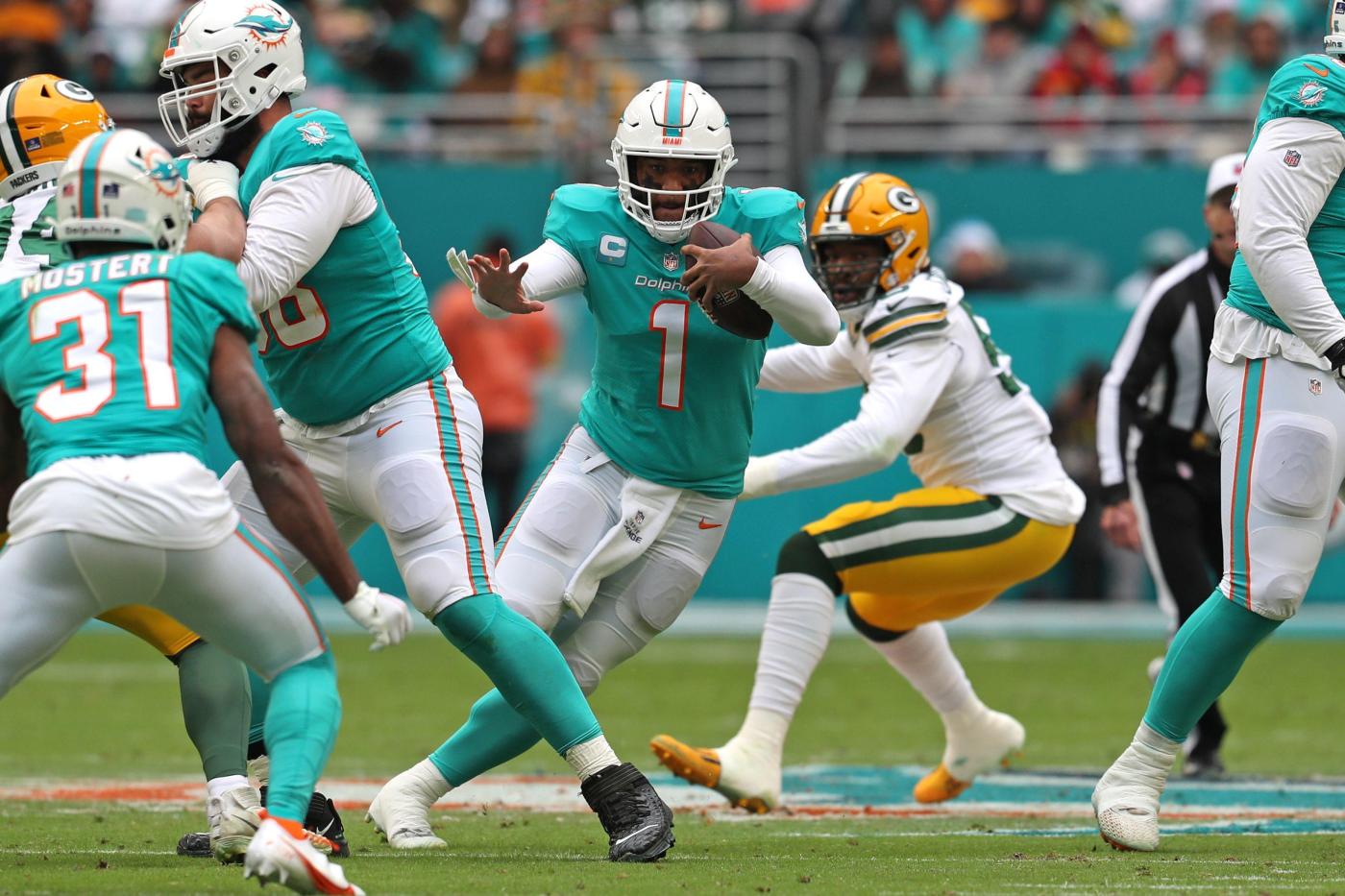 Mike McDaniel wanted his Miami Dolphins (8-7)to understand what it’s like to play in big games in December?

Here are 10 thoughts on the Miami Dolphins’ 26-20 loss to the Green Bay Packers.

1. Stat of the game: Dolphins’ four turnovers, Packers’ one. The Dolphins were up 20-10 and at their 49-yard line when Raheem Mostert fumbled on the first play after the two-minute warning before the half. So what could have been a Dolphins score turned into a Green Bay field goal to make it 20-13. That’s the kind of story the turnovers told. Also …

3. The Dolphins’ playoff hopes remain in their control. They’re still in decent shape despite having lost four in a row. Win against the Patriots next week and the Jets in the regular-season finale and they’re still in. They might not even need to win both games depending on how other teams play out their finish. A month ago, the Dolphins were talking of an AFC East title and beyond. Now? It’s just getting in the playoffs.

4. There’s been a lot of valid questions about the Dolphins defense, but they were home again Sunday and, again at home, they played well. Green Bay’s first possession started at the Dolphins’ 7-yard line due to a 93-yard kickoff return. The defense held for a field goal. Green Bay got the ball at the Dolphins 14 early in the fourth quarter. Again, the defense held for field goal. They entered Sunday giving up 15.3 points at home and 32 points on the road. Could they win Sunday? No, but they made some game-turning plays. Early in the fourth quarter, cornerback Kader Kohou intercepted Rodgers in the end zone to stop a drive. They then held Rodgers to a field goal after Tagovailoa’s second interception to give the offense a chance to win.

5. You still can’t overstate the impact the speed and talent of Tyreek Hill and Jaylen Waddle. Hill made the Pro Bowl and you again saw why when he got deep on Green Bay for a 52-yard catch to the Green Bay 1 in the second quarter. Waddle didn’t make the Pro Bowl — he’s the first alternate — and you saw why he could have with an 11-yard catch on a nice touch pass by Tua that Waddle turned into an 84-yard touchown in the first quarter. Beyond these catches, listen to how receivers coach Wes Welker described their impact on defenses last week — and therefore, what the Dolphins can do.

“We’re getting two-man [safeties] a lot on first and second down,” Welker said. “Nobody does that. You don’t see that around the league. I think just the way defenses have to prepare for us and if you want to play single safety, go ahead.

“Those two guys are very, very hard matchups for anybody — the best corners in the league and all of them. We rely on those guys heavily whenever they want to take away any of our run game or play [one safety]. They’ve got to make sure they’re bringing their A-game, and most teams are going to have to play two-high and make sure they keep things in front of them, which opens up our whole offense.”

6. Under review: The Dolphins under-review plan. McDaniel said after the game the replay of a key play didn’t arrive in time for him to throw the flag. Rodgers’ under-pressure, under-armed throw of 31 yards to tight end Marcedes Lewis showed his four-time MVP talent. It also brought into question why the Dolphins didn’t challenge the replay. The Fox broadcast referee, Mike Pereira, said the ball was incomplete. So instead of having second-and-10 at the Dolphins 38, it was first-and-goal at the 7. This has come up a few times this season and, again on Sunday could have tilted the day. That pass put the ball at the Dolphins’ 7-yard line. A play later, the Packers scored and tied the game at 20-20.

7. Special teams — and special thinking: After their opening field goal, the Dolphins gave up a 93-yard kickoff return that set up a Packers touchdown. Special teams have been a sensitive issue for the Dolphins this year, and it played a role Sunday. In the second quarter, the Packers strangely ran a fake punt with a snap to the short man, safety Dallin Leavitt, on fouth-and-2 at their 20-yard line. You’ve got Rodgers and do this? Give the Dolphins credit: They were ready, as they had their defensive line out there with Raekwon Davis making the stop for no gain.

8. This was the second-coldest home game in Dolphins history. It was 46 degrees at the opening kickoff. The other coldest games and the result (as compiled by the Dolphins’ Brett Brecheisen):

* Bradley Chubb hurt his hand in the first half and played with it wrapped;

* Jason Sanders made field goals of 46 and 34 in the first half and his mini-slump a few games ago seemed done with. Then he missed a 48-yarder in the third quarter;

* After a week discussing if the Dolphins should run more on third-and-short, the Dolphins had third-and-3 on the first drive and threw incomplete to Tyreek Hill. You’d take that one-on-one matchup against CB Rasul Douglas anytime. This one didn’t work, and the Dolphins kicked a field goal;

The Dolphins had three holding penalties called on them in three consecutive offensive series in the first half. Then again, the Dolphins’s secondary had back-to-back pass interferences that weren’t called — the second when Kohou intercepted Rodgers early in the fourth quarter. This leads to a weekly note by @RickGosselin9, a veteran NFL writer who compiles refereeing stats. Home teams were 4-8-1 entering Sunday with the Land Clark crew that refered the Dolphins on Sunday.

10. Next week: Dolphins at Patriots. It’s forecast to be in the 50s in New England, meaning it was colder Sunday at Hard Rock Stadium than it will be in Foxborough. The Patriots entered Sunday with playoff hopes on life support after tough losses to the Raiders and Bengals the past two weeks. The Dolphins beat New England in the opener this season, 20-7.