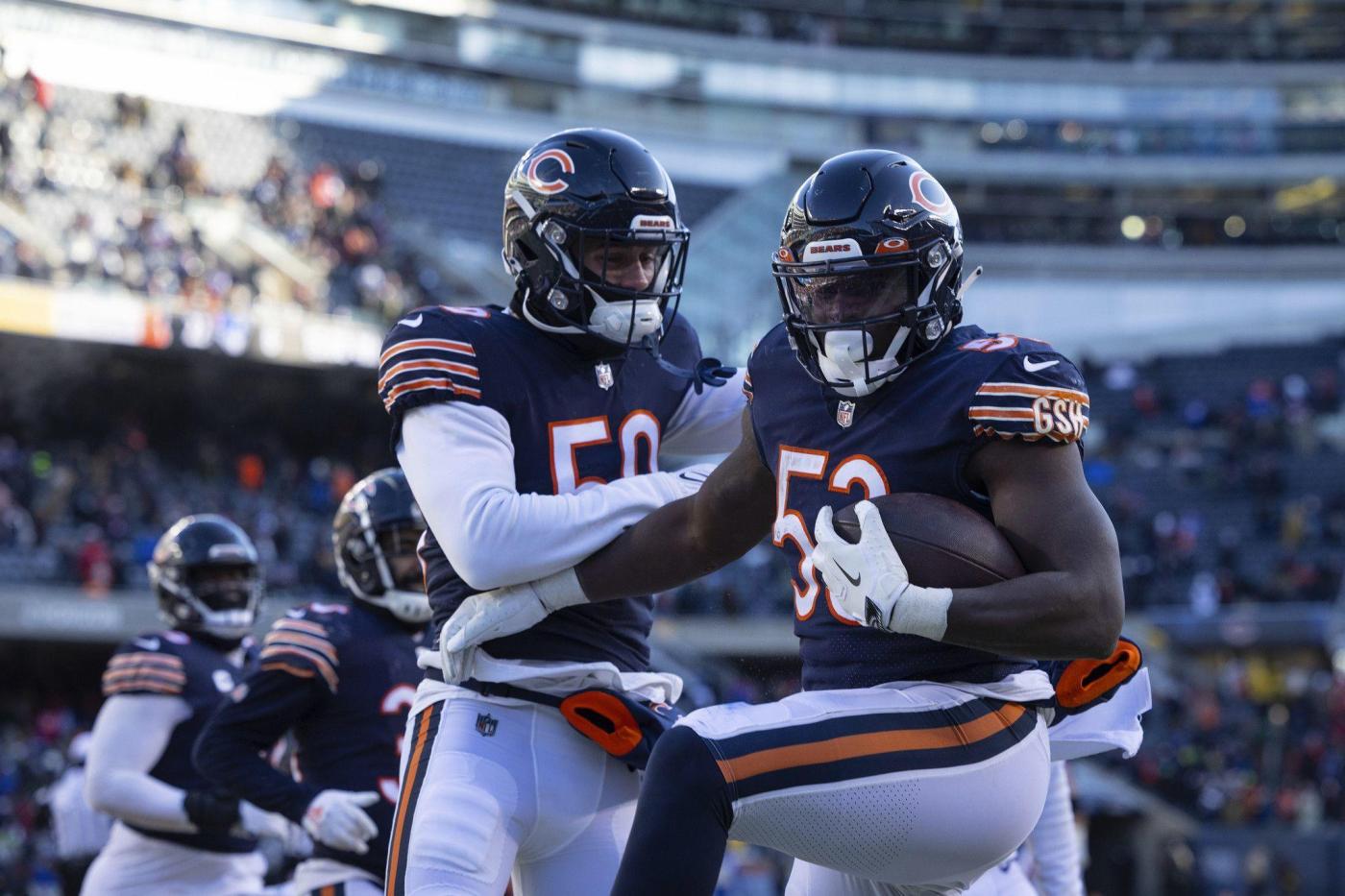 In a span of three minutes in the third quarter Saturday at Soldier Field, the Buffalo Bills hit the Chicago Bears with a pair of long touchdown runs that were as painful as a biting wind hitting exposed skin.

The Bears had a four-point halftime lead, giving hope to the fans who braved the Christmas Eve game with a minus-12 windchill at kickoff. But the Bills turned the tables by the middle of the third quarter with Devin Singletary’s 33-yard touchdown run and James Cooks’ 27-yard touchdown en route to a 35-13 victory over the Bears.

In the last two games, against two of the best teams in the NFL, the Bears defense has recorded four interceptions and two fumble recoveries.

The Bears had three Saturday — interceptions from rookie cornerback Kyler Gordon and linebacker Nicholas Morrow and a fumble recovery from rookie Elijah Hicks.

They have done that while missing many of their best players because of injury. Safety Eddie Jackson (foot), cornerbacks Jaylon Johnson (finger/rib) and Kindle Vildor (ankle) and linebacker Jack Sanborn (ankle) are all out for the rest of the season.

But while the Bears have come up with some big plays, they also have given up a lot.

Against the Philadelphia Eagles, the Bears allowed Jalen Hurts to pass for 315 yards. And on Saturday, while battling weather that Brisker said required extra effort “to stay mentally in the game,” the Bills rushed for 254 yards, including 106 from Singletary, 99 from Cook and 41 from quarterback Josh Allen.

“Just stay gap accountable,” Brisker said. “Everybody’s got a job to do on the defense, and if you don’t do your job someone’s going to be wide open. Untouched? That’s the results. Somebody didn’t do their job.”

When Singletary took a third-quarter handoff from Allen on the Bills’ first drive of the second half, Morrow was about to move into a hole to stop him when right tackle Spencer Brown sprinted to his left and blocked Morrow out of the way.

Singletary shot through the hole, juked Brisker and beat cornerback Josh Blackwell to the end zone for a 33-yard touchdown and a 14-10 lead.

Said Brisker: “Just seeing a hole burst wide open, untouched, I tried to get him down. He made a good cut and he scored.”

Less than three minutes later, after the Bills regained the ball on a David Montgomery fumble, the Bills broke for another big run. Cook found a hole near the right hash, sped by the attempts of Joe Thomas and DeAndre Houston-Carson to stop him and cruised into the end zone for a 27-yard touchdown run.

“That’s just a misfit,” Morrow said. “So guys have got to stay in the gap.”

The Bears were within eight points in the fourth quarter, but Allen ran for a 4-yard touchdown with 3:51 to play to essentially put the game away.

Gordon started the takeaway parade in the second quarter when he jumped in front of Allen’s deep pass to Isaiah McKenzie in the end zone and returned it to the 34. It was Gordon’s third interception this season and second in as many games after picking off Hurts on Sunday.

“On that play I was just reading the formation,” Gordon said. “Going through my head shuffling like different possibilities and calls, and one of the possibilities ended up being what I was thinking.”

Linebacker Matt Adams forced Gabe Davis to fumble late in the third quarter, and Hicks recovered it. The Bears offense didn’t capitalize with a score, but two plays after the Bills got the ball back, Morrow got his first interception since 2020 when Allen’s pass up the middle came right to him.

“Honestly, he just overthrew it and I was there,” Morrow said. “It was nice to get a pick again, and I hope I can get another couple before it’s over.”

The takeaways in the loss had the Bears leaving Soldier Field with mixed emotions.

“It would be a little bit more satisfying with the win, most definitely,” Gordon said. “We got the takeaways. Now it’s about getting off the field on third down. Just moving onto the next objective to help us as a team as a whole, to help get the ball back to the offense.”