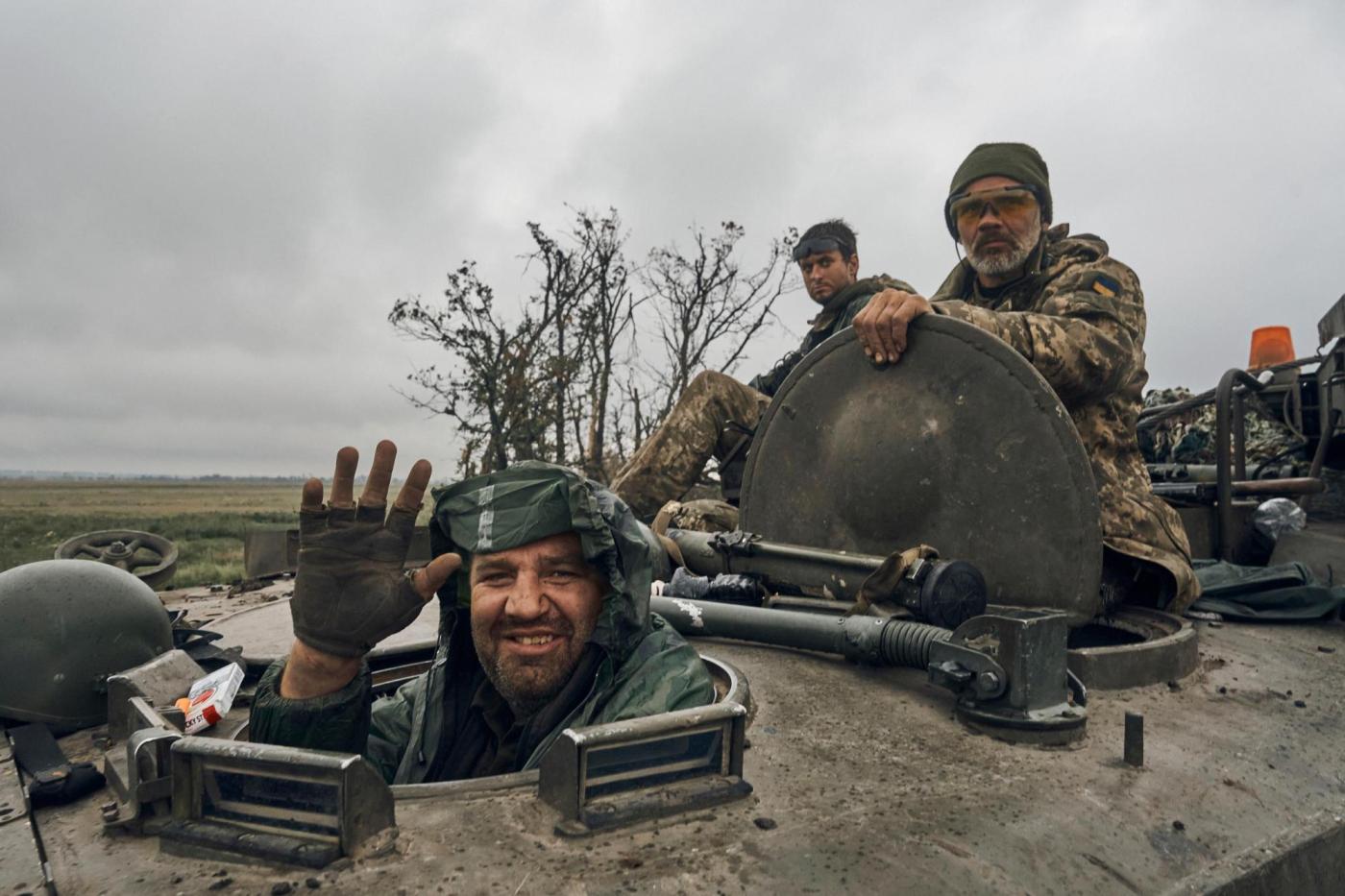 By ELENA BECATOROS and HANNA ARHIROVA

As the advance continued, Ukraine’s border guard services said the army took control of Vovchansk — a town just 3 kilometers (2 miles) from Russia seized on the first day of the war. Russia acknowledged that it has withdrawn troops from areas in the northeastern region of Kharkiv in recent days.

Russian troops were also pulling out from the southern city of Melitopol, the second-largest city in Ukraine’s southern Zaporizhzhia region, the city’s pre-occupation mayor said. His claim could not immediately be verified.

Melitopol has been under Russian occupation since early March. Capturing it would give Kyiv the opportunity to disrupt Russian supply lines between the south and the eastern Donbas region, the two major areas where Moscow-backed forces hold territory.

Melitopol Mayor Ivan Fedorov wrote on Telegram that the Russian troops were heading toward Moscow-annexed Crimea. He said columns of military equipment were reported at a checkpoint in Chonhar, a village marking the boundary between the Crimean peninsula and the Ukrainian mainland.

In the newly freed village of Chkalovske in the Kharkiv region, Svitlana Honchar said Russians’ departure was sudden and swift.

“They left like the wind,” Honchar said Tuesday after loading cans of food aid into her car. “They were fleeing by any means they could.”

Some Russians appeared to have been left behind in the hasty retreat. “They were trying to catch up,” she said.

It was not yet clear if the Ukrainian blitz, which unfolded after months of little discernible movement, could signal a turning point in the nearly seven-month war.

But the country’s officials were buoyant, releasing footage showing their forces burning Russian flags and inspecting abandoned, charred tanks. In one video, border guards tore down a poster that read, “We are one people with Russia.”

Momentum has switched back and forth before, and Ukraine’s American allies were careful not to declare a premature victory since Russian President Vladimir Putin still has troops and resources to tap.

In the face of Russia’s largest defeat since its botched attempt to capture Kyiv early in the war, Defense Ministry spokesman Igor Konashenkov said troops were hitting back with “massive strikes” in all sectors. But there were no immediate reports of a sudden uptick in Russian attacks.

Ukrainian President Volodymyr Zelenskyy said that Ukrainian forces were carrying out “stabilization measures” across recaptured territory in the country’s south and east, and rounding up Russian troops, “saboteurs” and alleged collaborators.

In his nightly televised address, Zelenskyy also pledged to restore normalcy in the liberated areas.

“It is very important that together with our troops, with our flag, ordinary, normal life enters the de-occupied territory,” he said, citing an example of how people in one village had already begun receiving pension payments after months of occupation.

Reports of chaos abounded as Russian troops pulled out — as well as claims that they were surrendering en masse. The claims could not be confirmed.

Ukrainian Deputy Minister of Defense Hanna Maliar said Kyiv is trying to persuade even more Russian soldiers to give up, launching shells filled with flyers ahead of their advance.

“Russians use you as cannon fodder. Your life doesn’t mean anything for them. You don’t need this war. Surrender to Armed Forces of Ukraine,” the flyers read.

Since Saturday, the Kharkiv regional police have repeatedly reported that local law enforcement officers have found civilian bodies bearing signs of torture across territories formerly held by Russia. It was not possible to verify their statements.

On Tuesday, regional police alleged that Russian troops had set up “a torture chamber” at the local police station in Balakliya, a town of 25,000, that was occupied from March until last week.

In a Facebook post, the head of the police force’s investigative department, Serhii Bolvinov, cited testimony from Balakliya residents and claimed that Russian troops “always kept at least 40 people captive” on the premises.

In one indication of the blow sustained by Moscow, British intelligence said that one premier force, the 1st Guards Tank Army, had been “severely degraded” during the invasion, along with the conventional Russian forces designed to counter NATO.

“It will likely take years for Russia to rebuild this capability,” the analysts said.

But even if Putin were to sit down at the negotiating table, Zelenskyy has made it clear that Russia must return all Ukrainian territory, including Crimea, Gallyamov said.

“This is unacceptable to Moscow, so talks are, strictly speaking, impossible,” he said.

Putin’s previous actions “have restricted his room to maneuver,” so he “wouldn’t be able to put anything meaningful on the table.”

For talks to be possible, Putin “would need to leave and be replaced by someone who’s relatively untarnished by the current situation,” such as his deputy chief of staff, the Moscow mayor or the Russian prime minister, Gallyamov said.

The retreat did not stop Russia from pounding Ukrainian positions. It shelled the city of Lozova early Tuesday in the Kharkiv region, killing three people and injuring nine, said regional Gov. Oleh Syniehubov.

And Ukrainian officials said Russia kept up shelling around Europe’s largest nuclear facility, where fighting has raised fears of a nuclear disaster. The Nikopol area, which is across the Dnieper River from the Zaporizhzhia nuclear power plant, was shelled six times during the night, but no injuries were immediately reported, said regional Gov. Valentyn Reznichenko.

Strikes have also continued unabated on the city of Kharkiv, Ukraine’s second-largest and one that has been hammered by artillery for months.

Among Kharkiv’s battle-scarred apartment buildings, one man who returned to feed the birds struck a defiant tone, saying that the success of the Ukrainian counteroffensive would likely prompt harsh Russian retaliation against civilian targets. But he said it would not succeed in intimidating ordinary Ukrainians.

Putin “will strike so we don’t have water, electricity, to create more chaos and intimidate us,” said Serhii who only gave his first name. “But he will not succeed because we will survive, and Putin will soon croak!”

The counteroffensive has provoked rare public criticism of Putin’s war. Meanwhile, some of its defenders in Russia played down the idea that the success belonged to Ukraine, blaming instead Western weapons and fighters for the losses.