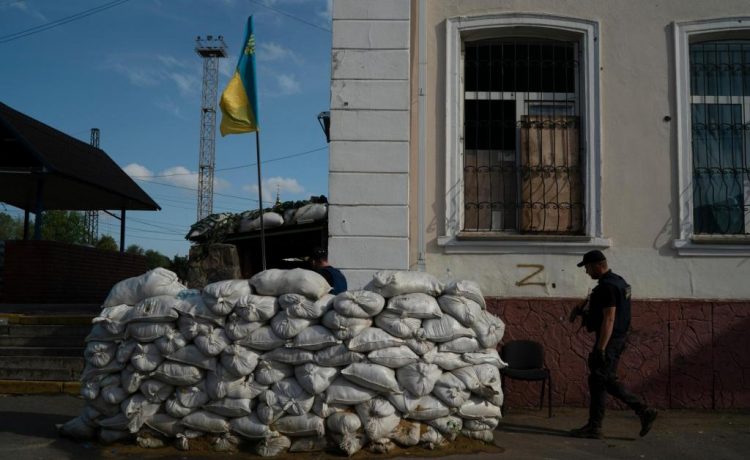 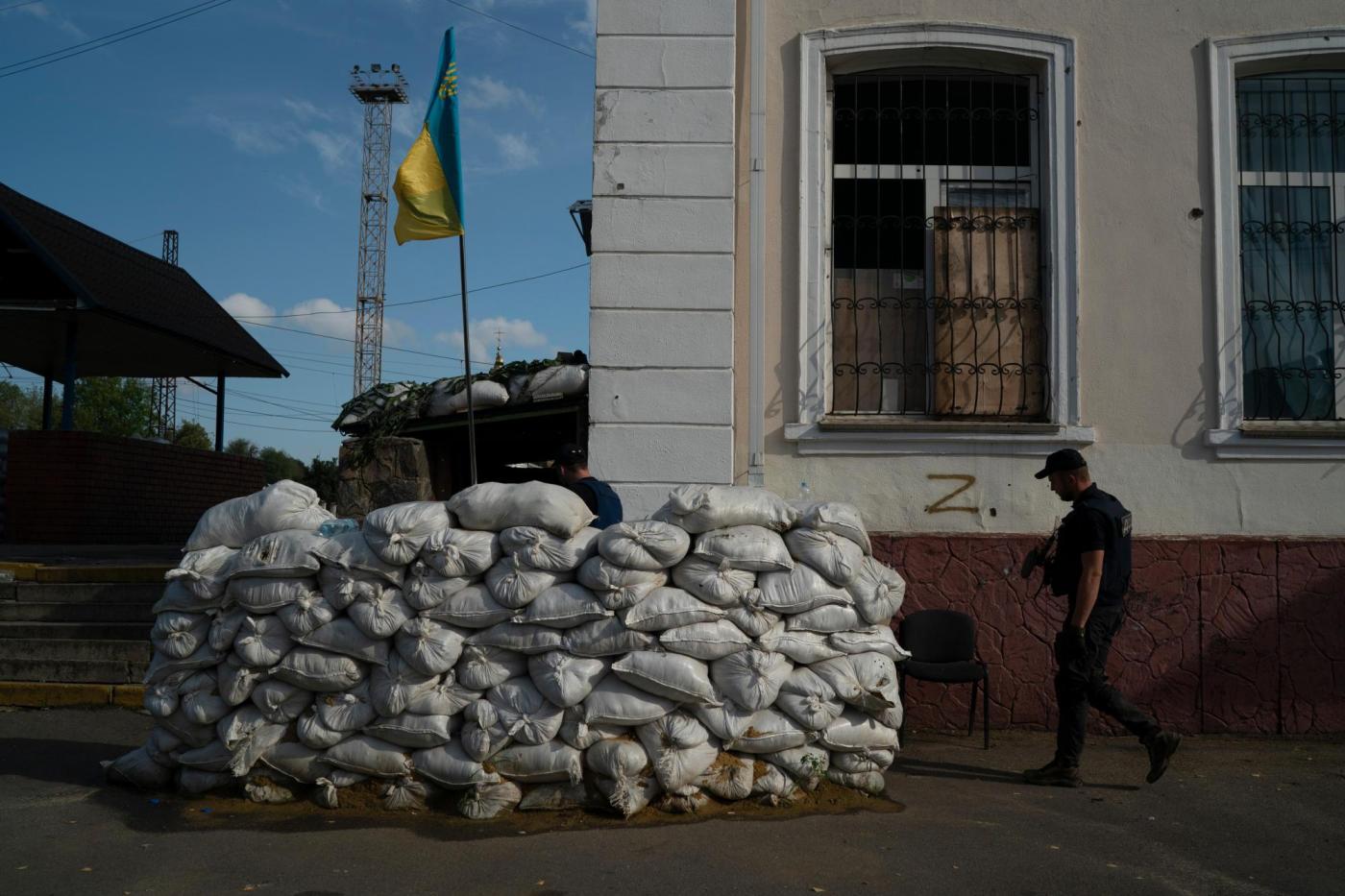 By KARL RITTER and JON GAMBRELL

KYIV, Ukraine (AP) — A Russian missile blasted a crater close to a nuclear power plant in southern Ukraine on Monday, damaging nearby industrial equipment but not hitting its three reactors. Ukrainian authorities denounced the move as an act of “nuclear terrorism.”

The missile struck within 300 meters (328 yards) of the reactors at the South Ukraine Nuclear Power Plant near the city of Yuzhnoukrainsk in Mykolaiv province, leaving a hole 2 meters (6 1/2 feet) deep and 4 meters (13 feet) wide, according to Ukrainian nuclear operator Energoatom.

The reactors were operating normally and no employees were injured, it said. But the proximity of the strike renewed fears that Russia’s nearly 7-month-long war in Ukraine might produce a radiation disaster.

This nuclear power station is Ukraine’s second-largest after the Zaporizhzhia Nuclear Power Plant, which has repeatedly come under fire.

The industrial complex that includes the South Ukraine plant sits along the Southern Bug River about 300 kilometers (190 miles) south of the capital, Kyiv. The attack caused the temporary shutdown of a nearby hydroelectric power plant and shattered more than 100 windows at the complex, Ukrainian authorities said. The U.N.’s International Atomic Energy Agency said three power lines were knocked offline but later reconnected.

Ukraine’s Defense Ministry released a black-and-white video showing two large fireballs erupting one after the other in the dark, followed by incandescent showers of sparks, at 19 minutes after midnight. The ministry and Energoatom called the strike “nuclear terrorism.”

The Russian Defense Ministry did not immediately comment on the attack.

Russian forces have occupied the Zaporizhzhia nuclear plant, Europe’s largest, since early after the invasion. Shelling has cut off the plant’s transmission lines, forcing operators to shut down its six reactors to avoid a radiation disaster. Russia and Ukraine have traded blame for the strikes.

The IAEA, which has stationed monitors at the Zaporizhzhia plant, said a main transmission line was reconnected Friday, providing the electricity it needs to cool its reactors.

But the mayor of Enerhodar, where the Zaporizhzhia plant is located, reported more Russian shelling Monday in the city’s industrial zone.

While warning Friday of a possible ramp-up of strikes, Putin claimed his forces had so far acted with restraint but warned “if the situation develops this way, our response will be more serious.”

“Just recently, the Russian armed forces have delivered a couple of impactful strikes,” he said. ”Let’s consider those as warning strikes.”

The mayor of the Russian-occupied eastern city of Donetsk, meanwhile, said Ukrainian shelling had killed 13 civilians and wounded eight there.

Patricia Lewis, the international security research director at the Chatham House think-tank in London, said attacks at the Zaporizhzhia plant and Monday’s strike on the South Ukraine plant indicated that the Russian military was attempting to knock Ukrainian nuclear plants offline before winter.

“It’s a very, very dangerous and illegal act to be targeting a nuclear station,” Lewis told The Associated Press. “Only the generals will know the intent, but there’s clearly a pattern.”

“What they seem to be doing each time is to try to cut off the power to the reactor,” she said. “It’s a very clumsy way to do it, because how accurate are these missiles?”

Power is needed to run pumps that circulate cooling water to the reactors, preventing overheating and — in a worst-case scenario — a radiation-spewing nuclear fuel meltdown.

Other recent Russian strikes on Ukrainian infrastructure have targeted power plants in the north and a dam in the south. They came in response to a sweeping Ukrainian counterattack in the country’s east that reclaimed Russia-occupied territory in the Kharkiv region.

Analysts have noted that beyond recapturing territory, challenges remain in holding it. In a video address Monday, Ukrainian President Volodymr Zelenskyy said cryptically of that effort, “I cannot reveal all the details, but thanks to the Security Service of Ukraine, we are now confident that the occupiers will not have any foothold on Ukrainian soil.”

The Ukrainian successes in Kharkiv — Russia’s biggest defeat since its forces were repelled from around Kyiv in the invasion’s opening stage — have fueled rare public criticism in Russia and added to the military and diplomatic pressure on Putin. The Kremlin’s nationalist critics have questioned why Moscow has failed to plunge Ukraine into darkness yet by hitting all of its major nuclear power plants.

— A governor said Ukraine had recaptured the village of Bilogorivka in the Russian-occupied eastern region of Luhansk. Russia didn’t acknowledge the claim.

— The Russian-installed leaders of Ukraine’s Luhansk, Donetsk and Kherson regions reiterated calls Monday for referendums to be held to tie their areas formally to Russia. These officials have discussed such plans before but the referendums have been repeatedly delayed, possibly because of insufficient popular support.

— The Supreme Court in the Russian-occupied region of Luhansk convicted a former interpreter for the Organization for Security and Cooperation in Europe and another person whose duties were not specified of high treason Monday. Both were sentenced to 13 years in prison.

—The Baltic nations of Estonia, Latvia and Lithuania closed their borders Monday to most Russian citizens in response to domestic support in Russia for the war in Ukraine. Poland will join the ban on Sept. 26.

— Mega-pop star Alla Pugacheva became the most prominent Russian celebrity to criticize the war, describing Russia in an Instagram post Sunday as “a pariah” and saying its soldiers were dying for “illusory goals.” Valery Fadeyev, the head of the Russian president’s Human Rights Council, accused Pugacheva of insincerely citing humanitarian concerns to justify her criticism and predicted that popular artists like her would enjoy less public influence after the war.