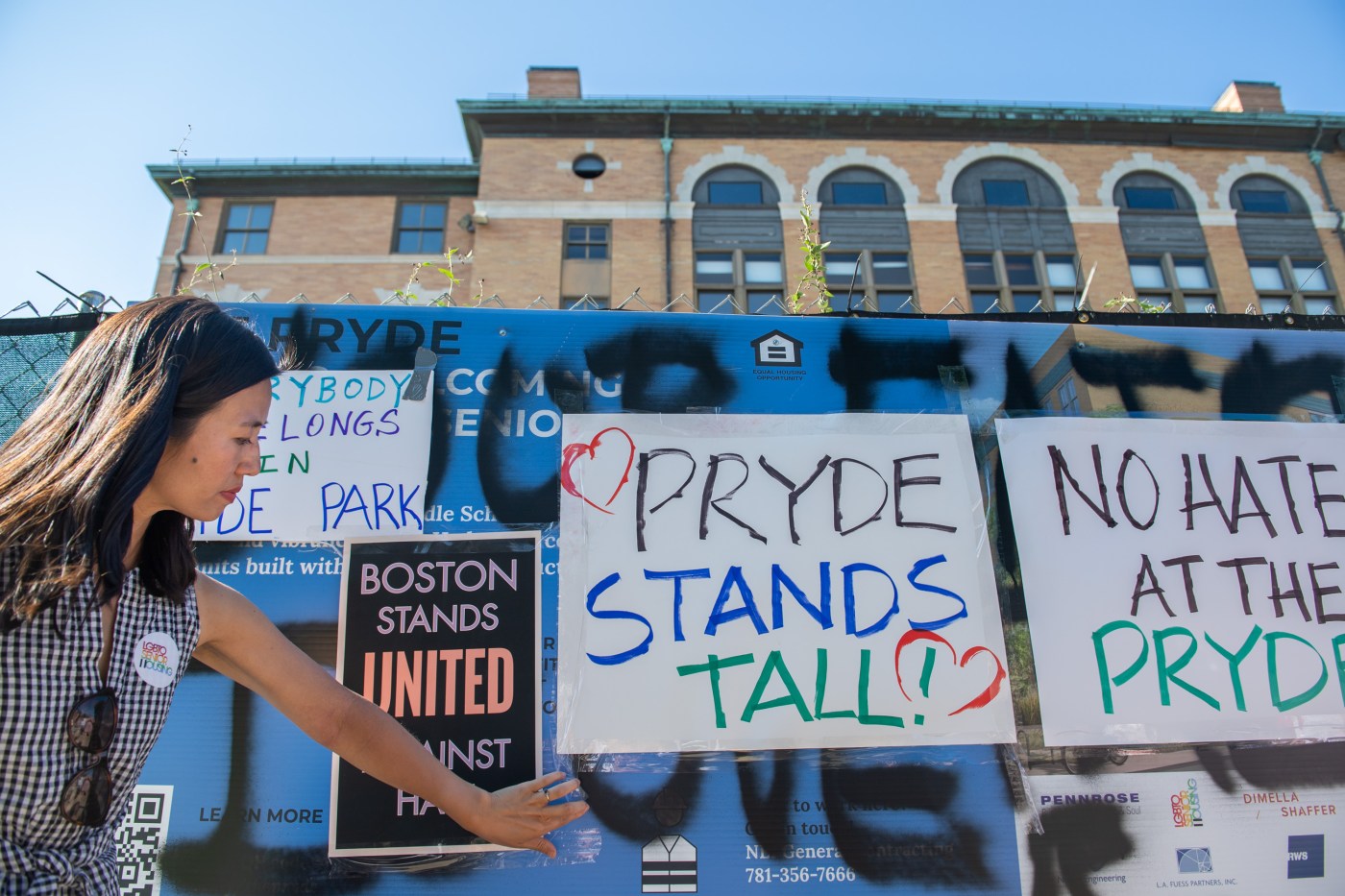 The Hyde Park community came together Sunday afternoon to physically cover hate with love — putting sentiments of LGBTQ support over graphically violent death threats and slurs left on a community project the night before.

The vandalism targeted the Pryde building construction, which will be the first building to offer affordable housing specifically reserved for LGBTQ seniors in the New England area. Community leaders last month broke ground on the new building, set to include 74 rental units, and the building is scheduled to open around fall 2023.

Just a couple weeks into construction, vandals were already out spray painting messages on the fencing around the site, threatening to burn the project down and kill members of the community.

But it only took organizers a couple of hours to rally more than 100 people, along with city and state representatives, to stand together in defiance of the threats.

“Although there are some who, under cover of darkness, seem to feel a need to spew hatred and try to intimidate or slow down the forces of representation, of love, of community, we have seen where this community stands already,” said Mayor Michelle Wu, as full-throated neighborhood support nearly drowned her out.

Wu emphasized that the Boston Police Civil Rights Unit is actively investigating the incident and reviewing camera footage from the area.

“This is the second straight weekend of Boston being marred by hatred and intolerance,” Suffolk District Attorney Kevin Hayden said in a statement, referencing a white supremacist march through downtown Boston the week before. “This cannot stand. My office will prosecute threats to the LGBTQ+ community wherever and whenever they occur.”

This type of attack, speakers said, makes the need for projects like the Pryde building more apparent than ever.

Speakers, including city councilors and state representatives of Hyde Park and many neighboring communities, spoke repeatedly of the need for unity and active support. Also, several noted wryly, the vandals had “picked the wrong old ladies to mess with.”

The “wrong old ladies” at the heart of the project referenced Gretchen Van Ness and Aileen Montour of LGBTQ Senior Housing Inc., the organization behind the Pryde building.

Van Ness and Montour made the calculated choice to leave the explicit and graphic graffiti up through Sunday to shock skeptics into better understanding the need for continued LGBTQ advocacy and protections.

The Pryde building is part of the solution to this type of hate, speakers said — a place “for people who lived through periods in which every major religion condemned them, who were told by the American Psychological Association their queerness was a disease, who survived the AIDS crisis,” Van Ness said, “to live safely and with dignity.”

By the end of the rally, organizers invited attendees to begin to cover the messages with their signs of love and support.