Todays Though > News > Victor Wenbanyama won’t be a Heat game-changer . . . or will he? – Boston Herald
News

Victor Wenbanyama won’t be a Heat game-changer . . . or will he? – Boston Herald 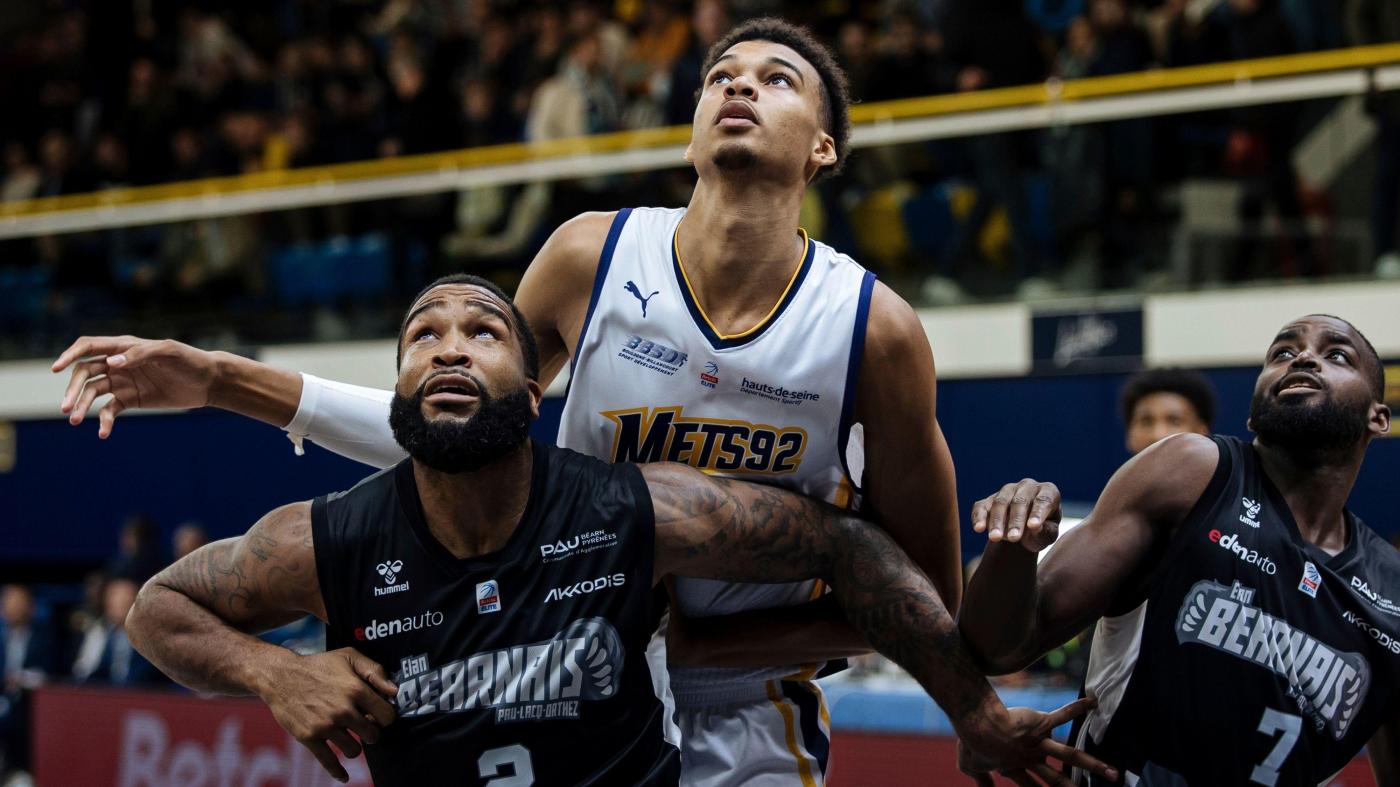 There is no defense played in the NBA draft lottery. And yet with the generational talent of Victor Wenbanyama available in the May 16 drawing, the outcome of the random-but-weighted process for non-playoff teams could impact the Miami Heat’s playoff or championship outlooks for years to come.

The 7-foot-2 ballhandling, playmaking, outside-shooting French big man is viewed as that transcendent.

Put him in the Eastern Conference, and the Heat’s challenge over the next decade could rise to levels arguably heretofore unseen during the Pat Riley era.

Of course, it all depends on where he lands.

(The irony is that for as much as the San Antono Spurs stood as a Heat playoff rival for consecutive NBA Finals, and for as much as the NBA lamented the Spurs landing both David Robinson and Tim Duncan in the lottery, it arguably could be in the Heat’s best interest for Gregg Popovich to again turn his lottery luck into an easy button.)

First, the scout scoffed at any notion of the Heat, if the early struggles continue, moving into tank mode (yes, the Heat hold their own, unprotected first-round pick in the 2023 NBA draft).

So if not here, than what happens if elsewhere?

The scout was asked to assess the addition of Wenbanyama to potential Eastern Conference lottery teams, with a focus on those teams’ young talent that would mature alongside Wenbanyama.

Indiana Pacers (with Tyrese Halburton and Benedict Mathurin in place):

“They might not immediately move to the top with Wenbanyama, but, yes, eventually, I think so. Because you’d have a three-guy nucleus. You’d have your four or five with Victor, wherever he plays. And then you have a very potent scorer. That would be a potent combination with those three guys.

“Yes, another team with a similar shot. Because it’s the same analysis as Indiana. You’ve got a big-time point guard in Cade Cunningham. He’s a piece of a championship team, I think. And Ivey is a major talent. Give them two years and people would start going to downtown Detroit.”

“It’s funny you ask, because one of my themes entering the season was Orlando has sucked forever. But now, with their three frontcourt core guys — Wagner, Banchero, Carter — they finally have a base. But the difference with them is their guard situation is still off. So until they’ve resolved their guard situation and [do] not rely on Markelle Futlz to be their savior, they’re still going to need guards.”

Charlotte Hornets (with LaMelo Ball and ???):

“I would be less concerned if I was the Heat or another team in the East if they got Wenbanyama. They have Ball. But what else do they have? Their second-best player [Miles Bridges] may be out of the league with his legal problems. Gordon Hayward is fading. Is Terry Rozier going to be there? P.J. Washington is a complementary player. So they don’t have the trio.”

“So you have a one, Ball, who I like, and who would probably play well with a big guy like that. You’d have a solid two, LaVine. So you don’t want them to get Wembanyama. But the tread has been on LaVine’s tires for a while, and Ball keeps getting hurt. They’re a little older in terms of their other pieces.”

“They’re loaded and not going to the lottery. But if they slip there, maybe lose in the play-in and get into the lottery, you don’t want Toronto to get him. I could just imagine all the things Nick Nurse would cook up with him and those other guys.”

PRECIOUS CANDOR: The last time the Heat played the Raptors, Toronto coach Nick Nurse was brutally candid pregame about Heat 2020 first-round pick Precious Achiuwa being only a some-of-the-time player with his effort. Then Achiuwa went out and had 18 points and 11 rebounds at FTX Arena. The Heat won’t see Achiuwa on the court Wednesday when they visit Scotiabank Arena, with Achiuwa out with ligament tears in his right ankle. But before Achiuwa went out, Nurse again had effort questions. “I’m always talking about playing hard on D and not executing, and he’s just having too much inconsistency,” Nurse said, according to the Toronto Star. “Some nights he’s unbelievable, he’s into the game and doing it all; some nights he’s not doing very much of it.” The toll for Achiuwa had been minutes. “This 12, 15, 17 minutes is not what I envisioned for him this year,” Nurse said. “I told him that. I’m envisioning more in the mid to upper 20s, plus. But I can’t if he’s not going to execute our stuff defensively better.”

TORONTO TAUNTS: Speaking of Toronto, former Heat guard Goran Dragic hardly made many friends when he was open about wanting to move on from the Raptors after they acquired him in the Heat’s 2021 offseason sign-and-trade for Kyle Lowry. Back in Toronto this past week with the Chicago Bulls, Dragic played along with the jeers, while appreciating it could have been worse. “That’s nothing, the boos,” Dragic told Chicago’s Sun-Times of his days playing in Europe. “I played in Greece. I played in Belgrade. They’re throwing coins, golf balls, lighting fires just because of where I’m from [Slovenia]. That’s a normal environment for us. We were in Croatia, and we had a game against Zadar. The fans came down from the bleachers, and they came after us. We all had to run into a locker room and lock the door. Then they smashed all the windows on our bus, and we had to drive home six hours without showering, with no windows and glass all over.”

ONE MORE TIME: Not only did the NBA’s officiating report confirm that the Sacramento Kings were robbed of a chance for victory a week ago at FTX Arena, when the winning 3-pointer by the Heat’s Tyler Herro was ruled a travel after the fact, but two games later the NBA after-the-fact officiating report said Sacramento was robbed of a 3-shot foul that could have sent Kevin Huerter to the line for tying free throws at the buzzer against the Golden State Warriors. “I just want, at the end of the game, somebody to step up and make the right call,” Kings coach Mike Brown said of his minimalist expectations. “A guy gets hit on the arm shooting a three, that’s a foul. A guy takes six steps, or three, four steps, that’s a travel.” Of the NBA’s last-two-minute officiating reports, Brown said, “Basically all they’ll tell us is they missed the call. But you still lost.”

STILL GOING: Already at his fifth NBA stop at 29, former Heat guard Josh Richardson is continuing to win over teammates, this time with the San Antonio Spurs. “His energy definitely helps us get going around the locker room, on the court,” point guard Tre Jones told San Antonio’s Express-News. “You can always feel him, for sure. He just has a different kind of vibe. It really helps the team. It’s good for our culture.”

2. Times LeBron James has lost to his hometown-area Cleveland Cavaliers. The first time was with the Heat in 2010-11, with it then happening again last Sunday with the Los Angeles Lakers.