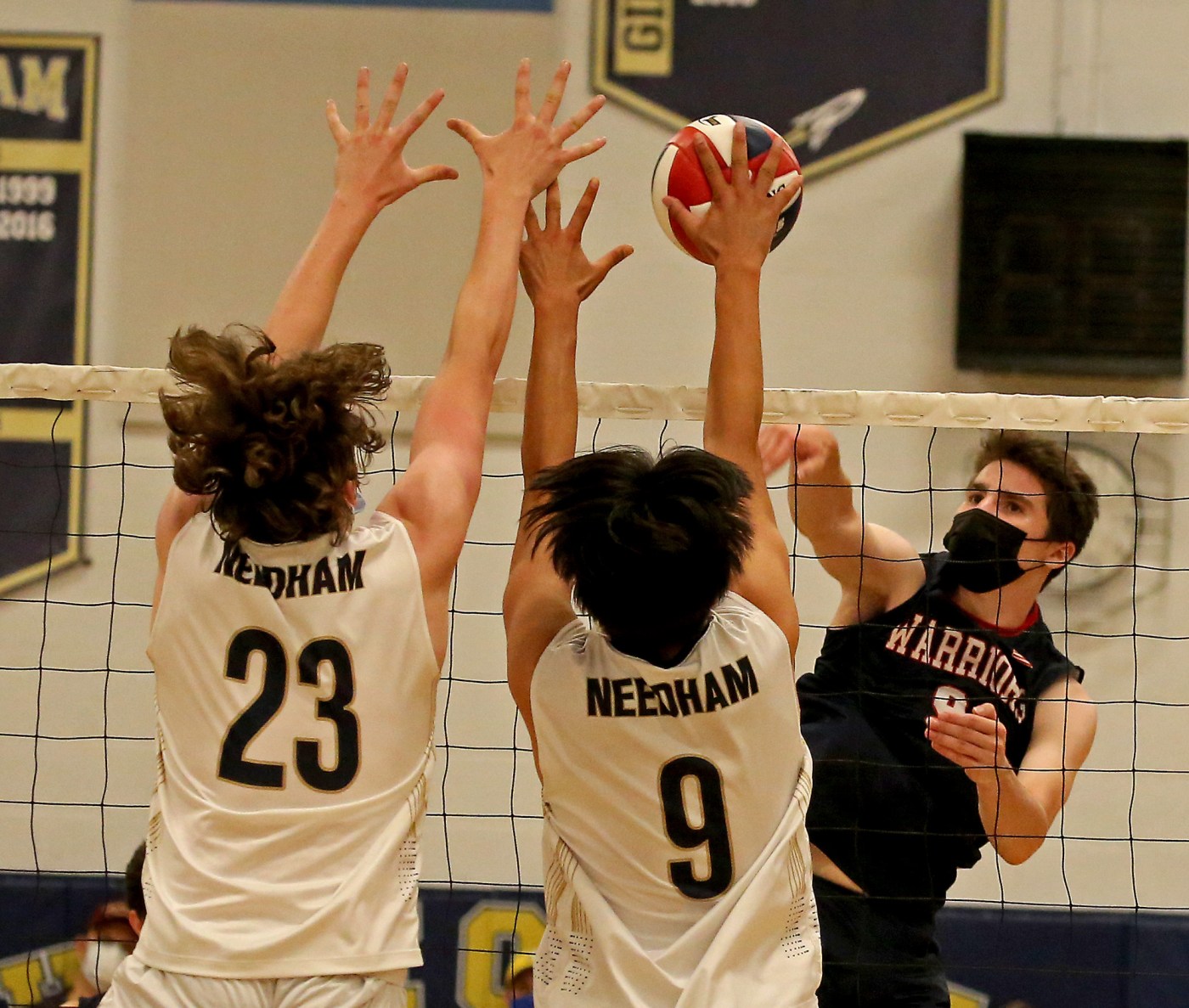 The senior setter orchestrated a balanced attack amid a trip to the Div. 2 state semifinal round. Aragoso tallied 746 assists on his way to a Tri-Valley League MVP award. As a junior, Aragoso helped the Scarlet Hawks reach the Div. 1 Central final. Aragoso finished with 1,144 assists over two seasons.

At 6-foot-4, Barenboym proved to be a terror in a Dual County League All-Star season. The team’s top weapon finished with 269 kills and 203 digs despite missing some time, leading Wayland to a Div. 2 state quarterfinal appearance. The senior is headed to UMass next year.

Braverman closed his high school career in a flourish, picking up 208 kills, 149 digs, 63 aces and 32 blocks. The senior earned Dual County League All-Star honors for the second time, following a junior season in which his Warriors appeared in the Div. 1 state final. He will continue his volleyball career at Stevenson University next year.

Navigating through a tough Merrimack Valley Conference while playing a new position, Chanthaboun starred at outside hitter by averaging 19.6 kills and two blocks for Andover — including a 28-kill performance against Methuen. The senior exits as a member of the National Honor Society, an AP scholar with honors, a National Merit Finalist, and volunteers with Special Olympics and Lahey Clinic. He heads to the Boston College pre-med program.

As one of the many stars on the Div. 1 state champions, Coppinger finished second on the team in blocks and kills per set. The senior followed up a Bay State Conference All-Star nod in basketball with one in volleyball. He’s a National Honors Society member who is heading to Villanova.

Hong was a major catalyst for a Lowell team that reached its first Div. 1 state semifinal this year, leading the squad in kills with 12 per game. His feats earned him Merrimack Valley Conference MVP honors in his second year as a starter for the Red Raiders, and he heads to Rivier University next year to continue his volleyball career.

Jackson doubled up on his Bay State Conference All-Star season last year with another as a senior, posting 286 kills, 45 aces and 446 digs as Natick’s leading player amid a run to the Div. 1 state quarterfinal round. The National Honors Society member finishes his high school career with nearly 500 kills, which he’ll carry with him to the University of New Hampshire’s club team next year.

Just a sophomore, Johnston posted 61 kills on a .413 hitting percentage in the postseason to lead North Quincy to the Div. 2 state final. That played a part in 208 kills on the year, helping the 6-foot-4 underclassmen earn a Southern Alliance All-Star nod. He also enjoys fishing, basketball and soccer, and is also an honor roll student. He’ll play for Smash Volleyball in the off-season.

Kim was a part of one of the most dynamic one-two punches in the state, leading Newton South in kills, digs and kill percentage on the year. The senior exits as a two-year captain, the Human Biomechanics club leader and an honor roll student. He heads to Boston University next year and plans to play for the club team.

One of the centerpieces of Needham’s undefeated stretch over the last two years, Leary gets a second All-Scholastic nod with a second consecutive Div. 1 state title. He led the Rockets in blocks as the team’s emotional leader and Swiss Army knife, also earning another Bay State Conference All-Star selection. The senior heads to Bridgeton Academy for a post-grad year and will play basketball and volleyball.

After missing the playoffs last year, Lexington soared to the Div. 1 state quarterfinal round behind the play of Luciani. The junior notched 16 kills per game with 305 total, pairing well with his three blocks and eight digs per game. His feats helped him earn co-MVP honors in the Middlesex League. He’s an honor roll student and plays club volleyball for Smash, and he hopes to further his career in college.

McCarron had a breakout junior season for the repeat champion Rockets, following his impressive heights on the soccer team by serving as Needham’s second-leading hitter. The National Honors Society member has been a part of three championships at the state and national level. He’s looking to head to a four-year university after graduating in 2023.

Narsjo had a brilliant junior season for O’Bryant, setting a program record for kills in a season with 309. His consistency as a major threat at the net helped him earn Boston City League All-Star honors in a season the team won its first City Championship. He’s an honor roll student and National Honors Society member, and he hopes to go to college in California.

Pham did a whole lot of everything for Brockton as a Southern Alliance All-Star, registering 400 assists, 300 digs, 138 kills and 50 aces. The senior ends his career with over 500 digs and assists, complementing his 4.84 weighted GPA and involvement with the National Honors Society, Classical and Modern Language Society, and constant time playing a variety of types of volleyball. He hopes to become a doctor of radiology, heading to UMass-Lowell for its biomedical engineering program.

Putnam exploded once again as the primary hitter for an unbeatable Needham team. The two-time All-Scholastic was once again a viable threat for 20-plus kills in any match, helping him to a second Bay State Conference selection. With four years of honor roll and a National Honor Society membership, he heads to Ohio State next year to play for one of the top collegiate programs in the country.

The other half of Newton South’s elite hitting tandem was Russell, who created headlines as a UCLA volleyball commit this spring. The two-time All-Scholastic senior was a Dual County League All-Star at 6-foot-5, also leaving high school as a Junior National Club MVP with Smash.

Schorr became the first player in the program’s prestigious history to pass 1,000 career assists as he helped the Eagles to a 20-2 record this season. The Catholic Conference All-Star made the Headmaster’s list, Dean’s list and Principal’s list academically, pairing with a National Honors Society membership and a National Language Honors Society membership. He heads to Boston College next year, but not before competing in Nationals in Las Vegas this month for club.

Schultz was the model of consistency for a Winchester team which made it to the Div. 1 state semifinals, accruing 221 kills, 72 aces, 93 assists, 181 digs as the team’s top outside hitter. The two-time All-Scholastic was co-MVP of the Middlesex League a year after earning the Dual County League MVP award, helping him secure a spot on Lasell University’s volleyball team next year.

Singh proved his status as one of the state’s top setters with 700 assists this season, frequently finding all three of his top weapons to help Westford Academy reach the Div. 1 state final a year after reaching the semifinal round as North champions. The Dual County League All-Star is an honor roll student and will head to Case Western Reserve University next year to join the neuroscience program on a pre-med track.

A two-year starter, Smagula was one of Brookline’s top defenders as a legitimate state contender. The senior libero was a Bay State Conference All-Star, accruing 278 digs for the scrappy Warriors. He’s in the National Honor Society, is a Whipple Writing Fellow and an ARENU Scholarship recipient, helping him prepare to attend Claremont McKenna College in the fall.

Veitas exits his high school career as one of the top hitters in the state, notching 260 kills for a loaded Newton North squad that was hampered with injury and illness all year. The Bay State Conference All-Star was a National Merit Semifinalist, and heads to the mechanical engineering program at the University of California San Diego next year.

Orchestrating a dynamic offense for a second year, Weng once again starred for Needham as its setter with 529 assists — reaching 1,009 career assists as a junior. The two-time All-Scholastic was a Bay State Conference All-Star for a second time before winning his second Div. 1 state title with the Rockets, pairing well with his 3.88 unweighted GPA. He hopes to play collegiate volleyball after he graduates.

At 6-foot-8, Zegowitz was dominant in the middle for Westford Academy as the state’s top middle. His 288 kills and 106 blocks helped the Grey Ghosts reach the Div. 1 state final, and also helped him earn a Dual County League All-Star nod. He was on the USA Volleyball Boys Junior National Championship team with Smash in 2021, and heads to Wentworth next year to play volleyball.