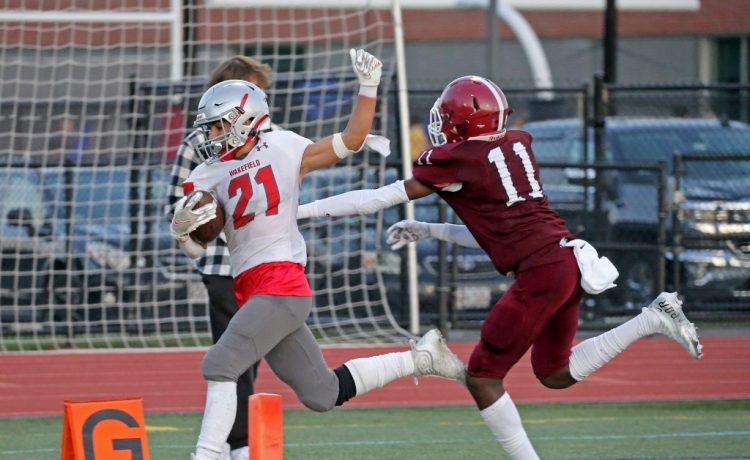 BELMONT – It was a case of the Killer “D’s” for Wakefield on Thursday night against Belmont at Harris Memorial Field.

Bobby DeFeo and Nathan Delgado combined for 287 rushing yards and five touchdowns as the Warriors steamed past Belmont 36-12 to move to 2-0.

“We needed to work on all facets of our game after last week and we were able to do that,” Wakefield coach John Rafferty said. “Belmont has a good team and we knew that we needed to be better.”

DeFeo needed only nine totes to gain 164 yards and score three times. Delgado was the workhorse back as he carried 20 times for 123 yards and two scores while also standing out in the defensive backfield.

Neither team could score in the opening quarter despite each having a drive deep into opposition territory. It was the Warriors who dented the scoreboard first in the second quarter when DeFeo raced 28 yards to the house to cap an 80-yard drive for a 6-0 lead with 7:05 left in the half.

After a Marauders punt, Wakefield needed less than three minutes to increase its lead just before the half. Three runs from Delgado was mixed with three pass completions from Javin Willis to Christian Delgado moved the ball to the Marauders 26, where Nathan Delgado raced to the end zone for a 14-0 lead after a conversion pass.

The Marauders (1-1) had a chance to get on the board on the final drive of the first half thanks to a 23-yard scramble by quarterback Jayden Arno (13-of-19 passing, 181 yards) and a personal foul penalty. But a sack thwarted the scoring chance and Wakefield took its 14-0 lead to the break.

“Bobby and Nathan did a great job of running the ball for us,” Rafferty said.

The Warriors got the second half kick off and drove down field, overcoming a pair of penalties along the way, as Nathan Delgado plunged in from three yards out. He added the conversion rush and it was 22-0 Wakefield.

Belmont didn’t go away, though, as Arno hooked up with Brian Logan on a short hitch pass that the junior turned into a 72-yard scamper down the right sideline to pay dirt, cutting the lead to 16 points with 5:15 left in the third.

The ensuing onside kick was recovered at midfield by the Warriors, who needed three plays and just over a minute to deliver a knockout punch when DeFeo found the end zone from 39 yards out to make it 29-6 after three quarters.

Belmont fought back, thanks mainly to Arno’s legs and right arm, as he engineered a nine-play, 66-yard scoring drive on the next series that he capped with a 3-yard keeper. But it was as close as the Marauders got in the fourth as DeFeo and Delgado churned over six minutes off the clock during a nine play drive. DeFeo’s third score of the game closed things out.

“We certainly can’t be upset getting off to a 2-0 start but we know that we have to keep moving forward,” Rafferty said.