‘We didn’t get it done’ – Boston Herald 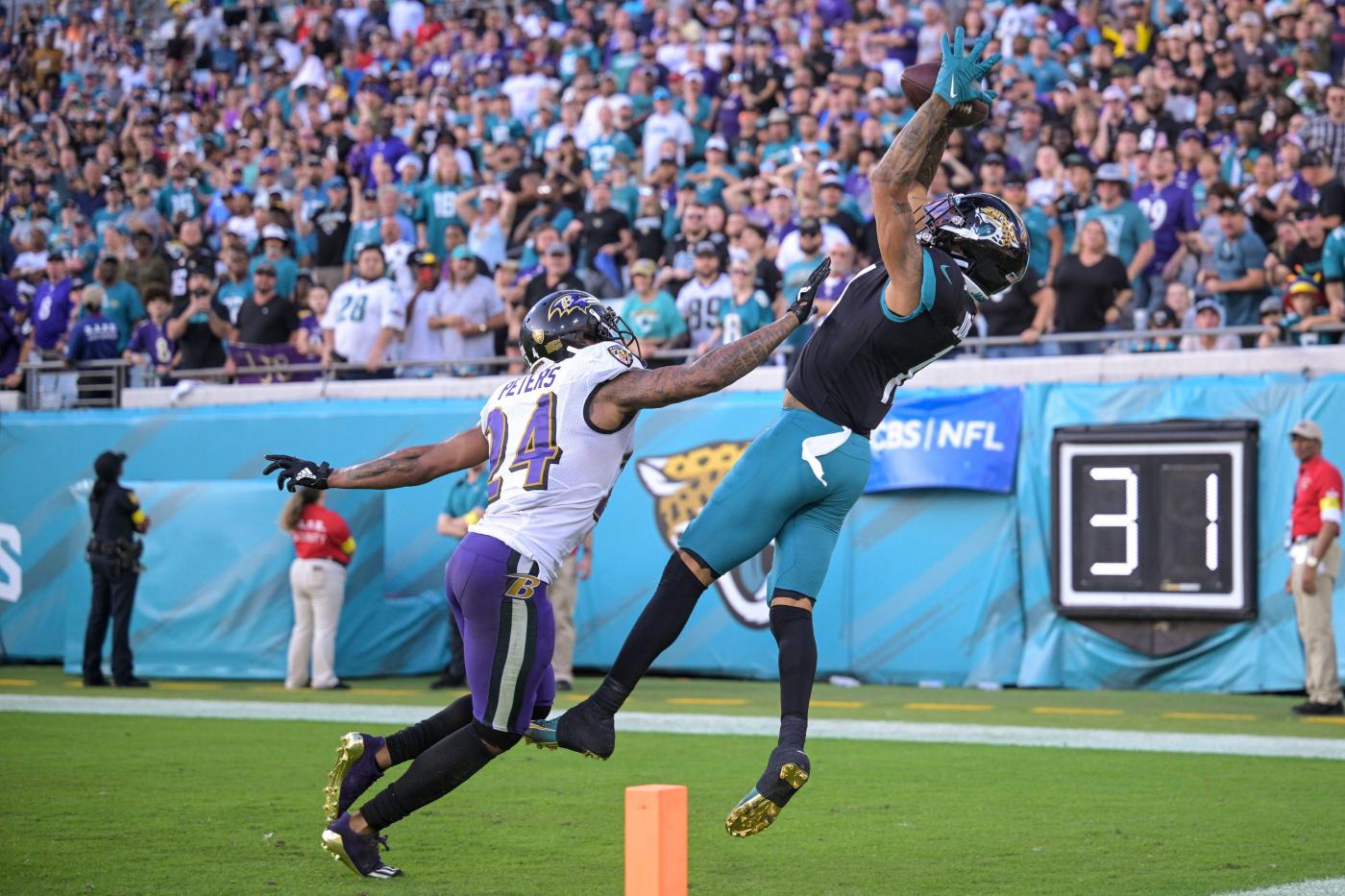 The Ravens are 7-4, their four-game winning streak over, and what went wrong in Week 2 and Week 4 and Week 6 also went wrong here at TIAA Bank Field, a cavalcade of small mistakes blocking their path to something like progress.

The Ravens’ issues Sunday were nothing new: red-zone struggles on offense, questionable clock management, a suddenly disappearing defense. But the manner of this particular defeat — joy and relief turning into pain and suffering in just under two minutes, the squandered opportunities to steal a win back — was especially biting.

With 2:02 remaining, the Ravens led 27-20 and had over a 93% chance of winning, according to ESPN. Quarterback Lamar Jackson’s 12-yard touchdown pass to tight end Josh Oliver had given the defense a simple task: Get a stop and get the win.

It couldn’t. Quarterback Trevor Lawrence led the Jaguars on a 10-play, 75-yard touchdown drive, converting a fourth down early in the march and ending it with a 10-yard strike to wide receiver Marvin Jones. With 18 seconds remaining, Jacksonville (4-7) didn’t settle for overtime. The Jaguars went for the lead, and they took it, Lawrence finding wide receiver Zay Jones on another picture-perfect throw.

“That’s a play I have to make,” said defensive back Brandon Stephens, who was covering Jones on the 2-point conversion. “He made a play. I didn’t.”

That’s what these Ravens losses have come down to. After Justin Tucker missed on a 67-yard field goal attempt as time expired, his kick dying several yards short of the uprights, the Ravens trudged off the field, their shoulders slumped, surrounded by a wall of noise that should’ve been silenced long before.

Afterward, players and coaches accepted responsibility for how Sunday’s game had ended. There was no finger-pointing, at least publicly. It wasn’t for a lack of options, though. On offense, defense and even special teams, there were culprits.

The Ravens rolled up 415 yards and 24 first downs against a poor Jacksonville defense, but they converted just two of their five red-zone trips into touchdowns. They opened the game with drives as far as Jacksonville’s 10- and 11-yard line, but stalled out there, settling for field goals. They opened the second half with a drive to the 5, but no — another field goal.

Every trip inside the Jaguars’ 20 seemed to invite dropped passes and overthrown balls and missed blocks, a recipe for disaster for an already scuffling red-zone offense.

“We got stopped,” Ravens coach John Harbaugh said. “You try to call your best plays. Sometimes you think you can run it in; you run it in [and] it doesn’t work. Sometimes you try to pass it in. We just didn’t do a good job in the red zone, is the bottom line. You go down there and kick, what, four field goals? That’s tough. Those are big trips down there, and obviously touchdowns are what you’re looking for. It’s something we have to improve on going forward. That’s really important for us.”

The Ravens had late-game breakthroughs. Running back Gus Edwards’ 1-yard dive capped a short-field touchdown drive set up by outside linebacker Tyus Bowser’s strip-sack and handed the team a 19-10 lead. Oliver’s catch-and-run score helped the Ravens reclaim their lead late in the fourth quarter after the Jaguars had scored 10 straight points in less than two minutes to go up 20-19. Tight end Mark Andrews’ own successful 2-point conversion extended the Ravens’ cushion from five points to seven.

But that wasn’t enough. Lawrence, as he did all afternoon, went after Ravens cornerbacks Marcus Peters and Stephens in coverage. After opening the game’s decisive drive with an incompletion and a sack, the 2021 No. 1 overall pick completed seven of his next eight passes. He hit top wide receiver Christian Kirk for 16 yards on a third-and-21, then Marvin Jones for 10 yards on the fourth-and-5. Kirk, limited most of the afternoon, got open for a 17-yard gain. Zay Jones grabbed an 8-yarder, then a 29-yarder.

It wouldn’t have mattered if the other Jones, Zay, didn’t separate just far enough from Stephens on an out-breaking route to catch Lawrence’s 2-point fastball in the near corner of the end zone. Lawrence, who’d struggled all year in the red zone, finished 29-for-37 for 321 yards and three touchdown passes. Zay Jones had 11 catches on 14 targets for 145 yards, helping to carry a Jaguars offense that couldn’t run against the Ravens, especially with top running back Travis Etienne sidelined early.

Added defensive lineman Calais Campbell: “To have the game in our hands as a defense, we expect to win that every time. We didn’t get it done. We knew they were talented. They have a lot of playmakers, and they fought hard to make the plays to win the game. We’ve got to go back and watch the tape and figure out how we can improve, but this one definitely stings.”

The Ravens will return home to Baltimore with a winnable game on tap — they welcome the reeling Denver Broncos (3-8) to M&T Bank Stadium on Sunday — but a less favorable playoff path. With the Bengals’ win over the Tennessee Titans on Sunday, the Ravens are now tied atop the AFC North with defending champion Cincinnati. The Ravens have the tiebreaker, courtesy of their Week 5 win in Baltimore, but for how much longer?

If history is any guide, the Ravens’ fourth-quarter troubles aren’t going away. They gave up a 21-point lead against the Miami Dolphins, threw away a chance for a late lead against the Buffalo Bills and coughed up a 10-point margin against the New York Giants. On Sunday, a talented if inconsistent Jacksonville team seemed to find a late-game cheat code.

The Ravens’ offense hasn’t been blameless. Neither has the Ravens’ defense. Said inside linebacker Patrick Queen: “We can’t be a great defense if we can’t stop nobody in the fourth.” And Jackson: “Feels like those early games this year.”

So it’s back to the film, back to the drawing board, back to the team facility in Owings Mills, where the Ravens will try to divine just what’s going wrong in the beginning, middle and end of these should-be wins. They’ve had some time to figure them out. It’s unclear how much more they need.

“You never know how many plays you’re going to get, so you have to make the most of each play,” Stephens said. “Down the stretch in the fourth quarter, they made the plays, and we didn’t. So we just have to get better and close out games.”