Todays Though > News > What could QB Lamar Jackson and the 2022 offense look like? We asked the experts. – Boston Herald
News

What could QB Lamar Jackson and the 2022 offense look like? We asked the experts. – Boston Herald 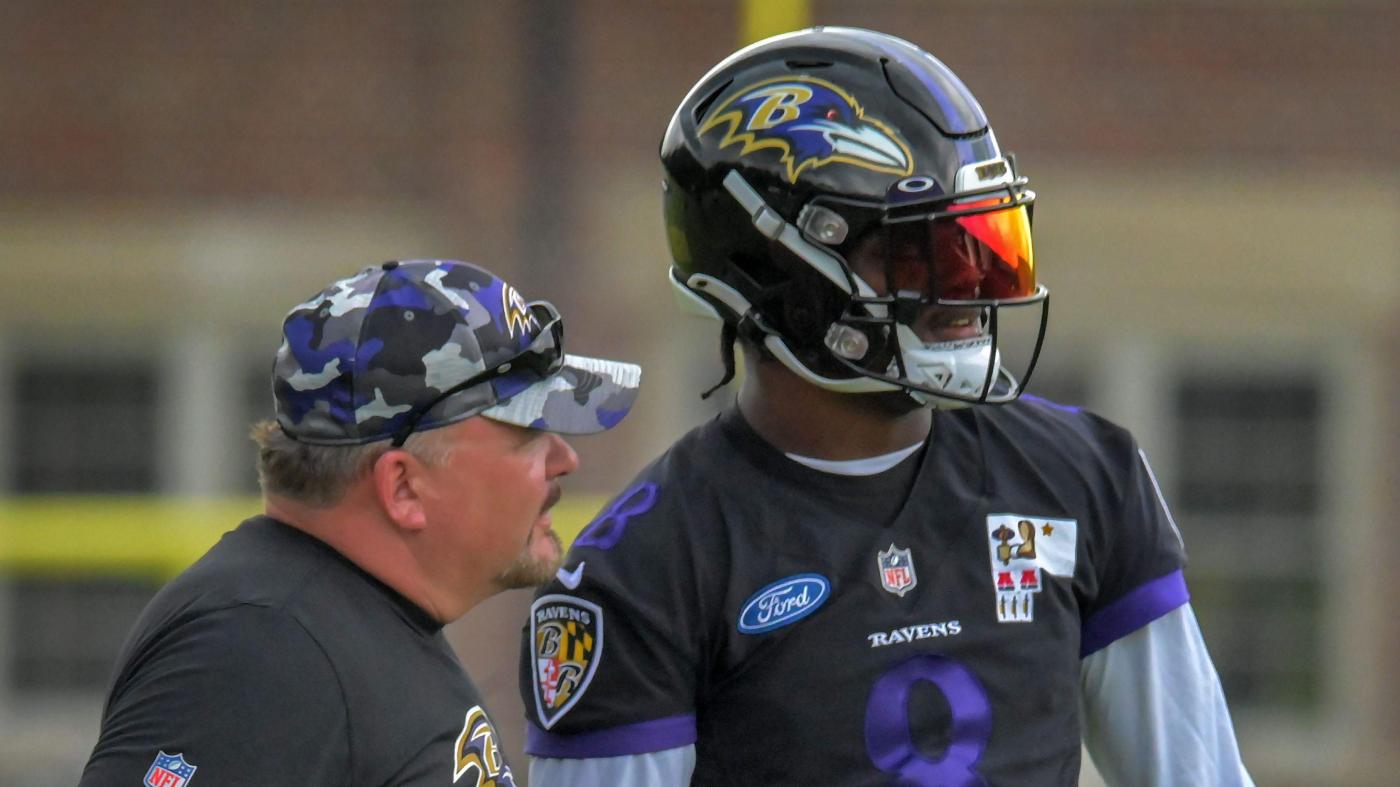 If the most polarizing question in Baltimore sports is about quarterback Lamar Jackson’s value to the Ravens, the most consequential one could be about the 2022 offense he’ll lead.

As the Ravens prepare to face the New York Jets in Sunday’s season opener, the narratives are as inextricable as they are divisive. From week to week, Jackson’s apparent worthiness of a record-breaking deal will rise and fall within the structure of coordinator Greg Roman’s attack. There’s no consensus on how much money Jackson deserves in his next contract extension, just as there’s no consensus on how much the Ravens’ scheme will help or hurt his bid for more.

Not even former NFL quarterbacks can agree. Last month, ESPN analyst Steve Young said Jackson “keeps getting held back by the Ravens year after year because they keep doubling down on this [rushing] thing.” Two weeks later, NBC analyst Chris Simms said Roman is a “phenomenal” coordinator and called criticism of Jackson and the Ravens “over the top.”

The debates will evolve in step with the Ravens’ offense, which could be arriving at a handful of pivot points in the Jackson-Roman partnership. The Baltimore Sun spoke recently with two analysts, ESPN’s Matt Bowen and Football Outsiders’ Derrik Klassen, about what could (and should) be next.

Running in a new direction

In Roman’s three years as offensive coordinator, the Ravens have started two undrafted players and a sixth-round pick at center and still rolled over run defenses. With Matt Skura, Patrick Mekari and Bradley Bozeman in the middle, and Jackson serving as conductor, the team’s ground game has finished first, third and 11th in rushing efficiency over the past three years, according to Football Outsiders.

Injuries could again weigh on the 2022 group’s effectiveness, especially early. The early-season availability of running back J.K. Dobbins (knee) and left tackle Ronnie Stanley (ankle) is unclear, and running back Gus Edwards (knee) has not yet returned to practice. But Simms called Roman “one of the run-game master designers in all of the NFL,” and Tyler Linderbaum, one of the best center prospects in years, should add even more dimensions.

The first-round pick’s influence will be most obvious on the Ravens’ zone schemes. As the Ravens’ play-caller, Roman has typically preferred gap, or power, schemes, in which blockers wall off defenders from the ball carrier’s path and pulling linemen climb upfield to take on linebackers and safeties.

Zone schemes, which ask blockers to move in unison and block either an area or the first defender to arrive in their gap, have been less prominent and less effective in Baltimore. Last year, when the Ravens ran read-option plays, which make defenses account for Jackson as a potential runner, Devonta Freeman had a team-high 14 attempts for 137 yards on zone schemes, according to Sports Info Solutions. No other Ravens running back had more than four carries.

Linderbaum thrived as a zone blocker at Iowa, and his comfort with the concepts should bolster the Ravens’ rushing attack. With more zone-read looks from the pistol and shotgun formations, Roman could also diversify the Ravens’ menu of run-pass-option plays, exploiting overeager defenses with quick hitters.

“Linderbaum is great for this offense because he can play in zone and gap schemes,” Bowen said. “He is incredibly, incredibly talented as a mover, a positional blocker that can cut off defenders on the back side, reach defenders on the front side, play in space and fit up on linebackers. I thought it was an excellent pick. It kind of fits their offensive profile, in terms of the versatility they have on the call sheet and the versatility they have up front.”

Linderbaum doesn’t have the girth of a typical Ravens lineman — at the NFL scouting combine, he measured in at just 6 feet 2, 296 pounds — but his mobility has invited comparisons to Eagles All-Pro center Jason Kelce. In Philadelphia, the similarly sized Kelce has been used on “pin and pull” concepts that get him out in space, almost as a lead blocker.

“[Linderbaum] is such a smart player, he’s so insane athletically, that when you put those second-level players in a bind, if he can climb up there,” Klassen said, “he’s going to clear those dudes out pretty well.”

Last year, though, the offense’s struggles seemed to embolden defenses. Because the Ravens’ patchwork line couldn’t hold off edge rushers for long, because their wide receivers’ route-running occasionally faltered, because Roman often found himself facing third-and-long, because Jackson struggled at times to trust what he was seeing, opponents came after him.

And to great effect. Against five or more pass rushers, Jackson completed just 59.4% of his passes for a meager 6.3 yards per attempt, according to SIS. He was also sacked 19 times and pressured 69 times on those 128 drop-backs. Against the all-out blitzes of Cover 0 looks, he was 6-for-18 for 41 yards. Against man coverage, including scrambles, Jackson’s expected points added per drop-back — a measure of relative efficiency that accounts for situational factors — was the worst in the NFL over the past three seasons among passers with at least 300 attempts.

Bowen said Jackson would have to settle for more quick-hitting, first-level throws, and pointed to the Ravens’ Week 13 loss to the Pittsburgh Steelers, who flustered him with the blitz.

“Pittsburgh really dialed up the pressure against Lamar, right?” he said. “And they got sacks on him. They made him rush some throws. But there were still some throws to be made on that tape. And that’s just really a thing of trusting your offensive line, seeing it fast in the pocket and getting the ball out. Because even if you blitz every time, there are still going to be throws that are available underneath. You throw the quick game, you throw hot [against an overwhelming number of pass rushers], you throw the crosser, you throw the slants. …

“If you’re going to pressure Lamar, you have to contain him. Because if you miss and he gets outside, it’s a touchdown. But if you do contain him, and you force him to throw the ball, it’s just seeing those throws and taking the throws that are available.”

Jackson’s struggles against heavy-pressure looks, according to the analysts, aren’t worrisome over the long term. But Klassen said the Ravens would need to be better prepared for curveballs like the Miami Dolphins’ hair-on-fire approach in their Week 10 upset last season.

Jackson faced 24 defensive back blitzes in that 22-10 loss, according to ESPN — the most any quarterback has faced since 2015 — and he struggled to adjust. Against one of the NFL’s lowest-rated defenses, the Ravens made just two red-zone trips. Klassen said Roman needed better answers in pass protection.

“They just wouldn’t go to any other answer but throwing those quick wide receiver screens,” he said. “And that’s just not a really good way to handle that. It’s a nice way if that’s one of your four or five options to handle it. If that’s the only thing you’re doing, it really sucks. So I’m kind of hoping they just find more protection answers against stuff like that. Because I do think, if Lamar has a fair chance against stuff like Cover 0 and man coverage, just athletically, he’s unbelievable. And I still think he commands the pocket really well and I do think he’s a smart passer. So to me, it’s just a blip, and you hope that Greg Roman learned a lesson.”

Before the draft, the Ravens’ personnel seemed to be trending toward normalcy. In Marquise “Hollywood” Brown, Rashod Bateman and Devin Duvernay, they had a trio of talented, complementary wide receivers who could grow with Jackson. In Mark Andrews, they had one of the league’s best tight ends. There were still unique pieces in place — fullback Patrick Ricard, tight end Nick Boyle — but the Ravens’ talent allocation looked less like it did in 2019 and more like the rest of the NFL’s.

Then the Ravens traded Brown to the Arizona Cardinals for a first-round pick, didn’t draft a replacement wideout and, in fourth-round pick Isaiah Likely, found a potential instant-impact tight end. Suddenly, 2019 didn’t seem too far removed.

This group of Ravens tight ends might not have the depth of blocking talent that the 2019 team did, especially if Boyle can’t recapture his pre-injury form. But Andrews and Ricard have developed as both blockers and receivers in the years since. Likely, meanwhile, could offer more as a downfield target than Hayden Hurst did, thanks in part to his presnap versatility as a receiver.

“When someone says three-tight-end personnel, everyone thinks you’re going to run the ball downhill, right?” Bowen said. “And there is a run-game element to that. But when you draft someone like Isaiah Likely, what we’ve seen him do in the preseason … that gives you multiplicity on offense.

“When you add Likely to Mark Andrews, who’s a top-tier tight end, to someone like a Nick Boyle, now you can go three tight ends and say, ‘What are you going to do defensively to us? Are you going to go big to stop the run game? But with these three tight ends, we can line up and spread. We can line up in any formation you want because they’re versatile players.’ And that gives you a tactical advantage to be able to counter whatever the defense produces on the field.”

Jackson has pushed back on the notion that he’s most dangerous when surrounded by tight ends, but the Ravens could have the NFL’s best collection of them. Andrews broke the Ravens’ single-season receiving record last season. Ricard is a three-time Pro Bowl selection. Likely got Pro Football Focus’ best-ever preseason receiving grade for a tight end. And Boyle remade his body this offseason to better withstand the pounding of the position.

“I do think the Lamar offense is at its best when it does get heavier, it operates out of pistol, it really leans on the running game,” Klassen said. “Because Lamar is truly, in that sense, a one-of-a-kind player. And I think when you have a player like that, you kind of need to lean into the idea of ‘Styles make a fight.’ And there’s just nobody like Lamar, and there’s nobody that can run this kind of offense. So I think you kind of lean into it.”