Todays Though > News > What does Justin Fields truly have to gain from playing in the Chicago Bears preseason finale? Looking at the pros and cons. – Boston Herald
News

What does Justin Fields truly have to gain from playing in the Chicago Bears preseason finale? Looking at the pros and cons. – Boston Herald 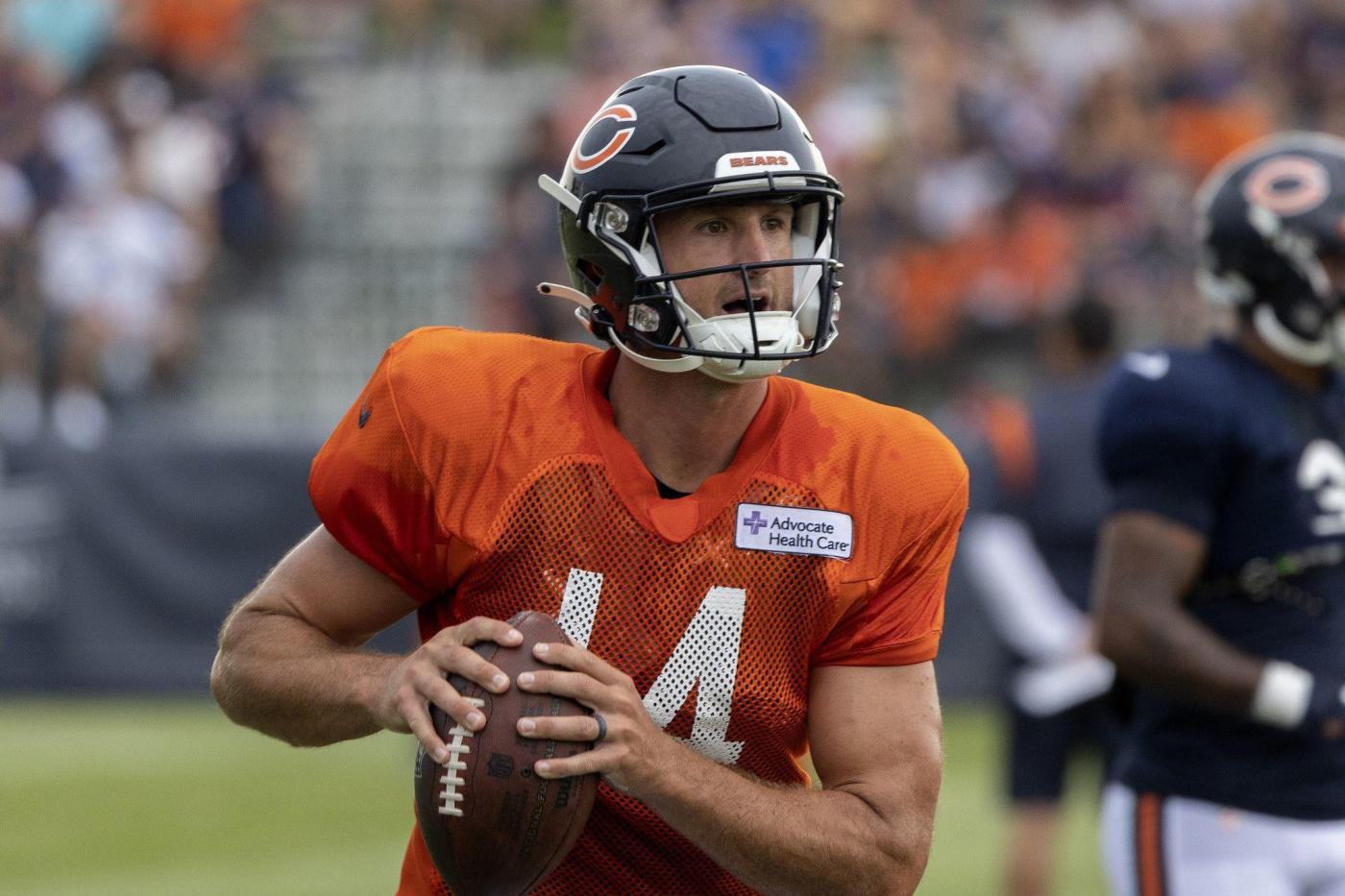 Quarterback Justin Fields will get one more opportunity under the lights in the preseason to add polish to the Chicago Bears offense. Coach Matt Ebeflus announced Tuesday that Bears starters will play the first half Saturday against the Browns in Cleveland. That means Fields and the healthy members of the first-unit offense should see their most extensive game action of the month at FirstEnergy Stadium.

So how valuable will those reps be for Fields and the offense? What are the risks involved of allowing starters and key regulars to play more than two dozen snaps in an exhibition game? And just what should be made of Fields’ performance and productivity over the last four weeks of training camp?

Dan Wiederer: I may be in the minority here, but I am 100% behind Flus’ decision to play his starters for a full half Saturday.

For one thing, the quirks of this year’s preseason schedule left the Bears with that unfortunate short week between their first and second exhibitions, which in turn limited how much the coaching staff was willing to play its top players in Seattle. That left Fields and the first-unit offense with only nine snaps against the Seahawks. Add those onto the 18 Fields played Aug. 13 against the Kansas City Chiefs and that’s not nearly enough August playing time for a mostly inexperienced group learning a new offense with a still unstable offensive line and a mostly unproven pack of receivers.

This group needs to build much more momentum and confidence before Week 1. Fields needs to continue developing his timing and pocket presence. The offensive line needs more work to continue jelling. The best way to get those things is with game action against an unfamiliar defense — even with the obvious injury risks involved.

So turn them loose Saturday night. This is mostly a developmental season to begin with. So why press the pause button on the development?

Colleen Kane: It’s a good idea in theory. But if any key player is injured in the first half, there’s going to be a whole lot of second guessing of Eberflus’ decision.

The Bears already are short on offensive talent because of injuries to wide receivers Byron Pringle and N’Keal Harry, among others. Shouldn’t the trainers keep Darnell Mooney and Cole Kmet in bubble wrap on the sideline? Do Bears coaches need to rewatch film of Myles Garrett and company pummeling Fields for nine sacks last season as a reminder for caution?

Honestly, I’m just playing the contrarian. I’m also of the opinion that the offense stands to gain quite a bit from playing a full half together — especially an offensive line that could have three fairly inexperienced starters. (And it’s probably worth the risk in a season that is all about Fields’ growth.)

But the fact that it’s a preseason game is likely to make it even more anxiety-inducing for fans every time Fields takes a hit.

Wiederer: Listen, I understand the worry. I also understand the urgency at Halas Hall for the offense to find a rhythm that gives the coaching staff a little more relaxation and maybe allows them to get a few extra winks of shut-eye before that Sept. 11 season opener against the San Francisco 49ers.

You’ve seen what I’ve seen over the first 20 practices of the preseason: a Bears offense that is clunky and inconsistent with a second-year quarterback who needs to generate noticeable momentum as soon as possible.

This isn’t Mitch Trubisky in August 2019, mind you. I don’t get the sense Fields is losing confidence or becoming mentally taxed by the offense’s current struggles. So any anxiety to that end should be quelled.

But I also haven’t seen nearly enough “Wow!” moments from Fields during training camp or evidence that a major breakthrough is imminent. And I am also being realistic with where Fields is at this stage of his development, especially with his pocket presence.

Coordinator Luke Getsy and quarterbacks coach Andrew Janocko push Fields to clean up his footwork and gain an increased understanding of the timing of each play. They have encouraged him to understand his gifts as a runner and Getsy continues utilizing concepts that will help get Fields on the move.

But they also want their young quarterback to understand how to play high-level winning football from within the pocket, which requires patience and a feel for how to climb the pocket and find clean areas to throw from. That also requires experience, which is what Saturday will help provide.

Kane: Absolutely, the more experience the better for Fields, and that should include some action against the Browns’ first-team defense. Browns coach Kevin Stefanski announced Thursday starters would play, though he declined to say how many plays he expected to keep them in.

Along with all the work Fields can get in, wide receiver Equanimeous St. Brown said Wednesday the extended outing could give the offense a chance to operate when feeling fatigued and also to get in some 2-minute work against another team. That’s an opportunity for Fields to continue to develop chemistry with some of the new receivers, including St. Brown.

It also could give Fields a chance to build confidence as he heads toward the season opener. I agree Fields doesn’t seem to be rattled by the offense’s ups and downs over the first few month of training camp. He has an even-keeled personality to begin with, and coaches have talked about how they try to set the right tone between acknowledging the development that is taking place and demanding a high standard.

But it certainly wouldn’t hurt to lead a touchdown drive after the first-team offense punted on their three drives against the Chiefs and ended with a field goal on their only series against the Seahawks.

Wiederer: Terrific point. I wasn’t a math major but a 0.75 points per possession average — which is what the Fields-led offense has produced with limited preseason work — isn’t going to cut it for a starting quarterback at any level. And as we both know, production is the match that lights the wick for confidence. So let’s see this offense be at least modestly productive Saturday with hopes for a confidence carryover into the regular season.

If the last 20 practices are any indication, though, Bears fans should also ready themselves for the “tuck and run” experience with Fields, which at times will turn discombobulated plays into positive yards and first downs, inducing couch high-fives. But at other times, Fields’ scrambling decisions will be indicators that his pocket poise and trust in those around him isn’t yet where it needs to be. That’s a tightrope the 23-year-old quarterback must walk skillfully.

Earlier this month, there was one practice in which Fields had several sequences in which he made on-the-run shovel passes or option-like tosses to safety valve receivers as he scrambled. At times, those plays will wow the fans and move the chains. At other times, they will put the football in danger and become examples of questionable decision making. I asked Eberflus how he’ll oversee that part of Fields’ development, allowing for natural creativity while also coaching caution.

“We are certainly in conversation about that,” Eberflus acknowledged.

Bears coaches ultimately want Fields to play with feel and to use his instincts to extend plays when he needs to. In Eberflus’ words, sometimes that will mean Fields will “ride the pocket and deliver the pass.” Sometimes he’ll need to dart forward through the B gap and escape pressure. Sometimes he’ll scramble with the option to either continue running or find a target downfield. It should all be instinctual. Eventually. That’s worth keeping an eye on.

Kane: Much of that, of course, also will be affected this season by the play around Fields from an unproven offensive line and a patchwork cast of receivers.

So this game Saturday night also will be about getting more work for left tackle Braxton Jones, the fifth-round pick making the massive jump from FCS Southern Utah to the NFL, and Teven Jenkins, whose tenure at right guard is 1½ weeks old. The Bears have placed their bets on several young players to protect Fields, so even if it’s not ideal that some are still getting their feet wet Saturday, it’s the decision the team has made.

Jones was asked Wednesday whether Fields mentioned anything about his last outing in Cleveland, his first career start in which a different Bears offensive line didn’t do Fields many favors as the Browns totaled 15 quarterback hits and those aforementioned nine sacks.

“He hasn’t said anything about that, which I’m glad,” Jones said. “I mean, that was last year. We’ve got a different group of guys and obviously we’re looking for a better outcome.”

Wiederer: “We’re looking for a better outcome.” At least Braxton, who has only been with the Bears since April, has quickly learned the 21st century motto at Halas Hall, right? Now the Bears have to turn that looking into finding.

As everyone agrees, so much of the success of the 2022 season will be judged by how much growth Fields makes. And to that end, the Bears must continue making daily efforts to ensure Fields is comfortable and confident and ultimately productive when it matters.

We all know he needs more help around him — on the line and in the receiving corps specifically. But he also needs to continue gaining experience and learning how he can be most successful and what his weaknesses are. That process is still in the very early stages. But it’s progressing. And the progression will continue this weekend.