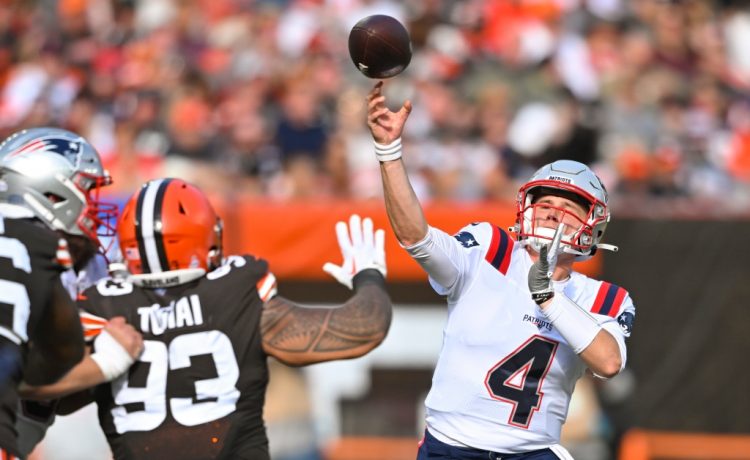 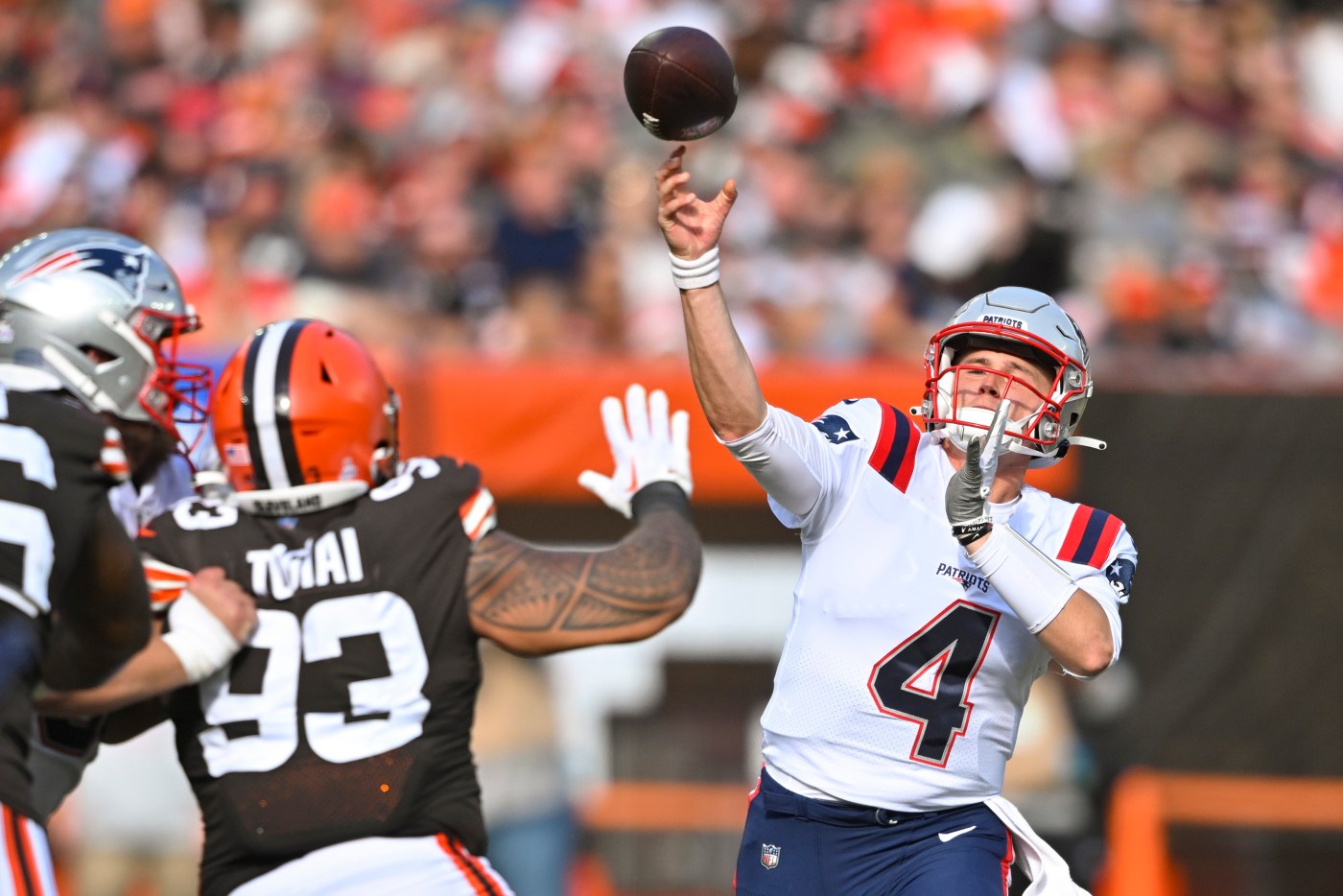 In a fever state, it’s easy to forget the details.

The Patriots game-planned to bully and fool the Browns, whose defense is both undersized and overaggressive. Initially, they failed.

Running the ball behind six offensive linemen inspired only a 1.6 yards per carry average through three quarters and a surge of goal-line courage from Cleveland. The Browns halted the Patriots’ opening drive with two run stuffs at the 1-yard line before surviving a play-action pass on third down. During and after that possession, the Pats emptied most of their misdirection clip.

Matt Patricia called a season-high six screens, including two on his first series. He dialed up multiple end-arounds and reverse pivot hand-offs on under-center runs to catch Cleveland out of position. (On those plays, Zappe stepped back in the opposite direction of the run before turning 180 degrees to hand the ball to Rhamondre Stevenson.)

Yet all that deception and planning produced midway through the second quarter was just a 3-3 tie. So, Patricia pivoted from Plans A and B to Zappe.

He called four straight passes to open the Patriots’ next possession, all completions that totaled 48 yards. The Pats eventually scored on another tendency breaker, with Stevenson rushing 31 yards to the end zone on their first shotgun run of the game.

To open the third quarter, Zappe hit two more passes for 66 total yards that dropped the Patriots at Cleveland’s 2-yard line. After a stuffed run on first down, Patricia adjusted with back-to-back passes that asked Zappe to find a crack in the Browns’ suddenly impenetrable goal-line defense. He delivered, finding fellow rookie Tyquan Thornton on his second read for a 2-yard touchdown.

A couple drives later, after the Pats’ run rate soared to 90% when under center, Plans A, B and C finally came together for a knockout blow. On third-and-1, Zappe stood close to the line, surrounded by an extra offensive lineman and two tight ends. Dropping back, he whipped out a play-action fake.

Then Zappe settled into a wide pocket and zipped an easy throw left to Hunter Henry, who had no company until he was celebrating in the end zone. It didn’t matter the Patriots would score two more touchdowns in the fourth quarter, one on a jet sweep and the other riding Stevenson through traffic. Their offense found its best self through the rookie, right then and there.

This was no ground-and-pound attack, nor Shanahan system knockoff. The Pats were shapeshifters again, week to week and drive to drive; an offense designed to maximize its talent with no loyalty to a specific scheme or style of play.

Sunday in Cleveland was littered with examples: from Jonnu Smith’s 53-yard, tackle-breaking catch-and-run to DeVante Parker’s physical slant catches and sideline jump ball and Stevenson charging hard between the tackles all day long. The best thing Zappe did was distribute. He played point guard.

According to Pro Football Focus, almost 60% of Zappe’s passing yards were gained after the catch, a number that might seem to discredit his performance, but instead highlights how he brought a sensible game plan and terrific adjustments to life.

Of course, more will be required of the Patriots than solid game plans and clever play-calls to overcome elite defenses. That is what Mac Jones is for. Compared to Zappe, Jones is still the superior and more talented quarterback; one who obviously failed to play point guard when he led the AFC in interceptions through Week 3.

Until Zappe proves otherwise, Jones is only passer on the roster who’s flashed the potential to elevate his surrounding talent with elite accuracy or processing; a prerequisite for beating great teams. That cements Jones as the Patriots’ best option under center for the future, provided he can first follow Zappe’s lead and get back to basics.

Here’s what else film revealed about Sunday’s win:

Notes: The most eye-popping numbers here are against the blitz.

Zappe identified extra rushers expertly and never fell victim to Cleveland’s pressure. In fact, he scared the Browns out of blitzing early in the second half. Otherwise, virtually all of his downfield targets were open, though Zappe also showed good patience within the pocket and let plays develop instead of darting out at the first hint of pressure, real or anticipated.

He became the only rookie quarterback in the Super Bowl era to post a passer rating higher than 100 in each of his first two starts.

Dugger pocketed a team-high eight tackles and two pass deflections, including an interception he grabbed on a play the Patriots hadn’t prepared for in practice.

Onwenu has a strong case for the Patriots’ best offensive player this season. In the meantime, he’s played four straight games without surrendering a single pressure, including Sunday when he also run-blocked his butt off.

A weekly staple in the studs column, Wise overcame iffy run defense in the first quarter to record one sack, three hurries and two other QB hits. Not a bad day at the office.

Another week, another benching for Wynn, who returned in the second half. He allowed a sack and committed yet another penalty, his eighth on the year, a team worst.

Even accounting for his impossible task of blocking All-Pro Myles Garrett for four quarters, Brown was flagged for holding and a false start and at fault on a sack.

#Patriots film: Kyle Dugger was a beast Sunday, and he did everything. Ev-ery-thing.

A sample: back-to-back plays where he bulldozed Kareem Hunt in blitz pickup and then obliterated a short crosser. pic.twitter.com/4rJ9wxXrrn

Patriots rookies rise to the challenge