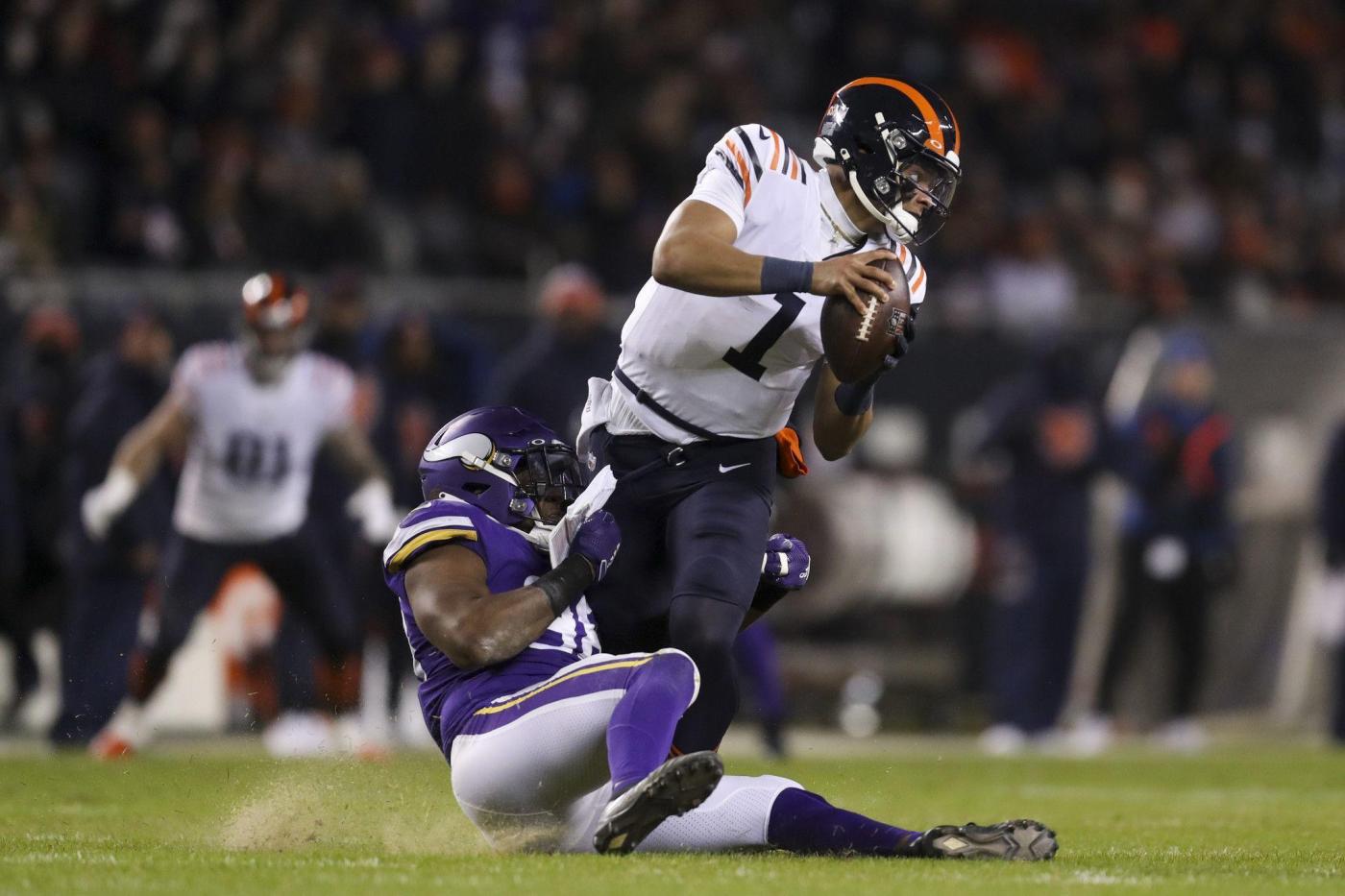 Can we talk for a second about the final play of the first half in the Chicago Bears’ 41-10 loss to the Detroit Lions on Sunday? Can we try to wrap our arms around that clumsy sequence, which became another missed opportunity on an afternoon filled with them? What exactly were the Bears hoping to get done? And what went haywire?

In the final two minutes of the half with the Lions driving, Bears coach Matt Eberflus hoped first for his defense to get a stop, then aimed to get the ball back for a final possession. Eberflus used all three of his timeouts in an eight-second span, and the Lions faced third-and-6 from the Bears 9-yard line with 1 minute, 5 seconds remaining.

The Bears defense stiffened, with Kyler Gordon tackling wide receiver Josh Reynolds a yard short of the line to gain. But Reynolds was taken down inbounds, which allowed the Lions to run the clock down to 20 seconds before taking a timeout to set up Michael Badgley’s 23-yard field goal.

With 17 seconds left, the Bears gave rookie kick returner Velus Jones a green light and were rewarded when Jones brought the ball out of the end zone, hit a crease and went 63 yards into Lions territory.

Seven seconds remaining, ball at the Detroit 45. With no timeouts, the Bears dialed up a sideline play designed to get into field-goal range for kicker Cairo Santos.

The Lions, understandably, chose to rush nobody, kept a top on their defense and defended the boundaries. “We would have done the same thing,” Eberflus said.

Somehow, the Bears were discombobulated. There was alignment confusion before the snap with tight end Cole Kmet motioning in from the left, then going back outside to get set between David Montgomery and Byron Pringle. After the snap, all five potential pass catchers seemed to move in slow motion. Nothing seemed in sync.

Eventually, quarterback Justin Fields saw Pringle crossing from left to right about 10 yards beyond the line of scrimmage and tried to hit him. But defensive end Aidan Hutchinson, who was 8 yards downfield and right in front of the Lions bench before the snap, jumped in front of the pass for an easy interception.

So what exactly was going on? Here’s what four Bears players said immediately after the game.

Fields: “That was a call-it-and-run-it play. We didn’t expect that look.”

Pringle: “We were doing whatever we could to put some points on the board. … They had some good defense called there. I thought (Hutchinson) came off the sideline to be honest. They were well-prepared.”

Center Sam Mustipher: “Their whole defense just dropped into coverage and it felt like they had one guy spying Justin. We were just trying to build a wall for Justin. I can’t give away the details of the scheme there. But once they dropped all 11 guys back, it’s hard to do anything.”

On Monday, Eberflus had a more straightforward judgment of that play.

“We just didn’t execute the play and ended up throwing the ball into harm’s way,” he said.

For a team that prides itself on being situationally sharp and devotes extra time to end-of-half and end-of-game scenarios, the collective malfunction on that play was disappointing and prevented the Bears from at least trying a field goal. To become a successful team, the Bears have to become much more adept at seizing such opportunities.

“To be honest with you, I should have just thrown the ball away,” Fields said. “I don’t know why I did that.”

Maybe the most telling play of a woeful offensive performance came in the fourth quarter, when both Bears offensive tackles were called for holding and Fields still was sacked for a 10-yard loss. That was the seventh and final sack for a Lions defense that came in averaging two sacks per game and had posted more than three in only three of their first 15 games.

Detroit’s fifth sack of the first half proved most momentous, though: a James Houston strip-sack on Fields with 3:02 remaining.

The Bears were in a personnel grouping with two tight ends and one running back in to protect and only two receivers out in pattern. It was a calculated deep-shot opportunity against a nine-man box with receiver Dante Pettis breaking open long. But for whatever reason, after Fields carried out his play fake and hit the top of his drop, he didn’t pull the trigger.

In the moment and again after reviewing the video, Eberflus felt like Fields had Pettis open.

“We did think we had a chance to throw it down the field there,” Eberflus said.

Even after Fields hesitated, he had an opportunity to salvage the play. But as he escaped the pocket and began to scramble, he never saw Houston detaching from a double team in the backfield and bearing down in pursuit.

Fields was too casual in trying to set up a juke on linebacker Malcolm Rodriguez and way too careless as he held out the football in his right hand. At the line of scrimmage, Houston hatcheted the ball from Fields’ hand.

“He only had one hand on the ball at that time and he got it stripped,” Eberflus said. “We’ve got to do better there.”

Hutchinson recovered and the Lions converted that turnover into a field goal that gave them a 24-10 halftime lead.

After scoring on their first two drives, the Bears went scoreless on their final 10, managing just 80 net yards and five first downs on those possessions.

The Bears offensive line was shaky for much of the afternoon. Starting right guard Teven Jenkins aggravated a neck injury on the opening drive and left after just seven snaps. Michael Schofield replaced Jenkins for 16 snaps but suffered a knee injury in the second quarter when Houston’s bull rush sent left tackle Braxton Jones tumbling into Schofield on a play that resulted in an 8-yard sack of Fields. Schofield, too, was done for the day.

Dieter Eiselen became the third right guard of the first half and played the final 29 offensive snaps in a game in which the Bears’ pass protection left a lot to be desired.

Still, of the seven times Fields was sacked, an argument could be made that the offensive line was not primarily responsible for four as Fields fell back into a bad habit of holding the ball too long.

“Sometimes on first downs, I’m getting pressure and trying to make something out of nothing and I’m taking a sack for 6 or 7 yards,” he said. “Now it’s second-and-15. I can’t do that.”

Most notable was the Lions’ penultimate sack on a first-down play late in the third quarter. Fields had a clean pocket and all day to scan the field. He never saw anything he liked, however, and kept waiting for something to pop open.

Eight seconds passed from the time Fields took the snap to when he was hit by Houston. The Lions rookie started that play by dropping into coverage but then noticed Fields wasn’t getting rid of the ball or running and came rocketing in to put a big hit on the quarterback for a 9-yard loss.

Once again, the Bears were behind the chains, facing second-and-19 deep in their territory. That ended up one of five three-and-out drives in the second half.

It was one of those days. On 12 possessions, the Bears averaged 1.4 yards on their first play.

Furthermore, during a game in which all six of the Bears’ second-half possessions came while trailing by at least three scores, the offense managed only 50 total yards and three first downs.

In a scenario in which stat-padding passing yards should have been available like fun-sized candy bars on Halloween, the Bears finished with 30 net passing yards. Fields completed just 7 of 21 passes for 75 yards. That marked the second time the Bears had been held below 100 gross passing yards this season. Fields threw for 70 yards in the Week 2 loss to the Green Bay Packers.

Before this season, the Bears hadn’t been held below 100 gross passing yards since Week 3 of 2015, the infamous Jimmy Clausen game in which the Bears punted on all 10 possessions in a 26-0 road loss to the Seattle Seahawks. Clausen went 9-for-17 for 63 yards that afternoon.

With apologies to Fields’ 60-yard scramble in the first half, the coolest play the offense ran was the third-and-1 gadget play from near midfield on the opening drive.

In a short-yardage situation, Kmet motioned from the right of the formation and lined up under Mustipher for an apparent sneak like the Bears ran successfully in Week 9 against the Miami Dolphins. But with a new wrinkle, Kmet took the snap and pitched to Fields in the backfield.

With left tackle Jones clearing out cornerback Jeff Okudah and Montgomery serving as a lead blocker to take care of safety Ifeatu Melifonwu, Fields found a crease and rocketed for 31 yards and a key first down that kept the Bears’ only touchdown drive rolling.

“We were happy we finally got our opportunity to call that,” Kmet said. “Luke (Getsy) wanted to get that off the script and see how it looked. And when we got into that short-yardage situation, we knew it was coming. … Justin made it work out really well.”

Fields had his fourth career 100-yard rushing day by the end of the first quarter and finished with 132 yards on 10 attempts. He’s up to 1,143 rushing yards for the season and, if he plays Sunday against the Minnesota Vikings, in striking distance of Lamar Jackson’s single-season rushing record for quarterbacks, a mark of 1,206 set in 2019.

Fields needs 64 yards to break the record and has averaged 94.9 over his last 10 starts.

“That would be amazing to be part of something like that,” Velus Jones said Monday. “I’d be so happy for him.”