Todays Though > News > What’s happening this MLB offseason? A look at the moves made so far in the AL and NL Central. – Boston Herald
News

What’s happening this MLB offseason? A look at the moves made so far in the AL and NL Central. – Boston Herald 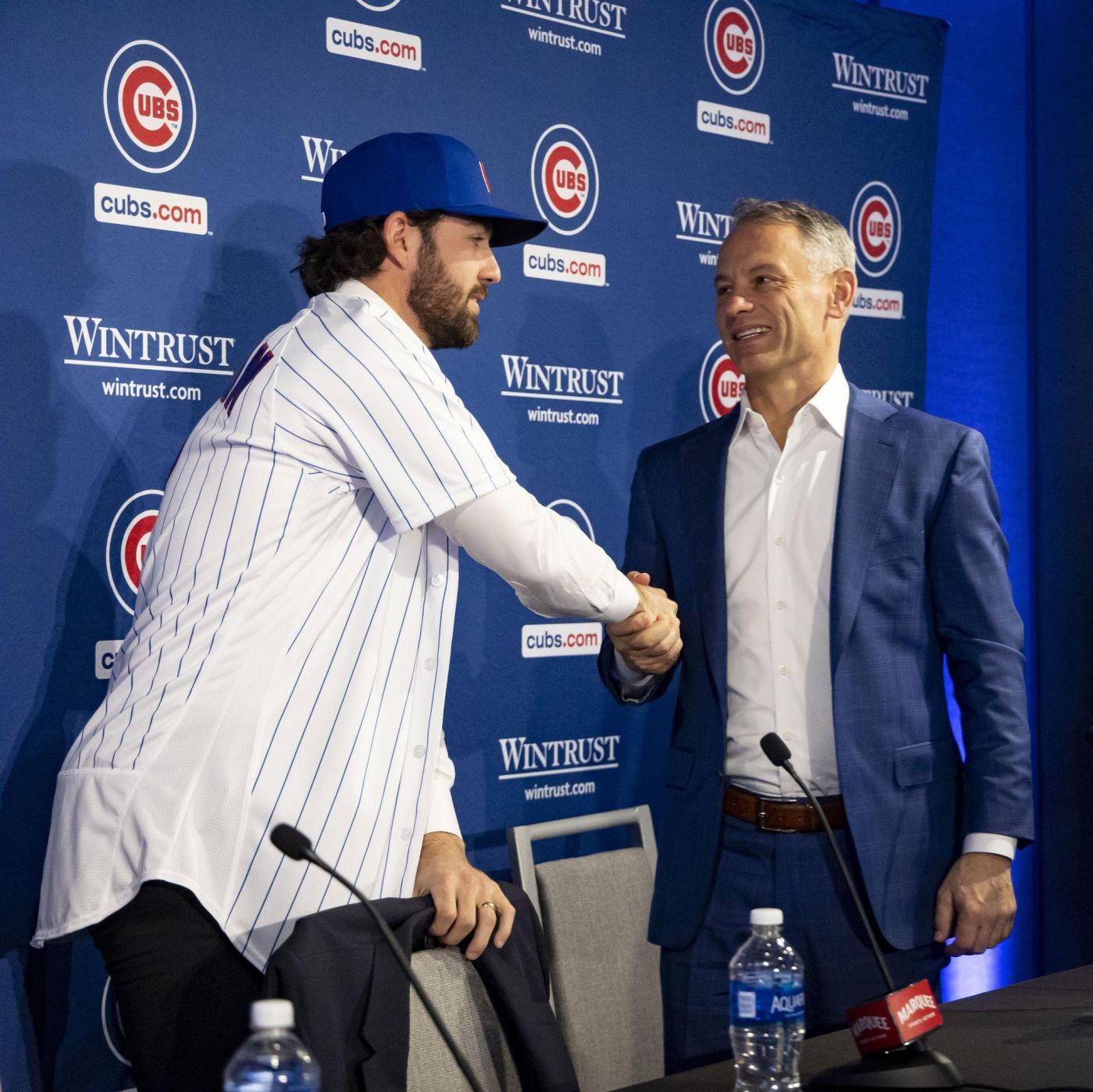 The Cubs found their shortstop in Dansby Swanson. The White Sox added an All-Star to their outfield in Andrew Benintendi.

That’s just some of the activity during Major League Baseball’s offseason.

The chatter and deals were missing for a portion of the lead-up to the 2022 season, with the lockout dominating discussion. This offseason has witnessed a return of hot stove staples such as speculation, trades and signings.

Here are some of the moves for teams in the American League and National League Central divisions.

The Sox addressed their most immediate need when they introduced Pedro Grifol as the manager on Nov. 3. Grifol spent the previous 10 seasons in various roles with the Kansas City Royals, including serving as the bench coach from 2020-22.

He’ll try to lead the Sox to a rebound after they missed the playoffs and finished second in the division with an 81-81 record.

And Grifol has a player he coached in Kansas City to help him after Benintendi agreed to a five-year, $75 million deal — physical pending — on Dec. 16. It’s the largest contract in franchise history in terms of overall value. The outfielder slashed .304/.373/.399 with 23 doubles, five homers and 51 RBIs in 126 games for the Royals and New York Yankees during an All-Star season in 2022.

The Sox filled an opening in the rotation on Dec. 4, announcing the signing of Mike Clevinger to a one-year, $12 million contract. The right-hander, who pitched for Cleveland from 2016-20 before being traded to San Diego, went 7-7 with a 4.33 ERA for the Padres last season after missing 2021 while recovering from Tommy John surgery.

Change is coming to the infield after longtime first baseman José Abreu signed a three-year deal with the Houston Astros. Abreu ranks in the top 10 in several of the team’s all-time offensive categories.

The Guardians were reportedly one of the teams pursuing Abreu, but they found their answer at first base by signing Josh Bell to a two-year deal — which includes a player opt-out after 2023 — on Dec. 12.

Bell hit a combined .266 with 29 doubles, 17 home runs and 71 RBIs in 156 games for the Washington Nationals and Padres. He earned a Silver Slugger Award at designated hitter.

He’ll try to help the Guardians return to the postseason. Cleveland won the division in 2022 — finishing 11 games ahead of the second-place Sox at 92-70. The Guardians defeated the Tampa Bay Rays in an AL wild-card series before falling to the Yankees in a divisional series.

The Guardians reportedly were among the teams interested in catcher Sean Murphy, whom the Oakland Athletics dealt to the Atlanta Braves. Instead they signed catcher Mike Zunino to a one-year deal on Dec. 15. An All-Star in 2021, Zunino was limited to 36 games with the Rays in 2022 because of a left shoulder injury.

The Tigers were a disappointing fourth in the division (66-96), one game ahead of the last-place Royals.

They turned to a familiar arm to aid the rotation, signing Matthew Boyd to a one-year deal on Dec. 14. The left-hander spent six-plus seasons in Detroit (2015-21). He had a 1.35 ERA in 10 relief appearances with the Seattle Mariners in 2022.

More pitching arrived on Dec. 20 when the Tigers signed Michael Lorenzen to a one-year contract. He was 8-6 with a 4.24 ERA in 18 starts last season for the Los Angeles Angels.

The Tigers traded reliever Joe Jiménez to the Braves for minor-league infielder/outfielder Justyn-Henry Malloy and minor-league pitcher Jake Higginbotham on Dec. 8. Third baseman Jeimer Candelario, who spent parts of the last six seasons with the Tigers, signed a one-year deal with the Nationals on Nov. 29.

The Royals finished last in the division (65-97) and made a managerial change, hiring Matt Quatraro. He spent the last five seasons with the Rays, serving as the third base coach in 2018 and the next four seasons as the bench coach.

The Royals signed former Rays pitcher Ryan Yarbrough to a one-year deal on Dec. 13. The left-hander went 3-8 with a 4.50 ERA in 20 outings (nine starts) last season. He had stints on the injured list from April 8-May 2 (left groin tightness) and from Sept. 23 through the end of the season (right oblique strain).

The Twins dealt one infielder and acquired another in separate trades. And they picked up a catcher and a slugging outfielder via free agency.

They sent third baseman Gio Urshela to the Angels for minor-league pitcher Alejandro Hidalgo on Nov. 18. Urshela had a .285 average with 13 home runs and 64 RBIs in 144 games last season.

The Twins traded for shortstop Kyle Farmer, sending minor-league pitcher Casey Legumina to Cincinnati. Farmer hit .255 with 14 home runs and 78 RBIs in 145 games for the Reds in 2022.

Adding Christian Vázquez provides catching depth after he signed a three-year, $30 million deal on Dec. 16. He hit .274 with nine home runs and 52 RBIs in 119 games in 2022 for the Boston Red Sox and Astros.

Joey Gallo, who brings the potential for power, signed a one-year deal on Dec. 20. He hit .160 with 19 home runs and 47 RBIs in 126 games for the Yankees and Los Angeles Dodgers last season. Gallo has 170 home runs since the start of 2017, tied for 12th in baseball during that span.

The Twins contended before fading and finishing third in the division (78-84). One of their biggest stars from last season, shortstop Carlos Correa, appeared headed to the Giants before reported issues with his physical provided an opening for the New York Mets. According to a report from The Athletic, the Mets have concerns with Correa’s physical as well.

Shortstops stood out in this free-agent class. The Cubs landed one of the Big Four, agreeing to a seven-year, $177 million deal with Swanson on Dec. 17.

While Swanson is the highlight of the team’s offseason, the Cubs — who finished third in the division (74-88) — didn’t stop there.

Tucker Barnhart gives the Cubs another option at catcher after agreeing to a two-year contract with $6.5 million guaranteed. Barnhart batted .221 with one home run and 16 RBIs in 94 games for the Tigers last season. He’ll help with the depth behind the plate after Willson Contreras — one of the best offensive catchers in team history — signed with the St. Louis Cardinals.

The Reds were tied for last in the NL Central with the Pittsburgh Pirates (62-100) last season.

The teams conducted a trade on Nov. 18, with the Reds acquiring infielder Kevin Newman for pitcher Dauri Moreta. Newman hit .278 in 78 games in 2022. The Reds made another trade that day, sending infielder Kyle Farmer to the Twins for minor-league pitcher Casey Legumina.

Catcher Curt Casali, who played for the Reds from 2018-20, returned on a one-year deal with a mutual option for 2024. He hit .203 with five homers and 17 RBIs in 57 games last season with the Giants and Mariners.

Casali’s deal was part of a busy Dec. 22 for the Reds, who also signed first baseman/outfielder Wil Myers and designated third baseman Mike Moustakas for assignment.

The Brewers made a series of trades in the offseason. They sent outfielder Hunter Renfroe to the Angels for pitchers Janson Junk, Elvis Peguero and Adam Seminaris on Nov. 22. Junk and Peguero have big-league experience the last two seasons for the Angels: Junk made six starts and one relief appearance, while Peguero has 16 relief appearances.

The Brewers also took part in a three-way trade on Dec. 12, getting catcher William Contreras and minor-league pitcher Justin Yeager from the Braves and reliever Joel Payamps from the A’s as part of the deal that sent catcher Sean Murphy from Oakland to Atlanta.

The Brewers acquired infielder Owen Miller from the Guardians on Dec. 14. Miller batted .243 with six homers and 51 RBIs in 130 games last season.

The Brewers were second in the NL Central (86-76), finishing seven games behind the Cardinals. They just missed out on the final NL wild-card spot.

Pirates manager Derek Shelton told reporters at the winter meetings that first base “was a place that we needed to get better.”

“And we added not only one but we added two,” he said, referring to Carlos Santana and Ji-Man Choi.

The Pirates signed Santana to a one-year contract on Nov. 29. He hit 19 home runs with 60 RBIs in 131 games for the Royals and Mariners last season.

The Pirates acquired Choi from the Rays in exchange for minor-league pitcher Jack Hartman on Nov. 10. Choi had 11 home runs and 52 RBIs in 113 games in 2022.

Pitcher Dauri Moreta, picked up in a trade from the Reds for infielder Kevin Newman on Nov. 19, had a 5.40 ERA in 35 games (one start) in ‘22. The Pirates also added first baseman/outfielder Connor Joe on Dec. 19, sending minor-league pitcher Nick Garcia to the Colorado Rockies.

Willson Contreras will experience the Cubs-Cardinals rivalry from a new perspective after agreeing to a five-year deal — reportedly for $87.5 million — on Dec. 7.

Contreras was a three-time All-Star during his seven seasons with the Cubs. He batted .243 with 22 home runs and 55 RBIs in 113 games last season.

“Willson is a proven All-Star performer who is driven to win each and every day,” Cardinals President John Mozeliak said in a statement. “The Cardinals have had a lengthy history of standout catchers, and we feel that Willson is someone who is capable of adding his name to that distinguished list in the years to come.”

Contreras joins a team that won the division (93-69) before being swept by the Philadelphia Phillies in their NL wild-card series.

Sources: The Associated Press, The Athletic.