Todays Though > News > Who has the edge? Breaking down the matchups for Dolphins (4-3) at Lions (1-5) – Boston Herald
News

Who has the edge? Breaking down the matchups for Dolphins (4-3) at Lions (1-5) – Boston Herald 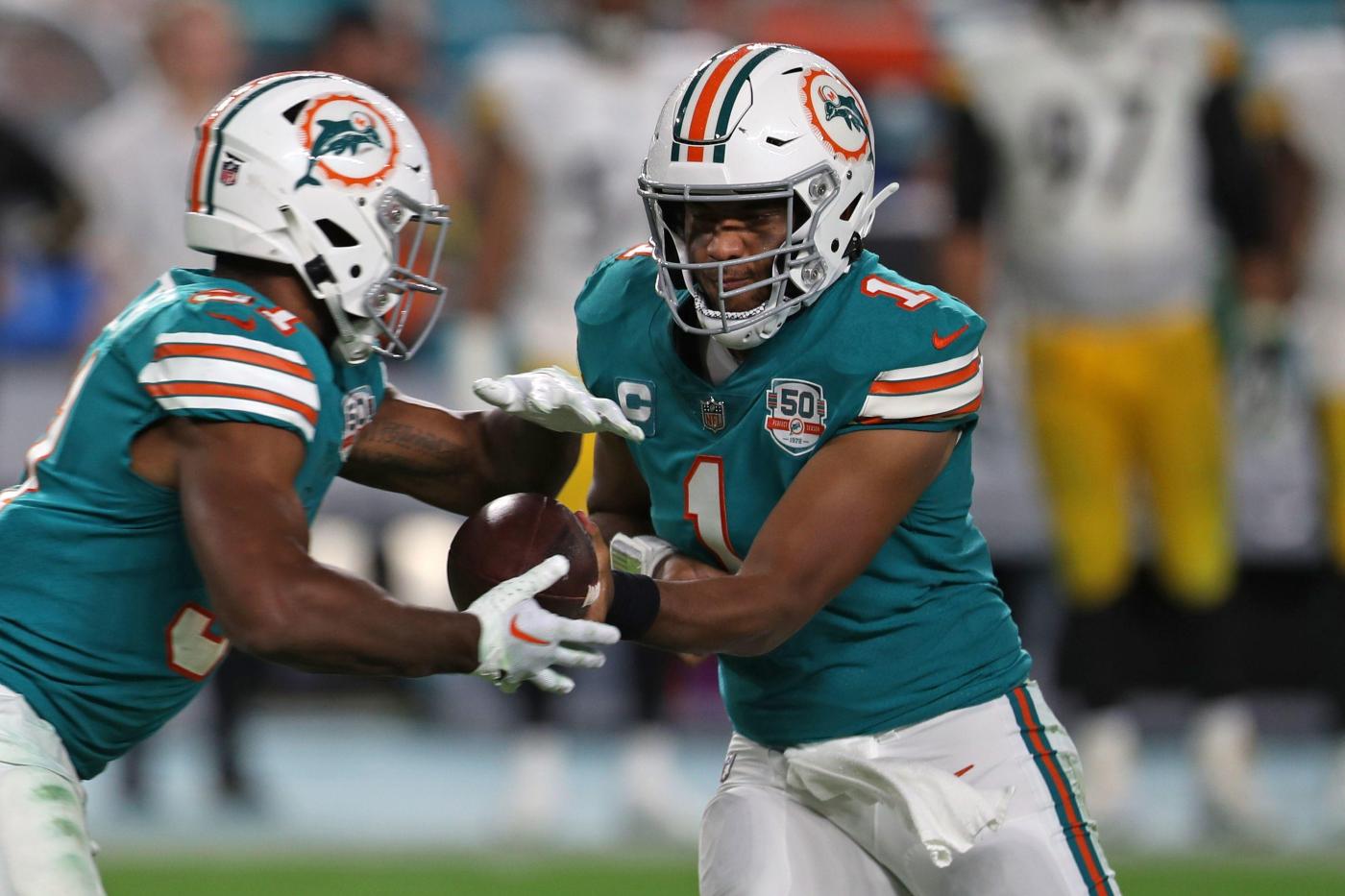 When the Dolphins run: Miami posted its second team rushing effort that surpassed 100 yards in last Sunday night’s win over the Pittsburgh Steelers, with 111 on the night. Raheem Mostert, who has grabbed hold of the lead back role, had 79 yards on his 16 carries, consistently showing solid burst and vision.

The return of left tackle Terron Armstead was a huge plus, and it was evident with how many rushes to his side went for sizable gains. Center Connor Williams and right guard Robert Hunt also deserve credit for what they’ve done throughout the season. Chase Edmonds only had 17 yards on his seven carries. He got the call on coach Mike McDaniel’s questionable fourth-and-3 decision. A hole was there if he kept going left, but he turned inside and was stuffed.

The Lions’ run defense is 30th in the NFL, and their 12 rushing touchdowns allowed is worst in the league. Free safety DeShon Elliott leads the team with 49 tackles, and middle linebacker Alex Anzalone is second with 47 as Detroit runs a 4-3. Edge: Dolphins

When the Lions run: It appears talented tailback D’Andre Swift could be in line to return after being hampered by shoulder and ankle injuries that haven’t allowed him to play since Week 3. He was on a tear before going down, with a whopping 8.6 yards per carry. Power back Jamaal Williams has held it down since, rushing for a 4.5 average. Expect both to get touches.

The Dolphins held the Steelers and running back Najee Harris to 95 team rushing yards, and they have been bumped up to the NFL’s No. 7 run defense. Outside linebackers Jaelan Phillips and Andrew Van Ginkel were stellar last time out with eight tackles apiece and exceptional hustle plays deep into the night. Miami lost some run support from strong safety Brandon Jones after losing him to a torn ACL for the season. Edge: Even

When the Dolphins pass: Quarterback Tua Tagovailoa is back for a second game after returning from concussion and should be sharper than he was outside of that opening drive against the Steelers. Tagovailoa missed his targets on multiple occasions when there were opportunities for big plays with yards after the catch if he hit his playmakers in stride. He also had Pittsburgh’s defense drop four interceptions.

Tyreek Hill leads the NFL in receptions (57) and receiving yards (773) with Jaylen Waddle fourth in receiving yards (621). The two rank sixth and seventh among receivers in yards after the catch. Armstead’s return, along with veteran Brandon Shell’s emergence at right tackle seems to be providing the pass protection Tagovailoa needs. The quick passing game also helps keep the hits away.

Elliott and cornerback Jeff Okudah will have their hands full in the secondary. Aidan Hutchinson, the rookie out of Michigan, is off to a strong start with 4 1/2 sacks in six games. Detroit has former Dolphin first-round pick Charles Harris rushing opposite him. Edge: Dolphins

When the Lions pass: Quarterback Jared Goff is completing 62.3 percent of passes with 1,583 yards, 11 touchdowns and six interceptions. Standout receiver Amon-Ra St. Brown (28 receptions, 275 yards, three touchdowns) is expected to clear concussion protocol by Sunday. Josh Reynolds (24-343-2) has been an upstart option for Goff, and T.J. Hockenson (23-315-3) is one of the better tight ends in the league. Swift can also catch out of the backfield.

Cornerback Xavien Howard appears to be returning to form where he can be locking down his side after groin injuries have bothered him early this season. Miami hopes to get cornerbacks Kader Kohou and Keion Crossen back, but Noah Igbinoghene and Justin Bethel stepped up in a big way with interceptions against the Steelers. The Dolphins will find ways to replace Jones, alongside top free safety Jevon Holland. It could be a combination of Eric Rowe, Clayton Fejedelem and Verone McKinley up from the practice squad.

Phillips has gotten his pass rush going of late. If defensive end Emmanuel Ogbah can return from his back injury, that could get the Miami pass rush back to being lethal while also incorporating Van Ginkel and Melvin Ingram. Jones will also be missed for what he provided on the safety blitz. Edge: Dolphins

Special teams: The Dolphins largely cleaned up some of their special teams miscues in the win over Pittsburgh — or at least they weren’t bitten by special teams when Mostert muffed a kickoff but recovered it and Wilson had an adventurous punt catch. Kicker Jason Sanders was 3 for 3 on field goals, and punter Thomas Morstead had four of his six punts downed inside the Steelers’ 20.

The Lions are expected to again elevate former University of Miami kicker Michael Badgley from the practice squad after he was 2 for 2, including one from 53 yards in last week’s loss to the Cowboys. Detroit’s punter is Jack Fox, punt returner is Kalif Raymond, and the Lions have used running back Justin Jackson and practice-squad receiver Maurice Alexander, an FIU and Miami Booker T. Washington High alum, on kick returns.

Intangibles: The Dolphins have lost their past two road games, but those were against the Jets, who are on a four-game winning streak, and the Bengals, who have won four of their past five. Meanwhile, the Lions enter on a four-game losing streak. They have the NFL’s worst defense and, after averaging 35 points through their first four games, they’ve scored 6 points in their past two outings combined. Miami’s speed on the Ford Field turf and enclosed environment should bode well for McDaniel’s offense. Detroit, though, will play hard for coach Dan Campbell, the Dolphins’ one-time interim coach in 2015. Edge: Dolphins