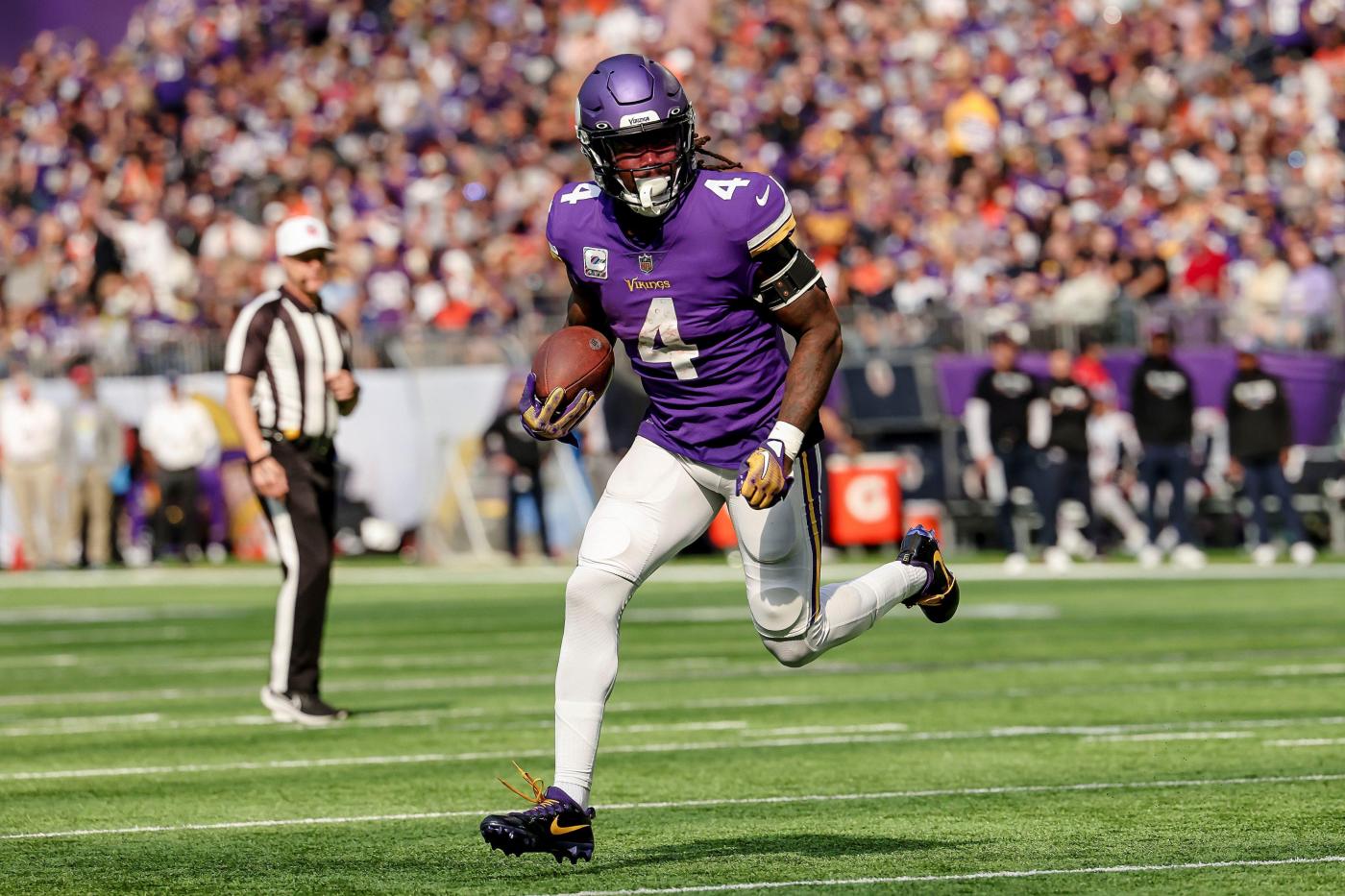 When the Dolphins run: If there was a bright spot from the demoralizing 40-17 loss to the New York Jets last Sunday, it was that the run game got going. It started to show flashes of what coach Mike McDaniel had in San Francisco. Raheem Mostert was the catalyst, going for 113 yards and a touchdown on 18 carries. McDaniel was creative, getting the ball to Tyreek Hill on rushes to the outside and even the sneak to tight end Durham Smythe for a touchdown as he came in motion under center.

Mostert is becoming the Dolphins’ lead back, it appears, although it could still be a matchup-based decision each week. He is dealing with a knee injury, too. Miami was without Terron Armstead for much of the Jets game. His return, along with right tackle Austin Jackson’s, potentially, could provide a boost.

The Vikings are 20th in the NFL against the run. They’re coming off their best game stopping the ground game, holding the Chicago Bears to 78 rushing yards, their first time limiting an opponent under 100. Linebacker Jordan Hicks leads the team with 45 tackles, and he has 2019 All-Pro Eric Kendricks next to him on the inside. Safety Harrison Smith is strong in run support. Edge: Vikings

When the Vikings run: The Minnesota run game is surprisingly in the bottom half of the league, but three-time Pro Bowl running back Dalvin Cook can turn that around in a moment’s notice. Cook, who enters with 373 yards on 81 carries (a 4.6 average) and three touchdowns, will be hungry to flourish in his first professional game at Hard Rock Stadium. The Miami Central High product used to crush the Miami Hurricanes in that building when he played for Florida State.

The Dolphins’ run defense ranks 13th in the NFL. They just allowed the Jets to score five times on the ground against them on Sunday, while rookie tailback Breece Hall went for 97 yards rushing, on top of his 100 receiving. I felt Miami would be better at stopping the run and more dominant up front than they have been through five games. That front seven takes pride in stopping the run, and it should be a hard-fought battle in the trenches. Edge: Even

When the Dolphins pass: We now know rookie seventh-round pick Skylar Thompson will get his first NFL start while fellow quarterbacks Tua Tagovailoa and Teddy Bridgewater progress through concussion protocol. Thompson kept the Dolphins in the game for much of Sunday at New York until things unraveled in the fourth quarter. He finished 19 of 33 for 166 yards and an interception.

Thompson took 15 quarterback hits, sometimes as Miami’s two backup tackles and left guard Liam Eichenberg struggled to protect and other times from holding on to the ball being indecisive. The Dolphins could get Armstead and right tackle Austin Jackson back for the Vikings game. And Thompson will have Hill and Jaylen Waddle at his disposal. The third-string passer also drew another 95 yards in pass-interference penalties vs. the Jets.

The Vikings are 22nd in pass defense. Aside from Smith, a standout safety, they have former Broward County high school standouts in cornerback Patrick Peterson (Blanche Ely) and backup safety Josh Metellus (Flanagan). On the edge, Za’Darius Smith, Danielle Hunter and D.J. Wonnum can bring the pressure, so Miami better shore up its pass protection. Edge: Vikings

When the Vikings pass: With quarterback Kirk Cousins and star receiver Justin Jefferson leading the way, Minnesota has the league’s eighth-ranked passing offense. Jefferson leads the NFL with 547 receiving yards. Cousins has 1,327 yards and seven touchdowns while completing 66.2 percent of his passes. He is also susceptible to getting picked off, throwing five interceptions.

That could present the Dolphins with an opportunity to come away with their first interception since the season’s opening defensive series against the Patriots. The hope is cornerback Xavien Howard taking off the Jets game lets his groins heal. He expects to play on Sunday, but if he’s not 100 percent, that could be problematic if the Dolphins go the route of letting him face Jefferson 1-on-1. Miami already remains without opposite starting cornerback Byron Jones.

Can the Dolphins pass rush please show up? We understand having Jones unavailable and Howard out last Sunday and playing through injuries the previous several weeks limits the Miami defense’s ability to blitz, but Jaelan Phillips, Emmanuel Ogbah and others have to start getting to the quarterback on their own when the Dolphins rush four. Edge: Vikings

Special teams: The discouraging thing is the Dolphins have had something go wrong on special teams in virtually every game, but some of it seems somewhat fluky. Dolphins kicker Jason Sanders has missed two field goals and Vikings kicker Greg Joseph, an FAU alum, has missed four, but all the field goals that the two have missed have come from beyond 50 yards.

Dolphins punter Thomas Morstead has been solid with the help of his gunners. Clayton Fejedelem’s return gives Miami a special teams boost. The Vikings have Ryan Wright punting, Jalen Reagor returning punts and Kene Nwangwu on kick returns. The Dolphins haven’t yet reaped the benefits of using top playmakers in the return game. Edge: Even

Intangibles: By mid-October, the Dolphins’ home-field advantage from the South Florida heat and humidity starts to wear off slightly, but temperatures will still be in the 80s with 60-plus percent humidity. Cook is familiar with those South Florida conditions, though, even if now in his sixth professional season up north. It’ll be tough for Miami to win with a third-string quarterback, but Thompson has the advantage of the week’s preparation, as opposed to getting thrown into the fire at the Jets. Edge: Dolphins