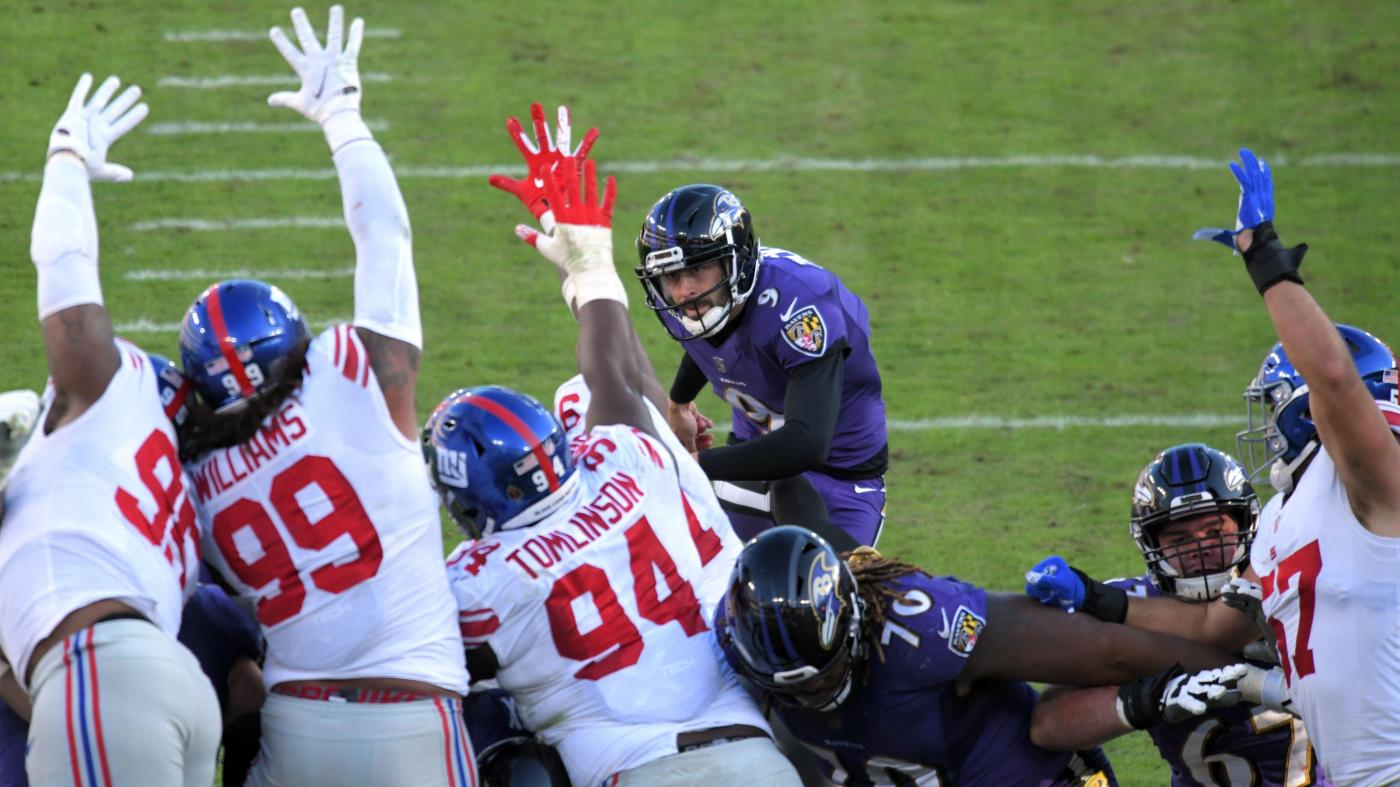 Here’s how The Baltimore Sun sports staff views the outcome of Sunday’s Week 6 game between the Ravens and New York Giants at MetLife Stadium in East Rutherford, New Jersey:

Ravens 24, Giants 20: The game’s most talked-about subplot is how much of the kitchen sink Don “Wink” Martindale will throw at Lamar Jackson. The game’s most important subplot might be how much attention the Ravens devote to Saquon Barkley — and how well they can tackle him. Considering the Giants’ injuries, the Ravens should have the edge in all three phases. But the Giants are unconventional enough that a win won’t come easily.

Ravens 28, Giants, 21: The Giants are a scrappy bunch but they only have a running offense, which the Ravens will shut down. New York defensive coordinator Don “Wink” Martindale will cause problems for quarterback Lamar Jackson, but not enough to prevent a Ravens victory. The Giants really aren’t a good football team yet; more pretenders than contenders.

Ravens 27, Giants 19: There are two essential plots here: Will Lamar Jackson punish Don “Wink” Martindale’s blitzes and will Saquon Barkley and Daniel Jones run all over a soft Baltimore run defense? These will make for compelling football, but the Ravens have more paths to victory and will not let this become a trap game against an opponent that played in London last Sunday.

Ravens 28, Giants 20: The Ravens made strides Sunday night, containing Joe Burrow and the Bengals’ talented receivers. I’m expecting the secondary to continue their strong play, especially against Daniel Jones. It’s hard to envision a scenario where the Ravens completely neutralize Saquon Barkley, who looks every bit like the player he was before tearing his ACL. As long as the Ravens can contain him to some degree, I think Lamar Jackson and the offense will do enough to pull out a victory and head into their divisional matchup against the Browns next week with a ton of momentum.

Ravens 31, Giants 17: Don’t let the records fool you. By Football Outsiders’ DVOA, a measure of overall efficiency, the Giants are among the worst 4-1 teams since 1981. Running back Saquon Barkley and quarterback Daniel Jones are a formidable combination when healthy, but the Giants don’t have any other playmakers who can threaten the Ravens’ defense. It’s going to take another herculean effort from coordinator Don “Wink” Martindale and a banged-up Giants defense to keep this game close, and that’s asking too much.

Ravens 28, Giants 17: Are the Giants for real? I guess we’ll find out Sunday as they face their toughest test yet. Don’t be fooled by their 4-1 record; New York owns wins against the Titans, Panthers and Bears (by a combined 12 points), but it deserves credit for rallying to beat the Packers last week in London. The Ravens look primed to make a run as they continue to get reinforcements, and running back J.K. Dobbins starts to look more like the version of himself we saw in 2020. Slowing down running back Saquon Barkley, who’s second in the league in rushing, will be a tough task for the Ravens. It will be fascinating to see the chess match between offensive coordinator Greg Roman and former Ravens defensive coordinator Don “Wink” Martindale. Ultimately, though, talent matters, and only one side has Lamar Jackson.