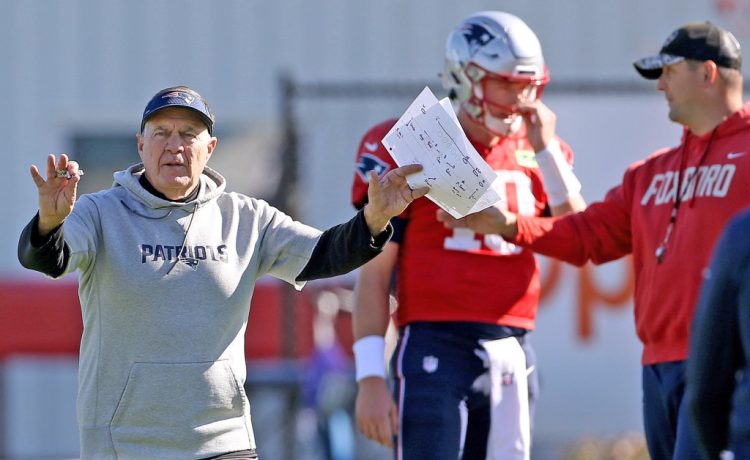 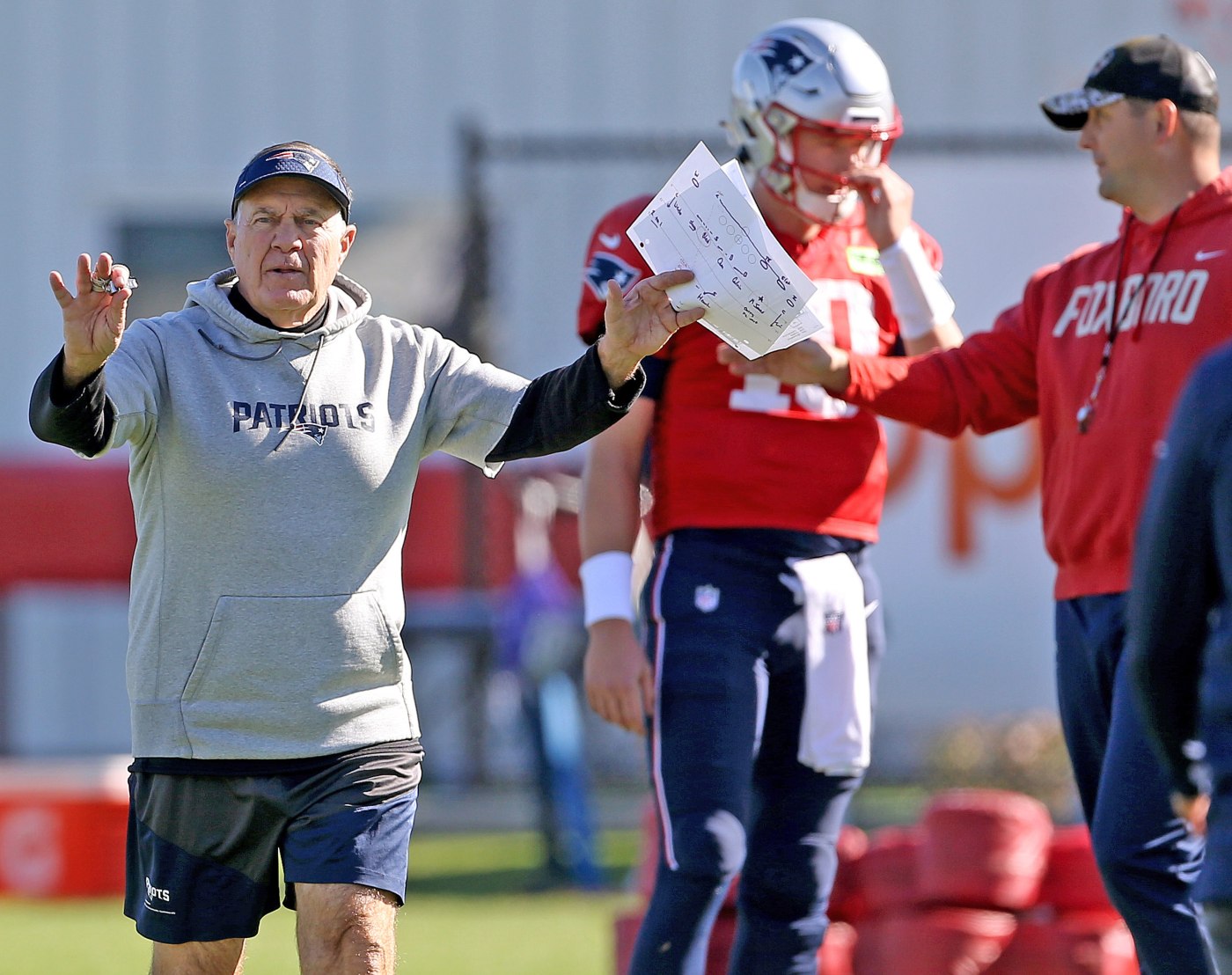 FOXBORO — To understand how the Patriots offense has spiraled so suddenly and so spectacularly over a dozen games, start with six words from Bill Belichick.

Nowadays, Matt Patricia and Joe Judge might be more aptly described as professional punching bags than coaches, as the Patriots offense unit sinks to new lows not seen in the Bill Belichick era The Pats have dropped multiple games because they’ve been out-coached, something their own players began to point out last week. But remember what happened after reports of Belichick promoting Patricia and Judge first surfaced in late February.

Belichick toyed with his best offensive position group, the only common thread between the Patriots’ run and pass struggles.

The Pats’ 2021 offensive line, which did not start its current best player in right guard Mike Onwenu, finished as a top-10 pass-blocking and run-blocking unit, per Pro Football Focus grading. Only left guard Ted Karras and right tackle Trent Brown were set to hit free agency, while Onwenu waited in the wings as a viable replacement at either position.

On March 14, Karras left the Patriots to sign a three-year, $18 million deal in Cincinnati. According to sources, the Pats lowered their initial offer with a $15 million maximum contract value down to $13 million in negotiations. The former offer may have kept Karras in New England.

A day later, Belichick traded right guard Shaq Mason to Tampa Bay once the Buccaneers upped their interest and agreed to offer a fifth-round pick. Dealing Mason was a cap-saving move for the Patriots, who used the extra space to sign aging Ty Montgomery and retain their own veterans. The Pats also explored acquiring former Cowboys right tackle La’El Collins, one of the league’s most talented blockers.

Five days later, Collins signed with Cincinnati. The Patriots responded by re-signing Brown the next day. Now, Brown is missing practice with a mysterious sickness, three weeks after the team first listed him with an illness while having him take second-team reps to start practice. Injury-prone Isaiah Wynn has joined him on the sideline with a foot injury he’s seemingly reaggravated.

Who could have seen this coming? Belichick.

Wynn has missed 37 games over his four-plus years in the NFL, and Belichick protected the Patriots against Brown’s health by re-signing him to a two-year deal heavy on incentives. If Brown wanted his desired payday, he had to play most, if not all, of the season. And until he was mysteriously benched against the Jets on Nov. 20, Brown did just that, though his play has waned.

The same holds true for the man to his right, first-round rookie left guard Cole Strange. An NFL executive recently lamented Strange’s lack of development to the Herald in an anonymous Q&A.

“Strange had a really nice game against (Steelers defensive tackle) Cam Hayward, and that impressed me,” the executive said. “As far as how he’s progressed, I don’t think he’s had as good a game since.”

Strange, of course, is being brought along by Patricia, who has predictably failed working simultaneously the de facto offensive coordinator and position coach in charge of the largest position on the team. And sometime around Karras walking, Mason getting traded, Strange arriving and the start of minicamp, Belichick and/or Patricia decided to flip Wynn from left tackle to the right side.

Since then, a once cheery Wynn has thinly veiled his discontent with reporters when asked about the change. More to the point, his play has undoubtedly bothered the coaches. Last month, Wynn ended a stretch of four consecutive games when he allowed a sack allowed and was penalized. He’s drawn nine flags this season, been benched twice and ranks among the worst run-blocking tackles in the league, per PFF.

In his place, the Patriots have tried career-long reserve Yodny Cajuste, who is now limited by calf and back injuries and missed last week’s loss to Buffalo. The swing tackle job formerly belonged to Justin Herron, whom Belichick traded to Las Vegas in September in a pick-swap deal. So now, Conor McDermott, a Jets practice-squad alum, is now the team’s only healthy offensive tackle. Like Cajuste, McDermott is nearing turnstile territory as a pass protector.

All together, the Patriots own the league’s worst run-blocking offensive line, per ESPN’s run-block win rate. Last week against Buffalo, Patricia’s lack of faith in their pass-blocking caused him to dial up short passes all night, even when score and time dictated a more aggressive approach. The Bills’ pressure rate still cleared 39%.

Looking ahead to Monday night’s game at Arizona, the Patriots’ starting O-line may very well consist of McDermott, Strange, Onwenu, center David Andrews and lifelong journeyman James Ferentz; a lineup that should undercut their run and pass plans equally, just as it has the last seven weeks.

And Belichick, the man who built this offensive line before handing it over to Patricia, seems to know it. Asked this week whether the Patriots’ play-calling should become more aggressive, he said: “Any idea can be a bad idea if you can’t execute it. So, if you can execute it, then it’s potentially a good idea. If you can’t do it, then it’s not going to work. And if your team physically can’t do whatever it is you’re trying to do, for whatever reason, then it’s probably not a good idea.”

And that’s how players win games, and coaches lose them.