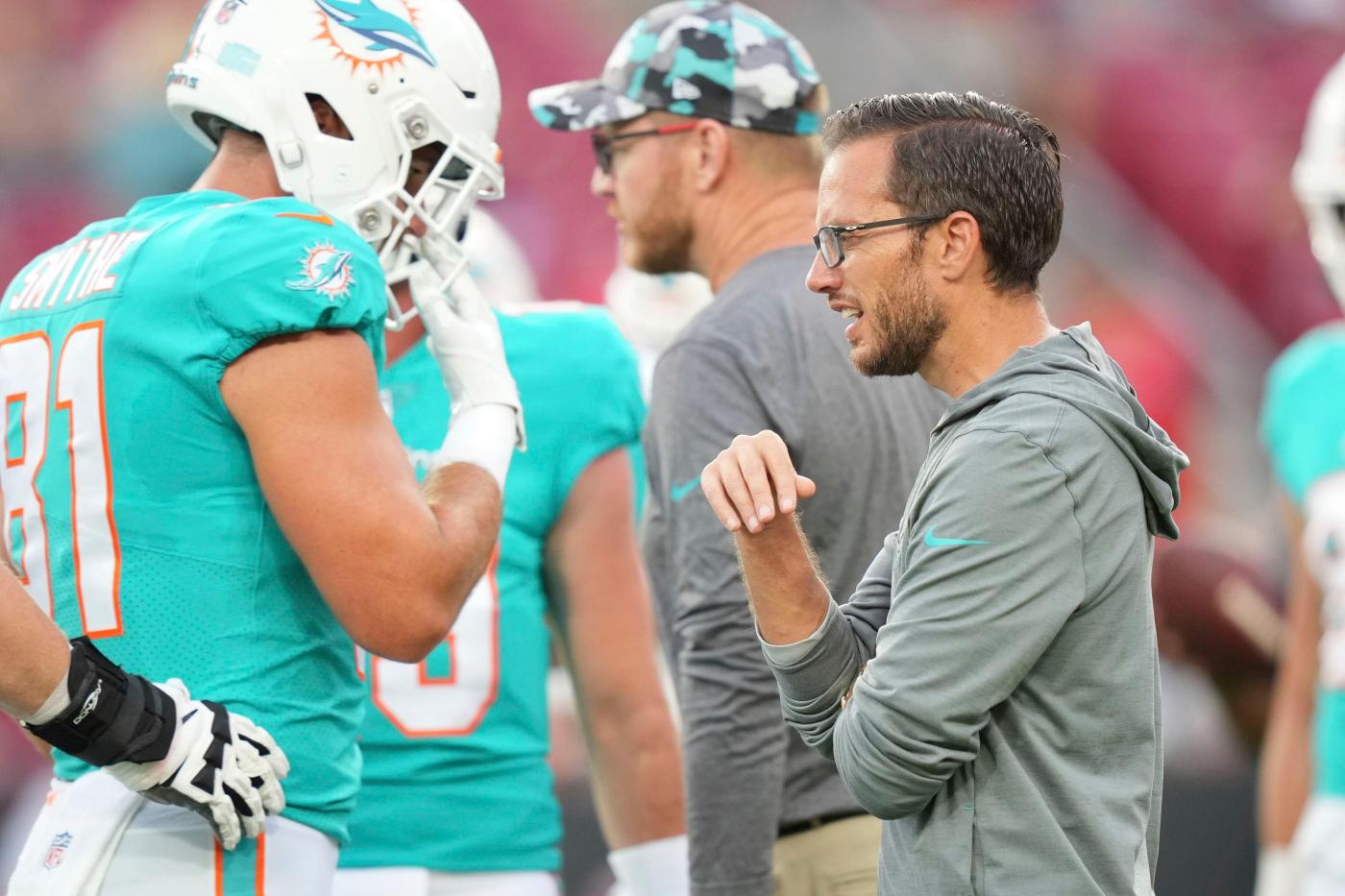 Conventional wisdom would tell you the Miami Dolphins should treat the second exhibition of the three-game preseason slate as the dress rehearsal, especially after resting most starters in the preseason opener.

Dolphins coach Mike McDaniel, though, is not one to conform to conventional norms.

As McDaniel said last week in Tampa, responding to an unrelated question: “I’m willing to do anything at any moment at any time.”

And McDaniel is once again mum on whether he will play his starters and quarterback Tua Tagovailoa ahead of the Dolphins’ preseason game against the Las Vegas Raiders, a 7 p.m. kickoff Saturday night at Hard Rock Stadium.

McDaniel sat nearly all his starters in last week’s exhibition at the Tampa Bay Buccaneers, with a few exceptions, such as tight end Mike Gesicki and outside linebacker Jaelan Phillips. With the Bucs taking the same approach, Dolphins third-string rookie quarterback Skylar Thompson had his time to shine in the 26-24 win. McDaniel’s strategy Saturday will likely remain under wraps until 90 minutes before kickoff, when the team announces which players won’t dress.

McDaniel has also previously said he’d be “surprised” if he didn’t get Tagovailoa any preseason snaps. It would make sense if those came on Saturday, with fans getting their first taste of the 2022 Dolphins at Hard Rock Stadium.

Tagovailoa’s training camp success leading up the Tampa game played a role in McDaniel’s comfort in allowing him to rest. While producing a number of solid throws this week, Tagovailoa tossed six interceptions in three practices. It could be great timing for Tagovailoa to produce a few sound first-half drives in a game-like setting against the Raiders.

On Tagovailoa’s end, he’s a gamer.

“I always want to play,” he said on Wednesday. “I wanted to play last week too, at least a couple of snaps, but Mike decided that then wasn’t the time. Hopefully, he gives the first offense an opportunity to go out there, hopefully get some plays in, understand some situations, knowing how to manage the game and get back into the groove of things.”

If that is the case, the Dolphins may still not run out their whole first-team offense. Second-year wide receiver Jaylen Waddle didn’t practice all week in what McDaniel called a preventative measure for a minor undisclosed injury. Veteran, three-time Pro Bowl left tackle Terron Armstead, did not participate in Wednesday’s team drills and missed Thursday’s practice entirely — this after ramping up his practice workload recently as he progresses from offseason knee surgery.

Assuming Armstead doesn’t play, Saturday will offer another look at the Dolphins’ backup tackle situation. If Austin Jackson is to be kept at right tackle, 2021 seventh-round pick Larnel Coleman will get extended preseason snaps again, as fellow reserve tackle Greg Little hasn’t returned to practice from undisclosed injury. The Dolphins also have the option of playing second-year lineman Liam Eichenberg back at left tackle, as he did most of his rookie season, while inserting Robert Jones at left guard. Or Michael Deiter can come in to play center while sliding Connor Williams to his natural left guard spot. Williams, at center, needs to show he can keep his shotgun snaps under control in a preseason game.

Onlookers will want to keep an eye on how reserve defensive backs perform on Saturday. Cornerback Xavien Howard should see limited snaps, if he plays at all, but you know what you’re getting out of the All-Pro. The same goes for second-year safety Jevon Holland, who had four of the practice interceptions of Tagovailoa this week.

With cornerback Byron Jones still on the physically-unable-to-perform list, it’s important at least two cornerbacks beyond Howard and Nik Needham show they can fill in — especially since Trill Williams was lost to a season-ending knee injury this week and six-year veteran Mackensie Alexander was signed.

Then, there are a slew of others who can build off a strong preseason opener in pursuit of a roster spot. Wide receiver Lynn Bowden, defensive back Elijah Campbell, outside linebacker Darius Hodge and versatile linebacker Sam Eguavoen were among those that made plays against the Bucs — Eguavoen with a fumble return for a touchdown, redeeming himself from a tough drive earlier that saw a key missed tackle.

These are the opportunities for players on the edge of the roster cutoff line to make their lasting impressions.