Todays Though > News > Will the Patriots dial back their aggressiveness on defense?
News

Will the Patriots dial back their aggressiveness on defense? 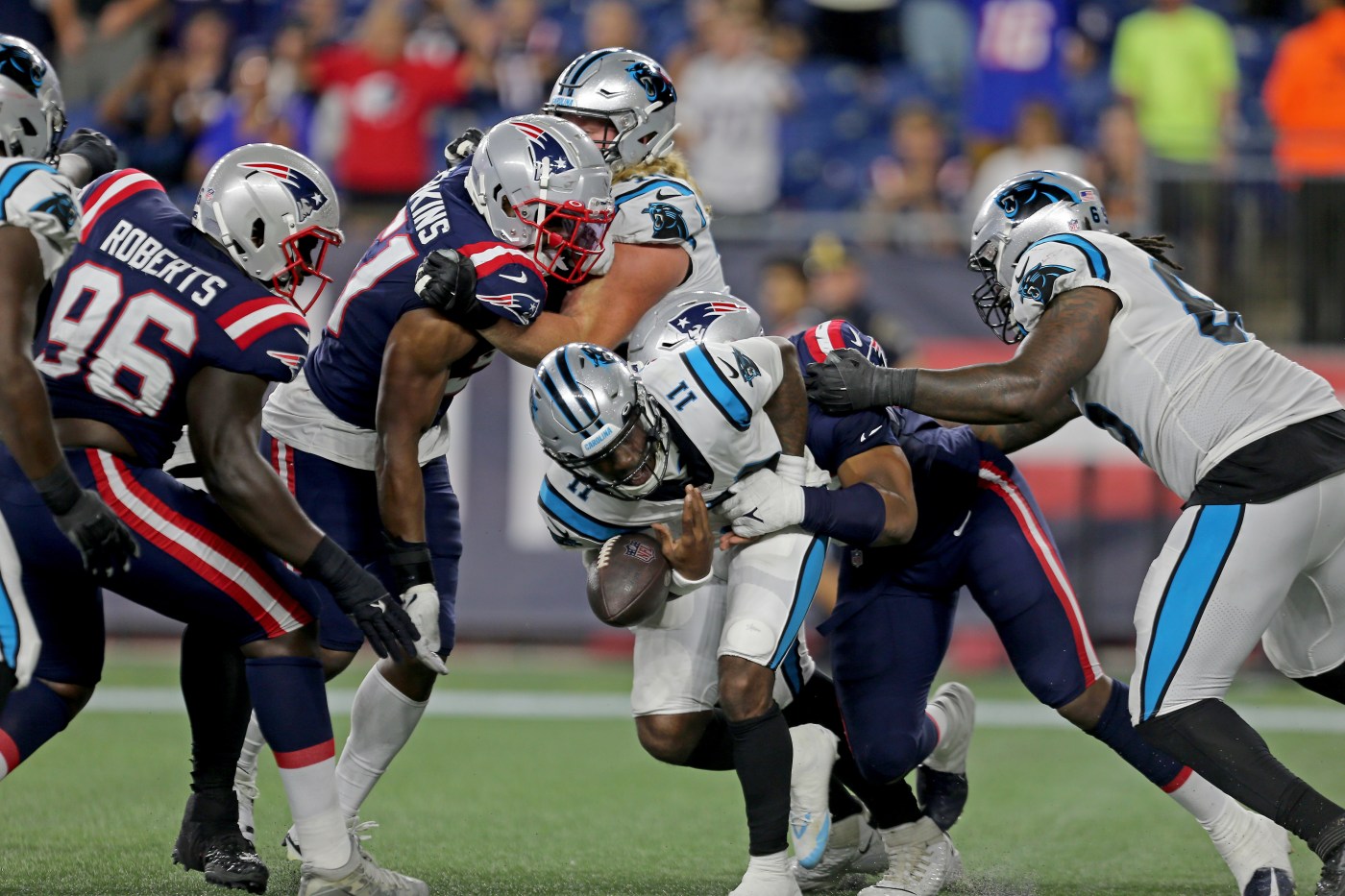 The Patriots defense did its share of blitzing during training camp and the preseason.

Defensive play-caller Steve Belichick sent safeties and linebackers after the quarterback fairly regularly during practices, as well as games. And the blitzers got home.

Given that, it’s easy to wonder how aggressive they’ll actually be during the regular season trying to rattle opposing quarterbacks.

Will they go zone blitz, which was made famous by Dick LeBeau and the Pittsburgh Steelers?

Or will they dial it back when the real bullets start to fly, be a little more cautious, and not risk leaving their cornerbacks exposed?

Whether they play zone, man-to-man, or a little of both, the Patriots are going to need an effective pass rush to help out the secondary against all of the high-powered offenses they’re going to face during the season, starting with Miami. How Bill Belichick and his defensive coaches accomplish that mission is going to be interesting to watch.

Speaking with former Patriots linebacker Ted Johnson, he wouldn’t be surprised if it turned out to be the blitz instead of solely relying on Matthew Judon, Christian Barmore, Josh Uche & Co. up front.

Maybe not quite to the degree of “Blitzburgh,” as the Steelers were called when LeBeau was the defensive coordinator, or even the Dolphins, who under previous coach Brian Flores weren’t shy about sending one or more gate-crashers with regularity.

The Patriots might not go to those lengths, but will still be attacking nonetheless. It’s not like Belichick hasn’t dialed up some creative and exotic blitz schemes himself in the past.

Patriots Hall of Fame safety Rodney Harrison remembers Belichick always having an “aggressive” mindset with the defense. Even in 2004, when the Pats lost Hall of Fame corner Ty Law, along with fellow starter Tyrone Poole, during that championship season, that didn’t stop the Patriots from attacking.

Harrison, now an NBC analyst, believes what we witnessed during camp was Belichick experimenting and testing the limits, pushing the envelope to see if the blitzers could get to the quarterback, but also, whether the current group of starting corners, be it Jalen Mills, Jonathan Jones and Myles Bryant, could handle their assignments without help. And if not man-to-man coverage, could they still send an extra rusher while playing zone?

“There’s a method behind his madness, you better believe that,” Harrison went on. “Belichick’s putting these pressures on the map because that forces Miami to have to prepare even more.”

In other words, he’s planting the seed. That’s why it’ll be intriguing to see what, if anything, comes out of it, especially against the Dolphins next week.

Did Belichick’s fact-finding during camp give him enough confidence to let it loose against Tua Tagovailoa in the season opener?

Seeing how well things played out over the course of the summer, Belichick probably has it stored in his back pocket.

For the most part, the back end largely held up with Mills, Jones and Bryant sticking to receivers. Rookies Jack Jones and Marcus Jones also held their own.

Recently, we asked safeties coach Brian Belichick about the aggressiveness quotient, and the desire to attack the quarterback with players from his unit, be it Kyle Dugger, Adrian Phillips, Jabrill Peppers, Devin McCourty or Joshuah Bledsoe.

While he didn’t want to surrender any trade secrets, Belichick did provide some insight on the Patriots mindset when it came to unleashing his safeties and having them add to the pass rush.

“I’m certainly confident in our safeties when they rush. They’re great athletes, powerful athletes that can make an impact when they rush,” Belichick said during a recent availability with the assistant coaches. “But it’s about the whole picture of the coverage. When you blitz, obviously, you have less support in the back end. We need to have confidence in every call, where if we’re sending an extra, the offense should have a problem picking it up, and that should help out the coverage, even if they have less support.

“Everything has to tie together,” he continued. “I think my group has a great variety of skill sets. They’re at a high level. I think we’ll utilize them in the defense the best way we can.”

Same with the linebackers.

The Patriots added speed at the second level with Mack Wilson, who got to the quarterback when asked to blitz. Raekwon McMillan, who missed all of last season with an injury, also provides a measure of speed.

Disguise and confusion are words often associated with Belichick’s defenses, especially the good ones. It helps if the opposing quarterback doesn’t know where the pressure is coming from, or if it’s coming at all. Harrison said that would be key against Tagovailoa, who’s first up for the Patriots.

“I would come up there and blitz him, drop out, drop eight, rush three, I’d show him so many different looks,” said Harrison, “because that’s what you want. You want to test his decision making. He doesn’t have a lot of experience. Make him make good decisions.”

For their part, the players want to attack. They want to be aggressive, much like the Dolphins will be Week 1 in terms of going after Mac Jones.

“That’s how we want to play,” Matthew Judon said. “We want to play with a downhill mentality. We want to be aggressive. We want to attack the line of scrimmage and knock it back. So with speed and smarts you got to do everything within a defense, but when we’re moving fast and we’re executing that’s going to happen a lot.”

Play-caller Belichick likely won’t go crazy blitzing quarterbacks, but it’ll certainly be there, up his sleeve, whenever he wants to spring it on an opposing offense.

Adams a fan of McDaniels’ offense

One person who’s not complaining about the complexity of Josh McDaniels’ offense?

During a recent interview with the Raiders YouTube channel, Adams said he loves the offense, and is thriving in it.

While acknowledging the complexity, the former Packers wideout, who is arguably the best in the game, is enjoying doing some things he’s never done before.

“It’s a lot of routes that I never ran before, different concepts, just a whole new feel,” Adams said. “It’s a pretty complex offense for sure. It’s probably the most complex one I’ve ever been a part of.”

It was also interesting to hear Adams talk about McDaniels’ receptiveness to feedback from the players.

“I love how open Josh has been to my feedback of the way that I like to run certain routes,” Adams said. “Same with Hunter (Renfrow) and Darren (Waller) and all the guys, really. It’s been good. I’m kind of finding a new me within this offense because I’ve been able to do what I’ve done in the past, but put my own little flavor on it a couple of these routes and make some plays.”

No need to hold the Sauce

Jets rookie cornerback Sauce Gardner is certainly not lacking in confidence. The No. 4 overall pick told Newsday he can be the No. 1 cornerback of all time.

And the former Patriots wide receiver told a whopper during an “ask me anything” session on Reddit forums.

Edelman was asked about the Malcolm Butler mystery, and why the cornerback was benched in Super Bowl 52 against the Eagles.

Edelman actually didn’t play in that Super Bowl, thanks to having ACL surgery, but he was a spectator at the game, which was played in Indianapolis.

Edelman indicated he was with the Food Network’s Guy Fieri and wasn’t privy to Bill Belichick’s reason for keeping his top corner out of the game.

“I don’t really know, I was too busy getting kicked out of the Colts box with Guy Fieri that Super Bowl,” Edelman posted on the site, when asked about the Butler benching. “Guy had some tickets in the Colts box (oh, we’re friends nbd). Got settled, got my popcorn got my cracker jacks, telling old war stories to the lovely folks in the box.

“Then I get a tap on the shoulder. Colts management found out I was there, and let’s just say Indy isn’t known for its hospitality. Thank god there was a Pats fan with a box next door.”

The defensive end, a top edge rusher at the Division 3 school, was signed by the Seahawks as an undrafted rookie free agent. He impressed Pete Carroll enough during training camp to earn a spot.

Speaking with him prior to the draft, Onujiogu, a two-time MASCAC Defensive Player of the Year, said he was “excited to show my talent and make my dreams come true.”