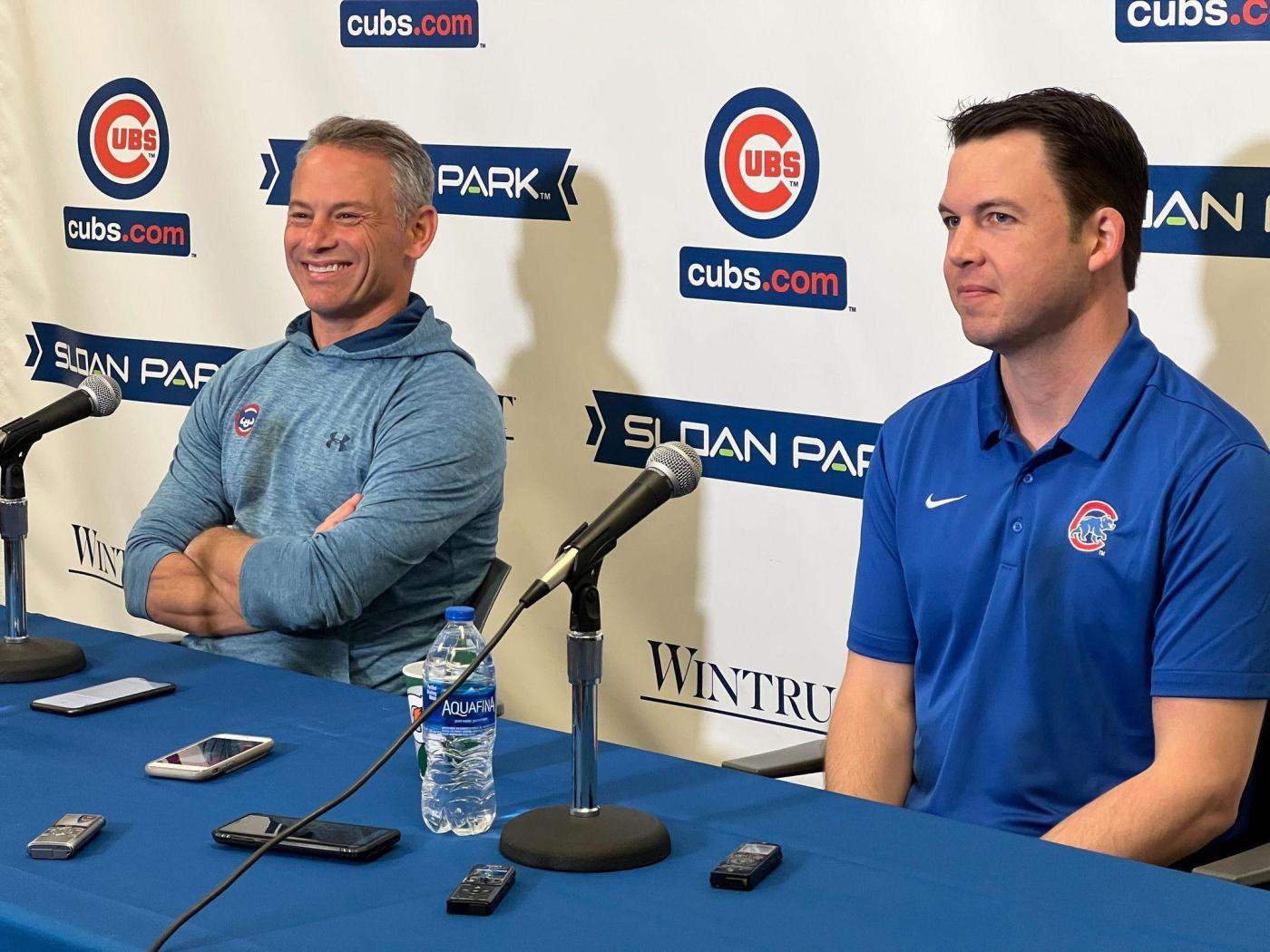 One of Carter Hawkins’ first tasks when he accepted the Chicago Cubs general manager job last November took only a few moments to complete.

“But you don’t need Twitter to have any idea about how hungry the Chicago fans are,” Hawkins said Dec. 6 at the winter meetings. “You can feel that from being around the ballpark and the passion that they have for it. You can feel that through what you guys write on a day-to-day basis. It’s very obvious how much the fans want a winner and it’s something that we value a ton and factor in a lot as we’re thinking through things.

“Whether they want to believe it or not, we feel the same way and are doing everything we possibly can to get there.”

Cubs fans’ appetite for major upgrades to a 74-win team have only grown over the last two weeks.

Frustrations have become more vocal on social media. Three of the four top free-agent shortstops signing elsewhere can do that to a fan base looking for more tangible investments in a roster. Only Dansby Swanson remains available after Carlos Correa agreed to a 13-year, $350 million contract with the San Francisco Giants on Tuesday, following the trend of long-term shortstop deals by Xander Bogaerts with San Diego (11 years, $280 million) and Trea Turner in Philadelphia (13 years, $300 million).

Fortunately for president of baseball operations Jed Hoyer, Hawkins and the front office, two months remain before the Cubs report to Mesa, Ariz. Signing center fielder Cody Bellinger (one-year deal) and right-hander Jameson Taillon (four-year contract) addressed needs. But if the Cubs are serious about competing in 2023, they cannot stop there.

Swanson is the best remaining all-around position player available in free agency. However, his offensive profile doesn’t significantly boost the level of power production the Cubs lineup needs. It was already an area in which the Cubs were lacking coming out of the 2022 season, and that was before Willson Contreras signed with the St. Louis Cardinals. Swanson’s defense, though, would elevate the team’s run-prevention efforts, giving the Cubs two Gold Glove-level defenders in Swanson at shortstop and Nico Hoerner at second base.

It’s not unreasonable for Swanson’s price tag to go up after the other megadeals for shortstops. How far the Cubs are willing to go to land Swanson, a player they’ve maintained interest in since the onset of the offseason, will test the front office.

Part of the job requires recalibrating plans to account for changes in the market. A robust free agency has seen roughly $3 billion allocated to players. For a big-market team with the Cubs’ financial flexibility, they had an opportunity to wield their money to find upgrades, at some positions substantially.

Hoyer hinted at the Cubs’ offseason approach during his end-of-season news conference Oct. 10. Notably, he cited “intelligent spending” while “being aggressive to try to fill those holes in the best way possible.”

“We can definitely compete next year, and we also want to create something lasting and special,” Hoyer said then, “so we’re always going to have to keep those two things in mind.”

The free-agent market ultimately dictates how teams can operate in a given offseason. It’s difficult to see how intelligent spending and the current market dynamic can coexist for the Cubs. If the organization is unwilling to engage and commit to an expensive, long-term contract, they will miss out on the type of players they can build around. That’s the current reality. Maybe the four nine-plus year contracts given out this offseason that will take Aaron Judge, Correa, Bogaerts and Turner into their 40s is an aberration. Counting on that to change next offseason is risky, however.

Hoyer does not seem to garner the same inherent trust from Cubs fans that Theo Epstein received when he had the job 11 years ago. Hoyer’s role as general manager and Epstein’s right-hand man furthered his front/-office pedigree and leadership, adding to his years in Boston and San Diego. Hoyer took over the job in a tough spot, with restricted payroll spending by ownership fueling Yu Darvish’s trade and Kyle Schwarber being non-tendered, while free agency loomed for Kris Bryant, Anthony Rizzo and Javier Baéz. But this is now fully Hoyer’s show. His fingerprints are all over the roster. Buy-in from fans is needed — and at the moment, that level of support is being tested.

It’s a different fan base from the first rebuild. The standards have changed. Winning a World Series as part of five postseason appearances in a six-year span was supposed to become the norm. Cubs fans could accept three seasons of an awful on-field product because a top-to-bottom organizational overhaul came with an expectation that it wouldn’t be part of the franchise’s future roster-building cycles.

Hoyer’s desire to build a perennial contender through drafting and player development is an admirable approach. This blueprint brought the organization its first championship in 108 years. The Cubs, though, are not the Pittsburgh Pirates. Or the Cincinnati Reds. Or (insert any small-market team here). Operating in Chicago with the revenue streams the Ricketts family generates from Wrigley Field, the Cubs brand and their investments surrounding the ballpark — soon to feature the new DraftKings sportsbook in the right-field corner of the stadium — should mean money is consistently invested back into payroll.

In September, Chairman Tom Ricketts told a group of reporters, including the Tribune, “the ball’s in Jed’s court when it comes to how and where he puts financial resources to work. He’s got a lot of flexibility, so we’ll let him do it. Let him decide what he wants to do.”

Everything comes down to a choice.

The Cubs could have chosen to better bridge the roster to their top young minor-league talent, the best of which should be in the majors by 2024 or 2025. They could have chosen to take advantage of a winnable National League Central, which isn’t a powerhouse division right now. They could have seized the opportunity to acquire a star (or two) rather than wait for the right time to add an elite player — and the hefty contract that comes with it. And at some point, the Cubs need more star power. Or, more simply, the Cubs need to stack consecutive offseasons in which they add better players on multiyear deals.

After the 2023 season, the Cubs will have three guaranteed contracts: Seiya Suzuki, Taillon, whose deal is not yet official, and David Bote, currently off the 40-man roster. Marcus Stroman can opt out of his final year; if he stays, the right-hander would earn $21 million in 2024. The Cubs’ total 2024 commitment, including Taillon and Stroman, currently sits at roughly $72 million. This figure includes Bellinger’s mutual option buyout, Yan Gomes’ $1 million buyout (he would earn $6 million if the ‘24 club option is picked up) and Kyle Hendricks’ $1.5 million buyout (he has a $16 million team option).

The Cubs have the financial means to improve the roster. Most of the top-tier free agents are gone, likely setting up more short-term options. They could pursue trades and pull from a deeper farm system to bolster a roster that still needs upgrades in the bullpen, at catcher and at least one proven power hitter. They made their first bullpen move Thursday, agreeing to a one-year deal with veteran reliever Brad Boxberger, who posted a 3.13 ERA and 132 ERA+ in 164 games the last three seasons. Swanson is the most obvious way to get better.

The Cubs are coming off their lowest full-season attendance since 1997. Fans want to see a better team in 2023. Hoyer and Co. have two months to put together a better product.