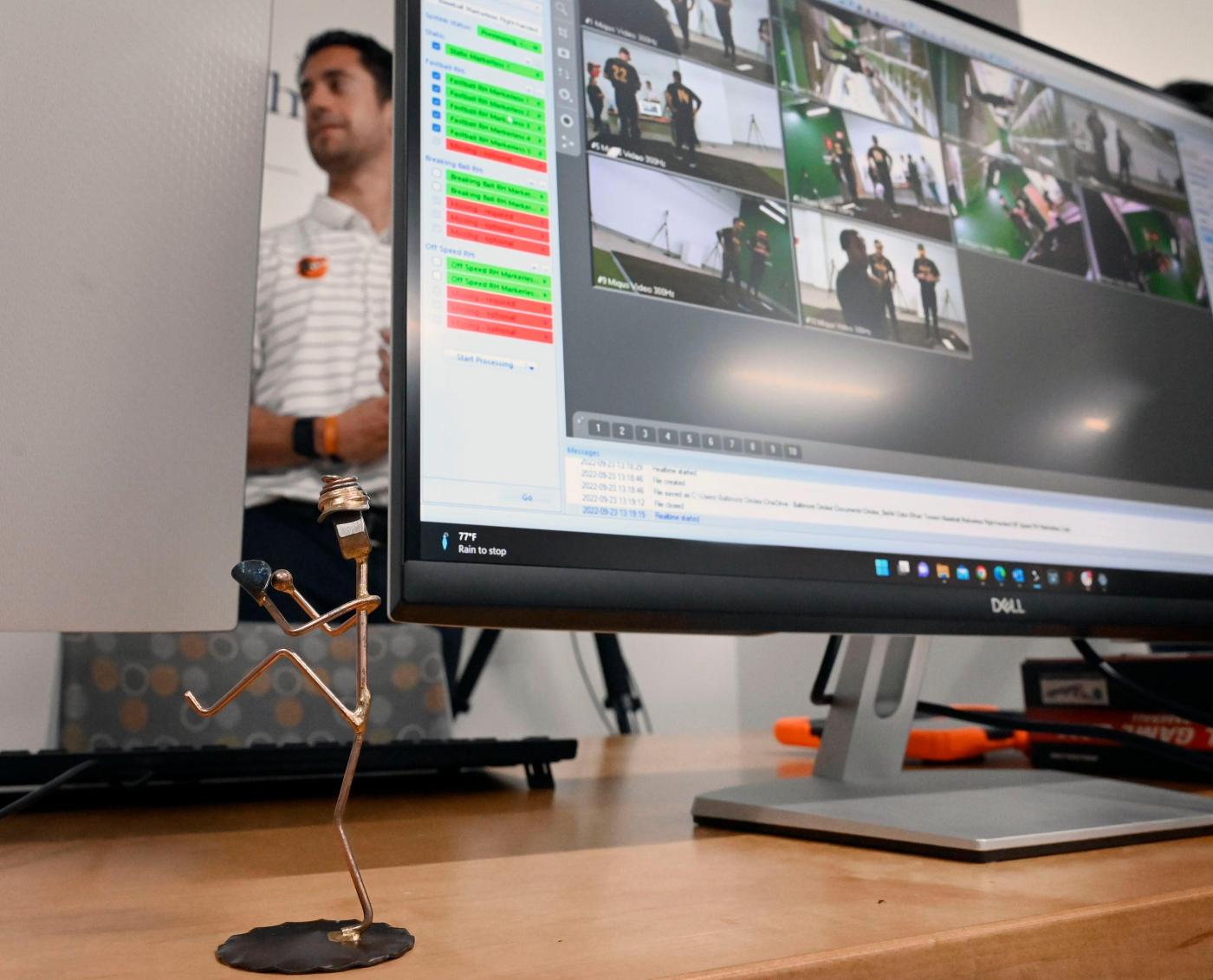 Austin Voth’s time with the Orioles has taught him a great deal about who he is as a pitcher. Last week, he headed to Bel Air to see if the organization could help to answer another question.

“Am I being the best version of myself,” Voth wondered, “or is there another version of me that I can be?”

On the third floor of MedStar Health’s Bel Air campus, he took the first steps toward finding out. Instead of performing his between-starts bullpen session at Camden Yards, Voth worked through each of his pitches off the mound at the Orioles’ new pitching lab. Opened this summer in partnership with MedStar Health, the lab will help the team optimize its pitchers’ deliveries, for both performance and injury prevention, through the use of motion capture video and other tools.

“It’s something that is becoming standard practice for sort of modern development of players in general, the usage of this type of technology,” Orioles director of player development Matt Blood said. “The key though is, yes, being able to collect the data, but then being able to accurately and effectively use it. The other piece of this puzzle is you have the equipment, you have the information, and then what do you do with it once you have it? And I think that’s where their competitive advantage lies in regards to player development.”

At the major league level, the Orioles have enjoyed a historic turnaround from their pitching staff, with Voth’s 2.77 ERA after posting a 10.13 mark with the Washington Nationals a shining example. The hope is the lab will allow them to continue maximizing pitchers’ abilities throughout the organization while keeping them healthy and on the field. By throwing 15 to 20 pitches in the lab, the players are supplying the Orioles with enough data to find ways to help them further improve.

Located within about an hour’s drive of Camden Yards and two of the Orioles’ minor league affiliates, numerous pitchers in the organization have been able to throw a bullpen session at the lab, offering insights that their pitching coaches, strength and conditioning coaches and trainers have been able to apply to their subsequent work.

Inside a white-walled room, a pitcher’s mound and home plate sit 60 feet, 6 inches apart, as they would in a standard bullpen and ballpark. But 10 cameras surround the mound to offer a 360-degree view of the pitcher’s motion, each angled such that his entire body is in the frame as he goes through his delivery. The mound itself features three force plates — one near the rubber and two down the mound — to measure the pressure the pitcher applies with his feet and where he lands as he throws. The system is markerless, meaning a calibration process allows the cameras alone to be enough to trace the pitcher’s body movements without any kind of on-person trackers required.

Information from each pitch, including various angles and measurements of body position, is recorded, with footage from each of the cameras and an all-encompassing skeletal replay able to be shown. The Orioles then work to condense that information into a form where it’s understandable and applicable for the player and his coaches.

“It’s just an area that’s gotten so technical because of all the technology that’s available that you really need to have a team of experts working on it,” Orioles executive vice president and general manager Mike Elias said. “It’s not something that just being a good baseball person is enough to understand how pitchers develop these days.”

Before opening their own, the Orioles had sent pitchers to Wake Forest’s pitching lab in North Carolina to undergo these screenings. Joey Mylott, then a graduate student there, had the chance to work with some of the team’s data. Now, he’s in his first year as the Orioles’ biomechanist, helping to run the club’s lab.

The organization prides itself on collaboration, one of its three tentpoles for its hires along with growth, mindset and humility. Using the data the pitching lab supplies is an example of that in effect, with Mylott’s work and cohesion between strength and pitching coaches allowing the Orioles to give their players a simple but effective message of how to improve.

“You can have a biomechanist, but if your strength coaches and pitching coaches aren’t interested, then the data just stops there,” Blood said. “Then you just have data and you’re not actually doing anything with it. It really takes the whole group communicating regularly for this to be worthwhile.”

Blood said the lab has been in the organization’s plans since he was hired near the end of the 2019 season. It first opened to pitchers in July, though the final strips of artificial turf weren’t placed on the mound until last week. Blood said he got emotional when he visited earlier this month, knowing how much time and organizational investment went into it. The Orioles, who co-sponsored the lab with MedStar Health, declined to say how much the lab cost.

They are far from the first team to offer an in-house lab to their players. Veteran right-hander Jordan Lyles, the first member of the major league pitching staff to visit the lab, said the Texas Rangers, who he played for the previous two seasons, had their pitching lab across the street from their spring training facility. But in joining those ranks, the Orioles are also saving their players the hassle of spending time and money in the offseason to get a motion capture performed and interpreted if they want one.

“To take that process and put it in-house with the organization who knows them, knows the direction for their development and can then make a plan according to what we have,” Holt said, “I think it’s a tremendous step forward.”

When Lyles visited the Orioles’ lab in July, he did so seeking a way to increase his velocity and improve his efficiency in his lower half, particularly his hip-shoulder separation. He believed seeing the motion capture program’s reenactment on screen would be beneficial, and he came away from the session with cues he plans to apply to his offseason training, saying the changes he learned he needs would be difficult to enact midseason.

“It was easy for me to give my morning away to go see if there’s something that can click,” Lyles said, “or something that I can walk away with that makes me a half percent better.”

Links in the chain

The Orioles have gotten far more than that out of many of the pitchers who have visited, Blood said. The organization has the advantage of three of its four full-season affiliates being in Maryland, with High-A Aberdeen playing about 20 minutes away from MedStar Health’s Bel Air campus. The Triple-A team is not too far, either, in Norfolk, Virginia, allowing the team to cycle many of its pitchers through the site.

“You’re seeing guys either increase velocity or feel better or improve their stuff based on something that was flagged from their assessment,” Blood said. “[They’re] immediately being able to take it into their daily work with the pitching coach and the strength coach at the affiliate and immediately attack it.”

That the Orioles are able to provide specialized plans for each pitcher is among the most significant parts of these insights.

“In my opinion, it’s the only way,” Holt said. “There are things that all pitchers need to do to be successful, such as working ahead, putting guys away, taking advantage of their basic skill set. That said, individualization in terms of how each pitcher is able to maximize their own game, I think it’s the only way.”

The lab will not only benefit the Orioles and their minor leaguers, but also other teams throughout the region. MedStar Health’s Dr. Sean Curtin, who also serves as the Orioles’ head team physician, said the lab is a “shared space” between the team and the medical system, though the Orioles will have priority use.

“We’re happy to assist the Orioles in player development,” Curtin said, “but from our standpoint, it’s a tremendous opportunity to basically bring this incredible technology to our population.”

Last week, players from Towson’s baseball team used the lab, and Curtin noted that patients rehabbing arm injuries will be able to throw there to periodically measure their progression and ensure they’re healing properly. The technology can also help with gait analysis for those recovering from injuries that affected how they walk.

The motion capture gives the Orioles insight into every link of what Holmes and Curtin called “the kinetic chain.” Curtin said the team can identify exactly where in that chain an issue lies, allowing them to see that it’s actually a back problem, for example, that’s causing unneeded stress on a pitcher’s elbow or shoulder. Perhaps, Elias said, they can spot something preventing a player from properly pronating his wrist on his changeup or getting his fingers on top of his fastball.

The sequence, Holmes noted, starts at the feet, and the information from the force plates provides the Orioles with information on what the pitchers do — and the impact that has on their ankles, knees and the rest of the way up — throughout their motion.

And the Orioles hope a lot of big things will come out of their new pitching lab, tucked away on the third floor of a building about 45 minutes from Camden Yards.