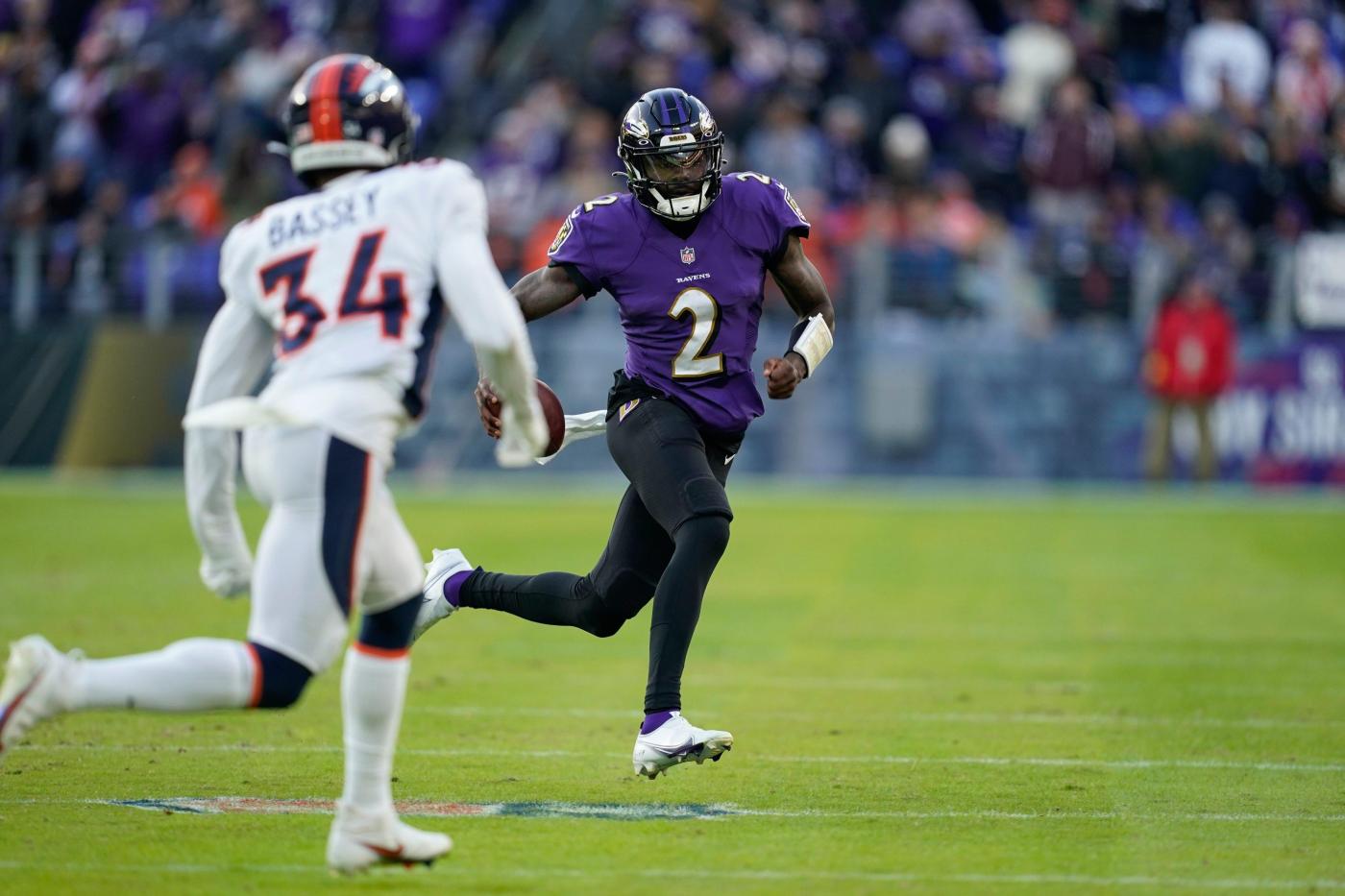 Backup quarterback Tyler Huntley scored a go-ahead touchdown run to lead the Ravens to a last-minute 10-9 win over the Denver Broncos, brightening an afternoon dampened by the loss of quarterback Lamar Jackson.

Huntley’s 2-yard keeper with 28 seconds remaining helped the Ravens (8-4) avoid one of the biggest upsets in recent team history, keeping them from plunging into greater uncertainty as they look to avoid another late-season spiral. Broncos kicker Brandon McManus’ would-be game-winner from 63 yards fell short as time expired.

The status of Jackson, a pending free agent and team leader, cast a pall over M&T Bank Stadium as the offense sputtered and stalled out for much of the afternoon. But Huntley’s score capped a 16-play, 91-yard drive that gave the Ravens their first lead all game.

Jackson left the game late in the first quarter with a knee injury after an innocuous-looking sack. With the offense missing its most dynamic weapon, the Ravens finished with 285 yards, led by Huntley (27-for-32 for 187 yards and an interception). Huntley added 10 carries for a team-high 41 yards.

A week after collapsing in the fourth quarter of a loss to the Jacksonville Jaguars, the Ravens held Denver (3-9) to 272 yards of offense (5.2 per play). Broncos quarterback Russell Wilson finished 17-for-22 for 189 yards. McManus hit his first three field goal attempts, including 50- and 52-yarders, but missed his decisive kick.

Denver entered the game as a nine-point underdog, having lost seven of its past eight games. According to Football Outsiders’ efficiency metrics, the Broncos had been the NFL’s worst team since trading away star outside linebacker Bradley Chubb on Nov. 1.

Two of the Ravens’ most promising second-half drives ended with lowlight interceptions. As the Ravens approached midfield in the third quarter, Huntley lined up a throw on the move to tight end Mark Andrews as Cooper pulled at Huntley’s jersey. Andrews never saw the pass, but Broncos safety Justin Simmons did, and he picked it off at the Ravens’ 48. The Broncos had to settle for a field goal and a 9-3 lead.

Early in the fourth quarter, wide receiver James Proche II took a lateral on a double-reverse play at the Broncos’ 29, found the laces on the football and looked for running back Kenyan Drake near the goal line. Proche’s first career pass was thrown into double coverage, where Simmons got his second pick. The Ravens were booed lustily.

Jackson had left the game late in the first quarter after a sack by outside linebacker Jonathan Cooper, who tackled him from behind after beating the block of tight end Josh Oliver on a play-action pass. Jackson was evaluated briefly in the team’s medical tent before leaving the field with members of the Ravens’ medical staff, and was ruled out early in the second half.

With Jackson in, the Ravens’ offense couldn’t do much: just 20 yards over its two full drives before the injury. With Huntley in, the offense did only a little bit more. On his first full drive, he led the Ravens on a 10-play drive inside the Broncos’ 10-yard line midway through the second quarter. But the offense stalled out in the red zone again, and kicker Justin Tucker came on for a game-tying 26-yard field goal.

The Ravens entered halftime trailing 6-3, having posted just 122 yards and 4.2 yards per play. They punted on four of their six first-half possessions; their last ended without enough time to spike the ball before a possible Hail Mary or field goal attempt. Boos followed the team as it jogged into the locker room.