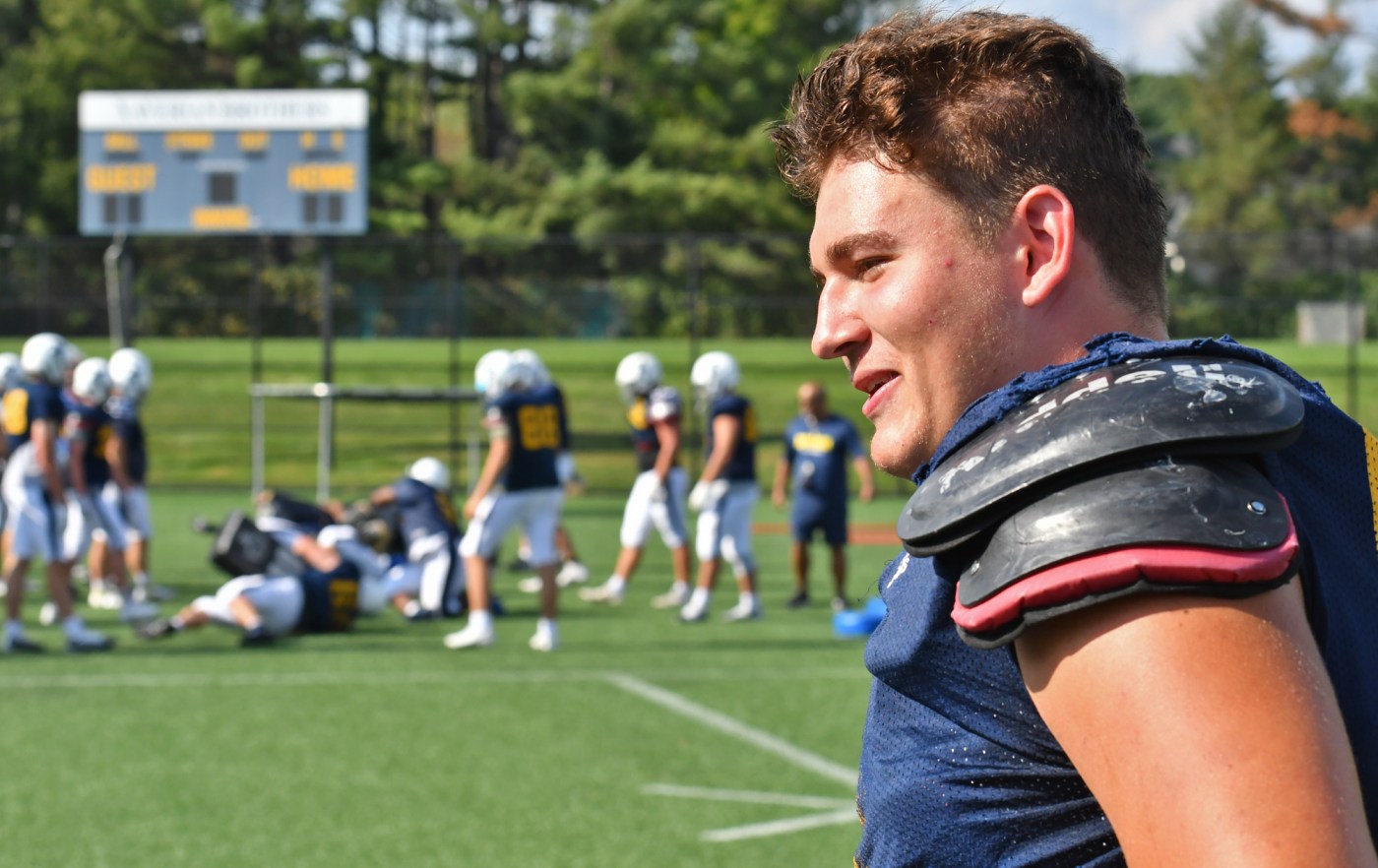 WESTWOOD — When Jon Mould came to Xaverian, he was a hockey and baseball player. At 6-foot-6, a lot of people ask if he plays basketball.

A lot has changed since he was a freshman. But now, unequivocally, Mould is a football player, through and through. And he’s a pretty darned good one.

The 290-pounder has started on the Hawks’ offensive line every year since the Fall II season. Along the way, programs like Pittsburgh, Syracuse, UMass, and a host of Football Championship Subdivision programs offered him a scholarship.

In the end, he made a verbal commitment to Harvard, as he was pursued by virtually every Ivy League program. And Xaverian coach Al Fornaro is happy to have the big guy back on Clapboardtree Street for his senior season.

“First time I saw him, we had open house (at Xaverian), (Mould) walked right by the football table and right to the hockey table,” Fornaro said. “I go, ‘OK.’ He ran with us in the summer (Xaverian has workouts open to every sport). I never pressured him. I spoke to the dad. The dad said, ‘This is what he does.’ You always have multiple sign-ups. In the summer, in running, you noticed for a young man with size, he had very good footwork.”

“They pushed me in that direction (to play football),” Mould said of those summer workouts. “I respected those seniors who were originally there. It was a really great experience. That’s kind of why I started playing football: those guys.”

So Mould came out as a freshman, and Fornaro said Mould’s experience in a sport with a helmet that has hitting — hockey — was a benefit, not a detriment.

“The physicality part, once he learned technique was much easier that someone who had never done it before,” Fornaro said. “We’re not as sophisticated as people think. You’ll have a man on your head. You’ll have inside or outside help in double-teaming that dude. So as soon as he was taught how to run block and how to pass block … Obviously, he’s a very smart student. He’s a 4.4 or a 4.5 (grade-point average), but he’s also a smart athlete. There’s a huge difference in those things. But he’s a smart athlete. It came quickly to him.”

As Mould became a starter on the offensive line, he moved around a little. Mould has experience starting both at guard and at tackle. This fall, he will be the starting left tackle. That versatility should help him once he joins the Crimson.

“I thought that dream of being a hockey player was still there probably sophomore year,” Mould said. “But after that, I was starting to get reps on varsity (football). I started on varsity (football) as a sophomore because Covid hit. So we played in the spring. I think once I started then, I was like, ‘OK, I’m ready. This is my thing now.’ I love this. That’s when I made that transition from that mindset to a football mindset.”

And Mould seems locked in to try and help the Hawks compete in both the Catholic Conference and the Div. 1 playoffs, yet at the same time sounds pumped for Harvard.

“I want to finish senior year strong and focus on senior year,” Mould said, “but I am very excited for the next year, too.”