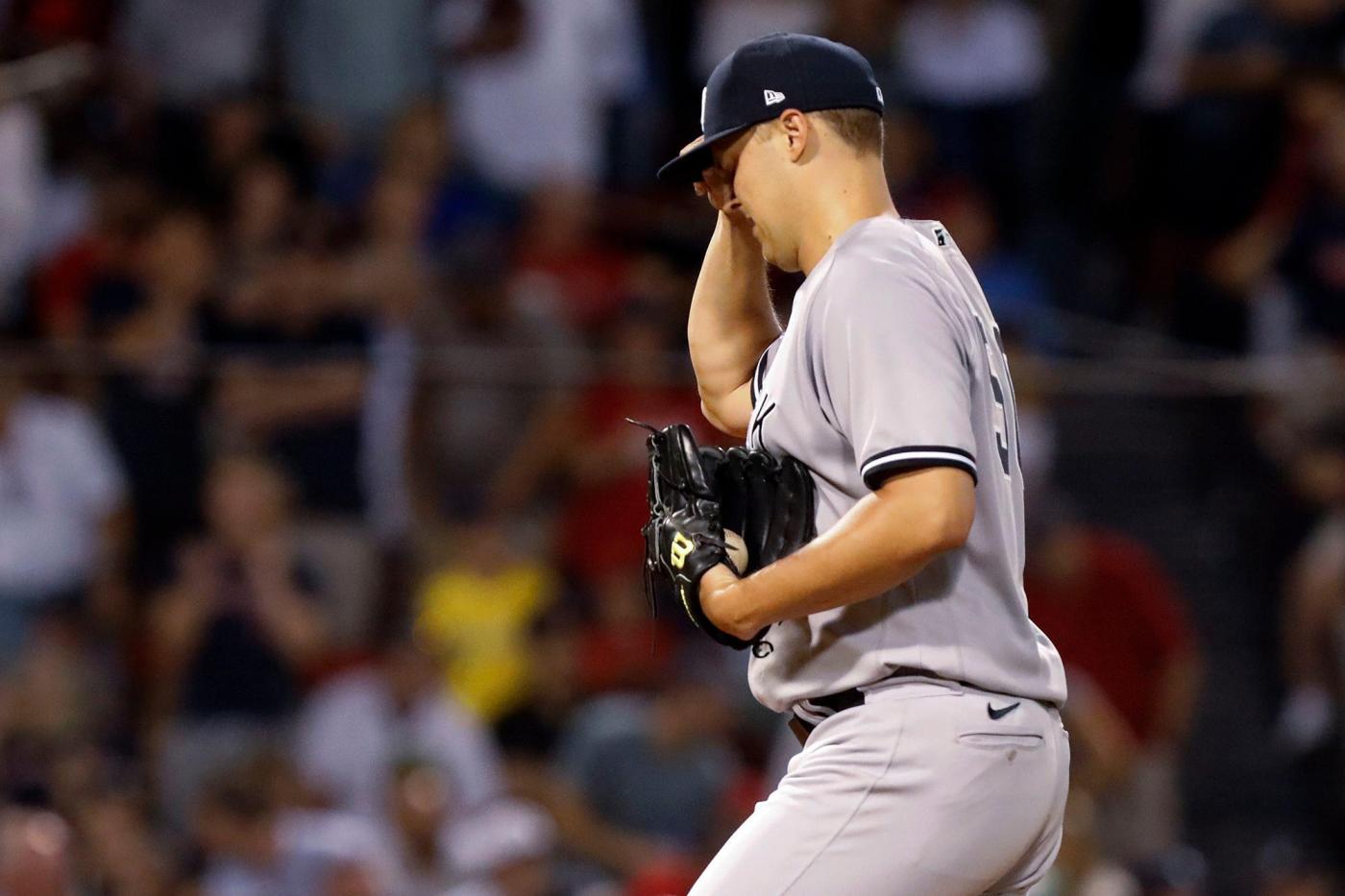 BOSTON — At least it’s over. The Yankees ended a disastrous nine-game, 11-day road trip by being shutout 3-0 by Michael Wacha and the Red Sox Sunday night at Fenway Park.

The Yankees (72-43) went 2-7 on the trip and have lost nine of their last 11 games. The Red Sox (57-59) handed the Bombers their fourth straight series loss. They are 2-6 in series since the All-Star break. It was the eighth time this season the Bombers were blanked.

Jameson Taillon gave the Yankees a chance. He held Boston to three runs on six hits over seven innings. He did not issue a walk and struck out four.

Taillon was hurt by the long ball and the Yankees struggling offense.

With Tommy Pham aboard, Taillon tried to jam Rafael Devers inside with a 96-mile-an-hour fastball on a 3-2 pitch and the Red Sox third baseman turned on it quickly and absolutely crushed it. It landed 433 feet from home plate in the right-field seats and gave the Red Sox a 3-0 lead.

Pham had also scored the Red Sox’s first run. He led off bottom of the first with a single and scored on Xander Bogaerts ground out. Taillon worked around baserunners in the next two innings, stranding one on third thanks to a double play, but cruised through the fourth and fifth.

The Yankees could not solve Wacha. He scattered two hits, walked one and struck out nine over seven innings.

The right-hander retired the first 14 hitters he faced before Miguel Andujar lined a single into center field with two outs in the fifth. Saturday night’s hero, Isaiah Kiner-Falefa drew a walk, but Kyle Higashioka grounded out on a tremendous diving play by Red Sox All-Star third baseman Rafael Devers. Andrew Benintendi led off the sixth with a single, but Wacha struck out Aaron Judge (for the second time on the night) and Josh Donaldson to end the inning. 6

It was a good sign for the Bombers as they go down the stretch of their final 48 games of the regular season. The Yankees rotation still has the fourth-best ERA in the majors (3.46) and the second-best in the American League behind the Astros’ staff (3.15). Over the last month, the Bombers pitchers posted a 4.04  ERA.

There have been some big hits to the rotation.

They lost Luis Severino, who was pitching well, for over a month when he suffered what the team described as a “low grade,” lat strain. He is on the 60-day injured list and cannot come back until the middle of next month.  In a surprising move in the minutes before the trade deadline, the Yankees front office traded away Jordan Montgomery, who had been a steady presence in the rotation, for center fielder Harrison Bader, who is on the injured list.

So now the Bombers have to hope that adding Frankie Montas to a group that will eventually include Severino in the final weeks of the season is enough for their World Series intentions.

It’s especially encouraging to see Taillon, who started the streak in Seattle on Monday night in Seattle, got back on track and Montas seemingly settled in.

Taillon retired 10 of the last 11 batters he faced in the Bombers’ only win in Seattle. He allowed three runs over seven innings, which the Yankees have to hope is a sign of him turning around after pitching to a 6.25 ERA over his previous eight starts.

“Man, my takeaway was just kind of his aggressiveness. I thought he mixed his four-seam and his two-seam really well. Like I thought his fastball was really good that night and it was both four-seam and two-seam,” Yankees manager Aaron Boone said.

“Like the four-seam he used a lot, as he always does, but the two seamer, especially the righties, I thought was really effective for him. Again, like even going through a stretch where it was a month of just okay. I didn’t feel like the stuff was that far off. It was just the mistakes that were hurting him with the long ball. His stuff did seem a little crisper to me. Whether that’s real or not, that was just my takeaway. I felt like he was just aggressive on the attack, pace and stuff seemed really strong. And it was a night  we needed length. He gave us a really strong performance.”