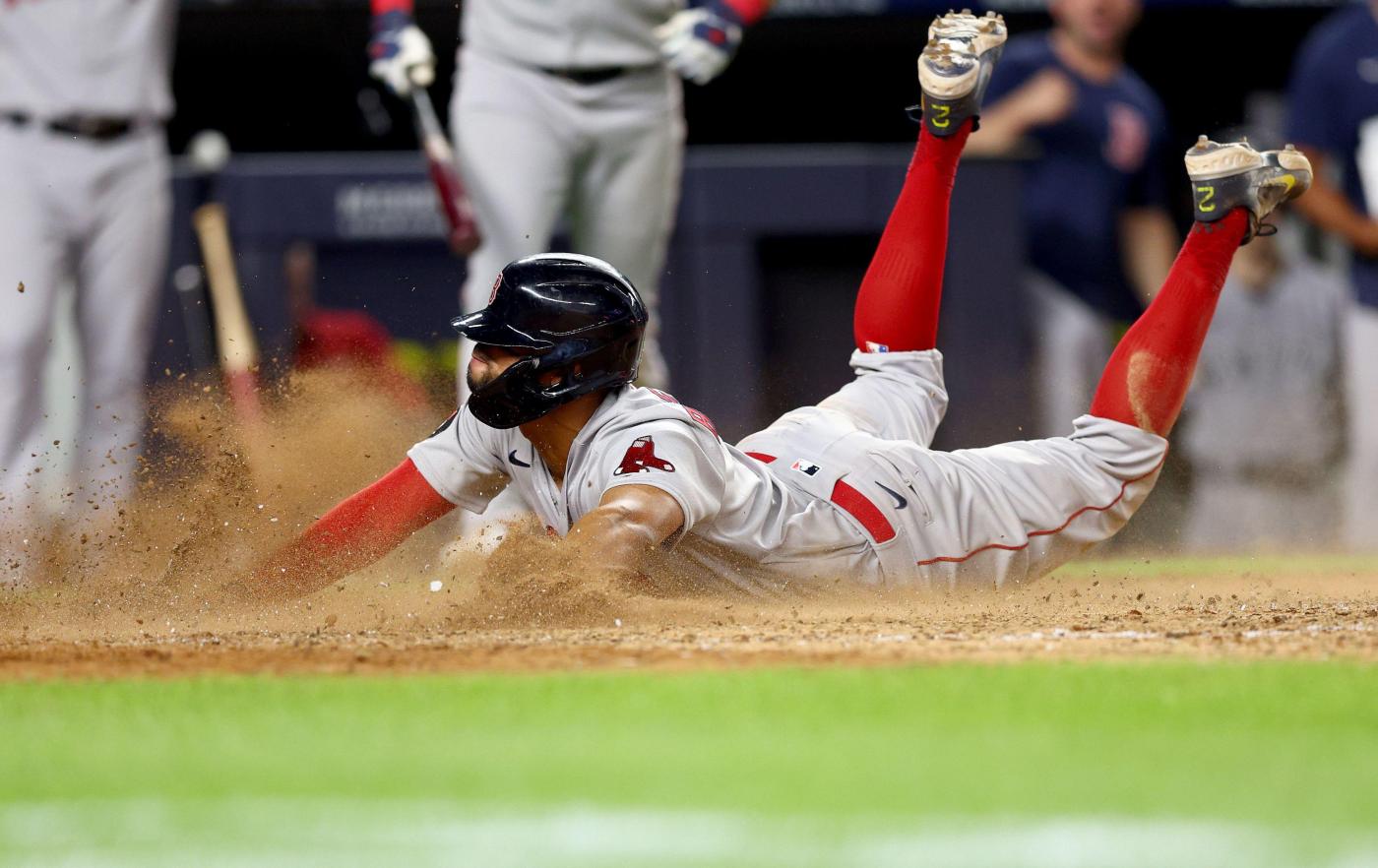 In one of the sillier games of the season, the Yankees could not take advantage of a ridiculously bad throwing error from Red Sox’s closer Tanner Houck, eventually losing 5-4 in 11 innings.

The game’s final innings saw Aroldis Chapman give up his third home run in his last nine outings, Aaron Boone get ejected from the dugout for chirping at home plate umpire D.J. Reyburn, and the game-tying throwing error that ended up only costing the Red Sox another hour or so at Yankee Stadium.

When Boone was ejected from the game in the ninth inning, he demonstrated the outward frustration that comes with greatness being challenged for the first real time all season. The call that got him booted was a pitch to Matt Carpenter that also came in a few notches below the knees.

Boston eventually won the game on a Michael King wild pitch with the dominant reliever needing just one more strike to end the top half of the eleventh.

The Yankees were dealt their death blow by Boston’s Ryan Brasier, who retired the side in the bottom half of the eleventh, punctuated by an Aaron Hicks swing that he couldn’t quite check.

If there was any doubt left, even a shred of uncertainty over whether Aroldis Chapman should be re-inserted into high-leverage situations, that is evaporating quicker than the team’s hold on the American League’s best record.

The Yankees’ frustrating loss on Friday was due in large part to Chapman’s suboptimal outing. Chapman, the Yankees’ erstwhile closer took over in the seventh, inheriting a tie game and facing the bottom of Boston’s order. The fifth pitch he threw ended up in the left field seats. Bobby Dalbec, the Red Sox’s all-or-nothing first baseman, went with the “all” approach against Chapman. On a 2-2 pitch, Chapman abandoned his trademark fastball and threw a slider at the knees.

That appeared to speed up Dalbec’s bat, and the swing it made sent the ball 391 feet, landing among Yankee fans who have grown to loathe the sight of their highest-paid reliever. Just to prove that he’s still got it, Chapman eventually got out of the inning by blowing a 100 mile per hour heater past Rob Refsnyder, three batters after opting for the slider that never came back.

Wandy Peralta and Clay Holmes — who have separated themselves from the pack as the best two relievers on the active roster — came next out of the pen and did exactly what Aaron Boone has come to expect of them. Neither man allowed a run, keeping the Yankees within range for a tying blow that didn’t come.

Fresh off the injured list, Red Sox’s pitcher Garret Whitlock skated through the seventh and eighth innings with a little help from Reyburn. The veteran umpire rang Judge up on a pitch clearly below the strike zone, kicking off a 1-2-3 inning that ended with a swinging strikeout of Giancarlo Stanton.

Long before that botched call, though, and Boone’s ejection and the rest of the late-game weirdness, the Yankees had ample opportunities to snatch this game from their urgent rivals. Making his first start in more than a month, Boston’s starting pitcher Nathan Eovaldi put runners on base in each inning he pitched. With the exception of a three-run bullet from Giancarlo Stanton in the third, Eovaldi also got out of jail in each of those innings.

The right-hander has always pitched fairly well against the Yankees in his career, and a gutsy 4.1 innings on Friday were enough to comfortably hand the ball to the bullpen and let them do the rest. Eovaldi finished his triumphant return with four strikeouts and three earned runs, all of which were supplied by Stanton’s home run.

Jordan Montgomery countered with a quintessential Jordan Montgomery line: six innings, six hits, three earned runs, four strikeouts, and not enough run support to get him or the Yankees a win. Montgomery would have been in line for at least a no decision, but Aroldis Chapman took that idea and chucked it in the Harlem River.

A 3-for-4 night from DJ LeMahieu, Stanton’s ninth dinger in his last 14 games against the Sox, and two more knocks for Matt Carpenter all went for naught. Things are still going to be fine in the Bronx, just as they’ve been all season, but it is admittedly strange to watch this team lose five out of six games.

It’s fitting that it took such a strange game for it to happen.