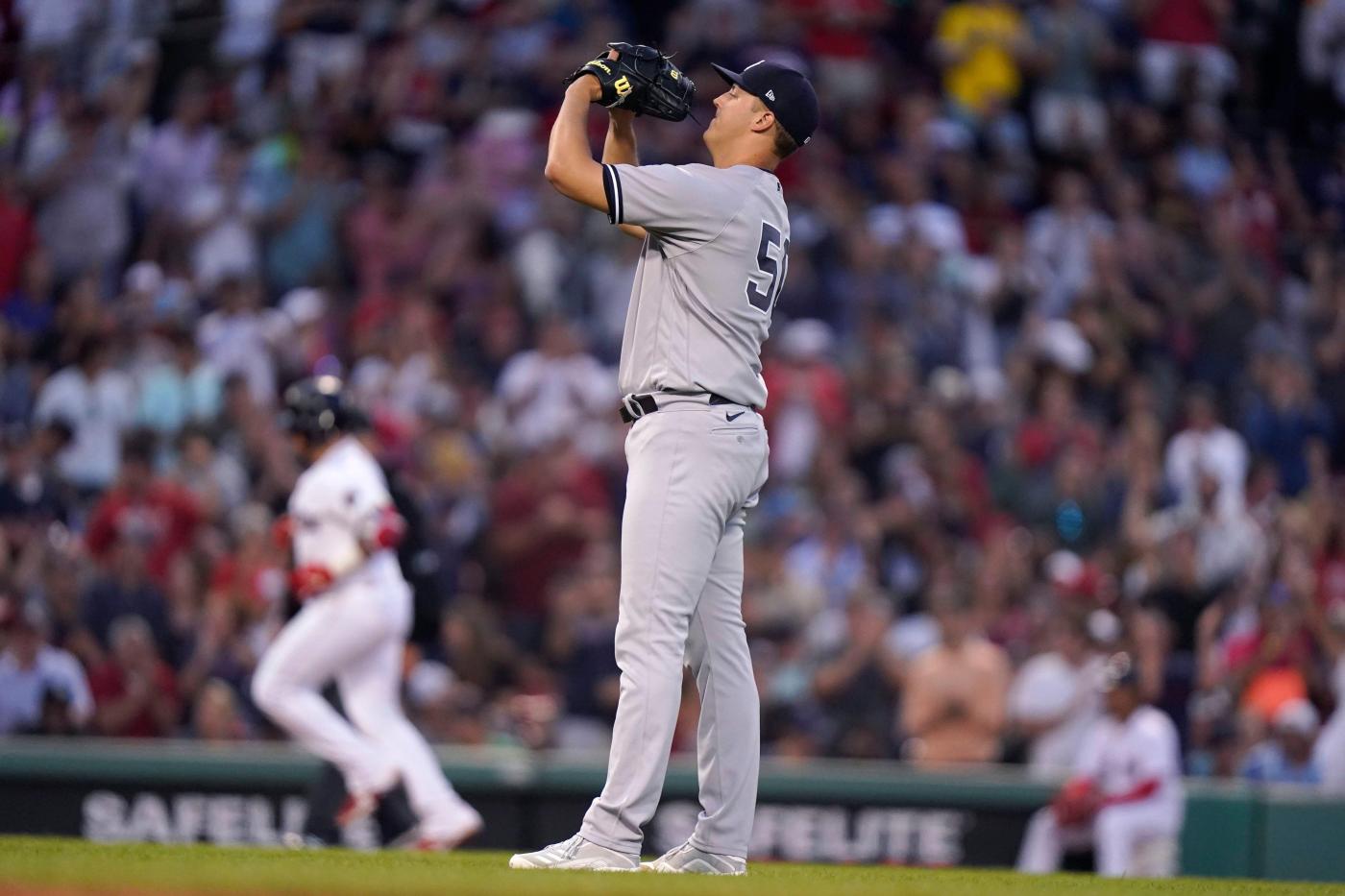 BOSTON — The Yankees left here Sunday night with a commanding lead in the division. That is the consolation after some sloppy Yankees play and concerning pitching had the Bombers blowing leads in games and in the series. The Red Sox rallied from four-runs down Sunday night to pull out an 11-6 win over the Yankees at Fenway Park.

The Red Sox (47-39) pulled out a series split after losing the first two games of this four-game set. It was just the sixth time this season the Bombers have lost back-to-back games and they dropped to 17-7 after a loss. Still, the Yankees (61-25) maintained the best record in baseball and left Boston with a 14-game lead over the Red Sox in the American League East.

“You win the first two so you want to finish off with a great series but credit to them,” Yankees manager Aaron Boone said. “They got behind again tonight and kept banging in and took advantage of some mistakes that we made. So it’s a little frustrating at the moment, but we’ll turn the page and go try to finish off the (first) half (of the season) in good fashion.”

The Yankees did not finish off this four-game series in good fashion.

Jameson Taillon continued to get burned by the long ball, allowing a career-high-tying three home runs as he blew the four-run lead he was handed on two-run home runs from Giancarlo Stanton’ and Matt Carpenter and RBI-singles from Isiah Kiner-Falefa and Jose Trevino. The Yankees bobbled the ball Sunday night with shortstop Kiner-Falefa and Albert Abreu being charged with errors and DJ LeMahieu, who seems to always come up with big plays, making two mistakes in the sixth inning as everything started to unravel.

Behind Aroldis Chapman, who is just trying to find his way back after spending five weeks on the IL, with the score tied Trevor Story led off with a “single,” when LeMahieu waved off Aaron Judge on a pop up to shallow right field. The ball was inside LeMahieu’s glove and rolled out, down his arm and dropped to the field.

Chapman then walked Franchy Cordero and Rob Refsnyder, before striking out Bobby Dalbec. Jeter Downs, who was pinch hitting, popped up to shallow center field and LeMahieu again took off after it . He waved off Aaron Hicks, but couldn’t get himself under the ball. It dropped off the side of his glove, allowing Story to score the go-ahead run.

“I’m thinking off the bat it’s a tough play. So you’re hoping that the outfielder gets a good read on it, but I don’t think on either of those plays the outfielders could have gotten them,” LeMahieu said. “So I think I was probably the only guy that had a chance.”

Chapman allowed a run on a hit and two walks. He struck out Vaszquez on a 101-mile an hour fastball to finish the inning.

Story pulled out the thread to completely undo the Yankee in the seventh with a three-run double off Miguel Castro. Cordero laid down a sacrifice bunt to score Story and reached on Albert Abreu’s throwing error.

Taillon blew the three-run lead he was handed early. He allowed six runs on seven hits and a walk over five innings. He struck out three and allowed a career-high tying three homers. It was the third time he’s allowed three homers in a game over his career. This was the first time since June 29, 2021.

Taillon gave up a two-run shot to Cordero in the second and a solo shot to Christian Vazquez in the third. He worked around an Alex Verdugo single in the fourth, but gave up an RBI double to Vazquez and a two-run shot to J.D. Martinez to tie the game.

Over his last four starts, Taillon has allowed 20 earned runs in 20.2 innings pitched.

“I’m kind of taking it on the chin right now I’m kind of in the Twilight Zone. I just keep saying the same thing. The same type of mistakes keep happening,” Taillon said. “Feels pretty bad. You get spotted a nice lead by the offense, they come out and attack and that should pretty much have guaranteed a win. I should go much deeper in the game.