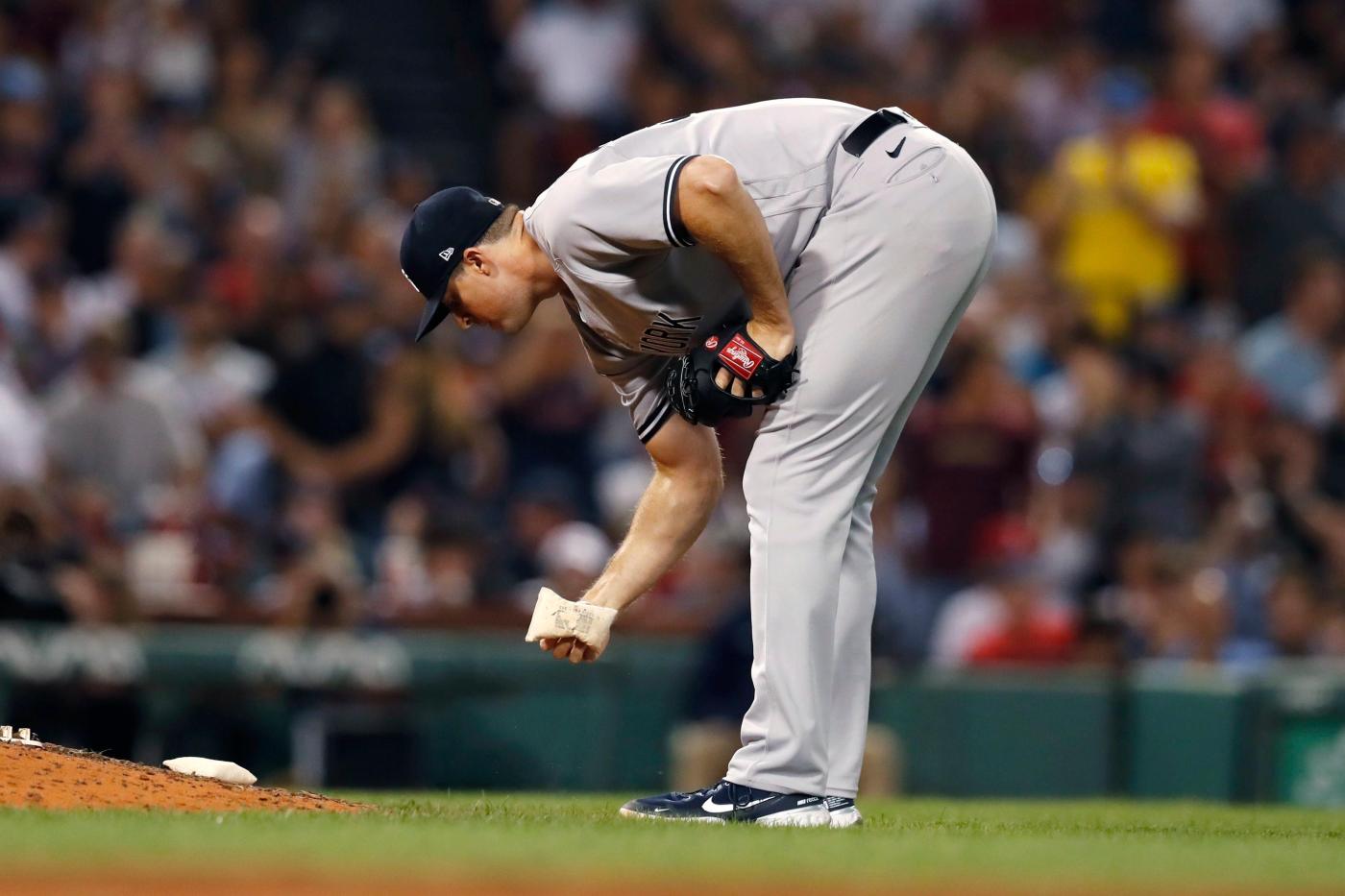 BOSTON — It was here a month ago that Clay Holmes was named an All-Star. The reliever had dominated through his first 38 appearances of the season and it was obvious that he (and his 0.46 ERA) would be making his first Midsummer Classic.

It was also here at Fenway Park that cracks began to show.

He took his second blown save of the year here on July 9 and since then things have been a roller coaster with him. In the 11 games he’s pitched since then, the 29-year-old has allowed 10 earned runs and walked nine.

When asked if Holmes is still his closer, Aaron Boone wasn’t enthusiastic.

“We’ll see. I mean I’m trying to get him in the best positions to be successful,” the Yankees manager said after the Yankees’ 3-2 loss to the Red Sox Friday night. “We’ll keep working to get him right and consistent.”

The Yankees have few options if they don’t.

Aroldis Chapman is waiting in the wings. He’s made eight straight scoreless appearances after a season and a half of struggles. The 34-year-old has been used very carefully since his return from the injured list, where he spent six weeks with an Achilles issue and working on getting his delivery ironed out. He has been used primarily against the bottom of the opposing lineup, against weaker hitters.

Jonathan Loaisiga, who had five saves last season when Chapman struggled, has been inconsistent this season. Their most reliable relievers aren’t here right now. Michael King is out for the season after fracturing his elbow and Ron Marinaccio, who had earned Boone’s trust for high leverage innings, is in Triple-A because of a roster numbers crunch.

Needless to say if the Yankees are to get out of their current downward spiral — having lost eight out of their last nine games, they have to get Holmes back to the dominant reliever he was — whether he pitches in the ninth or not.

Pitching coach Matt Blake said that he had seen signs of progress over the last week.

“There was a little spell there where the command was a little bit suspect with the sinker and you were seeing lower zone rates, lower strike grades, the slot was dropping a little bit. And then we just talked about just kind of narrowing up his base at the set and kind of getting him to just be a little bit more directional as well,” Blake said of Holmes.

Holmes is basically using too wide a stance before he went into his delivery and it is causing him to be “overly rotational,” which results in his pulling or yanking pitches out of the strike zone.

“Yeah, and a lot of times there was like an aggressive rotational move that was pulling them off line,” Blake said.

When Holmes is missing the strike zone it’s a real problem. That was his issue in Pittsburgh, where he had a walk rate of 17.9 in his rookie season. Falling behind in counts basically makes his sinker less effective.

“I feel like I’m pretty close. I’ve thrown a lot of close pitches and competitive pitches, but when I find myself behind in the count a lot, I’m not able to get them to put [the ball in] play and those walks have been hurting me,” Holmes said. “I think it’s just a matter of just getting back to what made me good and when I was doing that, I was being aggressive in the zone early and I think when I get ahead of hitters… they have to swing the bat and make some different decisions.

“And so I don’t know, I don’t feel like I’m far off but again, those walks, they’ve been hurting me. So this can’t happen.”